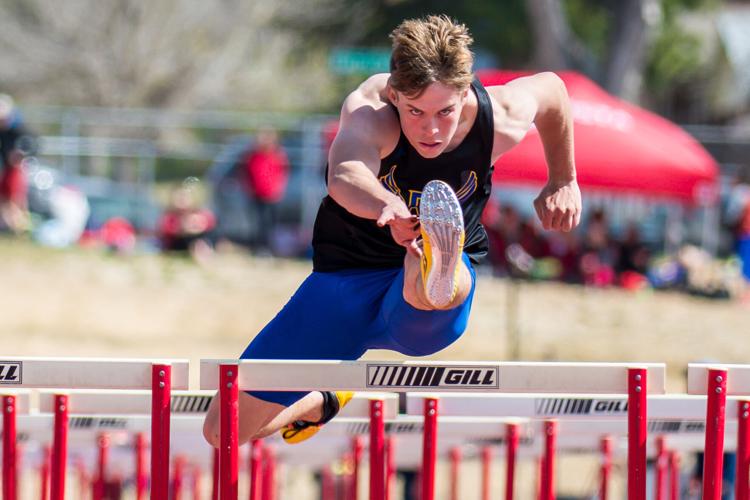 Rampart's Carsen Bruns competes in the 110-meter hurdles at Garry Berry Stadium during the Cougar Classic Invite on April 29. 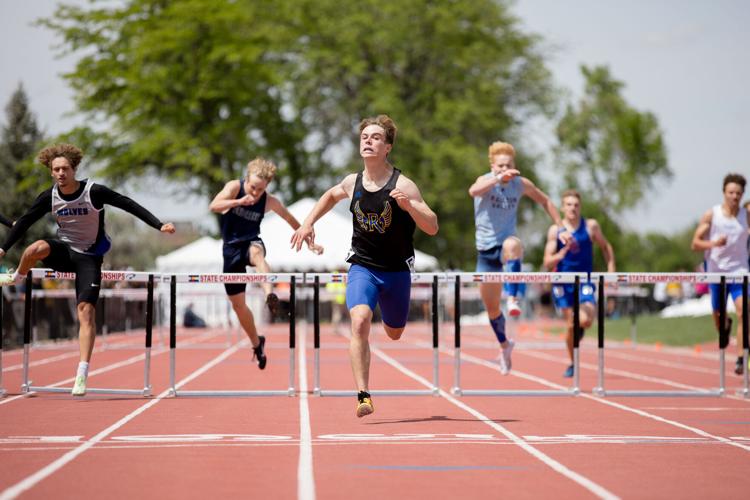 Rampart senior Carsen Bruns gives a final push to finish the 5A 300 hurdles at the track and field state championships Sunday, May 22, 2022. (Sara Hertwig for The Gazette)

Rampart's Carsen Bruns competes in the 110-meter hurdles at Garry Berry Stadium during the Cougar Classic Invite on April 29.

Rampart senior Carsen Bruns gives a final push to finish the 5A 300 hurdles at the track and field state championships Sunday, May 22, 2022. (Sara Hertwig for The Gazette)

Carsen Bruns is an athlete formed by adjustments.

When he was a tad introverted for football, he switched to just track. Later on when COVID-19 hit, right after Bruns had moved to run hurdles, he spent the summer leaping on his own to get better.

As a senior, with the weight of expectations and a team looking up to him, Bruns even escaped his usually quiet tone for a leadership role — embracing his teammates and the lessons he could teach them en route to a pair of state titles and becoming this year's Peak Performer.

"This was the first year I just didn't stop," Bruns said. "I pushed through the winter season and into the spring and just never stopped.

"This has become such an outlet for me. It's really a part of me now, so when I'm not doing it, I'm just not the same."

Bruns' running career started where his high school stint ended. As a part of the Landsharks Running Club, he practiced on Rampart's track.

Originally, he had a dream to run the 400-meter dash and become the best at it. When a coach suggested hurdles early on as a Ram, Bruns accepted the assignment as another way to engrain himself in the team and get closer to being its go-to for the 400.

"I was the 400-meter guy for a long time before Rampart," Bruns said. "I loved when people would say that was the hardest race, and I could say I was the guy doing it.

"I used to do the race, then get so many blisters that I couldn't do anything else. I figured hurdles would just be because I was a freshman, and it never hurts if a college sees you can do multiple events."

So Bruns started leaping, and it wasn't long after he stopped hitting. He was originally a football and track athlete but chose to step away from football.

As much as he loved being around friends, the sport didn't entice him the way winning track medals did. Moving to a narrowed focus allowed him to determine wins or losses, based only on himself — that is, him and a solid unit pushing him in the form of his pair of track coaches and parents. Though they don't have a lot of experience in track, his parents were always there to support his goals.

When he left the Rampart coaching staff during the canceled track year, the difference upon his return was noticeable.

"We had a whole year of not seeing him, and he was just working with his club coach," coach Grant Stoughton said. "He and other kids would go out to the Rampart track and just work. We weren't allowed to be around them, so they all put it upon themselves."

It was the start of a leadership role.

Bruns, alongside fellow Rampart standout senior Sebastien Jean, formed a leadership duo based on their own tight relationship. Even in the hallways, they started to mirror each other's energy.

"He just became great at bringing everyone together," coach Andrew Koziuk said. "When things didn't go his way this year, he was right there with his teammates, and his goal was to qualify as many people as possible.

"It was huge for the underclassmen who looked up to him. They got to work with him, and we'll see the results of that even next year and the years after."

Bruns ended the season on a high, capturing the 5A title in both the 110-meter and 300-meter hurdles with the fastest times in the state, regardless of classification.

He'll head to Colorado State, where he may be back as a 400-meter standout or stick with hurdling — he proved to be pretty good at it.

Either way, the intensity Bruns brings to winning will determine his fate. And he certainly doesn't have any doubters on the corner of Lexington and North Union.

To characterize Mesa Ridge's Janise Everett as a natural talent would be doing her a disservice.