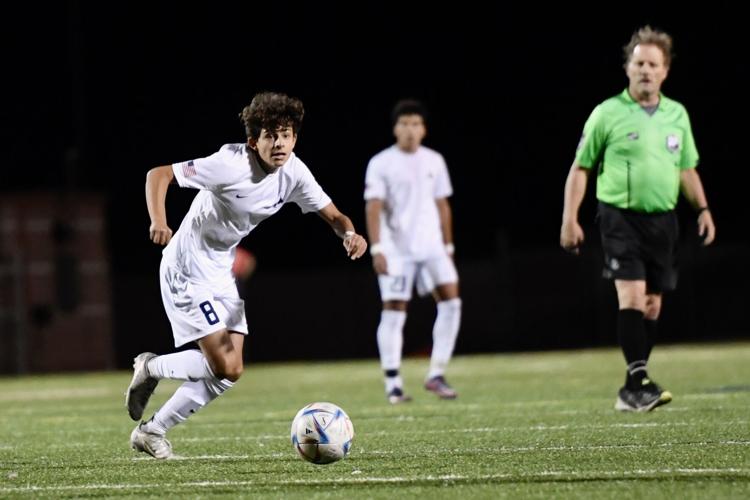 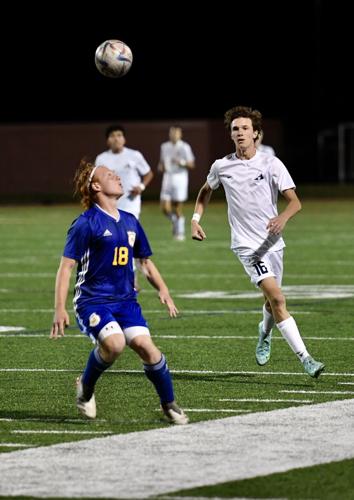 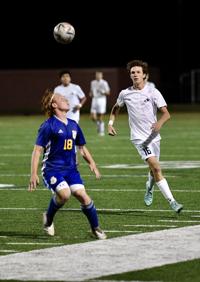 Rampart's Nick Whorton and Air Academy's Aiden Kranz go after a ball in the air on Tuesday, Sept. 13, 2022. 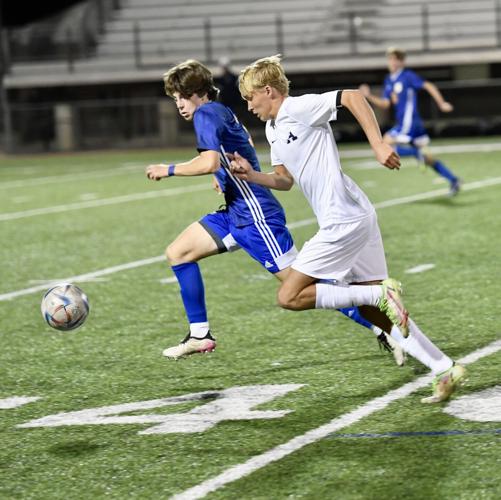 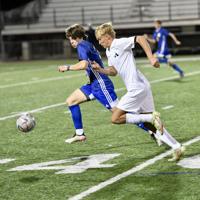 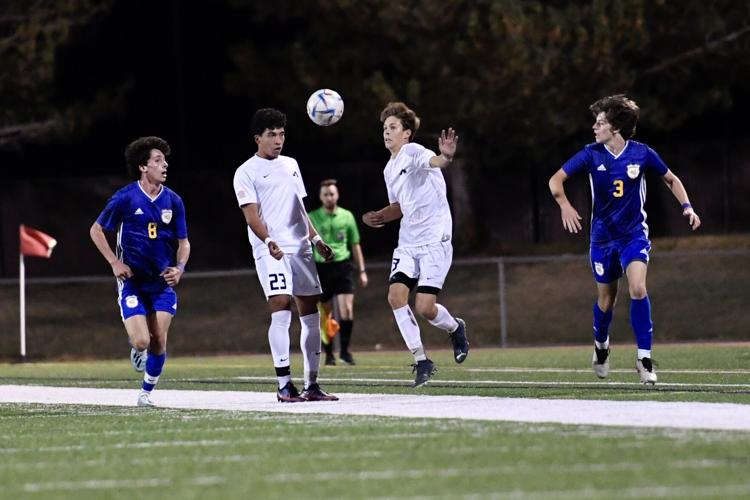 Air Academy's Julian Gallegos and Peyton Blair try to clear a ball out of their own territory on Tuesday, Sept. 13, 2022.

Rampart's Nick Whorton and Air Academy's Aiden Kranz go after a ball in the air on Tuesday, Sept. 13, 2022.

Air Academy's Julian Gallegos and Peyton Blair try to clear a ball out of their own territory on Tuesday, Sept. 13, 2022.

The Kadets welcomed in junior Aidan Kranz from South Carolina before the year, and changed their formation Tuesday, to boot, en route to a 2-0 win over Rampart at D20 Stadium.

He scored the second of the team's goals, with sophomore Andrew Foster notching the other in the first period to even out the team's scoring in each half.

It wasn't until midway through the first, when Air Academy coach Espen Hosoien switched the Kadets to a 4-3-3, that they truly started to fly.

"We don't typically play that formation, but it created more space for us to attack behind," Hosoien said. "We made the switch and it worked, because we scored quickly after. Sometimes, we have to play with what the other team gives us."

The ability to adapt has worked for Air Academy this year.

Through six games, the Kadets have only one loss — a 2-1, second-half-led loss to Golden.

The forwards have learned to roll with the alterations and be a beacon of support for the defense. When Rampart controlled possession through most of the first half, the strikers for Air Academy just continued to help where they could, aiding a back line that, despite being pressured, ceded only a handful of shots on the senior keeper, Owen Sutherland.

On the rare occasion when Sutherland needed to make a play, he did, including a full extension save to keep the Rams scoreless.

The pressure started to fade after Kranz's goal in the 44th minute. A one-goal lead is a coin flip, while double the margin gives some room to breath.

"When you have a two-goal lead, you can't let off the gas, but it gives motivation," Kranz said. "You want to keep going and keep that clean sheet."

The second goal came in traffic. Off a corner kick, the Kadets kept the ball near the net and eventually scored from inches away.

Kadets again here, this time with traffic in front of the net, and Aidan Kranz punches it in. Air Academy up 2-0 with 36:42 left #copreps: pic.twitter.com/7OxJJ0wf4q

Putting pressure on a defense spurned the initial formation change. Hosoien constantly encouraged his offense to keep possession early on, but the passes and lanes to advance the ball were closed by Rampart's defense.

The change was a counter, and instead of going back at halftime, he doubled down, staying with it for the final 40 minutes, too.

As much as things changed throughout the win, it was also a constant that aided the Kadet run.

A little of both is always healthy.

"This team's start has been driven by Rider (Grow). He's been a great leader and captain for us," Foster said. "Coach is really pushing us in practice too and it's helped us a ton. We just want to keep going."

Liberty football pulls through in overtime win over Sierra, lets emotions out in first victory since 2020

Chris Hunter stood on the field, tears streaming down his fatigued face, skin tone as red as Liberty's home jerseys.