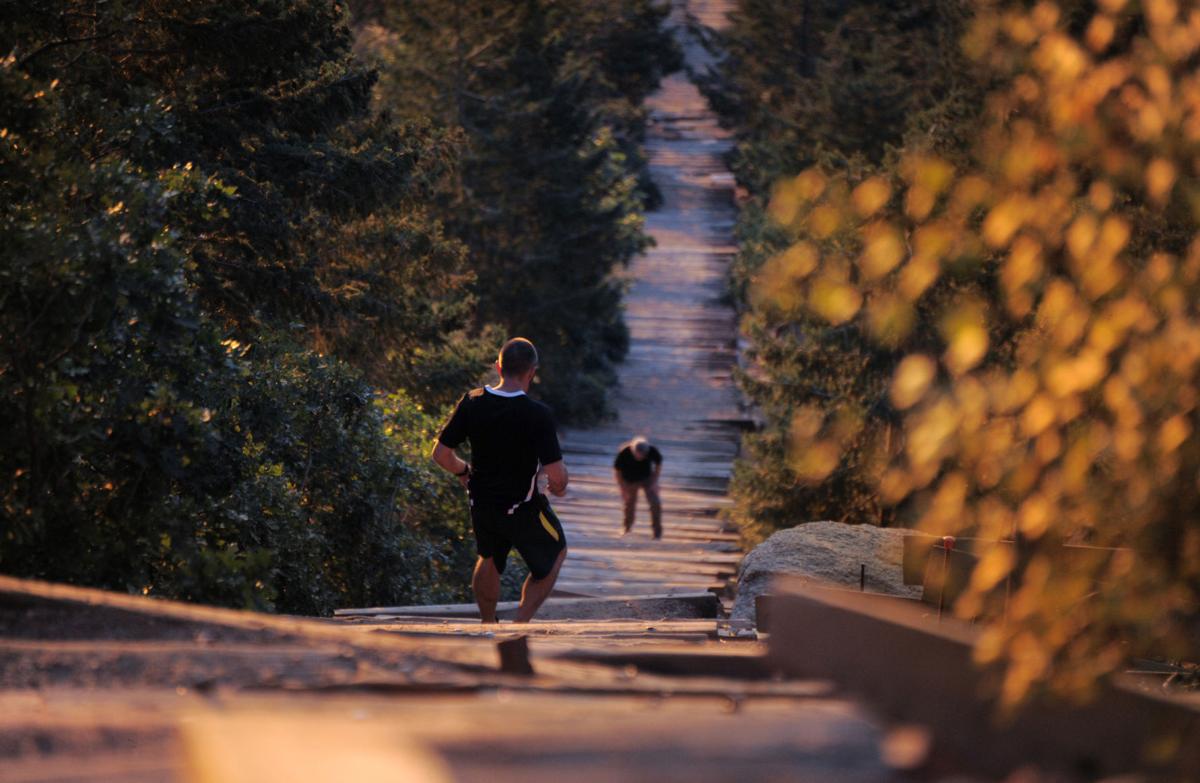 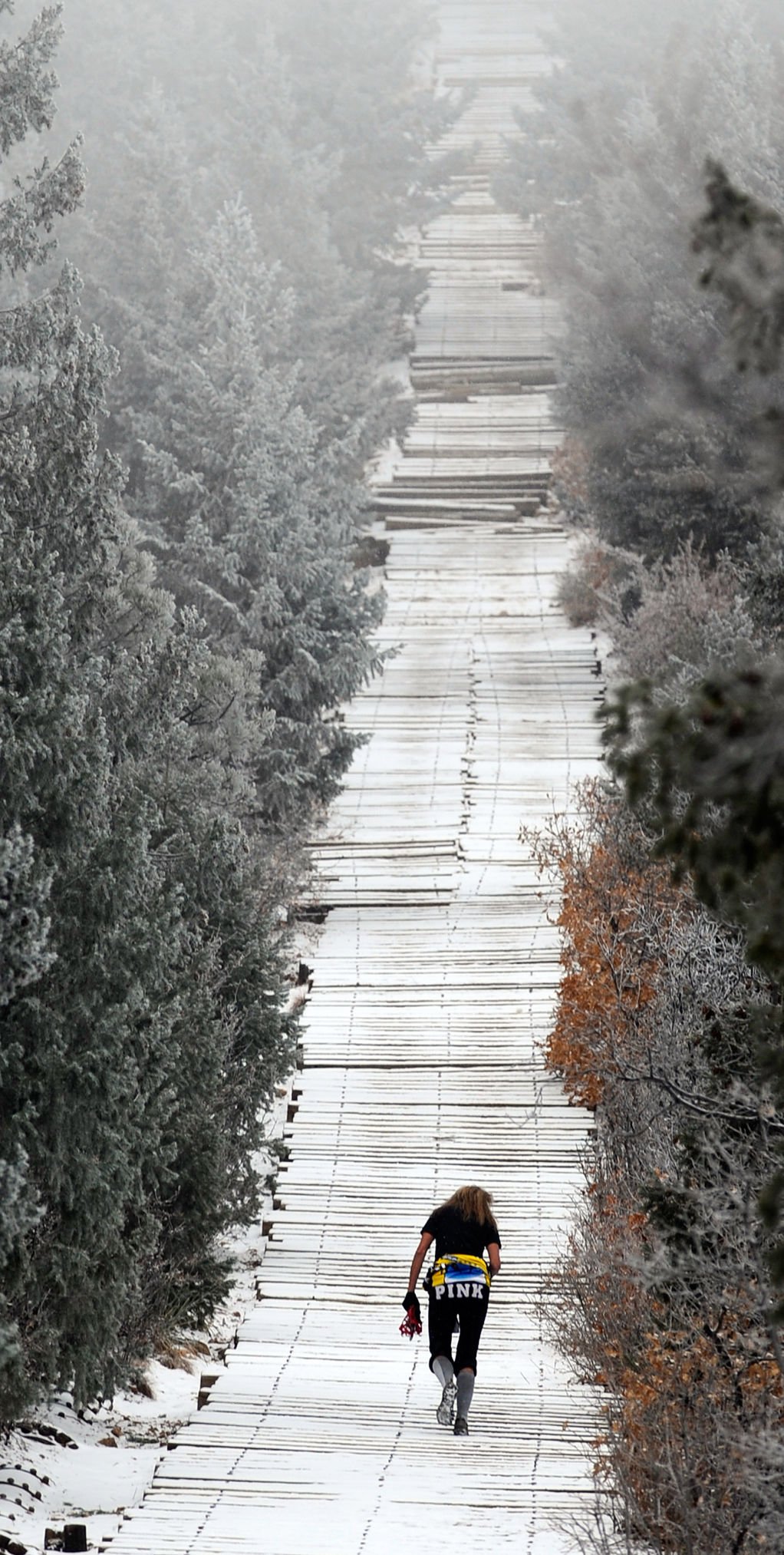 Jill Suarez hikes into the clouds while climbing the Manitou Incline Friday, Feb. 25, 2011, in the snow. Suarez said she's been climbing the Incline since the railroad tracks were removed in the early 1990s and takes pictures, send texts and checks the internet while making the 2000-foot ascent. ( The Gazette, Christian Murdock)

Jill Suarez hikes into the clouds while climbing the Manitou Incline Friday, Feb. 25, 2011, in the snow. Suarez said she's been climbing the Incline since the railroad tracks were removed in the early 1990s and takes pictures, send texts and checks the internet while making the 2000-foot ascent. ( The Gazette, Christian Murdock)

As Jerry Retherford struggled to breathe on the unforgiving steps of the Manitou Incline six years ago, he wasn't alone. There, by Retherford's side, was Jill Suarez, holding his hand as they waited for medical assistance. But it was too late. The 61-year-old, who had climbed Mt. Kilimanjaro the previous year, died roughly 400 feet from the summit.

"I'll never ever forget that - the sound of his breathing and the way he looked," Suarez said. "Nobody wants to see anybody die."

If anyone knows the potential dangers of the abandoned cable car track, it's Suarez.

"I've seen it all happen; I know the risks," she said. "The Incline is in a class of its own in terms of rescue because it's so vertical."

She also knows the thrill. Nicknamed "Incline Bunny," Suarez has each wooden railroad tie, gravel patch and rebar piece nearly memorized from years of hiking it almost every day.

Still, she worries about people getting hurt - and with good reason. So far in 2015, there have been nine search and rescue missions on the Incline, according to El Paso County Search and Rescue. In 2014, despite a three-plus-month closure of the Incline for repairs, search and rescue teams ran 19 missions there. That's up from 16 in 2012.

Patrick Kerscher, operations director for El Paso County Search and Rescue, said the group's "busy season" is from Memorial Day to Labor Day, when warmer weather brings more visitors to the steep trail, with a peak in July.

"It's usually lower extremity issues like ankles or legs being sprained," Kerscher said. "There's lots of slips, trips and falls. No matter how prepared you are, most of what we see is based on accidents. This hike is a serious undertaking."

In a county packed with dozens of scenic, often difficult trails, 34 percent of search and rescue calls have been for the Incline or Barr Trail in 2015.

In 2012, Vanessa McMichael, 58, died of cardiac arrest while hiking the Incline. She was a P.E. teacher and two-time finisher of the Pikes Peak Ascent, a 13.32-mile running race from Manitou Springs to the top of America's Mountain. This month, 63-year-old Richard Dakin died on Barr Trail. And on Saturday, a male hiker suffered heat exhaustion near the top of the Incline and was driven down a fire road to receive medical attention.

"The bad things happen usually right in the spike of the hot, hot weather, and it just seems like we can do something about that," Suarez said.

On nearly every "things to do in Colorado" list, you'll find the Incline - with its 2,000 feet of elevation gain over the course of a mile topping the headlines. Local runners rave about the workout, comparing mile times that reach 20 or 30 or 40 minutes. The mantra has become: When in the Springs, do the Incline. And, with a wink or whisper, see if you survive.

"It's been held up to the whole wide world that this is the place to go," Suarez said. "People come do it because they hear about the challenge, and then they still take it very lightly."

Ryan Johnson, president of advocacy group Incline Friends, has seen the spike of crowds grow since the Incline became a legal and public trail two years ago.

"Too often people hear from friends and on social media or whatever about how much they love the Incline and how voracious people are about it, so they're eager to try it," he said. "They soon realize it's not just a walk in the park."

Before first-timers try it, Johnson tells them it's OK to stop and turn back.

"There's this stigma against stopping or turning around without making it to the top," he said.

On average, the Incline is climbed 616 times on a weekday, 5,174 times a week and 21,991 times a month, according to a trip counter buried under the trail by the city of Colorado Springs in July 2013.

There are those who know what they're doing, those speedy-moving legends such as Suarez's boyfriend, Roger Austin, who often traverses the Incline seven or eight times in a day.

And then, it seems, there's everybody else.

"I've seen a lot of close calls," Johnson said. "People just look like they're out of breath. Granted, everybody is out of breath on the Incline, but they're just obviously in pain and they can't quickly recover."

Suarez thinks hikers should have to sign a waiver at the bottom, or there should be more warning signs posted to take Barr Trail down, or water stations set up or maybe safety classes. She wants something.

"There must be something done," she said. "I'm tired of these things happening."

"So many people think they're invulnerable and just chuck up the Incline without thinking about what could happen," he said.

To him, no matter how much he loves Manitou's one-mile high, there's a bottom line.

"You need to know your limits," Johnson said. "There's a lot of dangerous situations where people can fall. And if you fall on the Incline, you could be falling for a while."