Scientists across the globe are furiously working to come up with a COVID-19 vaccine.

But when they do, will anybody get it?

According to a poll released last month from The Associated Press-NORC Center for Public Affairs Research, 49% say they’ll get vaccinated, 20% say no thanks and another 31% are fence jockeys. 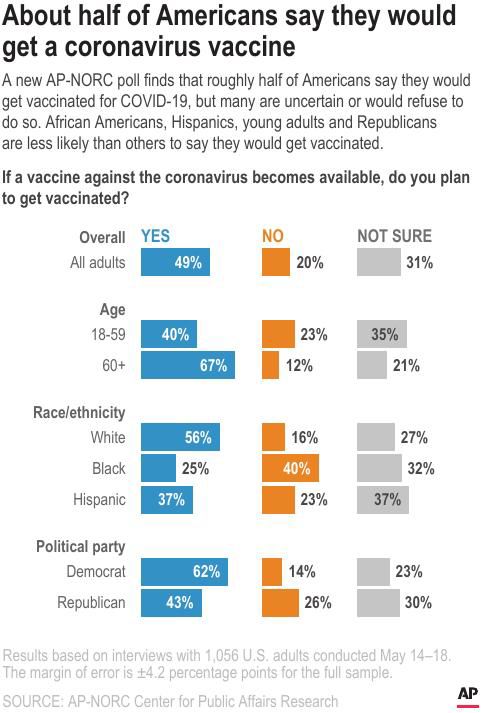 The same poll found 67% of people 60 and older say they’d get vaccinated, compared with 40% who are younger.

Meanwhile, a 2019 survey by the National Foundation for Infectious Diseases found that 52% of respondents planned to get a flu vaccine that season.

Where do you stand? In a very informal poll conducted by yours truly via Facebook, Twitter and busy neighborhood hub Nextdoor, responses from Pikes Peak region folks fell into four categories: Absolutely; “Not over my dead body,” as one person wrote; Eh, maybe? Who can say? All the world is in flux; and the ol’ guinea pig response, as in I’ll let everybody else belly up to the syringe first, and if they don’t keel over, I’ll probably get it.

Hey, AP, I’m not sure who you polled, because the vast majority of responses I received landed solidly in the pro-vaccine camp. Those were followed by a much lesser number of heck nos. There were only a few maybes, and a slightly larger number of wait and sees.

“My uncle was the very first known case of polio in the state of Colorado,” writes Douglas Monroy. “This was about 1923 and it eventually cost him his life. His sister, my mom, made sure that I was one of the very first kids in LA County to get the polio vaccine (1955). I’d get the COVID-19 vaccine for sure. The first ones to get it, though, should be health care workers, people in meat processing plants, nursing homes and other hot spots.”

The pro-coronavirus vaccine responses poured in. And, as one might expect, the anti-COVID-19 vaccine bunch aren’t wishy-washy about their feelings. Raj Solanki is adamant about not getting poked with a needle.

“I would rather build immunity the way the body does naturally,” he writes. “I never get the flu vaccine either. Coronavirus vaccine has been tried for years without success, and now, all of a sudden, they are going to figure one out, without any double blind studies, with total legal immunity for vaccine manufacturers. No thank you!”

Allison Nichols, a nurse who works at the El Paso County jail, isn’t anti-vaccination, but she is now a diligent reader of ingredients in vaccines and other materials. Two events prompted that practice: being diagnosed with stage four metastatic breast cancer in 2014 and also after her 4-year-old son received eight vaccines at one time and had a “massive vaccine reaction,” she says.

“After that he was diagnosed with Tourette (syndrome),” says Nichols. “When I looked at the ingredients there was aluminum, which is extremely toxic, and formaldehyde. There are aborted fetuses in some of these vaccines. That is an ethical dilemma for me. Most people don’t look at the material safety data sheet.”

Nichols is concerned the rush to develop a vaccine will cause safety to be overlooked. And when it does arrive, she’ll parse its ingredients before partaking.

“Before getting the vaccine, see if you have the antibodies,” she says. “Just because you get the vaccine, there’s no guarantee you won’t get it (COVID-19). The emphasis should be put on prevention. Are you eating junk or crap? Taking care of yourself? Are you getting vitamin D? It’s hard to get sick if you have enough vitamin D.”

In an AP story about the recent poll, Dr. Francis Collins, who directs the National Institutes of Health, sought to reassure those who might harbor some distrust in vaccine creation. The AP reports the NIH is developing a master plan to test leading vaccine candidates in tens of thousands of people to see if they work and are safe.

“I would not want people to think we’re cutting corners because that would be a big mistake. This is an effort to try to achieve efficiencies, but not to sacrifice rigor,” says Collins. “Definitely the worst thing that could happen is if we rush through a vaccine that turns out to have significant side effects.”

Some believe in the aforementioned due diligence of scientists. Jenny Maloney is Team Scientist.

“Some of the finest minds in medicine are working collaboratively on an unprecedented global scale,” she says. “There is no doubt in my mind the research going into coronavirus will yield not only an effective vaccine, but also potential treatments that can be used for other diseases. I only wish they were given more support, the way a vaccine for polio was supported.”

Others, including Britiany Deaton, are in no rush.

“I would be skeptical of a vaccine that only took a year to make and test,” she writes. “Maybe it’s taking less time because it’s a global effort, but most vaccines can take 10-15 years to ensure there are no adverse effects to the general public or to a specific community of people.”

As for me, I’m in flux. I was one of those hard nos about putting anything foreign into my body, including the flu vaccine. I’ve had one that I can remember, back in college. After I passed out in the hallway afterward, I spent some time recovering in an exam room. But that’s not the only reason I don’t get them. I don’t want a vial of “toxic soup” injected into my body (An evocative phrase I’ve stolen from a former colleague.) I work hard to keep my body and immune system healthy, and I don’t want to upset the happy balance I’ve had going on for years.

However, I received an email from John Williams Sr., who found me through Nextdoor. The occupational medicine and public health physician also is a retired Navy medical officer who has run international travel clinics for military members and civilians. He’s traveled the world and been the recipient of what sounds like dozens of vaccines, including yellow fever, typhoid and anthrax.

“I get why people are afraid — all vaccines have risks associated with them and they are not 100 percent protective even when you do get them,” he wrote. “I have always weighed the risks and benefits of the vaccines before taking them, as I will when the COVID vaccine comes out (hopefully soon). The FDA has stringent requirements before they will release a vaccine, so that gives me some confidence as well. People need to keep an open mind about this.”

If I were to pack my bags tomorrow and head out into the great unknown, I would likely get whatever vaccine was required to roam about the world. And that gave me pause. Why would I get those vaccines and not one for COVID-19? Food for thought, people. I do know this: I will indeed research what’s in the vaccine and then sit back and see how it plays out in the big, wide world. And if I do get jabbed with a needle someday, I hope somebody’s there to catch me when I fall.

Live Well: To garden is to learn many lessons

Gardening can mirror life. You've got to water and weed relationships.