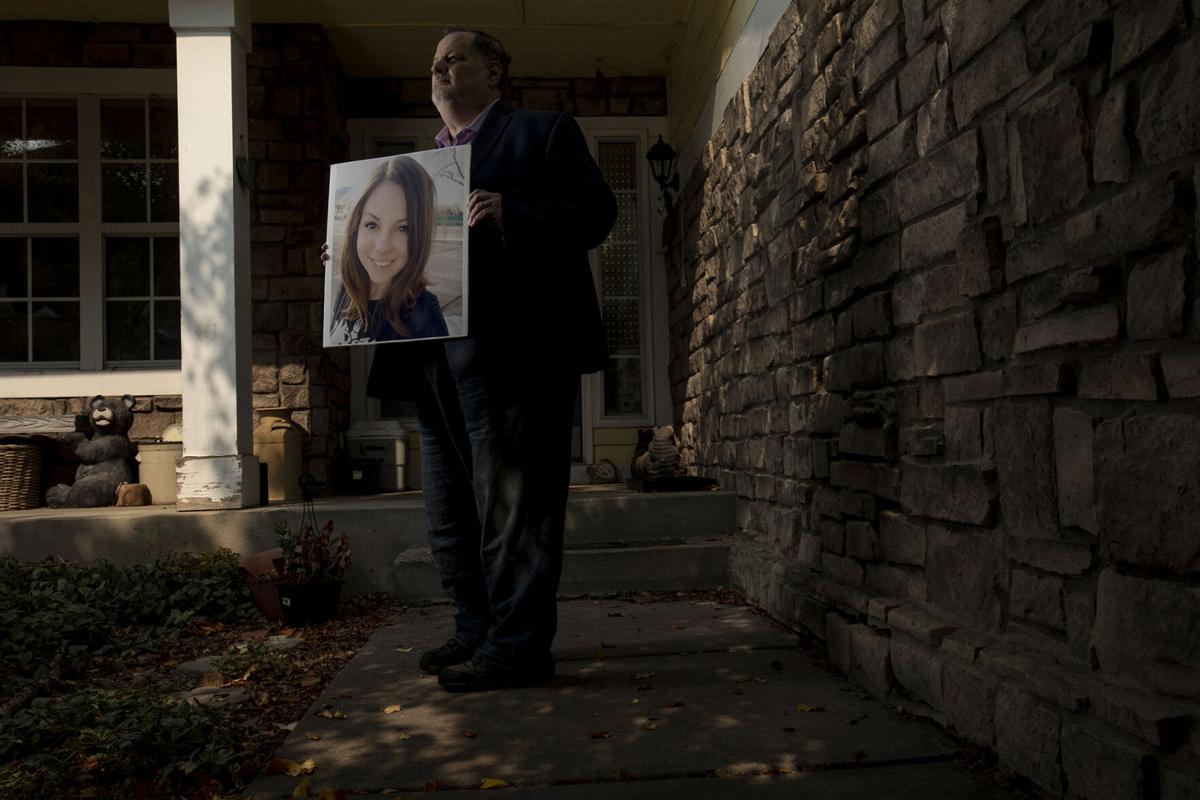 Leon Wittner holds a photograph of his daughter Sara Wittner outside his home in Broomfield, Colo., on Friday, Sept. 18, 2020. Wittner lost his 31-year-old daughter to a drug overdoes on April 16th, the day before her appointment for a Vivitrol shot. Sara was on a routine to get the injection every 30 days, but when the coronavirus struck, her father said, scheduling became problematic. Her April appointment for a Vivitrol shot was pushed out an extra 15 days. (Chancey Bush/ The Gazette) 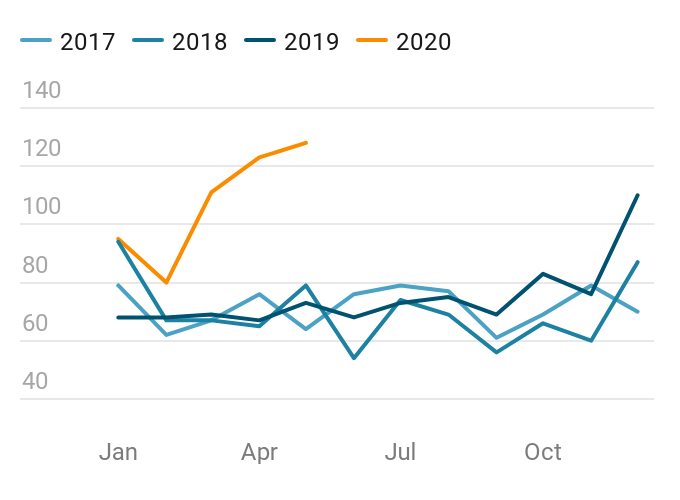 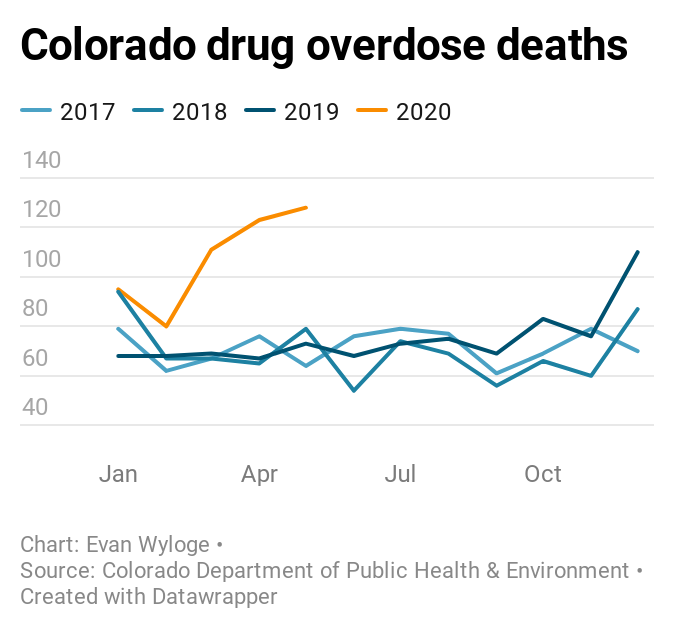 Leon Wittner holds a photograph of his daughter Sara Wittner outside his home in Broomfield, Colo., on Friday, Sept. 18, 2020. Wittner lost his 31-year-old daughter to a drug overdoes on April 16th, the day before her appointment for a Vivitrol shot. Sara was on a routine to get the injection every 30 days, but when the coronavirus struck, her father said, scheduling became problematic. Her April appointment for a Vivitrol shot was pushed out an extra 15 days. (Chancey Bush/ The Gazette)

Drug overdose deaths in Colorado began to climb in March, with the full onset of the coronavirus pandemic, and continued to surge through the spring.

By May, according to state health department data, the number of drug overdose deaths reached nearly twice the average from recent years. In May, 128 people died of overdoses in Colorado, compared to 73 in 2019, 79 in 2018 and 64 in 2017.

May is the last month for which data are fully tabulated, but Carl Clark, a physician and president and chief executive officer for the Mental Health Center of Denver, said the pattern of overdose deaths is likely to get worse.

“There's the sort of pandemic wave of COVID-19,” Clark said. "But there is this second wave that happens later of the impacts of all the stress of that (first wave) on people's well-being. We're already seeing that and it will only get bigger.”

The trend is predictable, Clark said.

“There are certain things that we know that happen with a stressful event like a pandemic or 9/11 or if the stock market crashes,” Clark said. “Anxiety goes up, depression goes up, suicides go up, and people's use of substances goes up.”

That was the case for Sara Wittner.

In her 20s, Wittner struggled with addiction. During a nine-day stay in the hospital in 2010 fighting a deadly bacterial infection, doctors gave Wittner morphine intravenously. By the time she beat the infection, she was addicted.

“She said that when she left the hospital she thought that the pain medication should make all the pain go away and she should have felt like she felt when she got IV morphine,” Leon Wittner, Sara’s father, said.

From that point, Wittner's addiction led her from prescription drugs to pain pills off the street, to heroin. Eventually, she lived on the street.

“There was a time when we had to use really tough love with Sara before she went to Stout Street,” Leon Wittner said. “We couldn't let her be in our house.”

It was there, when she was most desperate, that Wittner found the Stout Street Foundation — an in-patient rehabilitation program, where she spent two years working through an intensive recovery program. She managed to keep sober for more than three years after graduating from the program in 2017.

By 31, Wittner was looking forward to her wedding, planned for September, and living with her fiance in Denver, with a stable job as an executive assistant for the CEO of a health care consortium.

Hardship struck again. Her mother was diagnosed with ovarian cancer and her fiance’s father died.

Wittner was on a routine to get the injection every 30 days, but, when the coronavirus struck, her father said, scheduling became problematic. Her April appointment for a Vivitrol shot was pushed out an extra 15 days.

The day before her appointment, Wittner died from a drug overdose.

As the pandemic added stress for those in recovery, outreach programs, and medical providers struggled to help. In-person meetings were limited and state funding was cut.

In Colorado, substance use treatment and prevention services, behavioral health services as well as integrated community-based mental health services took a $20 million cut in funding as the state tax revenue plunged in amid the coronavirus the pandemic.

Natural Highs, a program in Boulder aimed to help teens with addiction and find alternatives to drugs, lost its funding after city budget cuts.

Avani Dilger, the Natural Highs founder and executive director, said the program, which serves over 2,000 teens and families a year, lost all of its volunteer staff.

Dilger said she is determined to make the program work by looking for funding in new places, including online donations.

Stout Street Foundation was more fortunate during the pandemic because it doesn’t rely on state funding. But that didn’t deliver immunity from the pandemic.

The Foundation’s primary program is a therapeutic community where 100 participants live and work together.

In February Stout Street went under lockdown. The facility barred visitors and the staff allowed into the residential facility was limited to clinical providers. It remains in virtual lockdown.

Loneliness and boredom, often factors that lead to addiction, is a big challenge, Carrie Packard, the foundation’s development director said.

“Normally September is the best month because you get to do so much more stuff,” Packard said. “We go to Elitch’s, the haunted house when it opens at the end of the month, we go there. But it's hard because those are just — they're off-limits right now.”

Mind Springs Health, which serves 10 counties on the Western Slope, has managed to transition many addiction clients over to telehealth and online meetings during the pandemic.

“I'm thrilled to say that our clients really did not drop out but continue to be able to hang in there and do calls virtually,” Raggio said

Mind Springs also plans to launch the Circle Program this month — a residential program for recovery that’s an alternative to incarceration.

Raggio worried the state would defund the program because it was still in its infancy. But the program managed to keep its funding due to the broad geographic area it serves.

Other residential programs across the state were not as consistent, as the state delayed payments for Medicaid programs that would cover in-patient and residential treatment for drugs and alcohol addiction.

“The fact that this benefit didn't come around, it was hurtful, it hurt these folks in terms of not being able to get started,” Esquibel said.

More money is now on the horizon.

The state Office of Behavioral Health will receive a $41.6 million federal grant over the next two years to tackle the opioid crisis.

“This crisis continues to move rapidly, especially now with the conditions of social and personal stress brought on by the COVID-19 pandemic,” Esquibel said. “The new federal State Opioid Response funding is very welcome and is the largest pool of funds dedicated to addressing the impacts of the opioid crisis in Colorado.

“We still have as much as a decade of work ahead of us in bending the arc of the opioid crisis.”

For families such as the Wittner's, the infusion of funds and new efforts against addiction come too late.

Leon Wittner doesn’t try to hide the truth of his daughter’s death. He’s vocal about the fact Sara died of an overdose, he wants people to know her story, because that’s how she lived her life — sharing her experience with others.

“Sara said, ‘The more people I share it with, maybe others are willing to share their story too,’” Leon Wittner said.

Drug overdoses just one example of 'excess deaths' during pandemic

Drug overdoses aren’t the only cause of death that have spiked since the beginning of the spread of the novel coronavirus. The number of death…