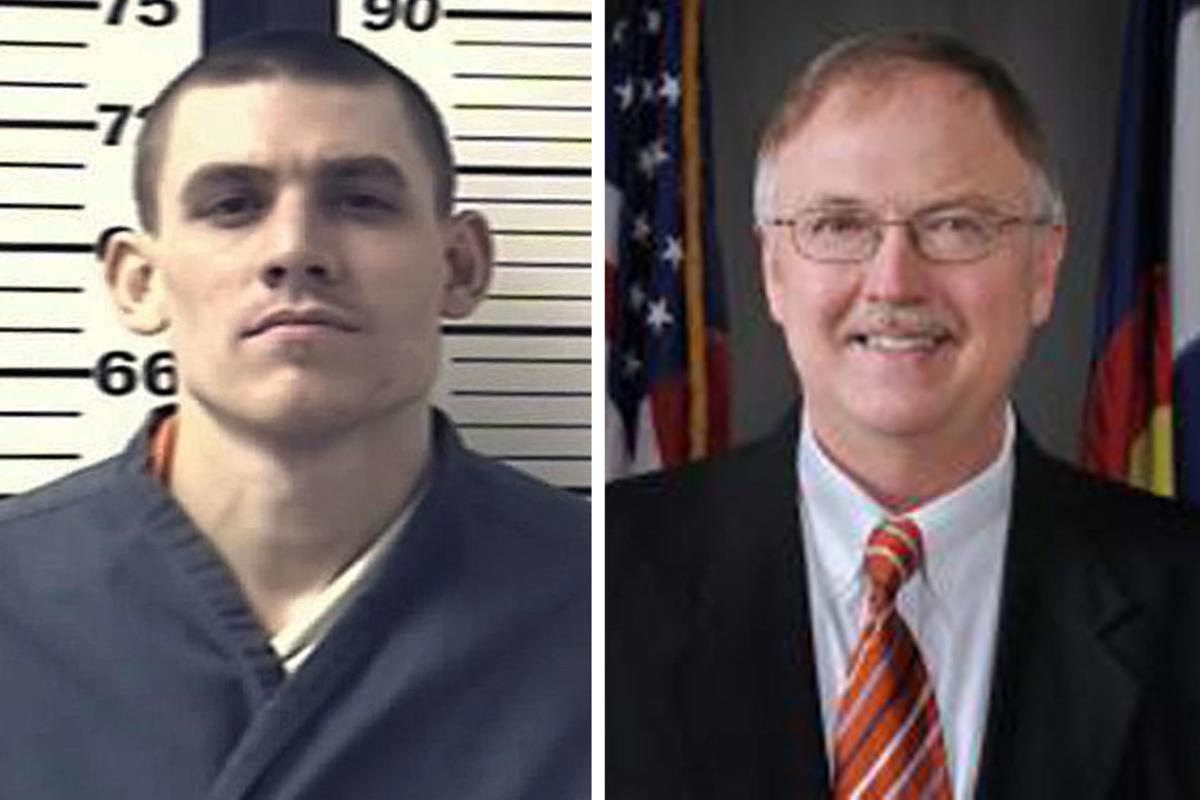 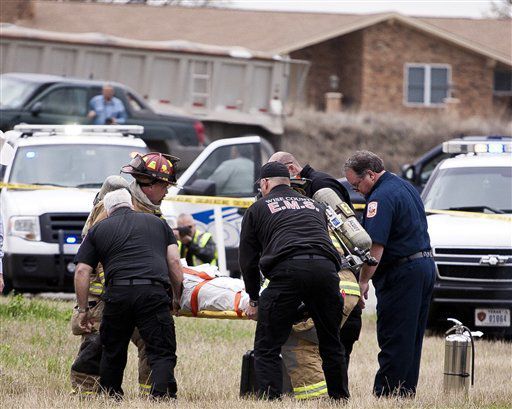 Emergency personnel carry the driver of a black Cadillac with Colorado plates who was involved in a chase and shootout with police in Decatur, Texas, in March 2013. The driver, later identified as Evan Ebel, led police on a gunfire-filled chase through rural Montague County, crashed his car into a truck in Decatur, opened fire on authorities and was shot, officials said. 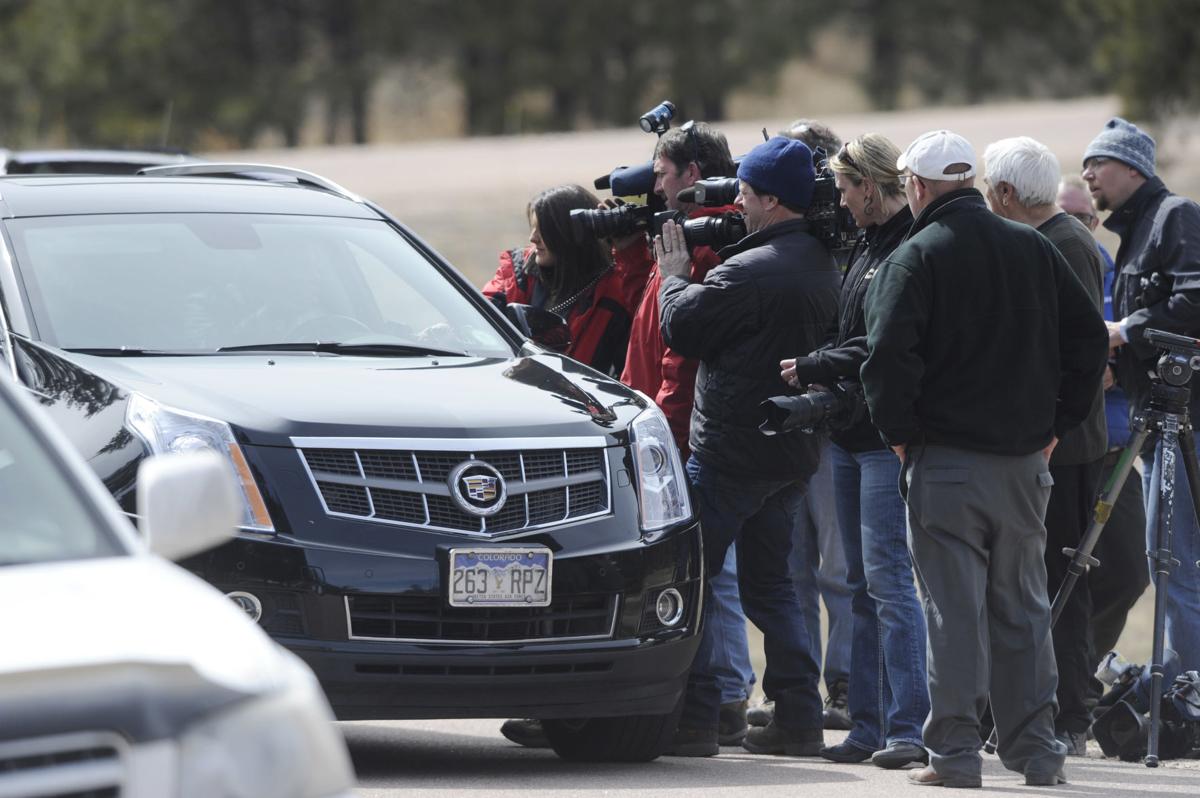 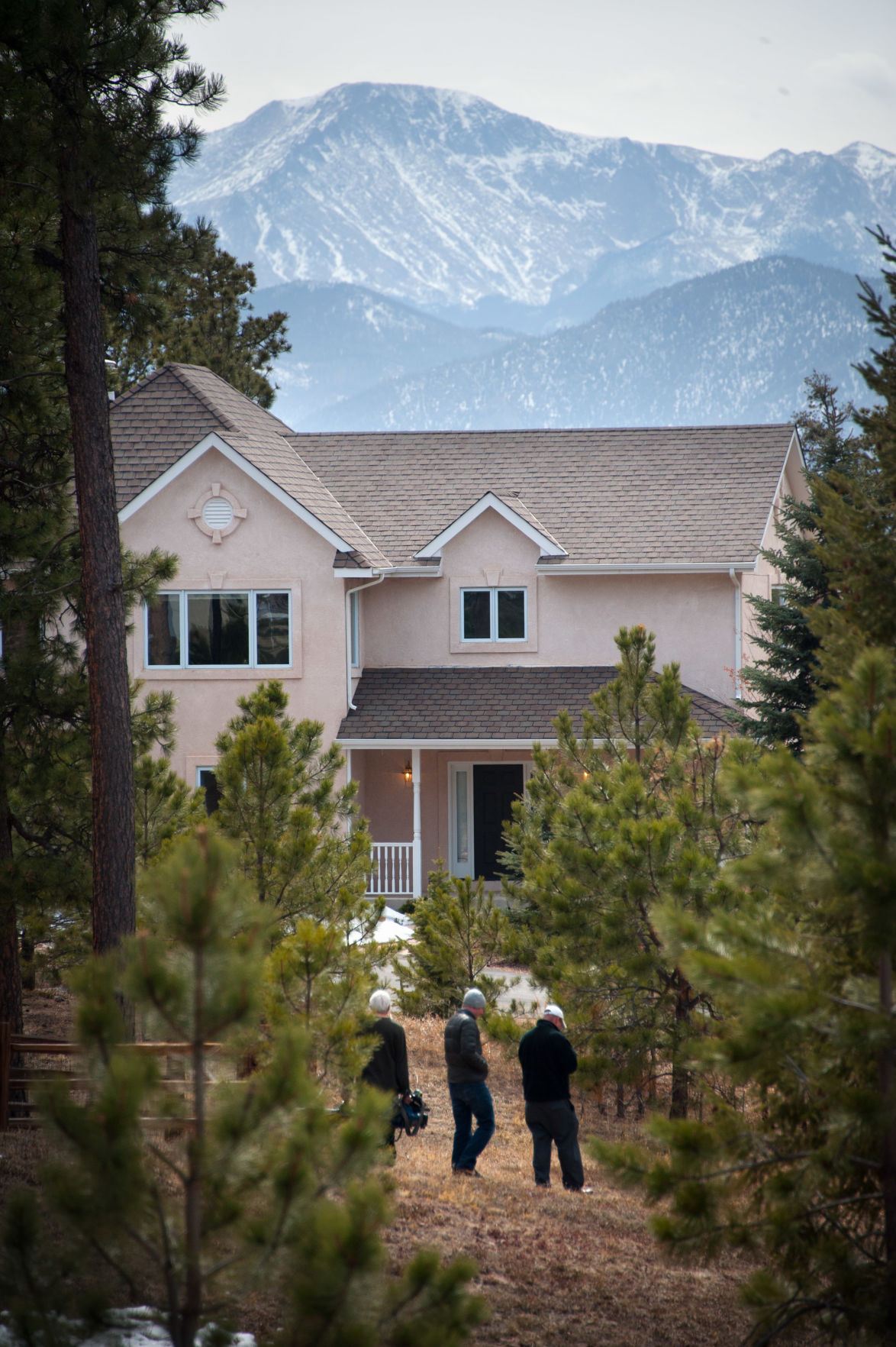 MARK REIS, THE GAZETTE THE GAZETTE file Members of the news media gather on March 20, 2013, outside the front of the Monument home of then Colorado Department of Corrections Executive Director Tom Clements.

Emergency personnel carry the driver of a black Cadillac with Colorado plates who was involved in a chase and shootout with police in Decatur, Texas, in March 2013. The driver, later identified as Evan Ebel, led police on a gunfire-filled chase through rural Montague County, crashed his car into a truck in Decatur, opened fire on authorities and was shot, officials said.

MARK REIS, THE GAZETTE THE GAZETTE file Members of the news media gather on March 20, 2013, outside the front of the Monument home of then Colorado Department of Corrections Executive Director Tom Clements.

By the time a top investigator for the Colorado Attorney General’s Office learned of the incriminating evidence, the statute of limitations had passed for the pursuit of criminal charges against the gang members, the report revealed.

State officials have withheld the findings from public review, but The Gazette obtained a draft copy of the 14-page report, prepared in the summer of 2018 for former Colorado Attorney General Cynthia Coffman by her top investigator, Larry Adkisson. Adkisson, who has since retired, and Coffman declined comment. The report is being made available to the public by The Gazette for the first time.

Adkisson’s review found glaring errors were committed by the command staff and investigators at the El Paso County Sheriff’s Office, as well as by investigators for the Office of Inspector General at the Colorado Department of Corrections.

Authorities lost key evidence or failed to review it while neglecting to document their actions; law enforcement agencies became polarized and stopped communicating; investigators failed to follow up on key leads; and investigators with the DOC continued to rely on an informant with credibility problems amid concerns the state needed to overhaul policies guiding such informant use, according to the report.

“There is no guarantee that if all of these suggestions had been implemented during the initial investigation, the results would have been different,” states Adkisson’s “best practices recommendations” report.

But, Adkisson stressed in the report that the law enforcement problems he uncovered were so severe that prosecutors would have faced significant challenges even if solid evidence had been presented that established the 211 Crew hierarchy directed Evan Ebel’s 2013 slayings of Clements and Nathan Leon, an IBM employee and father of three who had taken a part-time job as a pizza delivery man to make ends meet.

“The more disconcerting point is that if this case had resulted in establishing probable cause that someone had committed a crime, other than Ebel’s killing of Mr. Leon and Mr. Clements, there is a distinct possibility that a prosecutor would have encountered significant issues during any motions hearing or trial,” Adkisson wrote.

He concluded: “It would be devastating to establish a suspect on conspiracy and not be able to pursue the case because the case was mishandled.”

Officials with the office of Colorado Attorney General Phil Weiser, the Colorado Department of Corrections and the office of Gov. Jared Polis have refused to acknowledge the existence of Adkisson’s review of the investigations of the killings of Clements and Leon. A draft copy of the report was provided to The Gazette by a person familiar with it who asked for anonymity due to the sensitivity of the issues involved.

Adkisson’s report coincided with an additional review of the case conducted last year by a retired FBI agent, Kevin Knierim, which was delivered to former Colorado Corrections Chief Rick Raemisch in 2018. Lawyers for Polis and the corrections department also have refused to release a copy of Knierim’s report, which cost the state nearly $40,000. Concerns expressed by Adkisson triggered the state’s hiring of Knierim, now dead, to conduct his additional top-level review of the case.

Officials with the Corrections Department, El Paso County Sheriff Bill Elder’s office and El Paso County District Attorney Dan May’s office repeatedly have declined to discuss aspects of the case other than to maintain it remains open and the investigation is ongoing. Elder declined an interview request on Thursday. Annie Skinner, a Corrections Department spokeswoman, stressed that the department is under new leadership, with a new executive director and a new inspector general who oversees investigations in the prison system.

Adkisson’s report states that while it is widely accepted among law enforcement officials that Ebel killed Leon and then disguised himself in Leon’s pizza delivery uniform to fatally ambush Clements on the doorstep of his Monument home, sharp disagreements continue over whether Ebel’s actions were coordinated and directed as a hit ordered by the prison gang 211 Crew hierarchy.

El Paso County sheriff’s Cmdr. Juan “John” San Agustin concluded that Ebel’s killings were directed by other leaders in the 211 Crew. Joining Agustin in that theory were investigators with the Office of Inspector General at the Colorado Department of Corrections, Adkisson’s report revealed.

The Texas Rangers, pulled into the investigation after Ebel died in a shootout with Texas lawmen after crashing his getaway car there and shooting a sheriff’s deputy in the forehead, chest and shoulder, also concluded a wider conspiracy was behind Clements’ killing.

Bolstering that theory was a statement from a confidential informant in Texas. The informant was granted immunity from prosecution in exchange for agreeing to testify about conversations he said he had with a general in the 211 Crew, James Lohr, and a soldier in the gang, Chris Middleton. Lohr and Middleton have denied in other press reports any involvement in the killings.

The informant agreed that he would testify that Lohr confessed to him in a telephone conversation that he had ordered the killing of Clements, Adkisson states in the report.

“It appears that some investigators took this information as fact and didn’t follow up with Lohr or Middleton to corroborate (the confidential informant’s) information,” Adkisson’s report states. “It also appeared that the investigators who conducted an interview with Middleton were unaware of what (the informant) had said about the telephone conversation.”

The lead investigator at the El Paso County Sheriff’s Office disagreed with the theory from San Agustin that Clements’ killing was part of a wider conspiracy, Adkisson’s report reveals. San Agustin would go on to file a $10 million federal lawsuit asserting he was subjected to a retaliatory prosecution and arrest on public corruption charges, later dismissed, for speaking out against a lack of indictments by the prosecutor, May, against other 211 Crew members.

Eventually, a breakdown in communication developed between the El Paso County Sheriff’s Office and investigators in the Office of Inspector General Office at the Colorado Department of Corrections, Adkisson found.

The corrections investigators continued to believe a wider conspiracy was behind the slaying of Clements while the lead El Paso County sheriff’s investigator disputed that contention, Adkisson’s report revealed. Tensions escalated so much that communications between those two agencies became “strained and eventually nonexistent,” he wrote. The corrections investigators sought the help of the Colorado Attorney General’s Office in pursuing the wider conspiracy theory, Adkisson added. He further stressed that investigators and supervisors at times seemed wedded to the conspiracy theory when there was not sufficient evidence to support the theory.

“If a situation arises where there is a disagreement about the viability of theory, the investigators should discuss why the theory is or is not viable and resolve the issue,” Adkisson wrote.

The El Paso County Sheriff’s Office, the lead agency, did not compile investigative documents from other agencies, such as the Denver Police Department, Adkisson’s review further found. A Denver detective investigating the slaying of Leon, who was killed in Denver, interviewed Jack Ebel, the father of Evan Ebel. El Paso investigators did not sit in on the interview, and when they tried to interview Jack Ebel later he refused to talk to them.

The FBI pursued the theory that Homaidan al-Turki, an imprisoned Saudi Arabian serving a sentence for sexually abusing his housekeeper, had conspired with 211 Crew members to kill Clements, but the El Paso County Sheriff’s Office did not have access to the FBI’s findings. When the FBI interviewed al-Turki, El Paso County sheriff’s investigators did not get to sit in on the interview, according to the Adkisson report. Similarly, El Paso County authorities did not sit in on interviews of Jackie Vigil, the woman who pleaded guilty to buying the handgun Ebel used in the murders.

“Had someone from the El Paso County Sheriff’s Office been present during the aforementioned interviews/investigations, the lead investigative agency would have been able to ask questions and conduct follow-up on aspects of the case of which the other agencies were unaware,” according to the report prepared by Adkisson.

The El Paso County Sheriff’s Office often relied on “verbal summaries” from other agencies involved in the investigation, he further found, and the lack of documentation became troublesome. Evidence was logged in at the Sheriff’s Office but never reviewed, he also found.

“We found discs that had not been reviewed prior to or subsequent to being entered into evidence,” the report further states. “The first time some of this material was examined was during the course of this follow-up investigation, which occurred three or four years after the initial investigation.”

In at least one instance, a crucial piece of evidence involving recordings obtained through an undercover investigation went by the wayside, Adkisson found. A confidential prison informant, under the supervision of the corrections investigators, used a recording device to capture conversations with other 211 Crew members.

Those recordings, which began in 2014, “were not reviewed in their entirety” until the Colorado Attorney General’s Office did so in 2017, the report detailed. The recordings contained information that the 211 Crew general, Lohr, and 211 Crew soldier, Middleton, were worried there was evidence that would allow them to be charged with accessory to murder after the fact .

Accessory to murder after the fact carries a three-year prison sentence. Murder charges, which carry a potential lifetime prison sentence, have no statute of limitations.

The corrections investigator maintained that he told El Paso County sheriff’s officials about the informant recordings, but he could not recall specifically the person with whom he discussed the matter, the report states. The corrections investigator did not document the discussion, Adkisson found, and El Paso County sheriff’s officials said they knew nothing about the confidential informant recording.

That informant also met with investigators in the El Paso County Sheriff’s Office, 4th Judicial District Attorney Dan May and investigators with the Corrections Department, Adkisson states. All participants said that meeting was recorded, but nobody could produce a copy of the audio/video recording when the Colorado Attorney General’s Office requested it, Adkisson further found. Nobody drafted a report pertaining to that meeting, he added.

Still another confidential informant surfaced after the chief at the Englewood Police Department learned that the 211 Crew purportedly had put out an assassination order against Englewood police, the report stated. The chief believed the gang had ordered the hit as retaliation for an officer with his department fatally shooting a 211 Crew member in 2012.

“The current and former Colorado (attorneys general) said they did not know anything about the polygraph or the results,” according to his report. “The current attorney general (Coffman, at the time) said she would not have authorized the use of the confidential informant if she had known the results of the FBI polygraph.”