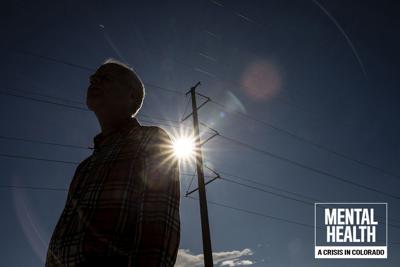 LARIMER COUNTY • Standing in tall grass off a country road, Commissioner Steve Johnson shows where voters have cleared the way for a $25 million mental health center, billed by its supporters as a regional leap in the statewide battle for improved care.

Three years ago, the reforms nearly died in a vacant lot, cut down at the polls in this northern Colorado county of 350,000 residents.

Johnson, a Republican, was among the supporters who rallied to revive the plan. With help from strange bedfellows — and scores of presentations and public meetings — they marshaled a revised initiative onto ballots last November, turning heads across Colorado in the process.

This time, it passed with 61% of the vote, affirming the power of relentless voter outreach backed by strong bipartisan support, Johnson said.

“Mental illness is not a partisan issue,” he said. “You have to have a good solution and you have to have good public awareness campaign. If you have those two things, there’s a good chance you’ll be successful.”

The turnaround — which has some in Larimer County promising a new benchmark for care — comes as communities across the state are grappling with how to pay for costly mental health care upgrades, and increasingly finding luck at the polls. In the 11 jurisdictions that put mental health initiatives on ballots last year, all but one passed, illuminating a potential path in reversing Colorado’s dismal record on mental health.

“We are wasting lives and money doing things the way we are currently doing them,” said Vincent Atchity, president and CEO of Mental Health Colorado, who cheered the initiatives’ passage.

Whether El Paso County could pull off a similar victory is a matter of “speculation,” Atchity said. But in the absence of federal funding, and with rising demand for services, he argued that local action might be the only way to produce a “seismic shift” necessary to fix systemic failures.

Atchity believes spending initiatives are well-positioned for success, thanks to an appetite for change stoked by a generation of mental health advocacy.

Larimer County and Denver emerged as the biggest victors last November, each winning a stable, long-term funding source for efforts meant to keep the mentally ill out of jails and emergency rooms for a lack of alternatives. Both passed .25% sale tax hikes, raising an estimated $14 million per year in Larimer County, and $45 million per year in Denver.

The reforms are meant to interrupt a cycle across the state, including the Pikes Peak region, harming vulnerable people and exposing public agencies to civil liability over injuries and deaths that result. Funding has always been the most stubborn hurdle.

Colorado ranks among the worst states when it comes to the prevalence of mental illness and substance abuse, fueling a growing crisis in suicides and straining public agencies that are forced to shoulder the burden, The Gazette has reported in a continuing series on shortfalls in the mental health system.

Mental Health: A Crisis in Colorado | A yearlong series

For Larimer County, change will come in the form of a 64-bed crisis stabilization and drug and alcohol detoxification center, set to open in 2021. It combines formerly separate missions under one roof, an approach that’s seen promising results in Tucson, Ariz., Houston and elsewhere.

Without such a facility, people who appear intoxicated are taken to ERs to sober up, then released without treatment of their underlying mental condition, generating repeat visits and racking up huge bills. Or, they are transported by police to jails, where they face poor care and snags with medication and may struggle to follow rules, enmeshing them further in the criminal justice system.

The dynamic recurs across the state, fueled by a systemwide inability to provide simultaneous treatment for substance use and mental illness.

Larimer County’s facility will be equipped for both, facilitating continuing therapy while providing help finding employment, housing and other basic needs — footholds on a fresh start.

Ending the cycle of poor care is a goal across Colorado, but efforts to drum up new funding have failed time after time, including in Colorado Springs.

The group tallied the massive costs of relying on the 911 system to defuse mental health crises, and suggested alternatives to ease the burden on public agencies while improving outcomes for patients, who struggle to find resources for long-term care.

No permanent funding fix emerged, however, leaving a brutal dynamic that continues to roil. Advocates say even the most promising local programs face an uncertain future, forced to hunt for grants and other short-term fixes to keep their doors open.

Just as Larimer County’s success suggested an increased willingness for change, it also highlighted a set of strategies to nudge voters to the polls.

Advocates say the come-from-behind victory shows the public can be primed to act if it understands the problem and sees that officials are on the same page in trying to solve it.

Between Larimer County’s failed bid in 2016 and last year’s win, the plan’s proponents revised their strategy, mostly by retooling their campaign to better explain the problem and solutions they proposed.

“It was the gold standard,” said Gil Barela, a former labor leader and prominent Larimer County Democrat who was tapped by county commissioners to help marshal volunteers. “We touched everybody.”

Barela previously told the newspaper the county overhaul was poised to save lives.

Among the critical steps after the 2016 loss was the county’s decision to develop a master plan that spelled out how money would be spent and monitored.

To win over rural voters, supporters changed the location of their proposed crisis center from downtown Fort Collins to county-owned acreage near a landfill, requiring a new push to improve public transit.

They appealed to fiscal hawks by appointing a board to track spending and issue regular reports to taxpayers.

The initiative’s backers went beyond Fort Collins and Loveland in cultivating endorsements from mayors in smaller communities, too, showing broad buy-in.

Laurie Stolen — now Larimer County’s director of behavioral health services — pored through 2016 election returns to devise a winning strategy. She separated out the “hell yes” votes from “hell no” votes to find precincts where voters were divided, she said, “so we understood where we needed to spend time.”

Voters wanted assurances that the entire county would share in the benefits, and that elected leaders would be good stewards of tax revenue, she said.

“This was not just a feel-good campaign,” Stolen said. “We needed a cost analysis, an ROI (return-on-investment) and data to be able to show why taxpayers should pay for this.”

Stolen, who at the time worked in community corrections, persuaded the commission to make her a “full-time, dedicated resource” on pushing improvements, allowing time to spell out the problem for voters.

Over three years, she led thousands of presentations at retirement homes, churches and other gathering places, listening to voters and detailing communitywide impacts.

Because county employees are barred from advocating for ballot issues, volunteers led the ground game, knocking on doors and making phone calls.

Barela modeled the get-out-the-vote effort after a campaign he ran that helped fund an events center east of Loveland.

Among those featured in ads was Sarah Morales, a Larimer County woman whose family searched far and wide for help after her son began experiencing delusions and outbursts at age 16 — the result of schizoaffective disorder. She keeps a spreadsheet loaded with eight years of treatment history, a revolving door in care that kept her family zig-zagging across Colorado, interrupting attempts at normalcy.

“He’s been hospitalized so many times I’ve lost count,” Morales said. “He’s been in jail waiting to get into the hospital.”

Outside of defusing mental health emergencies, her son’s hospital stays brought few long-term benefits, and she grew accustomed to hearing dour reports from his discharge teams. In what became a refrain, they sometimes told her, “Well, he’s as stable as we can get him right now.”

Today, at 24, her son is doing well in a Loveland group home, but it took years of trying programs that yielded mixed results before he found a place there, she said.

Her family’s hunt for answers led them to drop their son’s private insurance and rely on Medicaid instead, because it provided better access to better care than programs offered through private plans.

“My experience is that there just haven’t been adequate resources,” she said. “After being involuntarily hospitalized, he’s had to be shipped around the state.”

She began seeing improvements several years ago when Larimer County introduced a co-responder unit, which pairs police with a mental health worker. The team came to know her son well enough they were better able to handle his outbursts, and they smoothed his path into beneficial programs.

Morales applauded plans to bolster the service in Larimer County, saying it could save other families grief as they learn to navigate a fractured mental health care system.

In 2018, mental health initiatives also passed in Boulder and seven other counties: Adams, Araphaoe, Douglas, Jefferson, Pitkin, San Miguel and Summit. The sole losing initiative was in Pueblo. The loss in Pueblo, with its dependable bloc of Democrats, underscored that political ideology alone doesn’t guarantee failure or passage.

Atchity, of Mental Health Colorado, acknowledged that Larimer County and Denver enjoy a big advantage that sets them apart from some communities: their healthy tax base.

Sales tax initiatives wouldn’t raise such significant sums in smaller areas, Atchity said, though he argued they also have fewer problems to solve.

In El Paso County, which has the tax base to support change, the trick would be winning over voters.

“Our jail has become nothing but a mental health hospital, and it’s because of a lack of treatment,” he said.

Elder said he doesn’t know if a spending initiative could pass, but he would “absolutely” support one if “the right people” were on board and a plan showed a deep understanding of the problem and measurable strategies to produce improvements.

“If we don’t do something, we will have to build a new jail,” Elder said. “This has the ultimate potential of saving the county millions and millions of dollars.”

Up to 60% of the jail’s inmates have a mental health diagnosis, leading to a rising tab for medical care and tragedies documented by the Gazette’s series, including a 2018 episode in which a delusional inmate contracted gangrene in jail and had to have a leg amputated, leading to lawsuits against the county.

And when inmates are released, there’s little to no safety net to keep them stable, paving the way for their eventual return to a cell, Elder said.

More in Mental Health: A Crisis in Colorado | Gazette Special Report (18 of 21)