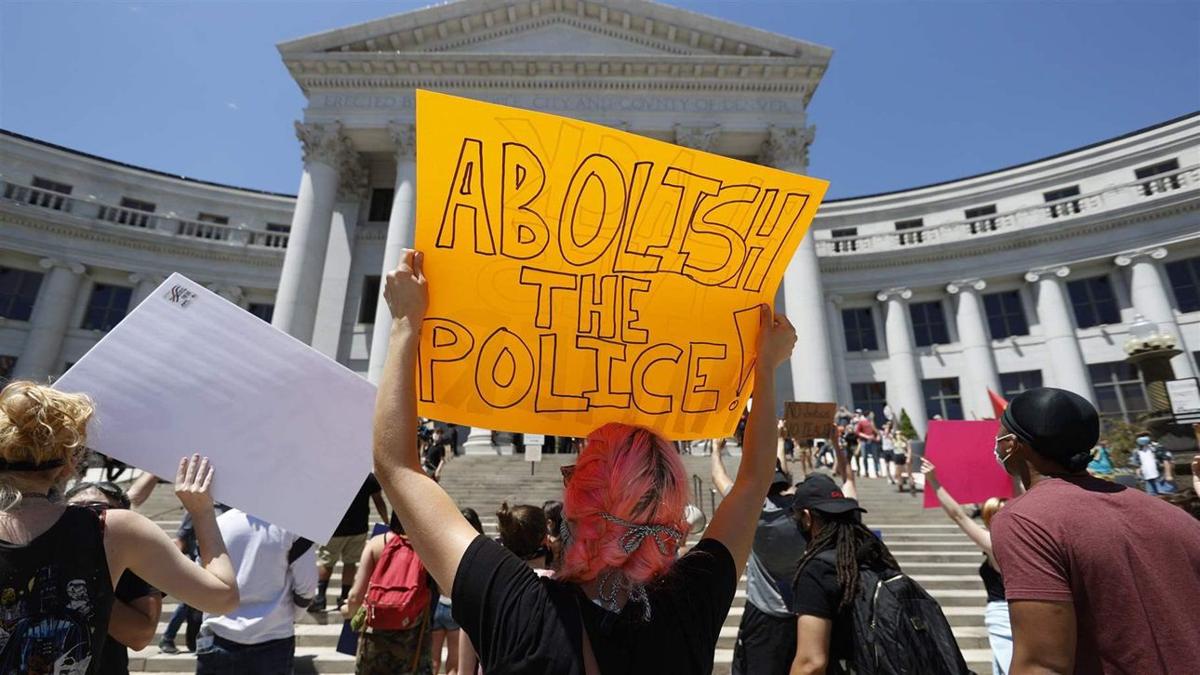 Protesters in Denver call for the defunding of police in the aftermath of the death of George Floyd. Cities across the country have begun shifting resources from police to programs that respond to 911 calls for homelessness, drug addiction and mental health crises. 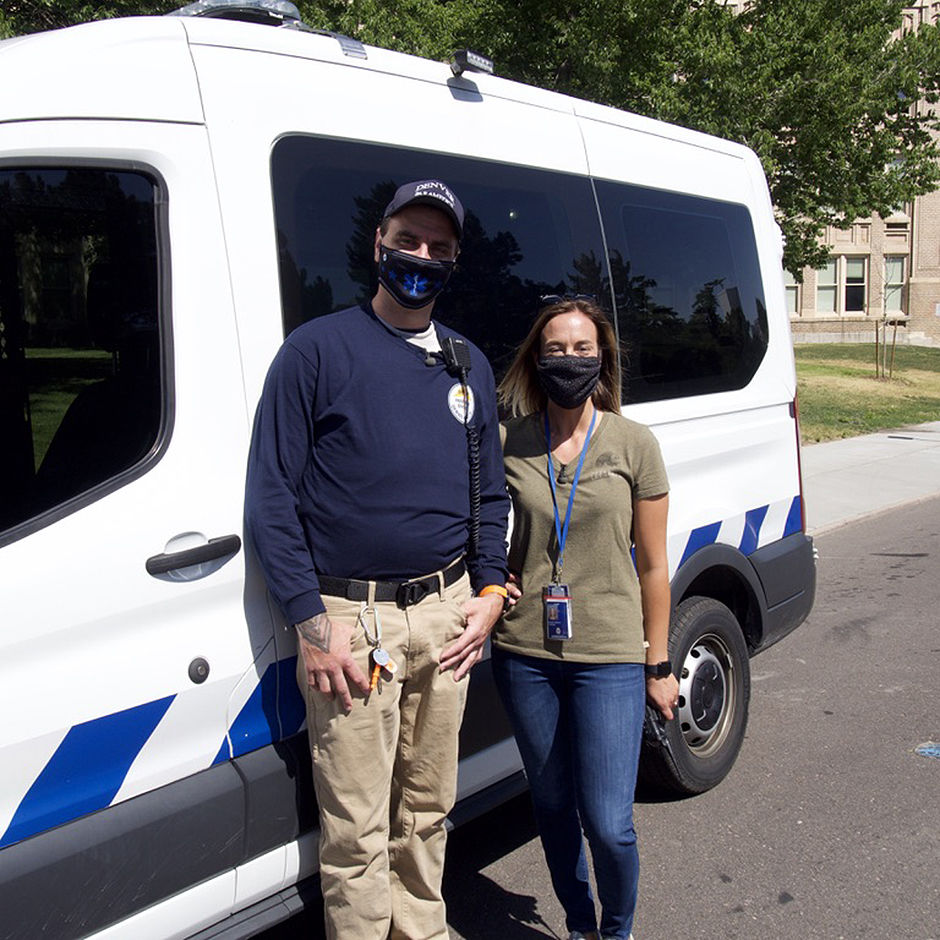 Emergency medical technician Chase Lindquist, left, and mental health clinician Carleigh Sailon respond to nonviolent 911 calls in Denver in an effort to shift first-responder duties away from police. Cities across the country are establishing similar programs.

Every weekday morning, mental health clinician Carleigh Sailon turns on her police radio in downtown Denver and finds out who she can help next. She, along with a paramedic, jump in a repurposed city van, stripped of its blue lights and official insignia, and respond to 911 calls for people experiencing mental health crises, homelessness or drug addiction.

Beginning this month, Denver’s emergency dispatch is sending social workers and health professionals, rather than police officers, to handle nonviolent situations. “If the police aren’t needed, let’s leave them out completely,” said Sailon, program manager for criminal justice services at the Mental Health Center for Denver.

Denver’s Support Team Assisted Response, known as STAR, launched at the beginning of June as a six-month pilot program, funded by a grant from the Caring for Denver Foundation. The fact that STAR began at the height of demonstrations against police brutality was coincidental, Sailon said, but fitting.

Well before protesters recently flooded the streets of America, demanding justice for the death of George Floyd and calling to defund or abolish police departments, several cities across the country had begun shifting resources and responsibilities away from law enforcement to professionals trained to handle emergency calls for nonviolent, crisis situations.

In El Paso County, there are a limited handful of teams within the Sheriff's Office and Colorado Springs Police Department that pair mental health clinicians with trained deputies and officers in responding to calls involving suspected mental health crises. The teams have been widely credited with defusing difficult situations.

In San Francisco, fewer than 5% of police calls are to respond to violent crimes, Police Commissioner John Hamasaki told Stateline in an email. San Francisco Mayor London Breed announced earlier this month that, along with other changes, the police would no longer respond to noncriminal situations, instead diverting 911 calls to agencies outside law enforcement.

For decades, cities have asked police to manage social problems such as mass homelessness, failed schools and mental illness, said Alex Vitale, a professor of sociology and coordinator of the Policing and Social Justice Project at Brooklyn College. But it has not worked. The resources that have swelled police departments across the country should be redirected to community-based programs, he said.

“People cycle through emergency rooms, jail lockups and homeless shelters,” he said, “and those problems get turned over to the police to manage.”

Mental health responses can be handled without police if funded and structured well with properly trained and adequately paid professionals, said Amy Watson, a professor at the University of Illinois at Chicago who studies the criminal justice and mental health systems.

But that can be challenging, she said. One of the biggest issues facing community mental health programs is turnover — the pay is low, and people don’t stay.

This takes an investment, she said, which is at the heart of the “defund the police” argument. “We really need to be thoughtful about how we approach this,” she said. “But if we do resource mental health services appropriately, there will be less demand on police to provide mental health crisis response.

“It will not be eliminated, but it could be significantly reduced.”

Some police advocates, such as Dennis Slocumb, international political director and vice president emeritus of the International Union of Police Associations, welcome programs that shift nonviolent crisis calls from police to social workers. But, he said, that shouldn’t come at the expense of police funding, which could reduce their equipment and training.

Police can’t do everything

Shortly after a gunman killed five Dallas police officers in July 2016, a frustrated then-Chief of Police David Brown told reporters, “We’re asking cops to do too much in this country. … Not enough mental health funding, let the cops handle it.”

In many instances, people experiencing personal crises have been killed by police responding to 911 calls from worried friends or family members. People with an untreated mental illness are 16 times more likely to be killed in a police encounter than others, according to a 2015 study by the Arlington, Virginia-based Treatment Advocacy Center.

In response, police departments across the country have adopted, among other measures, crisis intervention training, which teaches officers how to safely de-escalate a potentially dangerous situation, sometimes involving people experiencing a personal crisis. Proponents of the program say it can reduce violent interactions between police and the public.

This training, while valuable, is insufficient compared with the training mental health professionals receive, said Slocumb, of the International Union of Police Associations.

“Our training barely scratches the surface,” Slocumb said. “Every time there is something that’s causing a problem in society and people don’t know who else to call in the middle of the night, we go.

But what if society stops asking police to respond to those situations in the first place? public health advocates ask.

Police officers are not mental health experts and in complex crisis situations, a trained clinician can be invaluable, said Sailon. Recently, for example, she responded to an emergency call from an exasperated, wheelchair-bound man in downtown Denver.

The man told Sailon he needed to connect with the Department of Veterans Affairs, where she had contacts from her years in this field. “Oh my God,” her contact there said, “I’ve been looking for him for three months.” Sailon brought him to the hospital shortly after.

“If officers showed up on the scene, I don’t really know there’s a law enforcement solution for that,” Sailon said. “This is case management stuff. This is social work stuff.”

Still in its early stages, Denver’s STAR has staff to handle around 12 calls a day in the downtown area. The program hopes to expand with more funding, staff, vans and geographic reach after the pilot ends. Ideally, Sailon said, it would operate at all hours and days of the week.

Similar efforts are expanding across the country.

In Albuquerque, Democratic Mayor Tim Keller announced last week he plans to spend the next two months creating a third department of first responders, alongside the police and fire departments, in the New Mexico city to handle calls involving homelessness, addiction and mental health.

“It’s just not working,” he said in an interview. “Fundamentally, this is about looking at a third way of responding to public safety issues in a community.”

The Albuquerque Police Department has, since 2014, been under a federal consent decree for excessive force and inadequate oversight, and has been changing its policing policies to better serve the city of 560,000 residents. A federal judge would have to approve the new agency later this year.

In Austin, city officials recently added funding for mental health professionals to work at the Texas capital’s 911 call center and immediately respond to a person experiencing a crisis.

The Expanded Mobile Crisis Outreach Team, known as EMCOT, which has operated since 2013, found that instead of waiting for police to reach out to the team in behavioral health situations, it was more efficient for members to handle crisis calls directly.

“We want to ensure they have the treatment and support they need to last them through the direction of the crisis episode,” Slocum said. “It’s always our goal to strengthen community response to people experiencing mental health crises.”

Integral Care is in talks with the Austin City Council to expand the program with additional funding.

The Austin and Denver police departments did not respond to interview requests.

For the past 31 years, Eugene, Ore., has offered alternative, public health responses to emergency calls.

Run out of the nonprofit White Bird Clinic, the Crisis Assistance Helping Out on the Streets, known as CAHOOTS, team responds to 911 or non-emergency police calls that may not require law enforcement in the Eugene-Springfield area. Instead of sending police officers, dispatchers send a crisis worker and a medic.

The program is saving local hospitals $4 million every year by providing non-emergency medical care and first aid, said Tim Black, the operations coordinator at CAHOOTS. At the same time, it provides a free service to people in need who would otherwise call a costly ambulance.

Many people in crisis do not need a police officer, he said, but someone to listen or help connect them to services.

“There’s this really tremendous moment that we’re in to talk about something very different for communities’ response to people in need,” Black said. “There are so many different situations where we encounter somebody who is in a profound crisis and it’s all really about unmet needs and lack of resources.”

Black and other members of his team have spoken with people in cities such as Austin, Los Angeles and Oakland, Calif., about establishing similar programs.

The team also inspired Denver’s STAR program. In 2017, a group of local police reform activists and lawmakers traveled to Eugene to see the program in action. Roshan Bliss, co-founder of the Denver Justice Project, a group dedicated to transforming law enforcement, helped organize the trip. He hopes more cities will act.

“I’m a Black man who’s tired of seeing police hurt people in my community,” he said, “especially when police shouldn’t have been there in the first place.”

The movement to abolish or defund the police is not new. It has been a critical element of the protests that grew out of Michael Brown’s death in 2014 in Ferguson, Mo. But the death of George Floyd and the protests that followed were an inflection point in this country, making the argument to fundamentally restructure policing more politically tenable, Bliss said, building on decades of activism.

As many other civil rights activists have argued, Bliss said police agencies in this country are rooted in deep-seated racism, established early in this country’s history to track down escaped enslaved persons and bolstered over time to maintain white supremacy.

The argument is taking hold. In Minneapolis, where a police officer killed Floyd, the City Council voted earlier this month to disband the Police Department and build a new system focused on public safety. Democratic Mayor Jacob Frey opposed the move, but the Council has a veto-proof majority.

Police abolitionist organizers such as Jae Hyun Shim, a core member of MPD150, which authored a 2018 report exploring alternative public safety measures to the Minneapolis Police Department, are cautiously optimistic.

“I have a lot of confidence in everybody in our city right now that we don’t slip back in a pattern that could potentially create a situation like this again,” Shim said. “We must move away from this system that is harmful and takes actual money away from things that I think will heal us.”

Stateline is an initiative of The Pew Charitable Trusts.

In the early spring, as the coronavirus was establishing its deadly grip, but before the nation ignited in rage at the death of George Floyd a…