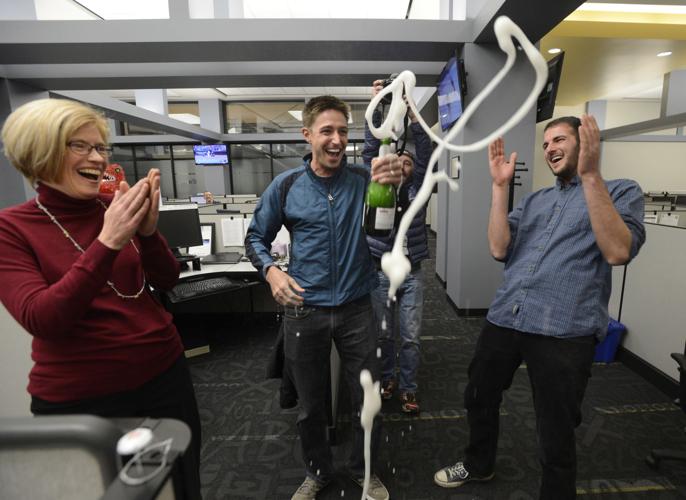 FILE PHOTO - David Philipps, center, pops the cork during a Pulitzer Prize celebration in the Gazette newsroom Monday night, April 14, 2014. The prize for National Reporting was awarded to Philipps Monday for the Gazette's "Other Than Honorable" series, expanding the examination of how wounded combat veterans are mistreated, focusing on loss of benefits for life after discharge by the Army for minor offenses. At left is Gazette managing editor Joanna Bean, who edited the project, and at right is Gazette Photographer Michael Ciaglo, whose photos appeared in the series. Photo by Mark Reis, The Gazette. 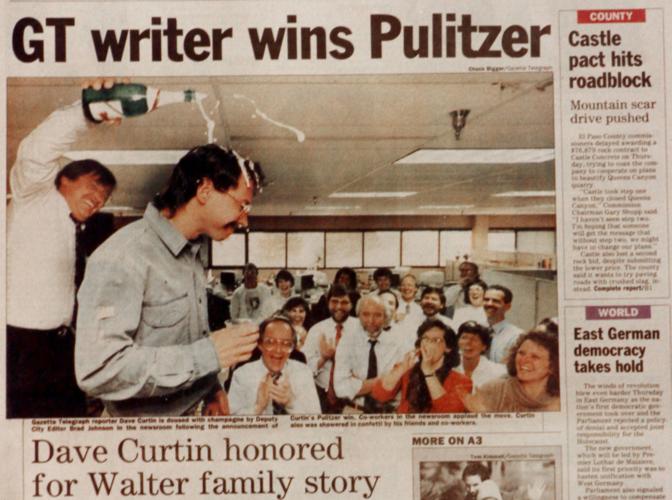 FILE PHOTO - David Philipps, center, pops the cork during a Pulitzer Prize celebration in the Gazette newsroom Monday night, April 14, 2014. The prize for National Reporting was awarded to Philipps Monday for the Gazette's "Other Than Honorable" series, expanding the examination of how wounded combat veterans are mistreated, focusing on loss of benefits for life after discharge by the Army for minor offenses. At left is Gazette managing editor Joanna Bean, who edited the project, and at right is Gazette Photographer Michael Ciaglo, whose photos appeared in the series. Photo by Mark Reis, The Gazette.

For journalists, some stories reveal themselves in an instant, others develop over time. The Gazette has had its fair share of both. But only two staffers have won Pulitzer Prizes.

The Gazette's front-page tagline "Pulitzer Prize-Winning Newspaper" focuses on these prizes because they are the the pinnacle of journalistic excellence and require not only powerful storytellers but powerful stories.

Dave Curtin was awarded the Pulitzer Prize in 1990 for a special section, "Adam & Megan," published in the Sunday paper. The story follows a 6-year-old boy and his 4-year-old sister through their recovery and reintegration into the community after they were severely burned and nearly killed in an explosion at their home.

The Gazette's second Pulitzer came nearly 24 years later after Dave Philipps wrote  "Other than Honorable," a three-part series about the systematic disenfranchisement of soldiers with "invisible injuries" from military benefits because of their misconduct. The story zeroed in on the contributing factors of troop reductions, a clogged medical discharge system and a lack of understanding for soldiers' unseen wounds.

The work for the first Pulitzer began when Curtin arrived at the Penrose Hospital Burn Unit on June 21, 1988, after news about the explosion blared over the police scanner. From there, he would spend the next six months following the Walter family and their journey.

"It also would not have won without the willingness of the family to completely open their lives up to me at the worst time of their lives."

From physical therapy and meals to their first day back to school, Curtin shadowed the children's lives, keeping a journal as he observed them.

"I used that journal and turned it into the story," Curtin said. "And we made a lot of decisions along the way about how to present the story."

Part of that presentation included a depiction of the children's new day-to-day life as well as some of their difficulties and victories. Curtin felt that his story not only helped raise awareness and reintegrate the children into public life, but it gave people in the community a sense of courage and strength.

"I'd like to mention that the courage of this family and these children, who are now thriving adults, has been an inspiration to me throughout my own life." Curtin said. "When things get tough, I think of them."

After awarding Curtin the Pulitzer Prize in 1990, then Pulitzer Prize Administrator Bob Christopher noted that the story was reported and written sensitively and humanely.

"A lot of times these are written like tear-jerkers," Christopher said. "This was not overdone and that's where it got a lot of its power."

"I was just a lowly features writer who didn't have either the experience or the permission to do big investigative stories," Philipps said. "But there came a point where there was this stuff that was happening in the city, that was, I felt, too important to ignore."

Tracing the turmoil of soldiers who suffered invisible wounds during war, who were punished for misconduct, then lost their benefits, didn't only make for great journalism, but made real change.

"I'm still friends on Facebook with the two other soldiers I featured and they're doing really well," Philipps said. "I mean, especially the guy who was in solitary confinement [...] he got out, he got full medical benefits, he fixed up his marriage, and he got to raise his kids. And, none of that would have happened, he would have sat in a prison in Colorado for his whole life."

While each of the Pulitzer Prizes marked a different era of journalism at The Gazette, they were celebrated the same way — with a bottle of champagne.

At the time, Philipps and Curtin expressed disbelief with the awards but agreed that neither the stories, nor their careers, were ever about prizes.

"The whole Pulitzer experience itself really showed me what a great team it was," Curtin said, noting the collaboration at The Gazette that made the award possible, from Tom Kimmell's photography to the reporters who covered his night reporting shifts.

"Everybody put their heart and soul into it."

The Gazette celebrates its 150th anniversary | Photos and video

It took 150 years to get here, and what a ride it's been. The Gazette celebrated its 150th anniversary Thursday, May 6, 2022, with a celebration at The Broadmoor's International Center.