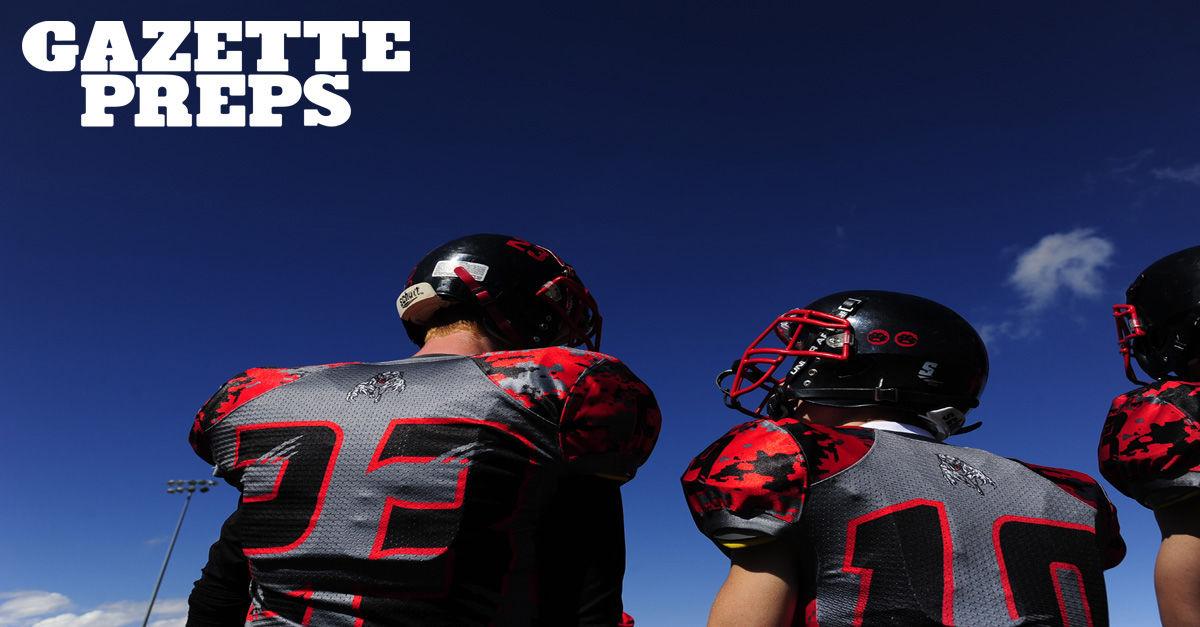 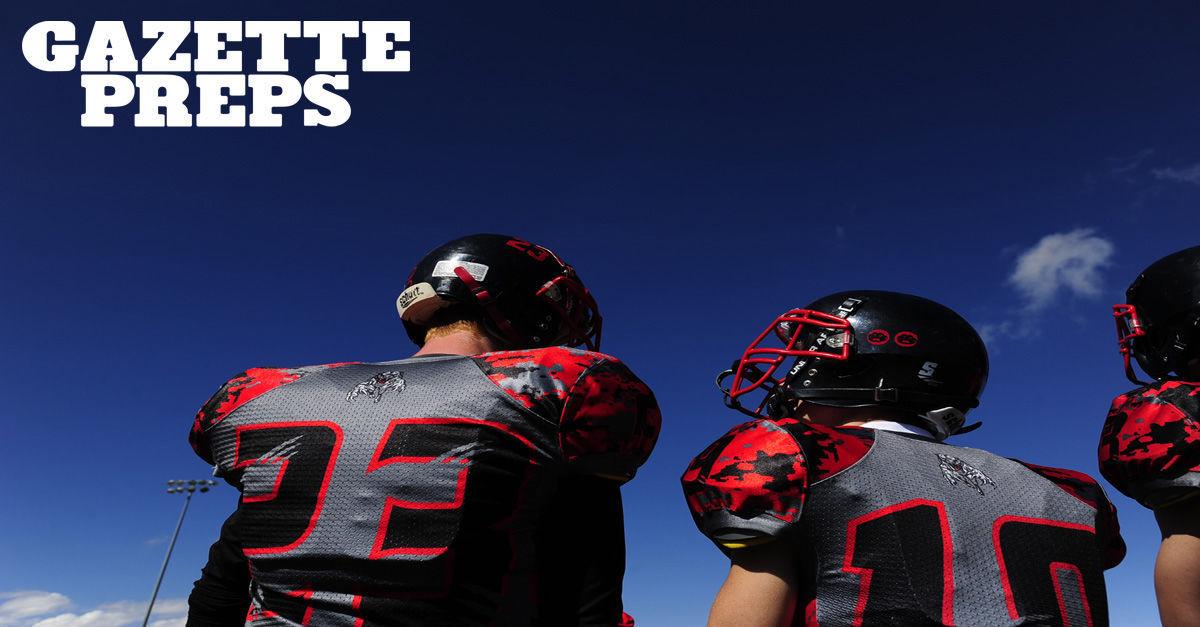 Ty Evans, sr., Palmer Ridge — Evans concluded his high school run with a second straight state title and 9,453 total passing yards, 106 touchdowns and a .601 career completion percentage. He threw for 2,666 yards, 33 touchdowns and ran for 355 yards and 11 touchdowns in his senior season as he led the Bears to another 3A title.

Seth Fuller, so., Harrison — Fuller made an immediate impact for the Panthers, finishing his first varsity season leading Class 3A sophomores in receiving yards with 928 yards and seven touchdowns. He averaged 15.7 yards per catch and had 100 or more receiving yards in two games. Fuller had 49 tackles, 32 of them solo, five for a loss and two sacks.

Peyton Brones, jr., Colorado Springs Christian — Brones finished his junior season ranked in the top 10 in the state in rushing yards with a staggering 1,724 yards through 11 games. He averaged 156.7 yards per game and rushed for 24 touchdowns as CSCS completed one of its most successful seasons ever.

Aumiere Shedrick, sr., Harrison — With 1,558 rushing yards Shedrick completed his senior year ranked as a top-15 Colorado running back. He averaged 129.8 rushing yards per game and had 431 receiving yards. He had six multi-touchdown games and ran for 100 or more yards eight times, including two 200-plus yard games.

Joel Scott, sr., Lewis-Palmer — Scott used his 6-foot-7, 205-pound frame to beat defenders and pull down 41 catches for 666 yards. Scott caught four touchdown passes and on the defensive side, recovered two fumbles and blocked three field goals. He was also the team's punter, averaging 35.1 yards per punt and pinned five inside the 20.

Nate Mesa, sr., Harrison — Mesa helped anchor an offensive line that allowed the Harrison offense put up 5,078 yards, ranked eighth in the state. The 6-4, 295-pound senior was a two-way lineman, racking up 69 total tackles on defense, including 36 solo, seven for a loss and five sacks.

Gage Clawson, jr., Discovery Canyon — In his first varsity season, Clawson helped Discovery Canyon to a 7-0 start and aided the Thunder’s efforts to become the No. 3 3A rush offense in the state with 3,511 rushing yards and 49 rushing touchdowns. The two-way starter also had 21 tackles and returned a fumble for a touchdown.

Cody Bruce, jr., Palmer Ridge — The No. 5 offense in the state wouldn’t have been able to put up 5,198 yards without the efforts of the offensive line, aided by Bruce. Bruce is a 6-3, 260-pound junior. He helped opened holes for the Bears’ run game, which ran for 340 more yards than a year ago.

Mitchell Jefferies, sr., Palmer Ridge — Jefferies, a 5-11, 215-pound center, anchored the offensive line that allowed the offense to put up more than 370 yards per game. He protected quarterbacks, who threw for 2,713 yards, and allowed his rushers to run for more than 2,475 yards on the way to a second straight state title.

Isaiah Padilla, sr., Lewis-Palmer — Padilla allowed for a breakout year for Lewis-Palmer’s top rusher Evan Walsh, all the while helping the Rangers rack up 3,451 yards of offense. Padilla, who stands at 6-2, 235, blocked at 84 percent for the season, according to coach Dustin Tupper.

Orlando Westbrook-Sanchez, sr., Harrison — Westbrook-Sanchez is arguably the most dynamic quarterback in the Pikes Peak region. He finished the year ranked 10th in the state with 2,336 passing yards, 18 touchdowns and just one interception. As a true dual threat he also racked up 817 rushing yards. He finished his senior season with 3,153 total yards and 37 touchdowns.

Sergio Alvarado, sr., Harrison — Alvarado racked up 97 total tackles, including 54 solo to help the Panthers to a historic year. Six of those tackles were for a loss and he also caused one fumble. The 5-10 defensive back pulled down six interceptions, ranked sixth in Class 3A. On special teams Alvarado had 82 kick return yards.

Ryan Monteleone, sr., Discovery Canyon — Monteleone’s talents at corner that had area coaches raving. DCC coach Shawn Mitchell said just five passes were completed against Monteleone in league play, and he had 15 passes defended as a "lock-down" cornerback. He had 45 total tackles, including 25 solo.

Kaden Dudley, so., Palmer Ridge — Dudley quickly established himself as a major threat in the secondary, finishing his first varsity season ranked third in the state and atop Class 3A with nine interceptions. The sophomore had a pick six and a kickoff return for a touchdown in addition to 342 receiving yards and six touchdown catches.

Dylan Matesi, sr., Palmer Ridge — With 61 tackles and four interceptions, including a pair of pick-sixes, Matesi was an all-around threat for the Palmer Ridge defense. He had two interceptions against Canon City and Littleton, returning one each to the end zone. He also had a 40-yard touchdown reception and a 19-yard catch in the state title game.

Nate McLarty, sr., Peyton — McLarty led Class 1A in total tackles, and ranks No. 4 from classes 3A-1A with 132 tackles. He averaged 12 tackles per game and pulled down 25 for a loss. The 6-2, 210-pound linebacker opened the season with an 18-tackle performance, and had seven for a loss against Ellicott.

JC Sparks, sr., Palmer Ridge — Sparks finished his career ranked fifth in Class 5A with 125 tackles, averaging 9.6 per game, and led the classification with a staggering 28 tackles for a loss. He came in third in 3A with 13 sacks. Sparks also blocked a punt, forced two fumbles, and caught two touchdown passes in his senior season.

Caleb Sherrill, sr., Falcon — Sherrill more than doubled his total tackles from a year ago, pulling down 110, including 82 solo and 16 for a loss. Sherrill had 2.5 times more total tackles than the next-ranked Falcon defender. He averaged 11 tackles per game, had two sacks and six QB hurries.

Colton Dill, sr., Palmer Ridge — Dill had 102 total tackles helping the Palmer Ridge defense hold opponents to just 13.6 points per game on average. Of his 102 tackles, 53 were solo. Dill had 18 tackles for a loss as a senior and nine sacks. The 6-1, 205-pound linebacker had 17 total tackles against Palisade two years in a row.

Aidan Cullen, sr., Palmer Ridge — Cullen was the anchor of a powerful Palmer Ridge defensive line that helped post three shutouts this season. Cullen had 88 total tackles, including 13 for a loss and 6.5 sacks. Through four varsity seasons, Cullen pulled down his first-career pick-six in the state title game against Pueblo East.

Jacob Dillon, sr., Palmer Ridge — With 16.5 sacks, Dillon led Class 3A averaging 1.3 sacks per game. He finished the year with 70 total tackles, split evenly between solo and assists, and had 13.5 tackles for a loss. Dillon, a 6-1, 245-pound tackle had two or more sacks in four games.

Greg Olsen, sr., Colorado Springs Christian — Olsen was a key component on a defensive line that helped post six shutouts and held opponents to just 10.4 points per game on average. He had 56 total tackles, including 39 solo, to average 5.1 tackles per game. He also had 14 tackles for a loss, three sacks, and was the team’s kicker.

Makeah Scippio, jr., Harrison — Scippio helped keep the Panthers’ historic season alive as he aided the defensive line to allow no more than three touchdowns in a regular-season clash. He had 41 tackles and 12 for a loss, seven sacks and had a safety. He also had 266 receiving yards and caught a touchdown pass.

Griffin Anderson, sr., Discovery Canyon — Anderson averaged 36.2 yards per punt in his senior season, pinning seven punts inside the 20. His season long was 53 yards, and had 651 punt yards on 18 attempts. He also averaged 56.6 yards per kickoff and hit 30 of 33 point-after attempts for the Thunder.

Zach Pribyl, jr., Palmer Ridge — Pribyl completed an extremely consistent first varsity season, making all 70 point-after attempts for the Bears. Through 12 games he averaged more than five extra points per game. The junior finished third on the team in points with 73. He was 1 for 3 on field goal attempts, his longest was 27 yards.

Drake Antoon, sr., Falcon — With 441 return yards Antoon more than doubled his production from a year ago. He averaged 27.6 yards per kickoff return through 14 returns, and averaged 9 yards per punt return. Antoon also had 1,055 yards and eight rushing touchdowns, more than doubling his yardage from last year.