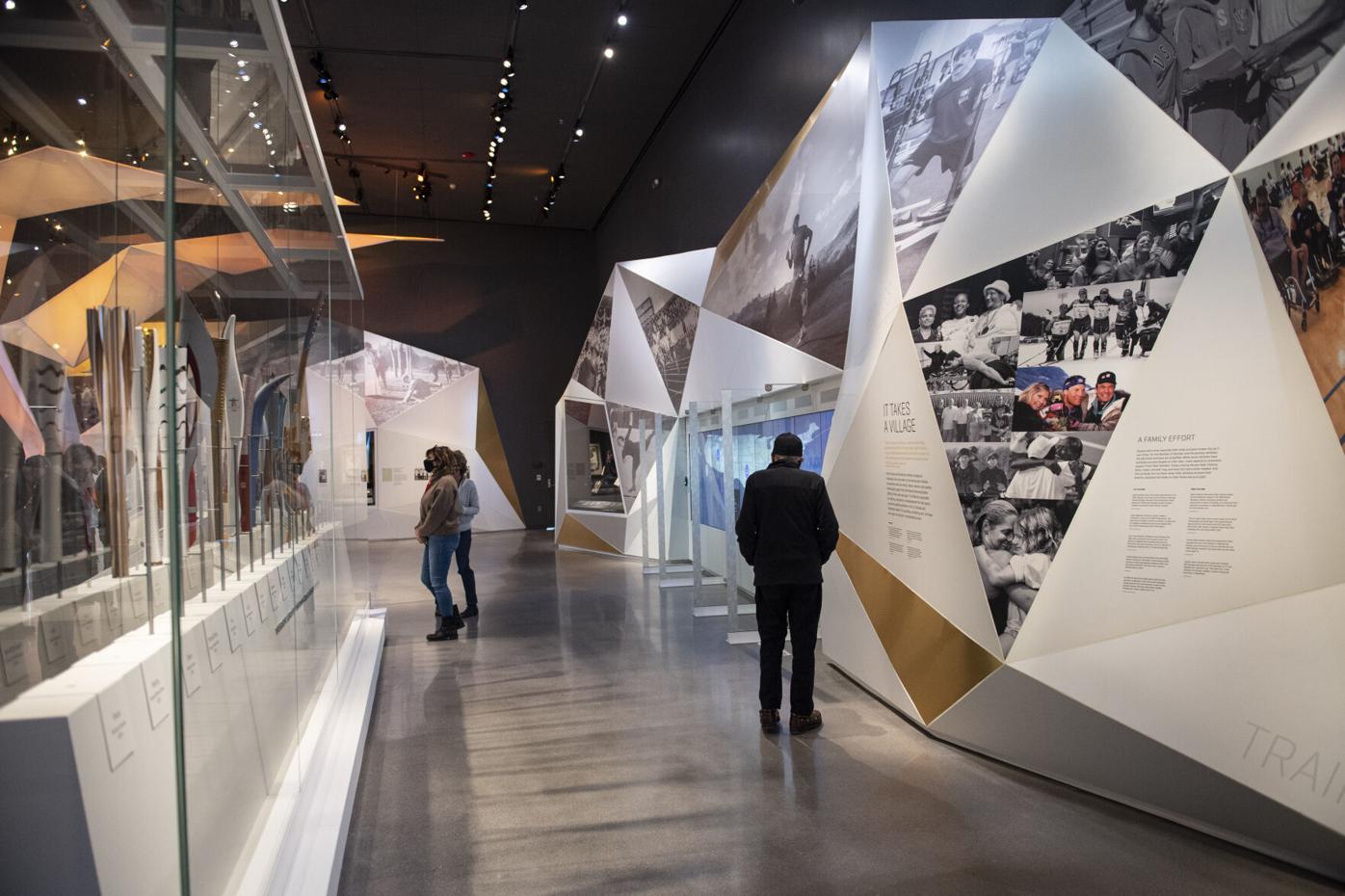 Visitors explore the collection of Olympic torches from the Crawford Family U.S. Olympic & Paralympic Archives, a full set dating to 1936 when the first Olympic torch relay was held,

at the U.S. Olympic & Paralympic Museum in Colorado Springs. 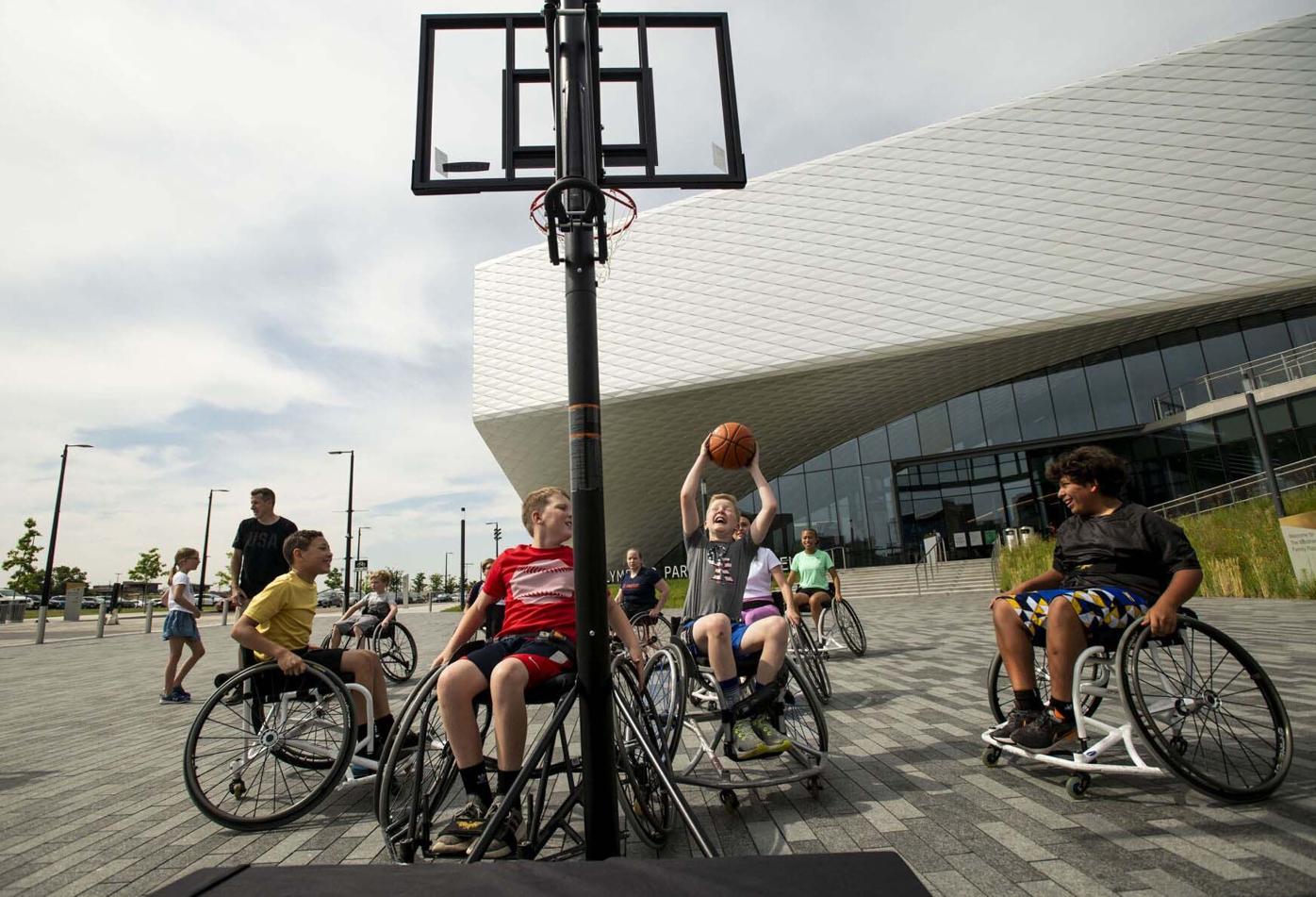 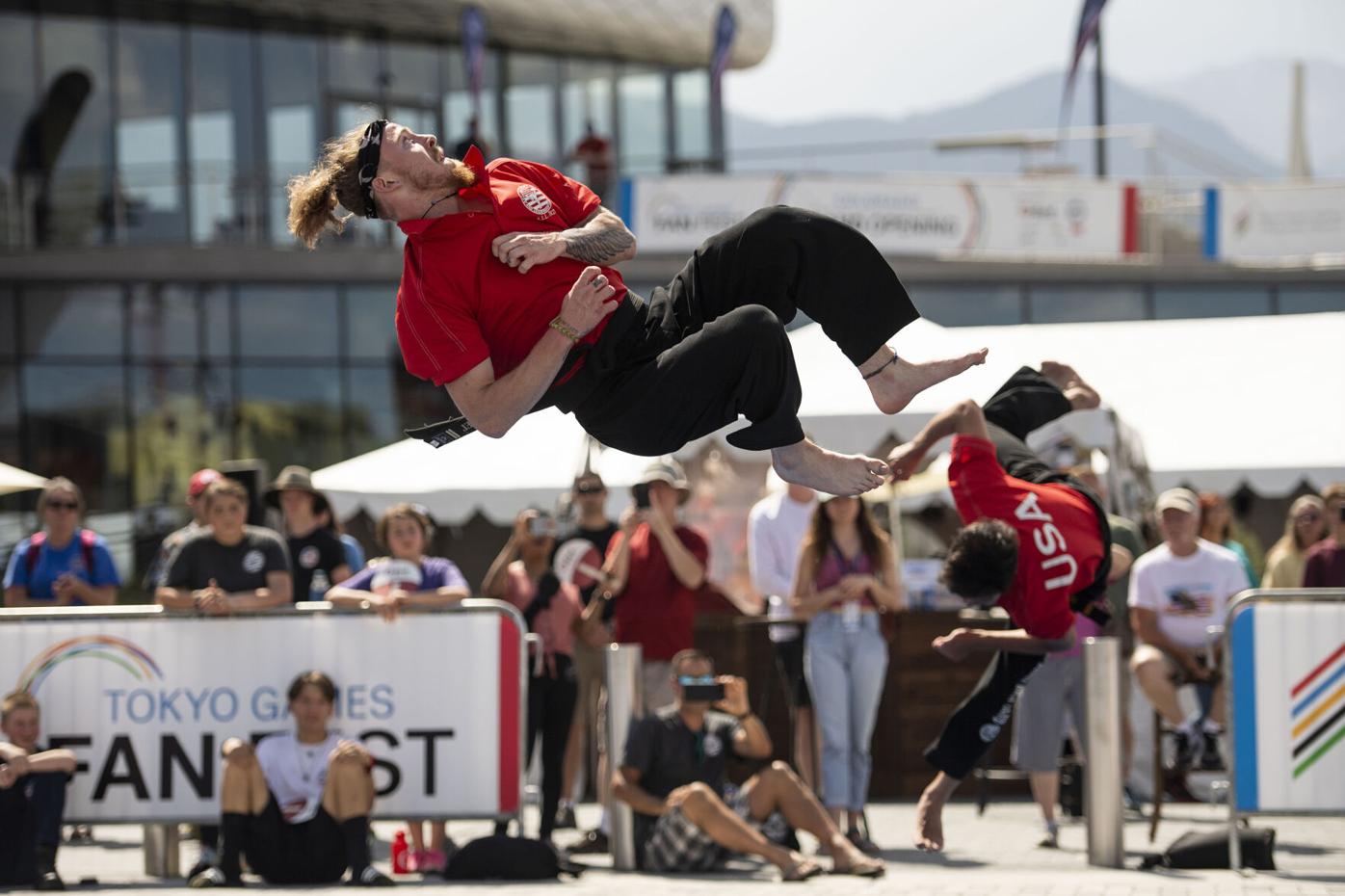 Nicholas Kunkel leaps into the air during a demonstration in July by USA Taekwondo on Day 2 of the Fan Fest, in celebration of the Tokyo Olympic Games, at the U.S. Olympic & Paralympic Museum in Colorado Springs. 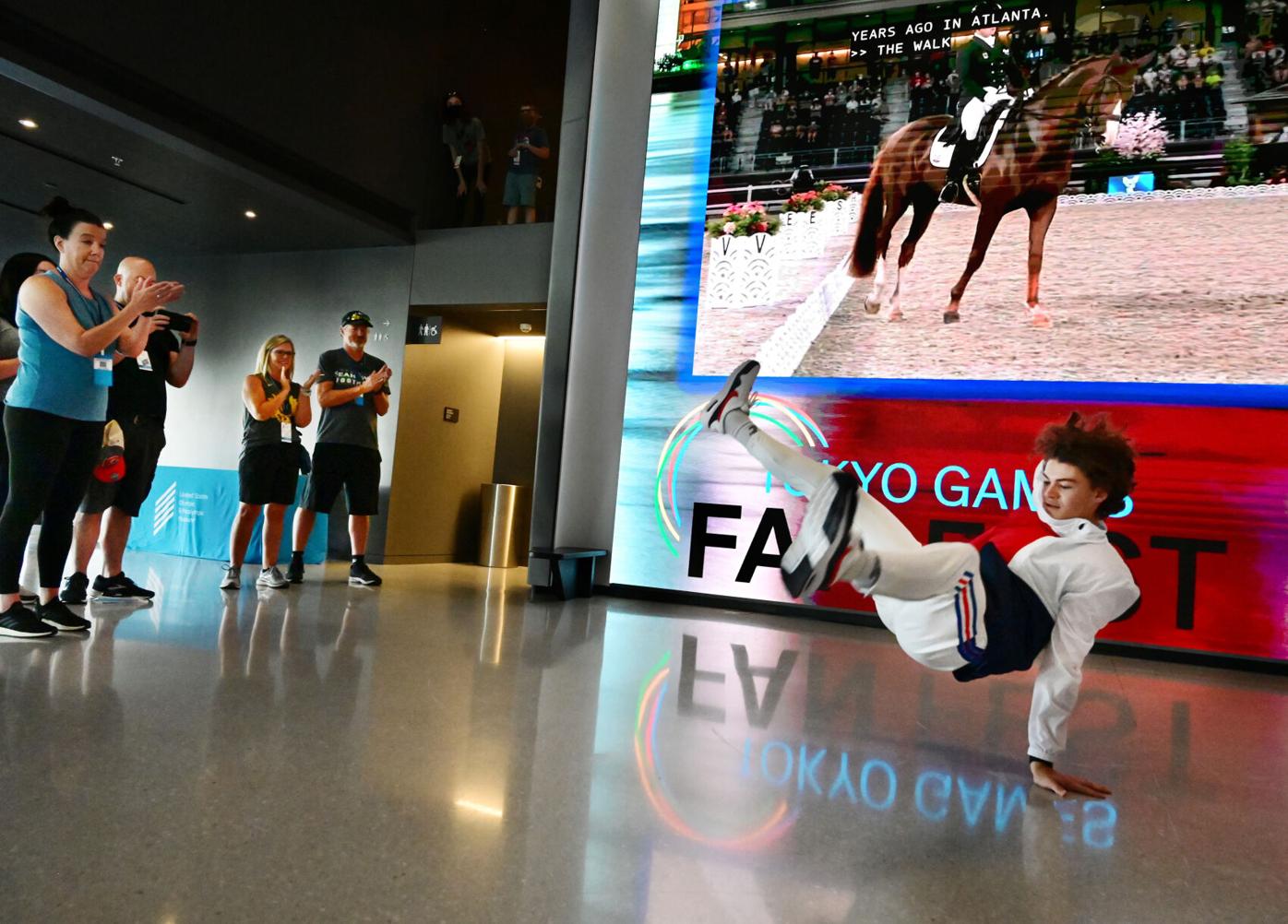 Kobe Olson performs with the On The Break Dance Academy to promote one of the newest sports to the Olympics, break dancing, recently at the U.S. Olympic & Paralympic Museum in southwest downtown Colorado Springs.

Visitors explore the collection of Olympic torches from the Crawford Family U.S. Olympic & Paralympic Archives, a full set dating to 1936 when the first Olympic torch relay was held,

at the U.S. Olympic & Paralympic Museum in Colorado Springs.

Nicholas Kunkel leaps into the air during a demonstration in July by USA Taekwondo on Day 2 of the Fan Fest, in celebration of the Tokyo Olympic Games, at the U.S. Olympic & Paralympic Museum in Colorado Springs.

Kobe Olson performs with the On The Break Dance Academy to promote one of the newest sports to the Olympics, break dancing, recently at the U.S. Olympic & Paralympic Museum in southwest downtown Colorado Springs.

The U.S. Olympic and Paralympic Museum did not get the soaring grand opening officials had hoped for.

As it did with many things, the COVID-19 pandemic interfered with the opening of the highly anticipated venue on the southwest side of downtown Colorado Springs, keeping guests away and cutting into revenue.

But more than a year after it opened, there’s new hope for the future of the museum. The Olympics spurred fans to visit the museum and the organization hosted its Colorado Grand Opening, at which it hosted weekly events from July through Labor Day.

The opening of the museum — named in January as one of 2020’s most anticipated buildings worldwide by Architectural Digest and by USA Today as the nation’s best new attraction — culminated an eight-year effort by a nonprofit group and community leaders to add a crown jewel to a city home to an Olympic Training Center, and where the U.S. Olympic Committee has been headquartered since 1978. The Springs adopted “Olympic City USA” as a moniker in 2016.

But things haven’t exactly gone to plan for the $96 million project, which includes a museum, bridge, retail store, café and outdoor plaza. Museum officials are anticipating a deficit of at least $1 million for this year, as numbers of visitors lag far below projections.

The springboard to a comeback, however, could be the games themselves.

A four-day fan fest during the Tokyo Games featured sports demonstrations, food and beverages, and a 50-foot screen to watch the Tokyo Olympic Games. It also brought in a record number of visitors, with four of the museum’s five best-ever attended days occurring during the fan fest, said acting CEO Phil Lane. Numbers have been steadily increasing throughout the summer, he added.

John Register, a two-time Paralympian who emceed parts of the fan fest, said the events were “what we all wanted to see all along.”

People “want to come out and experience and be around each other,” he added. “And that’s what the Olympic and Paralympic games that we’re watching on television right now are alluding to.”

The museum was supposed to draw about 350,000 visitors a year and help attract apartments, a hotel, offices and other new uses to southwest downtown. But like many attractions across the country, those ambitious projections were dimmed by the coronavirus pandemic, which curtailed tourism and cut off the flow of out-of-town visitors expected to be crucial to the venue’s success.

Now, museum officials expect attendance for this year to be just over 100,000, Lane said.

Those lagging visitation numbers, combined with worse-than-expected special event bookings, sent the museum toward a more than $1 million deficit in 2021 and required it to dip into millions in federal funds via the city and county to help cover its expenses. In total, he pandemic led to a $6.5 million to $7 million hit on the museum’s finances.

The museum received $3.5 million in June from Colorado Springs Mayor John Suthers’ office that can be used for operating costs like rent and mortgage payments, utilities, employee payrolls and marketing.

“The city is going to do everything within our means to ensure the success of the museum and its organization. I mean, we are Olympic City USA,” Suthers’ chief of staff, Jeff Greene, said in July.

The Board of El Paso County Commissioners, meanwhile, agreed in June to provide $500,000 to the museum. The money comes from a portion of the nearly $140 million that the county was allocated under the American Rescue Plan Act.

The original cost of building the museum was funded in part by $26.2 million in state sales tax revenue set aside for City for Champions projects. The rest of the project’s cost was covered by private donations and proceeds from a Colorado Springs Urban Renewal Authority bond issue.

The museum’s pandemic-related struggles aren’t unique. According to an April poll by the American Alliance of Museums, roughly three-fourths of museum directors said their operating income had fallen an average of 40% in 2020 while they were closed for an average of 28 weeks because of the pandemic.

What’s inside and nearby

The 60,000-square-foot venue, at Sierra Madre Street and Vermijo Avenue, tells the stories of Olympic and Paralympic athletes, while featuring a dozen galleries that spotlight the Winter and Summer Games, an Olympic Hall of Fame, athlete training, medals and the Olympic Games’ Parade of Nations, among other areas.

The museum is home to a portion of the scoreboard from the Miracle on Ice, when a group of young Americans toppled a vaunted Soviet hockey team in the semifinals of the 1980 Winter Olympics in Lake Placid. The final score of that game, 4-3, is lit up on the score display in the museum.

Interactive displays and radio-frequency identification technology, meanwhile, will allow museum visitors to use a keepsake credential to customize their sport preferences and accessibility needs. Team USA athletes were involved and consulted for the project to ensure an authentic experience and inclusive design, museum officials say.

“It’s more than just a museum,” Register, the Paralympian and emcee, said. City officials hope that statement will prove to be true in a literal way, as the museum will anchor a newly developed part of downtown.

Pedestrians can now cross a 250-foot-long bridge from the U.S. Olympic and Paralympic Museum into America the Beautiful Park, which one developer said was long intended to serve as “the front lawn of the city.”

Since it opened in 2005, the front lawn had long been separated from the city, with rows of train tracks cutting it off from downtown and preventing residents from walking or driving from downtown to the park. Parkgoers could only reach the rest of downtown by using Cimino or Conejos Street, and then heading east on Colorado Avenue or Cimarron Street. That changed in July, when city officials officially opened the Park Union Bridge, which reaches across the river of steel and wood and connects the new museum and the park.

On the other side of the museum, the front plaza of the museum spills onto the newly redesigned, pedestrian-friendly Vermijo Avenue, which extends to the Colorado Springs Pioneers Museum at Tejon Street.

The new infrastructure is intended to enliven the growing city and elevate its profile. That’s a worthy cause by Register’s standards.

“We are global citizens, not Colorado Springs citizens,” he said. “And I think the Olympic and Paralympic museum showcases just that.”

Evan covers justice and public safety for The Gazette. He is a Colorado Springs native and graduate of The Medill School of Journalism at Northwestern University.