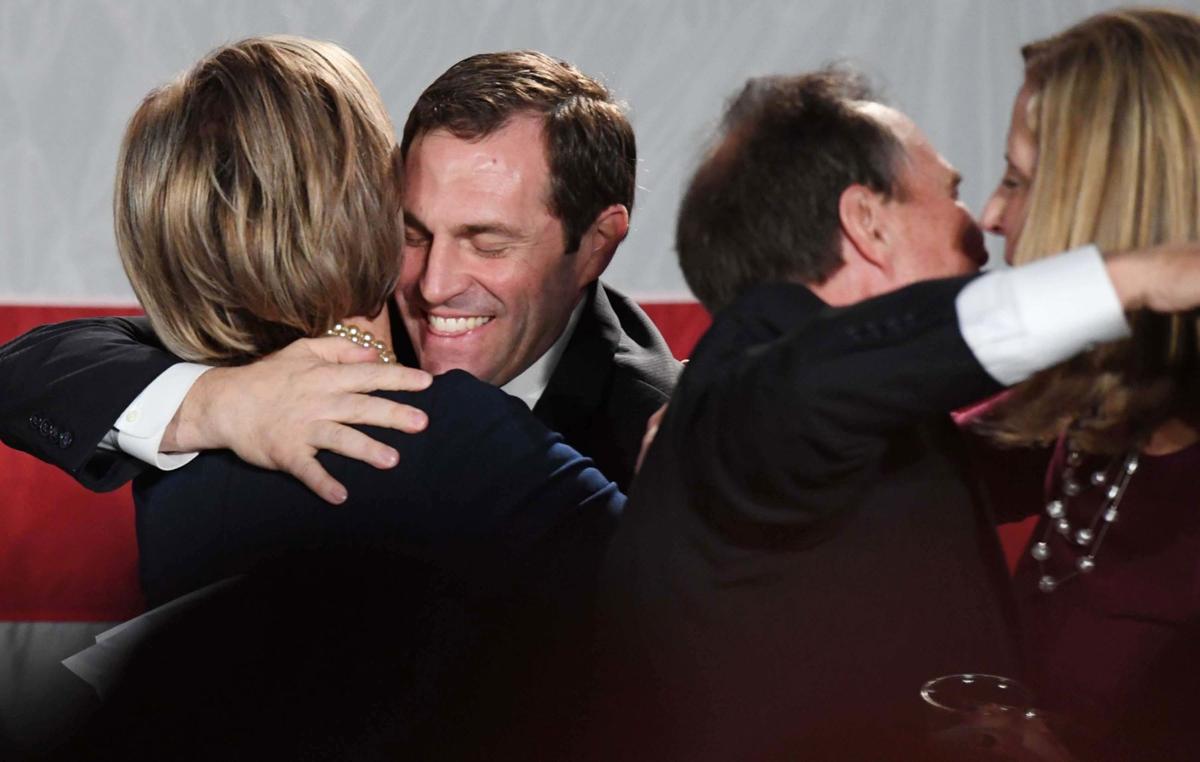 Colorado Senate winners celebrate as State Sen. Leroy Garcia addresses the crowd at the watch party for Colorado Democrats at the Westin Hotel in downtown Denver before the polls close. (Photo by Jerilee Bennett, The Gazette) 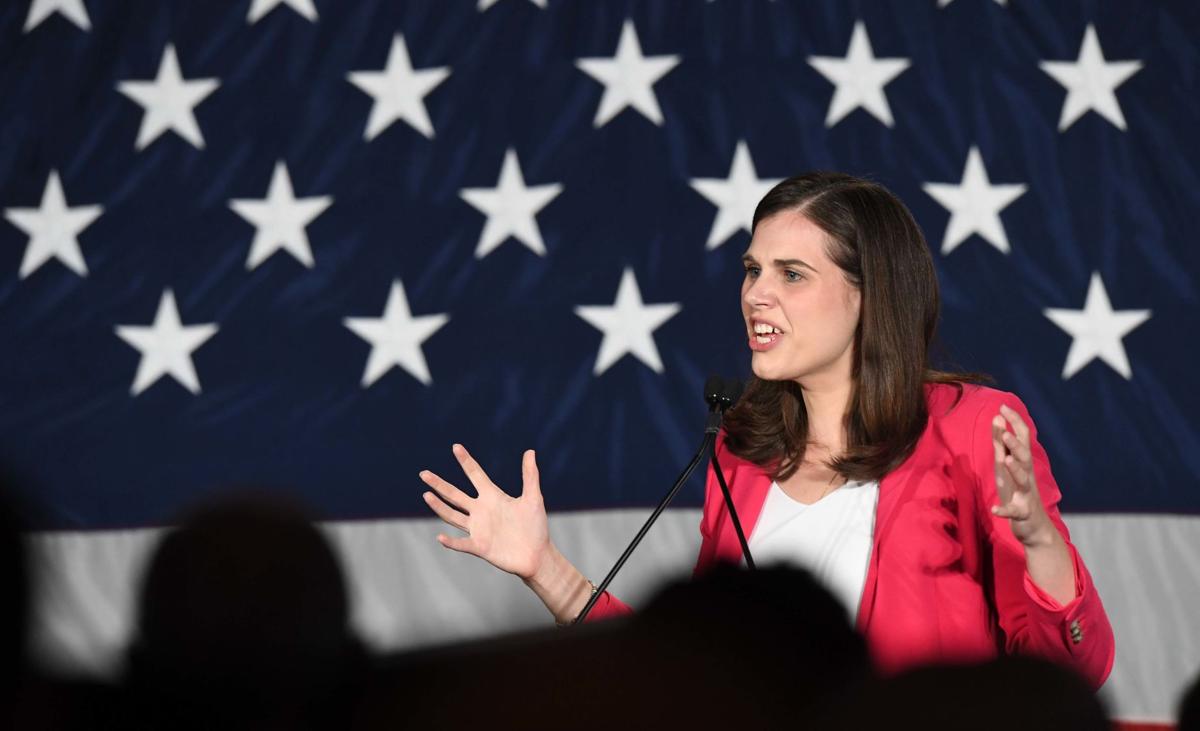 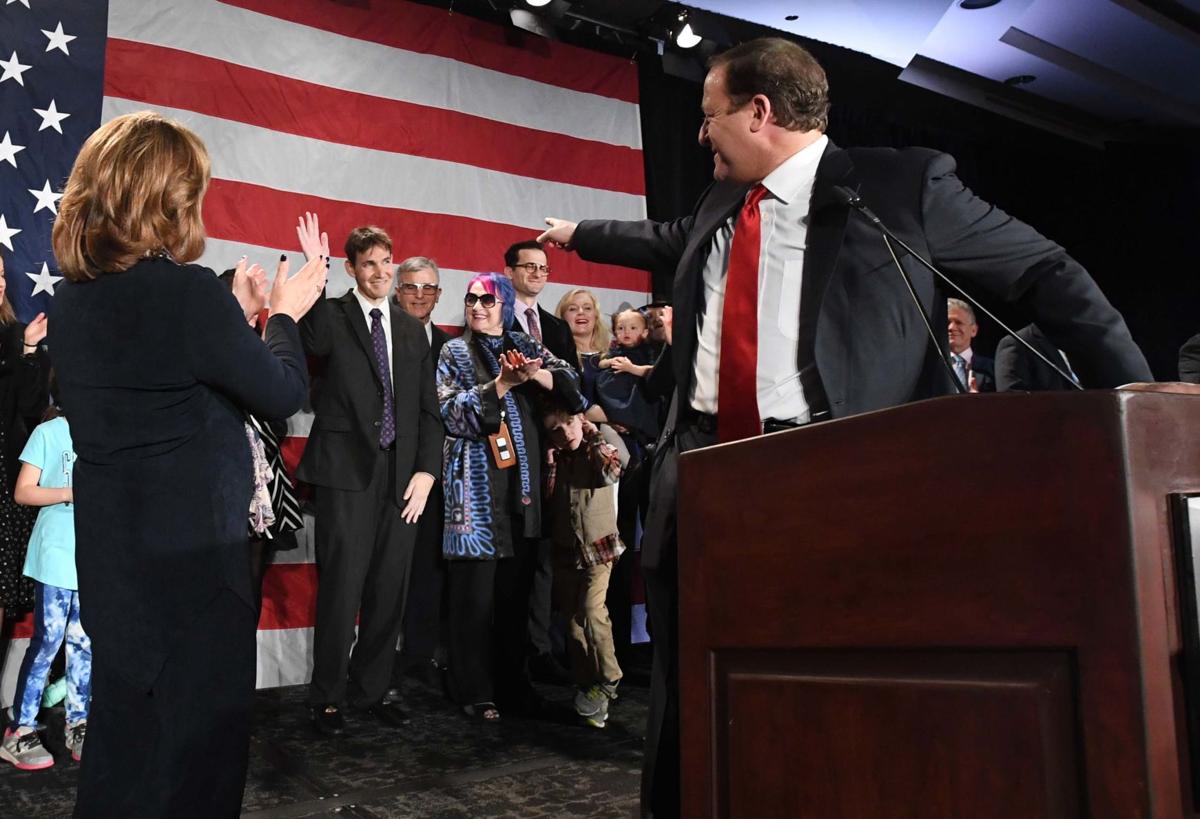 Colorado Gov.-elect Jared Polis acknowledges his partner, Marlon Reis, while giving his acceptance speech at the watch party for Colorado Democrats on Tuesday night at the Westin Hotel in downtown Denver.

Winning Democratic senators — many of them women — gather to celebrate Tuesday night in downtown Denver . Sen. Leroy Garcia of Pueblo, applauding at center, addressed the crowd. Garcia is the minority leader and might be voted in as Senate president.

Colorado Senate winners celebrate as State Sen. Leroy Garcia addresses the crowd at the watch party for Colorado Democrats at the Westin Hotel in downtown Denver before the polls close. (Photo by Jerilee Bennett, The Gazette)

Colorado Gov.-elect Jared Polis acknowledges his partner, Marlon Reis, while giving his acceptance speech at the watch party for Colorado Democrats on Tuesday night at the Westin Hotel in downtown Denver.

Winning Democratic senators — many of them women — gather to celebrate Tuesday night in downtown Denver . Sen. Leroy Garcia of Pueblo, applauding at center, addressed the crowd. Garcia is the minority leader and might be voted in as Senate president.

Here’s what jumped out to Colorado Politics about midterm election results.

When Colorado’s last Republican governor was first elected in 1998, Bill Owens spoke of specific projects with specific plans to pay for them. That worked then, but this year Republican Walker Stapleton, the self-described “numbers guy” in the race, offered practicalities and balanced books while his Democratic opponent offered soaring aspirations and vague means of paying for them.

Jared Polis promised universal health care, all-day preschool and kindergarten, and 100 percent renewable energy by 2040. His re-election in four years and his ultimate legacy might be measured against whether he can deliver.

Polis says a number of his proposals can be achieved without raising taxes, but for the others, pulling them off could be tough, given that Colorado’s Taxpayer’s Bill of Rights requires voter approval to increase taxes. And on Tuesday, voters showed that even when they like Democrats, they still don’t like taxes.

Women, Democrats and people without a party, oh my

Call it a blue and pink wave.

There was never much of a mystery about whether women voters would drive the outcome of this election. Before President Donald Trump took office, the left galvanized a movement over his crude remarks and position on abortion.

The state Senate added five women in the Democrats’ column due to unaffiliated voters strongly leaning toward Democratic candidates and women on the crest of the #MeToo movement. In the last midterm election, 3 percent more women than men voted. In this election, that lead grew to 9 percent.

All totaled, this was a $250 million campaign spending season in Colorado. In 2014, spending was just under $168 million.

Whether big chunks of that are coming from the back pocket for self-funding candidates — like Polis, who set new records, or Republicans Walker Stapleton and Victor Mitchell, who also chipped in millions of their own moolah — or from dark money from those who just love good government and don’t want credit for it, you must have a big pile of cash to play at Colorado’s political game.

Stapleton was a rich guy who faced a richer guy. The poor guys either never got in, or — in the case of Tom Tancredo, Cynthia Coffman, George Brauchler and Ed Perlmutter, who all thought they could run for governor at some point — never got very far.

Voice of America on Sunday reported this midterm to be the costliest in history and cited Colorado as one of the states leading the way on campaign spending. Dollars spent in the 2018 election cycle began breaking records almost as soon as candidates announced they were running and ballot measures started collecting signatures. It started last year when Mitchell and Polis began dumping millions of their own fortunes into the gubernatorial race. Stapleton — with backing from deep-pocketed friends and relatives — tried to keep pace but couldn’t.

In the state Senate, Colorado Politics found that at least $25 million was spent by outside groups on just five races, including more than $4 million in the last 10 days before the election. The five Democratic women elected to the state Senate outspent their Republican opponents by huge margins. For example, in Adams County, Democrat Faith Winter spent $372,476 to $59,139 spent by Republican incumbent Beth Martinez Humenik. That margin was the norm for all five races. Republicans more than made up for it, though, by letting outside groups do the heavy lifting.

Not so much for rural areas

Neither gubernatorial candidate offered a very specific or particularly coherent plan to help rural Colorado, where federal tariffs and jitters over the next federal farm bill have voters and communities on edge. Polis talked about the need for rural broadband, while Stapleton talked up opening more field offices in small towns to help people find existing state services. That’s not much for a huge area of Colorado and a huge area of need for state government.

An Oct. 6 report from Colorado Politics found that one of the biggest concerns for rural Coloradans is how legalized — and black market — marijuana is causing headaches in employment, crime and community services such as health care and homelessness. Cracking down on pot was an issue neither gubernatorial candidate dared to touch.

Look, Polis was expected to win almost from the get-go, and polls showing him with a 7-point lead in the closing weeks turned out to be spot on in final unofficial returns. But did anyone expect to see Democrats so thoroughly sweep the ticket?

In fact, Democrats practically wiped out the Republican bench for the next gubernatorial run in 2022.

The state treasurer’s office has been seen as a launching pad for the governor’s office. That’s where the last Republican governor, Bill Owens, came from, as well as Stapleton (and Democratic gubernatorial candidate Cary Kennedy) this year. Democrat Dave Young won that seat on Tuesday over Brian Watson, a Republican up-and-comer who has been eyeing the governor’s mansion for years.

Proponents of tax hikes on this year’s ballot hoped to cash in on what was expected to be a good year for liberal causes. Those hopes skidded into a ditch.

The statewide ballot asked for new taxes for schools and transportation. But Coloradans maintained their reputation for being tax-averse, soundly rejecting the two tax measures.

While Colorado Democrats are rubbing their full electoral bellies and figuratively licking their chops at the prospect of unseating U.S. Sen. Cory Gardner in 2020, there’s still a matter of governing.

If Polis genuinely pursues his campaign promises of free all-day preschool and kindergarten, universal health care and a throttling of the oil and gas industry for the sake of green energy, Democrats could create a tidal wave that washes out their candidates in two years.

The last time Democrats controlled both chambers of the Legislature, their aggressive moves on such issues as gun control were met with two successful recall elections and a Republican majority in the state Senate.

While Democratic candidates had an undeniable edge this year, the fate of a handful of ballot initiatives might have more accurately expressed Colorado’s true nature.

Voters who were leaning left this year still crushed tougher regulations on the oil and gas industry, while rejecting tax increases for schools and roads. (To be sure, the same votes also roundly rejected conservative-driven ballot measures aimed at the same transportation and oil and gas issues.)

If Democrats drive the state’s agenda to the left, they very well could drive voters to the right in the next election. That could be good for Gardner — and Trump, as well.

The Colorado governor's race turned on aspirations, financial realities and a blue wave of support for Democrats, drowning Republican gubernatorial nominee Walker Stapleton in favor of Democrat Jared Polis, who will become the first elected openly gay governor in the U.S., and the state's first Jewish governor.