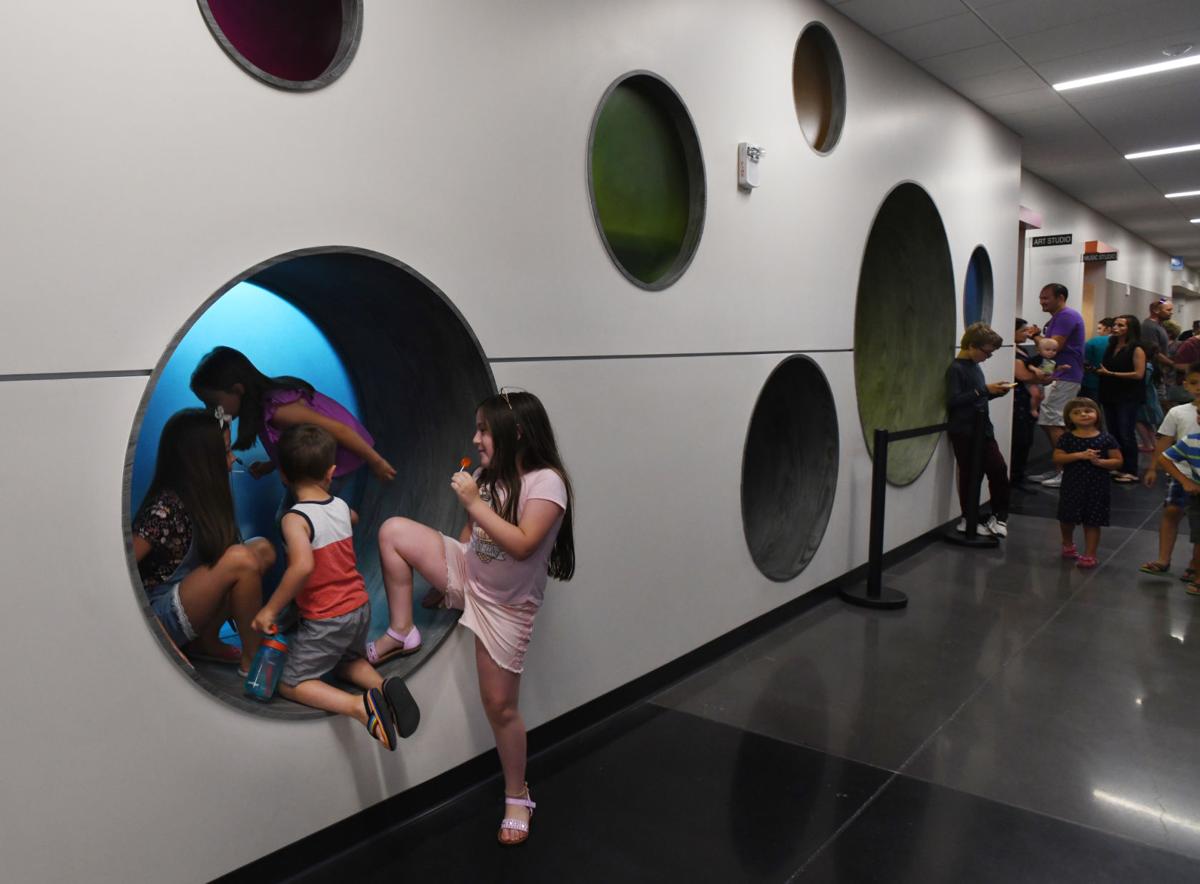 A new elementary school in D-49 opened to oohs and ahhs from parents and kids Monday. Future students Harper Felder, left, and Jackson Bruce climb into one of the colorful architectural circles. 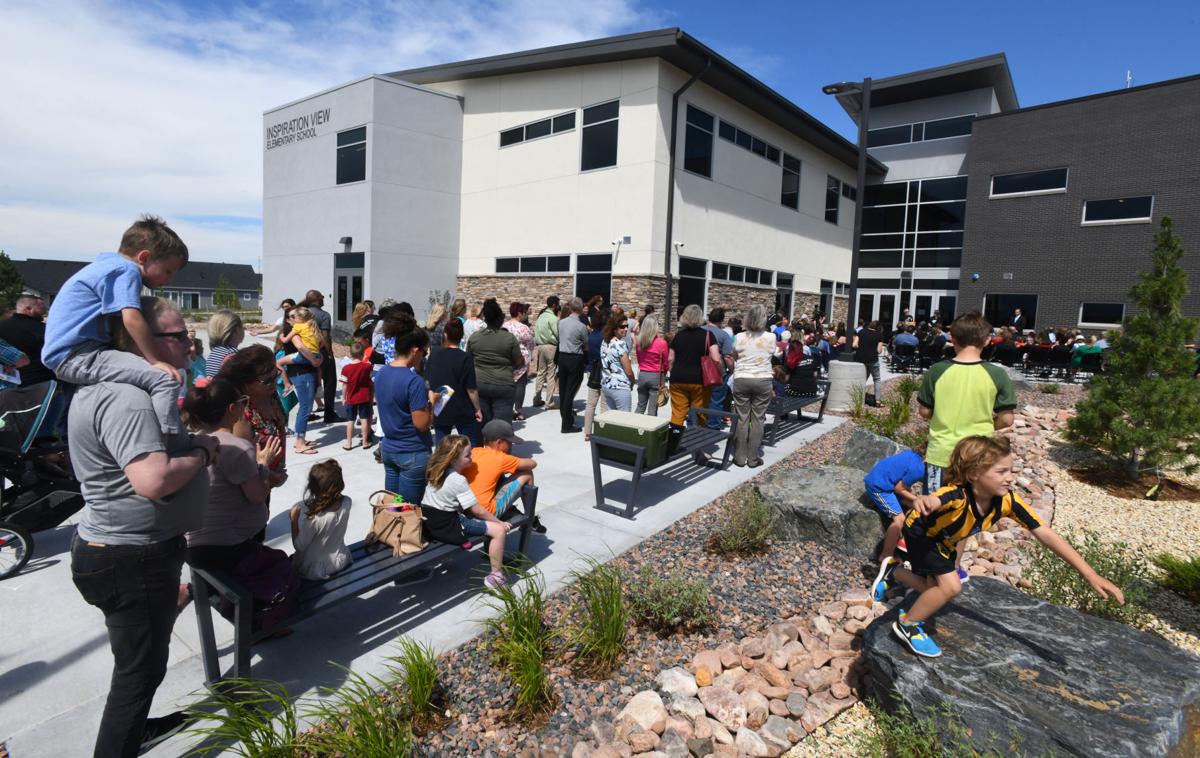 A new elementary school in D-49 opened its doors to parents and kids Monday. While speeches of gratitude were being given to the crowd waiting to get into Inspiration View Elementary School, some of the kids were trying out the landscape rocks in front.

A new elementary school in D-49 opened to oohs and ahhs from parents and kids Monday. Future students Harper Felder, left, and Jackson Bruce climb into one of the colorful architectural circles.

A new elementary school in D-49 opened its doors to parents and kids Monday. While speeches of gratitude were being given to the crowd waiting to get into Inspiration View Elementary School, some of the kids were trying out the landscape rocks in front.

Building a brand new school from the ground up seems easier when there’s a distinct focus, and Inspiration View in School District 49 has followed that edict.

“Everything we chose is very purposeful,” said Kristy Rigdon, principal of the elementary school, which opened Monday with a ribbon-cutting ceremony.

From the arts-integrated curriculum and flexible classroom space to the Flyers moniker and Pegasus mascot, the design and culture of the newest D-49 school have evolved from deliberate steps centered on art.

“It’s not so much about creating artists as it is creating students who can communicate, collaborate and problem-solve through that creative process,” Rigdon said.

Although it’s still July, students who came to the ceremony for a sneak peek at their new school said they’re ready to start classes next week.

“I’m happy because it’s a really pretty school,” said 8-year-old Harper Felder, who will be a third-grader when the school bell rings for the first time Aug. 2.

“My mom told me it was a new school, and when we would drive by it, I really wanted to come here.”

The $24 million building — at 9233 Vista del Pico Blvd. in Banning-Lewis Ranch in east Colorado Springs — is the second new traditional elementary school to open in D-49 in two years, thanks to a 2016 voter-approved mill levy override.

With residential construction popping up on El Paso County’s eastern plains as fast as the race to recess, more classrooms are needed, according to district enrollment forecasts.

D-49 is the Pikes Peak region’s third-largest district, with about 22,400 students last school year and expectations for hundreds more each year.

The arts theme emerged from a survey of D-49 parents, students and staff on what was missing and should be in the district’s portfolio of schools, said Rigdon, who’s been working for the district for 12 years, most recently in the administration as coordinator of literacy performance.

A kaleidoscope of the art forms, from performing and musical to written, spoken, drawn and sculpted, will be woven into core subjects.

The teaching approach is based on a model from the John F. Kennedy Center for the Performing Arts, which Rigdon said is considered the preeminent leader in arts integration in schools.

Through this method, students construct and demonstrate their understanding of subject matter through an art form, she said.

In studying the water cycle, for example, students might show they know how precipitation and condensation work by choreographing a dance.

“It’s not just, ‘Let’s do a worksheet about what we know about the water cycle,’ but let’s go to a deeper level,” the principal said.

Or, while studying fractions in math, students also will study how musical notes are all about fractions.

The school has hired a drama teacher, which Rigdon said is rare for an elementary school, and students will learn support skills such as how to run lighting and sound, along with being on stage.

Inspiration View will open with about 300 kindergarten through fifth-grade students, with the capacity to grow to 600. It also has a preschool room.

Part of the two-story, 70,554-square-foot building will serve the Falcon Homeschool Enrichment program for homeschooled children.

Students are coming from the neighborhood, other D-49 elementary schools and even from other districts because of the instructional model, Rigdon said.

That’s why Monica Pollok is moving her daughter from a nearby D-49 charter school to the new one.

“As soon as we heard it was going to be art-based, we switched,” she said. “We’re just really excited.”

“It just makes me feel like I can inspire myself to do what I want,” said 8-year-old Sofia Pollok.

The arts focus differentiates the school, said mom Missy Cotterman, whose son, Caleb, will attend Inspiration View. She also will work there as a health assistant.

“The arts are so important and something that’s lacking these days,” Cotterman said. “Our principal and her passion is amazing. Passion drives things and makes them successful.”

With 57 universities in the state, Colorado Springs ranked 12th in a study of the nation's most educated cities, reports financial website WalletHub.