Giuliani was one of the key lawyers in Trump’s efforts to “Stop the Steal” and contest the race that he lost to President Biden, making unsubstantiated claims of widespread and massive voter fraud and pushing wild allegations about the Denver-based company. Biden defeated Trump 306-232 in the Electoral College.

“Acting in concert with allies and media outlets that were determined to promote a false preconceived narrative about the 2020 election, Giuliani launched a viral disinformation campaign about Dominion that reached millions of people and caused enormous harm to Dominion,” the company claimed in a 107-page complaint filed Monday.

“As a direct, foreseeable, and intentional result of that viral disinformation campaign, Dominion has suffered the following single and indivisible injuries: Dominion employees have been stalked, have been harassed, and have received death threats; Dominion has been forced to make an expenditure of money to remedy the defamation and to protect the lives of its employees; Dominion has lost profits; and Dominion’s reputation has been irreparably damaged.”

Dominion sent Giuliani a notice of his obligation to preserve documents related to Dominion back on Dec. 22, and, after the storming of the U.S. Capitol, it sent him a follow-up letter on Jan. 10 about the “recent violence and your continued defamatory claims about Dominion.”

On Jan. 8, the company filed a similar lawsuit against attorney Sidney Powell. CEO John Poulos had confirmed in December that Dominion would file defamation lawsuits against Powell and others who have spread what he characterized as “falsities” regarding the company and the presidential election.

The new lawsuit claimed that “although he was unwilling to make false election fraud claims about Dominion and its voting machines in a court of law because he knew those allegations are false, he and his allies manufactured and disseminated the ‘Big Lie,’ which foreseeably went viral and deceived millions of people into believing that Dominion had stolen their votes and fixed the election.”

Dominion lawyer Thomas Clare claimed Giuliani “peddled his lies about Dominion in the court of public opinion, in concert with reckless media outlets that knowingly gave him a global platform to spew baseless falsehoods and to undermine confidence in our democracy” and that “after we asked Giuliani to retract his false claims, he doubled down and said he'd love to take discovery on Dominion,” adding that “we’re here to grant his wish and to remind him that discovery is a two-way street.”

“Rudy Giuliani actively propagated disinformation to purposefully mislead voters. Because Giuliani and others incessantly repeated the false claims about my company on a range of media platforms, some of our own family and friends are among the Americans who were duped,” Dominion CEO John Poulos said on Monday. “Not only have these lies damaged the good name of my company, but they also undermined trust in American democratic institutions, drowning out the remarkable work of elections officials and workers, who ensured a transparent and secure election. The thousands of hand recounts and audits that proved machines counted accurately continue to be overshadowed by disinformation.”

Giuliani did not immediately respond to the Washington Examiner's request for comment. 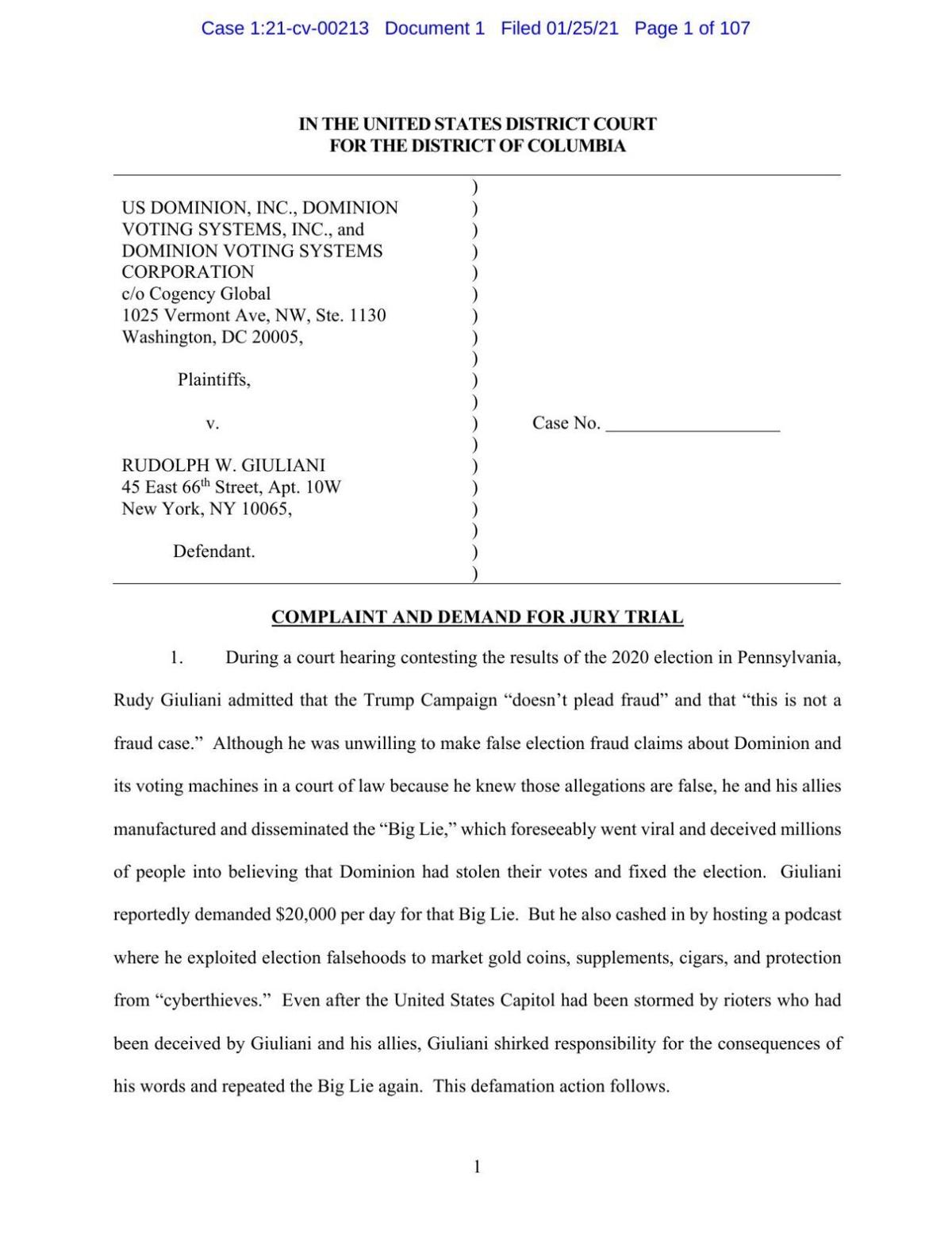 A prominent nonprofit policy research organization, MITRE Corp., is out with a report on its four-month review of the 2020 election and found no evidence that Dominion Voting Systems or others skewed the results.

Mike Lindell, like Trump lawyers Rudy Giuliani and Sidney Powell earlier, stands to lose $1.3 billion in the defamation lawsuit for his aggressive promotion of a theory that the election was stolen because Dominion voting equipment flipped votes to Democratic nominee Joe Biden.

The CEO aggressively pressed the case that the November election was stolen from President Donald Trump. Last month Dominion, a major election equipment and software maker, filed a $1.3 billion defamation suit against Lindell over his allegations that the company is at the center of a sprawling international conspiracy to switch votes and steal the election.

The arguments made in a federal court in Denver Tuesday afternoon could offer a forecast of litigation to come over whether the November election was stolen and who bears responsibility if it was, or if the allegations are merely conspiracy theories and defamation.

Fox is one of several defendants, including former President Donald Trump's legal team, facing lawsuits alleging they disregarded the truth that the November election was not stolen from the president.

"Did you do any research, did you confirm with any other experts: 'Hey, is this guy just making this up or is this true,' or did you just take it at face value and include it based on that?"

My mind has been living in 2005 lately. No, not Hurricane Katrina, Bush's second term or even the launch of YouTube, but remembering the late Myrna Been.

A pair of local lawyers scolded by a federal magistrate over their lack of evidence of a stolen presidential election last Friday asked for and were denied another hearing Wednesday afternoon.

The CEO of Dominion Voting Systems has reportedly followed through on his intent to sue attorney Sidney Powell for defamation.