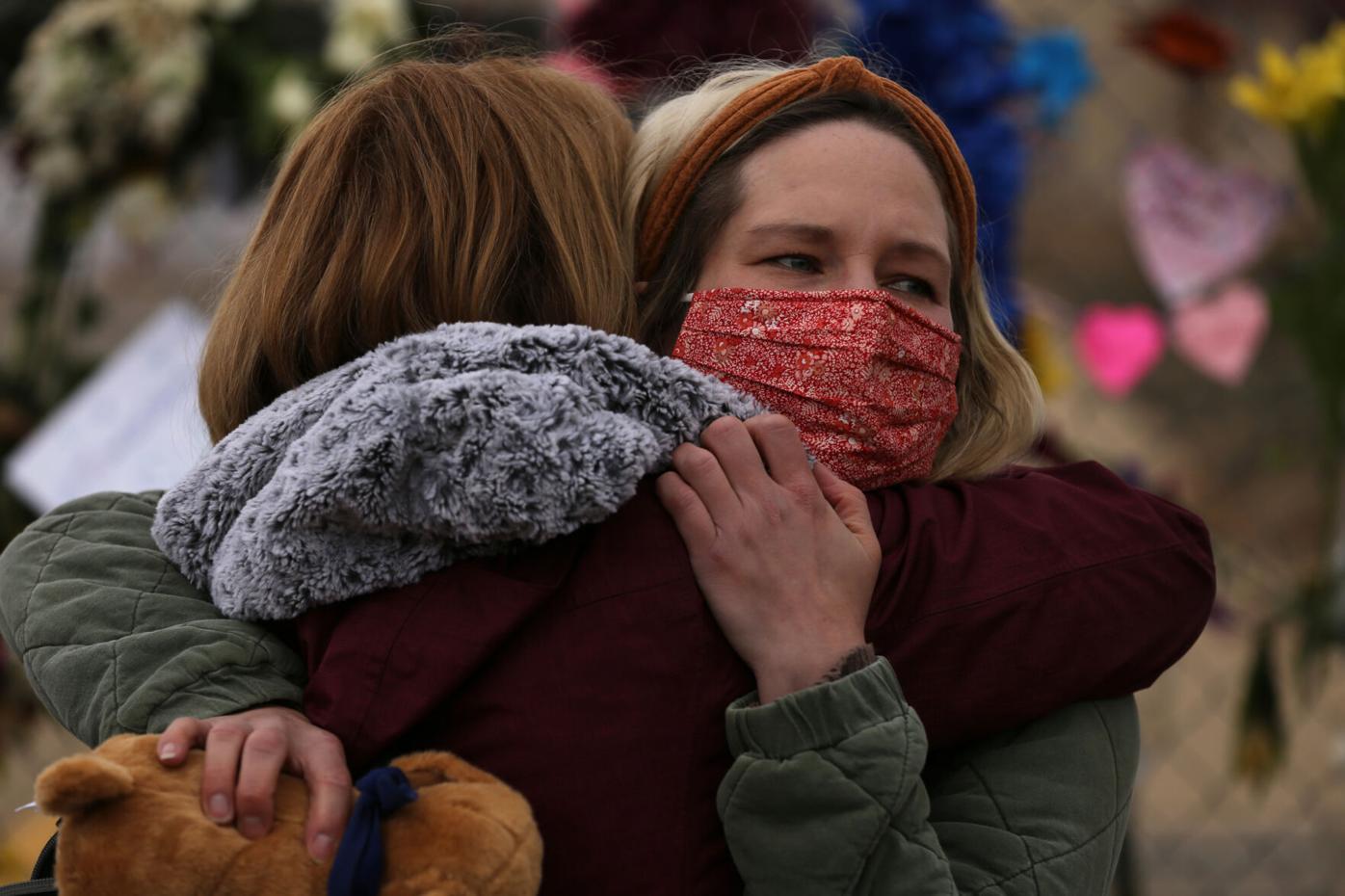 Gazette file Kelly Austin Davis, facing camera, receives a hug from someone while visiting the memorial at the King Soopers on Table Mesa Drive in Boulder on March 26. Austin Davis was in the store when a gunman killed 10 people on March 22. 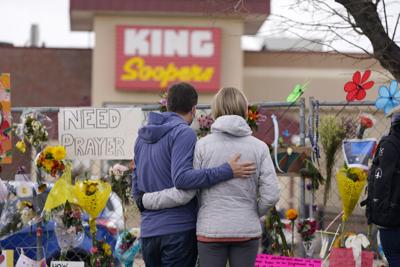 The 33-year-old Denver man liked to strap three handguns on to his belt for his sessions with his psychiatrist and often made veiled threats, telling her once that she should take more care about letting people like him come back to her office.

Police later found a cache of 33 firearms in his apartment and learned he was buying more, purchasing as many as three guns per month. A neighbor of the man once had attempted to kill herself with one of his weapons he left casually out in the open in his kitchen.

Get the latest Gazette update by signing up for our newsletters

He had been accused of shoving a Glock handgun in the face of a resident who asked him to clean up his dog’s feces, but the case fell apart after the alleged victim got scared and refused to cooperate. The psychiatrist was growing more and more concerned. Her client was making suicidal statements and having more extreme outbursts.

In the end, a Denver judge granted Denver police an extreme risk protection order under Colorado’s new red flag gun law, ordering the man to turn over all his firearms to police for one year.

The new law, now in effect for nearly 15 months, is supposed to give law enforcement agencies and concerned family members a powerful tool to help prevent mass shootings like the attack at the King Soopers in Boulder that claimed 10 lives.

If the law had been used against Ahmad Al Aliwi Alissa, charged in the King Soopers attack, a judge could have forced him to relinquish the AR-556 pistol that police say he would go on to use to kill 10. The judge would have had to find that Alissa posed a credible threat of violence to others or himself for an extreme risk protection order to be granted. Alissa’s sister-in-law told police that Alissa spooked relatives by playing with the gun in the home. She said she thought he kept the gun in his bedroom.

The law is having success in some areas of the state, but its application is inconsistent, according to a review by The Gazette of Colorado’s red flag gun cases. The review found that most of the extreme risk protection orders granted by judges came from cases initiated by police.

“I think it’s worked exactly as it was designed to work,” said Douglas County Sheriff Tony Spurlock. “In the cases where extreme risk protection orders were issued, individuals had extreme mental health disorders, and they were making threats to themselves or other people and had access to weapons. The law allowed the removal of those weapons. People are still alive, and hopefully the individuals who made the threats are getting treatment.”

Court documents reviewed by The Gazette showed some law enforcement agencies are using the law to force dangerous individuals, almost all of whom either exhibited extreme psychosis or made suicidal or homicidal threats, to relinquish firearms. Police say they’ve used the new law to avert potential catastrophes.

State Rep. Tom Sullivan, a Democrat from Arapahoe County, the author of Colorado’s red flag law and whose 27-year-old son Alex was killed in the 2012 mass shooting at an Aurora movie theater, said the law, for the most part, is having the intended effect.

He said that when he was researching the same kinds of laws in other states, he estimated that Colorado would probably have about 150 extreme risk protection orders each year.

The orders have been requested overwhelmingly for men rather than women, and frequently for younger men dealing with substance abuse and mental health issues.

The law has resulted in at least 283 guns being at least temporarily confiscated, with some people having to relinquish dozens.

But the law isn’t uniformly used the in different locales of the state.

Denver police used the new law 31 times, more than any other police agency in the state. In Denver, the police department formed a dedicated unit to concentrate on filing red flag gun cases, and lawyers in the city attorney’s office help shepherd them through the court system.

Denver Police Division Chief Joseph Montoya explained that street officers have been trained on the law. If a situation appears to qualify for an extreme risk protection order, then the detectives Lt. Hernandez oversees get involved for a deeper investigation and analysis, including a review of an individual’s criminal background and their eligibility to legally own firearms. If an extreme risk protection order is warranted, attorneys help prepare and file the petitions.

“We are utilizing it to the letter of the law,” Chief Montoya said. “We take it seriously, because we want to prevent violence.”

Meanwhile, neither the El Paso County Sheriff’s Office nor the Colorado Springs Police Department have brought a single red flag gun case to a judge. El Paso County Sheriff Bill Elder opposed the law when it was moving through the Colorado Legislature and gave an interview with "60 Minutes" after its passage, stating the Legislature should have instead pushed for more funds to help the mentally ill.

He has since clarified that while his deputies won’t petition to seize weapons, they will carry out judicial orders requiring the surrender of weapons.

Rep. Sullivan said he thinks the differences in how different police agencies are using the law has to do with education about it.

“If the police don’t think of it as an option — if it’s not option No. 1 or option No. 2, like it seems to be in Denver — then there are going to be people who fall through the cracks,” he said. “So a lot of it is the training the men and women on our police forces are getting.”

The cases in Denver include an alcoholic who had been arrested 27 times, several involving alcohol and threats of violence. None of those arrests would have barred the man from owing a gun, according to an extreme risk protection filing from Denver Police. In that filing, an officer said the man shot up his oven, brandished a .357 at a person from the balcony of his apartment and threatened to shoot another individual’s dog. A judge ordered the man to surrender his firearm for a year.

Another successful filing by Denver police that resulted in a judicial order that a man surrender his guns involved 28-year-old Bryce Jordan Sidney Shelby, who told an undercover FBI agent he planned to assassinate Colorado Attorney General Phil Weiser and harm law enforcement officers and other government officials.

When it comes to someone other than police filing the petitions for the extreme protection orders, Rep. Sullivan said he thinks the issue is stigma.

“If someone doesn’t want their son, for example, to be labeled as a threat, or as mentally deficient, sometimes they allow it to go on,” he said. “But that’s not an excuse. A lot of dominos fell before someone walked into that grocery store and started killing people. So we have to tell those parents that this is the alternative. If you don’t do something, this is what can happen. We have to talk about it.”

Montoya urged those worried about an individual who might pose danger to themselves or others to take some kind of action.

“If you are concerned about a friend or a family member who is suffering from some sort of mental health issue, and you know they are in possession of a weapon or weapons, please make outreach to somebody, whether it’s law enforcement, mental health, a family physician, whoever it might be, please tell someone about it,” he said. “Please, please make outreach to somebody.”

When the law was winding its way through the Legislature, it prompted lengthy hearings and divisive debate. Opponents vowed lawsuits and Sheriff Spurlock’s support prompted an effort to recall him, which eventually fizzled. Spurlock pushed for the bill’s passage after one of his deputies, Zackari Parrish, was killed in a shooting. Lawsuits seeking to block the law failed.

Not all of petitions are successful. Filings denied by judges include one from Susan Holmes, a Larimer County woman, against the Colorado State University police officer who shot and killed her teenage son. In denying the petition, the judge noted that Holmes wrote on her petition that the police officer was a family member, specifically stating that they had a child together, when neither was true.

Spurlock said the fact that case went nowhere shows judges are using discretion in deciding when to require the surrender of firearms and when to reject an unsound petition.

When credible threats are made by an individual who hasn’t yet followed through on the threats, the red flag gun law can assist law enforcement in protecting the public, Spurlock said.

Douglas County sheriff’s deputies grew concerned when they encountered a 60-year-old man who appeared to be struggling with issues of mental illness. The man adorned himself in law enforcement-style attire, including a fake badge and a tactical vest labeled “deputy sheriff.” He claimed “special forces” training when he had never served in the military or law enforcement.

He liked to call police to his home. Once he claimed he’d found a mysterious assailant in his bedroom. Another time he said a hitman shot him while he was getting his mail when deputies could find no gun wound. He said it was the eighth time that he’d been shot.

On New Year’s Eve 2019, a detective investigated a series of texts the man sent to his former wife.

“Until death do us part. Sleep tight, baby girl.”

“There is nothing else you can do but scream and hide.”

“I just don’t know what I’m going to do when I find you. The options excite me.”

“Do you think I’m a good sniper, or an exceptional one.”

And in June, a corporal with the Douglas County Sheriff’s Office testified that his investigation found that the man had amassed 59 firearms and more than 50,000 rounds of ammunition, and appeared to have had a bunker built for survival. The judge granted an extreme risk protection order.

“I believe there should be less government,” said Spurlock, a Republican. “But it’s also the government’s sole responsibility to keep people safe and provide an environment to keep them safe. This is a tool that does that very thing.”

A team of police officers wasted no time in their response to reports of an active shooter in a Boulder supermarket Monday, according to law e…

The El Paso County Sheriff's Office announced Tuesday how to make donations for the family of fallen deputy Micah Flick.