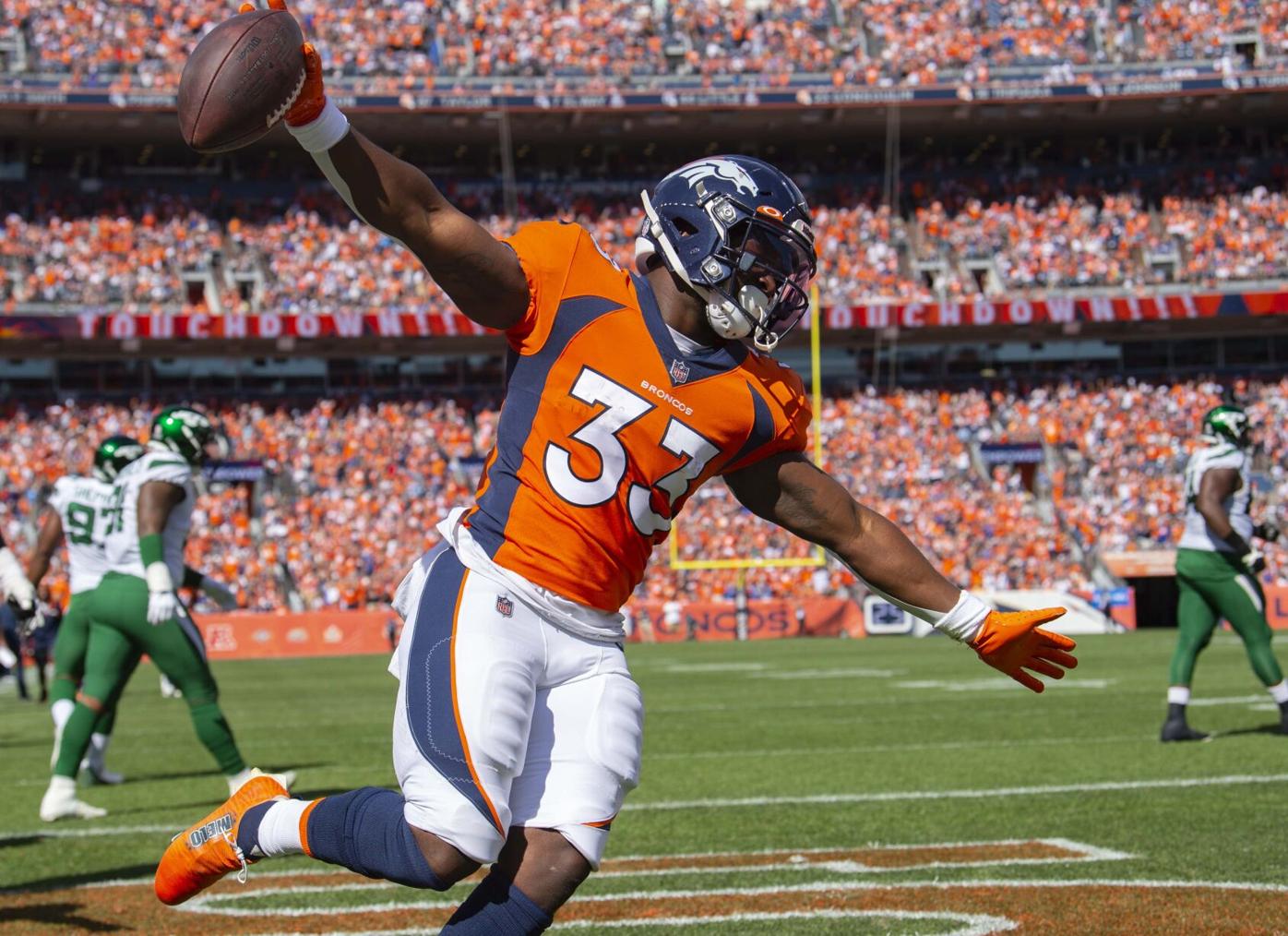 Broncos running back Javonte Williams celebrates after scoring Sept. 26 against the Jets on a 1-yard run in Denver. 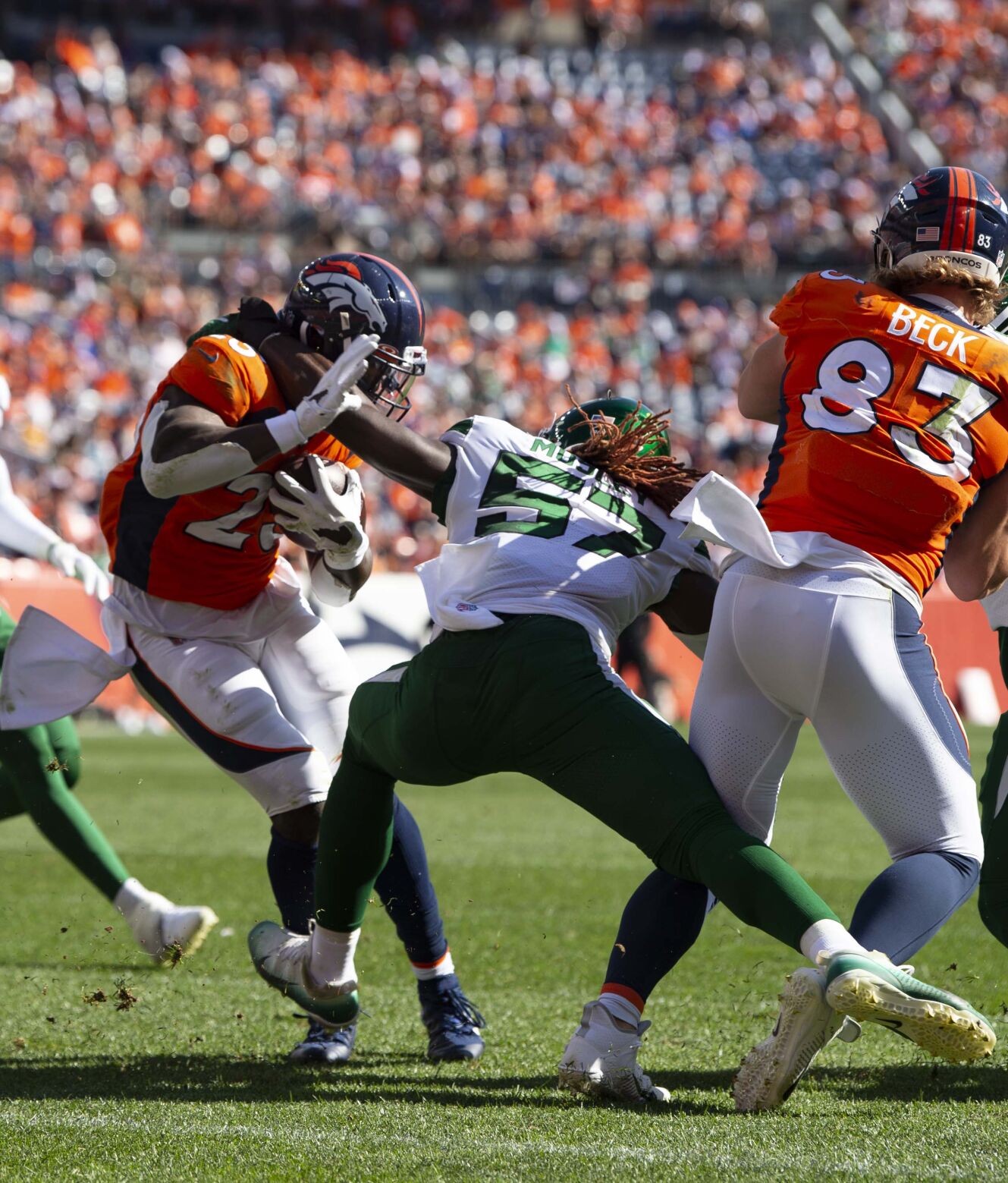 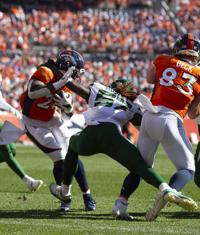 Denver Broncos running back Melvin Gordon III (25)runs past New York Jets middle linebacker C.J. Mosley (57) for a touchdown in the second quarter to give the Broncos a 17-0 lead Sunday, Sept. 26, 2021, at Empower Field at Mile High in Denver.

Broncos running back Javonte Williams celebrates after scoring Sept. 26 against the Jets on a 1-yard run in Denver.

Denver Broncos running back Melvin Gordon III (25)runs past New York Jets middle linebacker C.J. Mosley (57) for a touchdown in the second quarter to give the Broncos a 17-0 lead Sunday, Sept. 26, 2021, at Empower Field at Mile High in Denver.

DENVER — We do this, you know? We spend all year, every day, every sports talk show, yapping on and on about the Broncos quarterback.

Because it’s been this way for a while: The Broncos are a team that wins games on defense, like they did with emphasis Sunday in a 26-0 smashing of the New York Jets at Empower Field at Mile High. Poor Zach Wilson. That was the stuff nightmares are made of.

The next conversation is whether the Broncos — at 3-0 with wins against Doherty, Denver East and Cheyenne Mountain — are the real deal or simply a product of their CHSAA schedule.

But as 70,000 giddy fans left the stadium smothered in sunburns and hope, the Broncos turned 3-0 for the 12th time in 30 years. They made the playoffs eight times, missed ‘em four. Promising ratio, but nothing’s guaranteed.

Let me ask you: Are you buying or selling these Broncos? The opponents aren’t buying Teddy. That’s for sure. Each of the Giants, Jags and Jets A) should be relegated to the Big East and B) made it clear they don’t believe in Bridgewater.

That’s been a losing philosophy since Bridgewater has been nothing short of fantastic. He completed another 19 passes (out of 25 attempts) for 235 yards and a 104.6 QB rating Sunday. I'm most impressed how he escapes.

Now do it against the Ravens next Sunday and Broncos fans will have every right to dream big.

Because this defense, guys. I’m buying the heck out of this Broncos defense. Fangio looks like a kid who got every Lego he wanted for Christmas, and now he gets to build the most perfect Lego castle a living room's ever seen. They allowed one “real” touchdown against the Giants (Daniel Jones ran in a meaningless score with 1 second left), one touchdown against the Jaguars, and the Jets didn't score. That’s no joke. Buy, buy, buy this Broncos defense.

It’s tempting to board this Broncos train. But not yet, not after who they've beat. I thought the Giants were bad, then I saw the Jags. I thought the Jags were bad, then I saw the Jets. Combined, they’re 0-9. This will go down as the easiest opening stretch in NFL history. If there’s a way to wager the top three picks in the draft, the Giants, Jags and Jets is your trifecta.

There’s a pretty good chance the Broncos just beat the three worst teams in the NFL. But it’s kind of like playing Patty Jewett in Colorado Springs or Overland in Denver. You still have to hit the greens and make the putts all the same.

"You eventually have to play everybody," Fangio said.

Now the preseason’s over.

While it was nice of the NFL to gift the Broncos six exhibition games to break in Bridgewater, now the schedule starts for real: Ravens, Steelers, Raiders, Browns. Back-to-back-to-back-to-back. And here are seven reasons I’m holding my Broncos stock until after the Ravens game on Sunday: Jerry Jeudy, Josey Jewell, Bradley Chubb, Ronald Darby, Graham Glasgow, Dalton Risner and KJ Hamler. The Broncos finished the Jets game without seven injured starters just as the schedule toughens up.

The upcoming schedule is going to be a serious challenge.

But it’s also going to be a serious challenge for Denver’s opponents, because this Broncos defense is for real. Per usual it starts with Von Miller, who has a sack in all three games. Sunday he wore a leopard print cowboy hat that only the big man on campus can pull off. That bend is back. That swag is back. Von's back-back.

“It’s fun when everybody gets a turn to help out the team,” Miller said.

It is fun. Three games in, the Broncos are fun, and that’s more than you could say for a long time.

To tell the whole story, next up is Ravens quarterback Lamar Jackson, the best show in football; Big Ben and the Steelers; Derek Carr and the 3-0 Raiders; Baker Mayfield’s Browns. That’s fun, and it will show if the Broncos are for real. Other than the Broncos defense, of course.

This Broncos defense is absolutely for real.

DENVER — The message never changed on the Broncos' sideline.