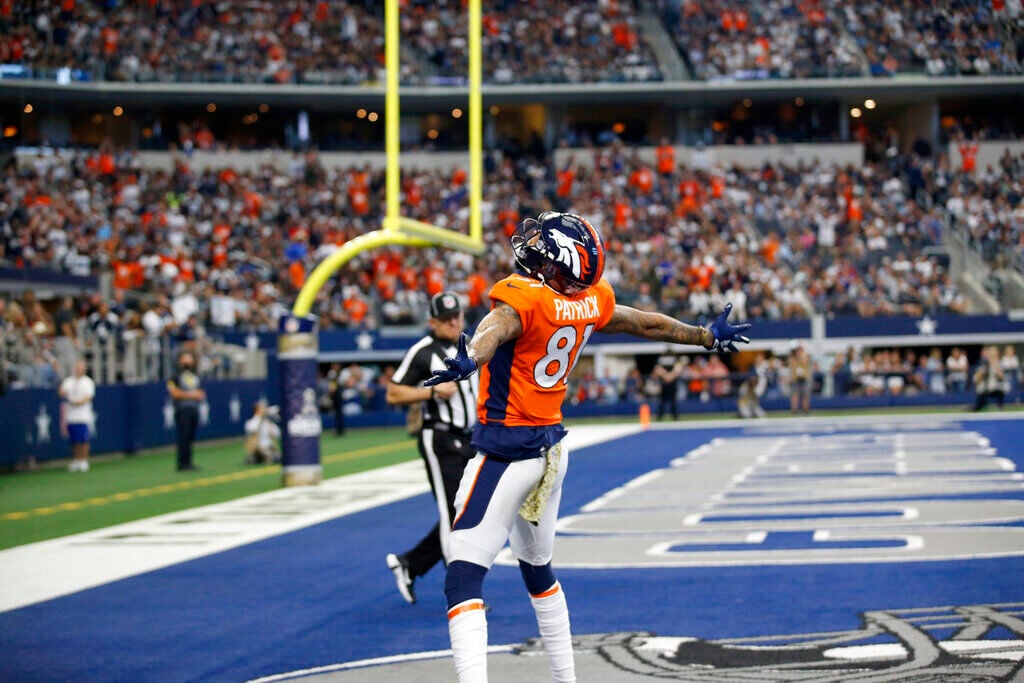 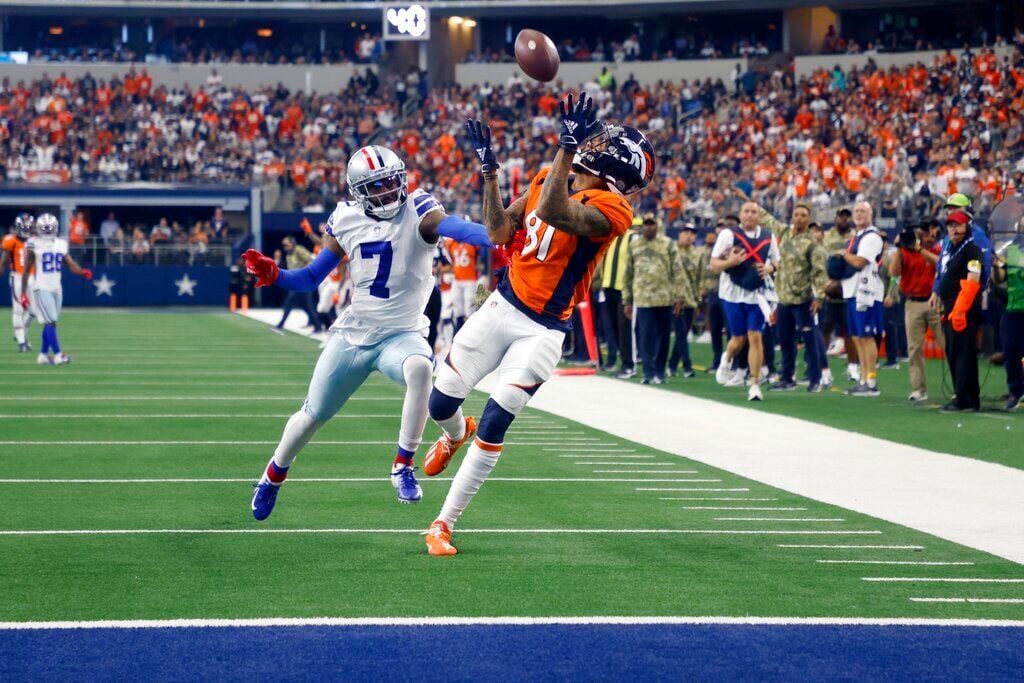 There were Texas-size stories that sprouted from the Broncos’ 30-16 demolition of the Dallas Cowboys at AT&T Stadium Sunday.

No Von, no problem. Vic Fangio got his groove back. Seventh-straight win over the Cowboys.

All those and more, because you don’t stumble into Jerry World and dominate the 6-1 Cowboys by chance or accident — unless you’re the Broncos, who've won four straight in Dallas.

What I’m saying is wide receiver Tim Patrick won’t make the short list of storylines after the Broncos took a fun route into the second half of the season. But I'll tell you what, if the Broncos are going to rebuild this thing into a Super Bowl contender in a year or three, it’s going to be fearless men like Tim Patrick leading them back.

Timmy Two Hands is a free agent after this season. I hope George Paton likes him as much as I do. En route to their coolest win in four years, the Broncos looked to Patrick to save the day — not Jerry Jeudy, not Courtland Sutton, not anyone else on offense. There hasn’t been a better Broncos win since they smashed the Cowboys 42-17 in Week 2 of 2017 — what sometimes seems like a lifetime ago.

The great Broncos teams had the great players, but they also had a bunch of free speech absolutists who shared what’s on their mind. Ask Shannon Sharpe about that. Or Aqib Talib.

Here was how Patrick responded after the Cowboys offense attempted not one, not two, but three fourth-down conversions: “That (expletive) disrespectful. They’re trying us.”

Swaggy T said going for it on fourth down means Dallas didn’t respect the Broncos offense.

Just speculation here, but Patrick’s motivation is not only because the other 31 teams passed on him in the draft. He’s showing off his resume to the Broncos as well. Shoot, his own team drafted three wide receivers in the top two rounds the last two years. That (expletive) disrespectful.

“Everybody was saying we haven’t beat a team over .500,” Patrick said Sunday. “Well, they had one loss and we beat them.”

The Cowboys haven’t beaten the Broncos since Ezekiel Elliott’s first year — on earth. If giving us the Metroplex is off the table, that level of dominance deserves Port Aransas and Redfish Bay, at least.

“You handled the trade with Von one way or another,” team captain Justin Simmons said. “I think you saw today how guys responded.”

Oh, right, the Von Miller trade. The Broncos are 1-0 without Von Miller. Here’s what I read into that turn of events: GM George Paton wasn’t lying when he said after the trade he’s not bailing on this season. It can be tough sledding trying to convince a rich veteran that a .500 record can be turned into something special. Look at some of the sellers at the trade deadline. The Broncos, Jaguars, Falcons all scored major upsets Sunday, the first games after the deadline when good players left town.

His so-so seasons with Vic Fangio will always be a mystery in the Von Miller era here.

Here was Von right before the trade: “I’ve won before. These guys haven’t won before.”

Come on, that’s oil and water, and it had been since their tough-love start. For whatever reason things never clicked with Von and Vic. Makes no sense considering their pedigrees, but here we are and Von Miller’s in Los Angeles.

The teams that actually turn around their seasons are probably the ones with the best young players. For one day, Broncos rookies were as good as any of the Cowboys: Jonathan Cooper, two sacks; Caden Sterns, interception; Javonte Williams, hair on fire; Quinn Meinerz, welcome. This was Fangio (present) and Paton's (future) best days yet on their respective jobs.

Week 1 AV (After Von) was a jarring success. If you’re going to debut a new era, building a 30-0 lead in Dallas is one of the better ways to do it. Credit Fangio, who saw his best player traded then shut out the NFL’s third-best offense for all but 4 minutes. That (expletive) impressive.

“They are super talented and they might score 35 points in every game the rest of the way,” he said of the Cowboys, who couldn’t manage any points until their ninth possession of the game.

Now do it again. Philly’s next, and the Eagles haven’t beaten a winning team.

The Broncos are 5-4 and a winning team in November for the first time since 2016. Doom and gloom all you want, but it sure beats trailing the Chiefs by four games before it’s turkey time.

“Our best players have got to play their best games in the biggest games,” Simmons said.

Tim Patrick is one of their best players and no advanced analytics or draft grade can convince me otherwise. The Broncos don’t let me inside their books, so who knows if it’s feasible to pay both Patrick and Sutton, another free agent? But an early contract extension to an undrafted guy who is seriously respected in the locker room sure would send a message that everyone’s getting a fair look.

Check out Patrick’s journey, consider what he did Sunday, and tell me this is not a guy you want in your huddle: Parents did jail time, he broke a leg and missed 18 months of college ball, no invite to the combine, skipped over in the draft... and he balled out again, posing on the Texas star after a sweet touchdown catch.

Fearless men like Tim Patrick aren't the whole answer, but they're going to be a big part of it.

Woody Paige: Broncos are back in the saddle after dominating the Cowboys

The Broncos’ recently-maligned defense treated the Dallas backfield of Dak Prescott and Ezekiel Elliott with disdain and derision, limiting the running back to only 51 yards and the returning quarterback to barely 100 yards for a majority of the game.