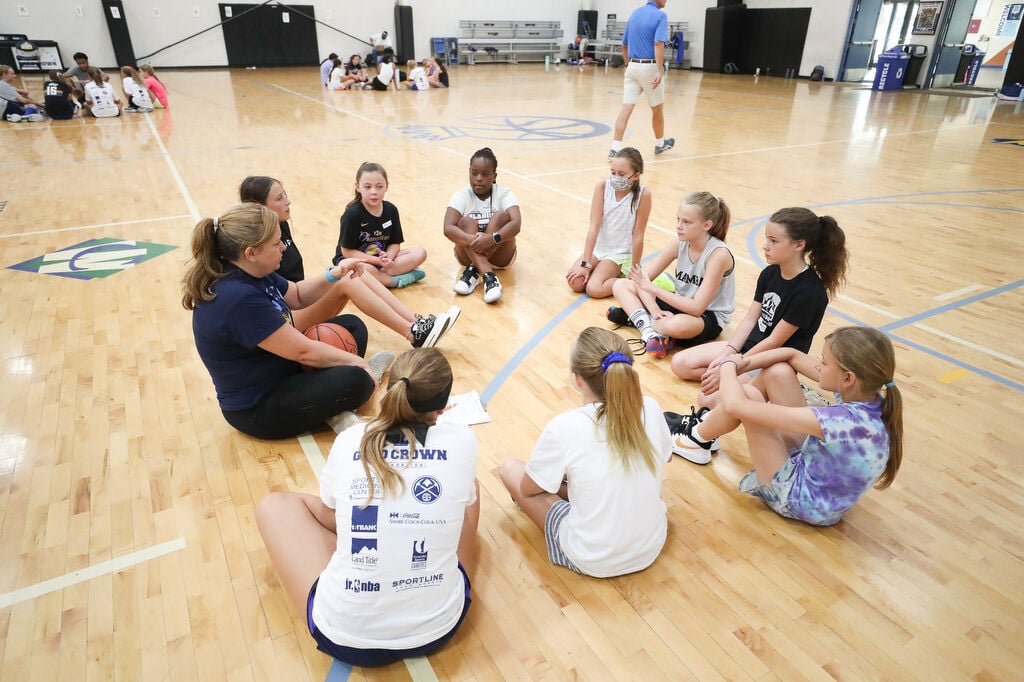 At Gold Crown gymnasium in Lakewood, campers hold a conversation with longtime coach and former camper Alex Rossi as part of the "Health Huddle." 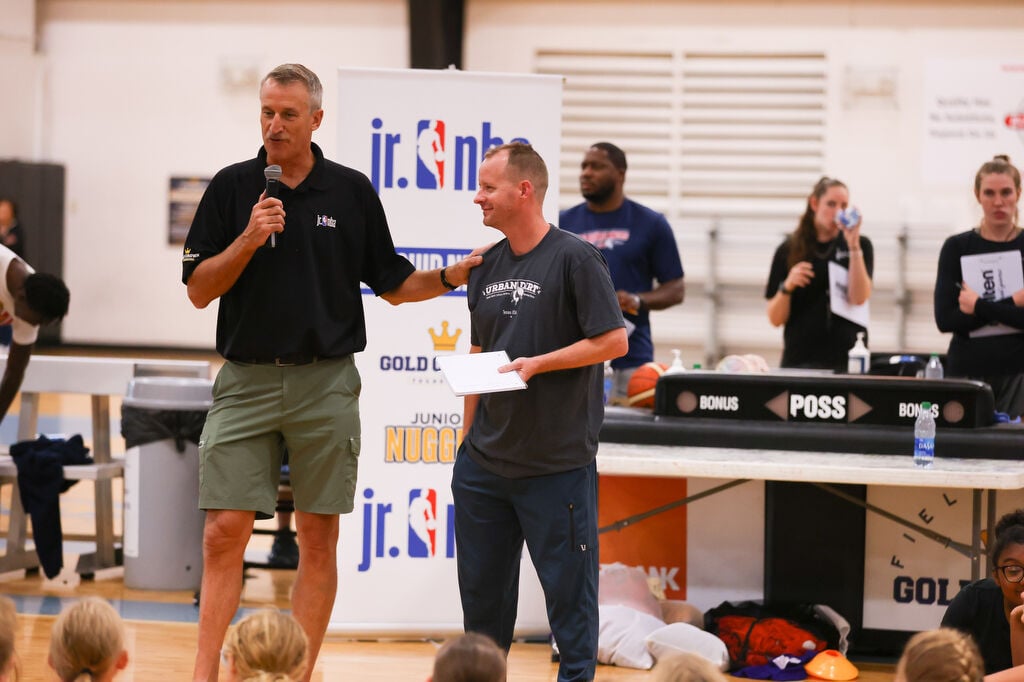 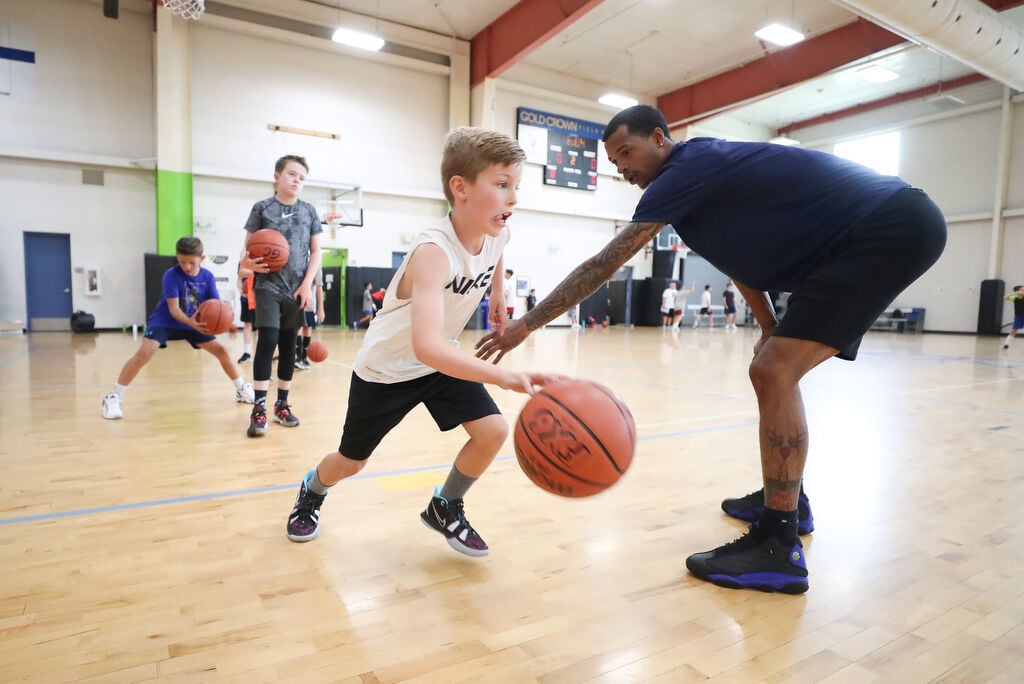 At Gold Crown gymnasium in Lakewood, campers hold a conversation with longtime coach and former camper Alex Rossi as part of the "Health Huddle."

LAKEWOOD — “We’re not trying to change the world,” Bill Hanzlik says, leaning forward in a Nuggets polo. I don’t believe him. With a subtle tweak at his Gold Crown gym, they just might.

The headquarters for the Gold Crown Foundation is the field house off Alameda on Denver’s west edge. It’s eight basketball courts, STEM programs, classrooms, the works. For kids, it’s an oasis. Hanzlik began the nonprofit in 1986 — during his NBA career, before he coached the Nuggets — to get his three daughters into a hoops camp. Couldn’t find one for girls, he says, “And that’s crazy!”

“I’m a huge fan,” says Scott Cypers, the director of stress and anxiety at the Johnson Depression Center on the CU-Anschutz Medical Campus.

Same, and here’s the gist: a conversation. That’s it. At its core, that’s the Health Huddle Timeout — a conversation with kids, most of them fourth- to ninth-graders, an age where "Shirts vs. Skins" still gets a bunch of giggles and aspiring Jamal Murrays flex their toothpick arms. It’s also an age hit hard by the COVID-19 pandemic — not in terms of their physical health, as reports say COVID poses a “vanishingly tiny threat” to kids, but their mental health. The latter has collapsed.

“Some kids have been able to thrive,” says Cypers. “Others, it's kicking their butt.”

“I think sport is a real saving grace for kids right now,” the expert adds.

Gold Crown is hitting back with the Health Huddle. Funny thing is, the good people at Gold Crown came up with the Health Huddle idea in the before times — September 2019 — when masks and quarantines and school closures and locked playgrounds and a “pediatric mental health state of emergency” were a bad dream. God works in mysterious ways, Hanzlik says, and now the 17,000 kids (and the coaches!) who roll through Gold Crown are better prepared when a bad day rolls around. The Health Huddle aims to keep it at one bad day, nothing more.

I came through on the day Phase 1 of the Health Huddle Timeout debuted. Eight basketball campers and one coach sat in a circle. Simple enough. From there, the coach would start and host a conversation. They’d present basic, innocuous questions that had nothing to do with basketball, everything to do with kids — a mental timeout lasting 10 minutes during a 3-hour hoops camp.

“What are you excited about with school coming up?”

“What’s something fun you did this summer?”

“What did you learn from the COVID year?”

And the key question, the foundation of the Health Huddle as a whole: “How are you doing?”

As Tawny Vessey, a director at Gold Crown Foundation, says: “How often do people ask, ‘How are you doing?’ and actually mean it?”

Coaches and volunteers are taught about the mission of the Health Huddle. Shoot, one of my columns on the importance of kids’ mental health was used as reference. One longtime coach, Alex Rossi, who’s spent 30 years from camper to coach at Gold Crown, says: “We’re not go-go-go. We’re focused on here (points to the court), but also up here (to her head).”

Life’s not getting easier for kids, you know. Five times more kids died of suicide than COVID in the U.K. — when reports say kids under 18 represent only .05 percent of COVID deaths. All that knowledge, all that data, yet kids are still carrying a burden that should never be placed on them.

“It’s been heartbreaking to see what some kids are going through right now,” Hanzlik says.

Thank goodness for Gold Crown and folks like them. Their programs saw a huge uptick in participation in the past year. The golf camp saw a 100 percent increase in kids. A volleyball camp sold out with 200 kids per session. Now comes the Health Huddle, and Gold Crown has aligned with CU-Anschutz Med Center and Children’s Hospital Colorado for expert guidance.

“That relationship between kid and coach can be really powerful and transformational. My JV basketball coach was a foundational element of my life,” says Cypers, the expert. “Giving coaches and parents more tools through sport is just a wonderful idea. Make it safe and OK to talk about these things in the context of sport. You destigmatize the idea it’s not OK to talk.”

Middle schools in Douglas County have signed up for the tool kit. Same for some in JeffCo.

As hoops camp comes to an end, teams are broken into NCAA (“Duke,” “Gonzaga”) and NBA (“Nuggets,” “Lakers”) brackets. One kid launches an air ball. Another high-fives him.

The Health Huddle’s not trying to change the world. Changing a kid’s day might just do that.