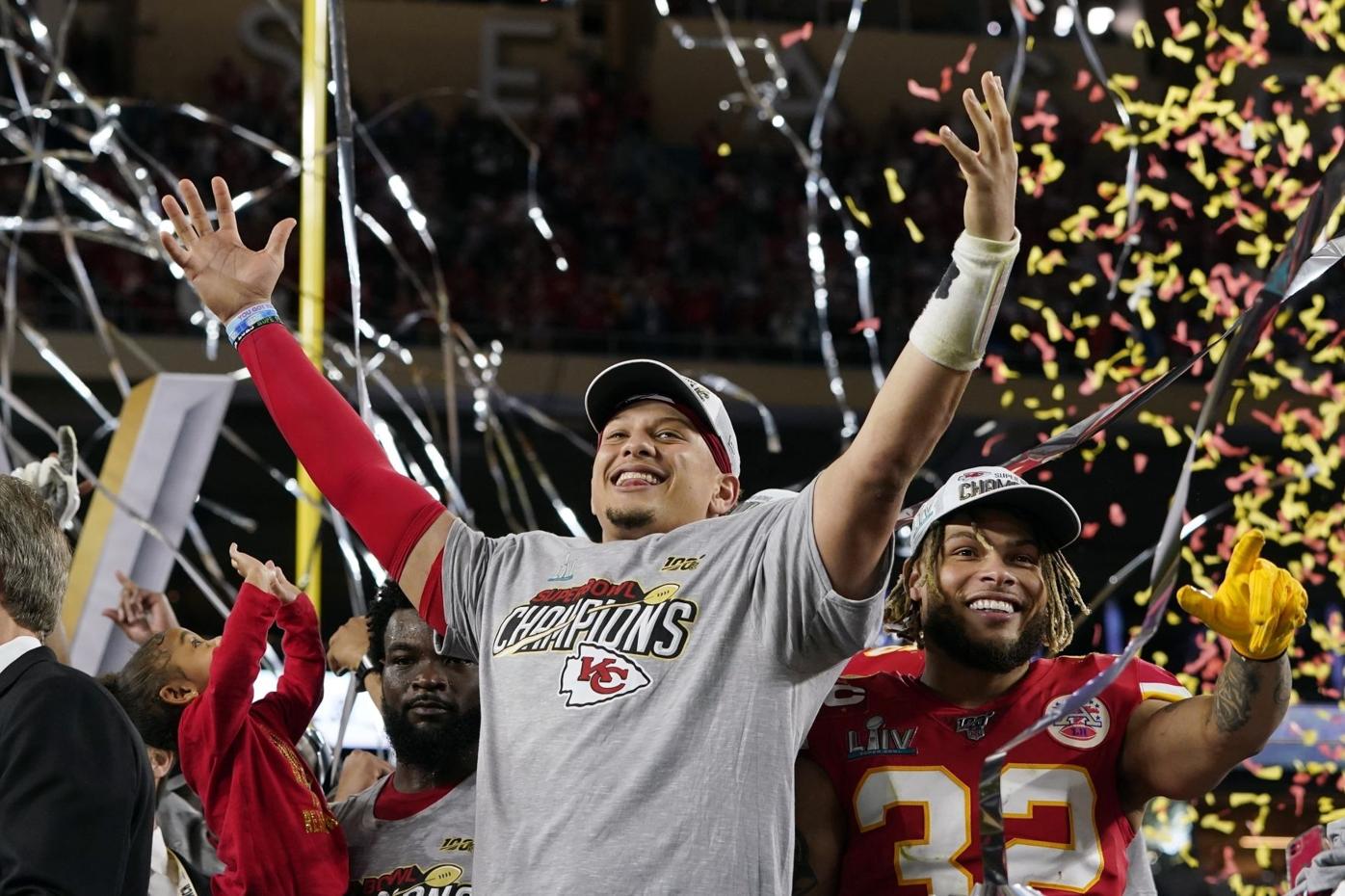 Kansas City quarterback Patrick Mahomes, left, celebrates Feb. 2 after defeating the San Francisco 49ers in NFL Super Bowl 54 at Miami Gardens, Fla. The champs roll into Denver on Oct. 25, while the Broncos travel to face the Chiefs on Dec. 6 in the Sunday Night Football game. 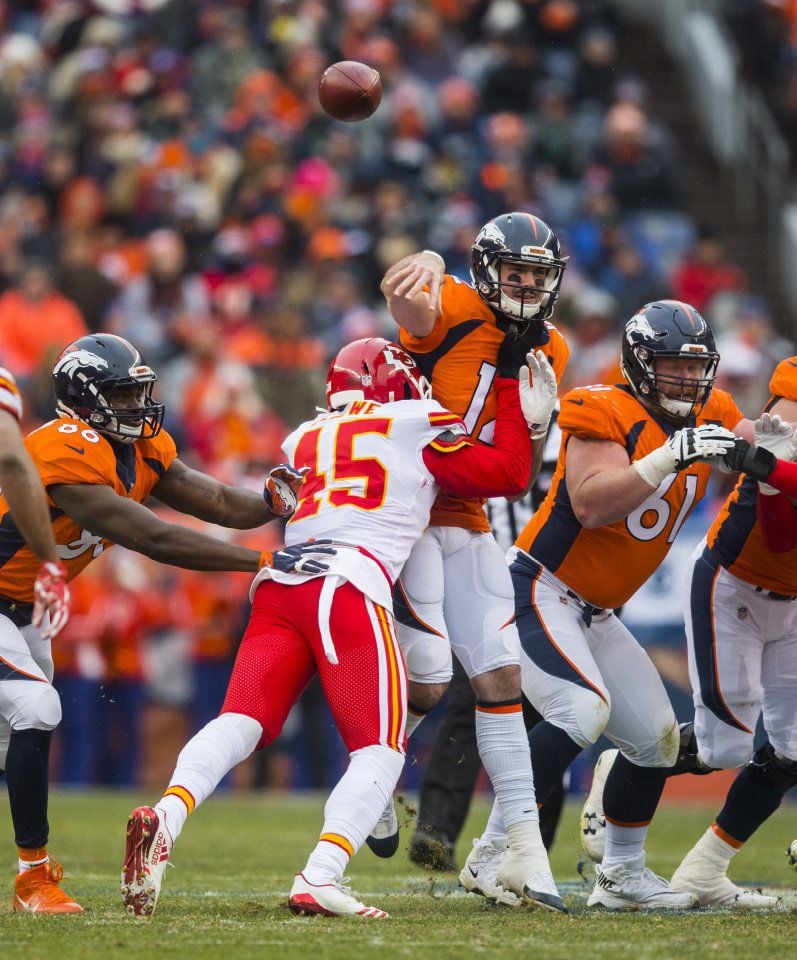 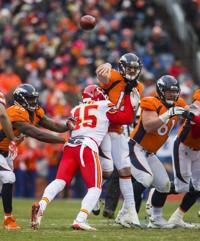 Kansas City quarterback Patrick Mahomes, left, celebrates Feb. 2 after defeating the San Francisco 49ers in NFL Super Bowl 54 at Miami Gardens, Fla. The champs roll into Denver on Oct. 25, while the Broncos travel to face the Chiefs on Dec. 6 in the Sunday Night Football game.

DENVER — Patrick Mahomes’ first game in the NFL was against the Broncos. The opposing coach was Vance Joseph, the quarterback Paxton Lynch.... and the Broncos almost won.

How has NFL Films not covered this?

It’s time. It’s way past time. Time the Broncos ended their long AFC West nightmare — a losing streak to the Chiefs that spans 11 games, 1,431 days, 12 Broncos quarterbacks, three Broncos coaches, six double-digit blowouts by the Chiefs (four by 20-plus), two close calls decided by only three points, three presidents. It’s been so long since the Broncos beat the Chiefs, the current president probably can’t remember it.

“I’m pretty sure they (the Chiefs) are not sitting there saying, ‘We’re 11-0 or 10-0 against Justin Simmons, 6-0 against (Bradley) Chubb,” said Broncos quarterback Teddy Bridgewater.

With all due respect, good sir, I’m pretty sure they are. You think the Chiefs don’t know the score? Of course they know the score. With a win at Arrowhead Stadium on Sunday Night Football, the Chiefs would secure the longest win streak in a rivalry that goes back six decades. (Kansas City also won 11 straight from 1964-69.) If the rumor is true the Broncos will have a new owner next year, I am left to wonder why the Chiefs would give up their stake.

“Obviously I haven’t beaten them since I’ve been here,” Justin Simmons said the other day.

Only the Raiders own a longer win streak against the Broncos — 14 straight in the 1960s and 70s.

For the record, Bridgewater was off by a couple losses — but the fact he was close suggests the Broncos know the score, too. Simmons is actually 0-9 vs. the Chiefs. Chubb is 0-4. Other Denver long-timers include Garett Bolles (0-8) and Brandon McManus (2-11 — thanks, Peyton). Kansas City’s dominance must tickle. Shoot, I’m ticked off after losing a single putting match for a beer.

“From a team standpoint I guess the right word would be ‘disappointing,’” Simmons said.

For different reasons, the list of Colorado villains include but are not limited to Todd Bertuzzi, the late Kobe Bryant, Kris Draper, Tim Brown, Michael Dean Perry, smart politics and Dick Monfort. I’ve never gotten the sense the good people of Colorado hate Patrick Mahomes or anything like that — not like Colorado hates Handsome Tom, or like Kansas City hated John Elway and Peyton Manning. Maybe that changes when the Broncos finally beat him. Can’t hate what you can’t beat. That's just sour grapes.

Mahomes is 7-0 against the Broncos. Only the Broncos, Browns and Jaguars have faced Mahomes in multiple games and remain winless. He’s averaged 260 passing yards vs. Denver, with 10 touchdowns and three interceptions (two by Simmons, one by Darian Stewart). His quarterback rating against the Broncos is a smidge over 100 (102.4). He’s been sacked 12 times, and Mahomes has scored one rushing touchdown. He’s fumbled once but didn’t lose the ball. I once wrote the Chiefs should not play Mahomes against the Broncos, because I thought he would get injured. Mahomes then dislocated a kneecap. The Chiefs still won.

Mahomes is having his worst season as an NFL quaterback. In other news, Tiger Woods once shot 80 in the U.S. Open.

You can count him out this season, but I refuse. When his type fights a bear, you help the bear.

Since Paxton Lynch is a target around here, it must be noted Lynch was the quarterback when the Broncos played their closest game against Mahomes. On New Year’s Eve, 2017, at Empower Field at Mile High, the Broncos lost to Mahomes' Chiefs by only three points. Three!

OK, so the Chiefs had already clinched the AFC West and rested a bunch of starters. But still.

By the way, Lynch is back in Denver, so that’s another option for Sunday night. He was playing for the Saskatchewan Rough Riders. He left the Rough Riders after Canada channeled its inner China and banned unvaccinated people from traveling on airplanes, according to a report.

The Broncos have won a Super Bowl more recently than they’ve beaten the Chiefs. The last time the Broncos beat the Chiefs, reigning MVP Nikola Jokic had not yet played an NBA game. Been a while.

“Some things you just don’t talk about,” Bridgewater said of the streak.

It’s time. But it won’t be this time.

ENGLEWOOD — Surprisingly, the Broncos' offense got off to a fast start against the Chargers on Sunday.