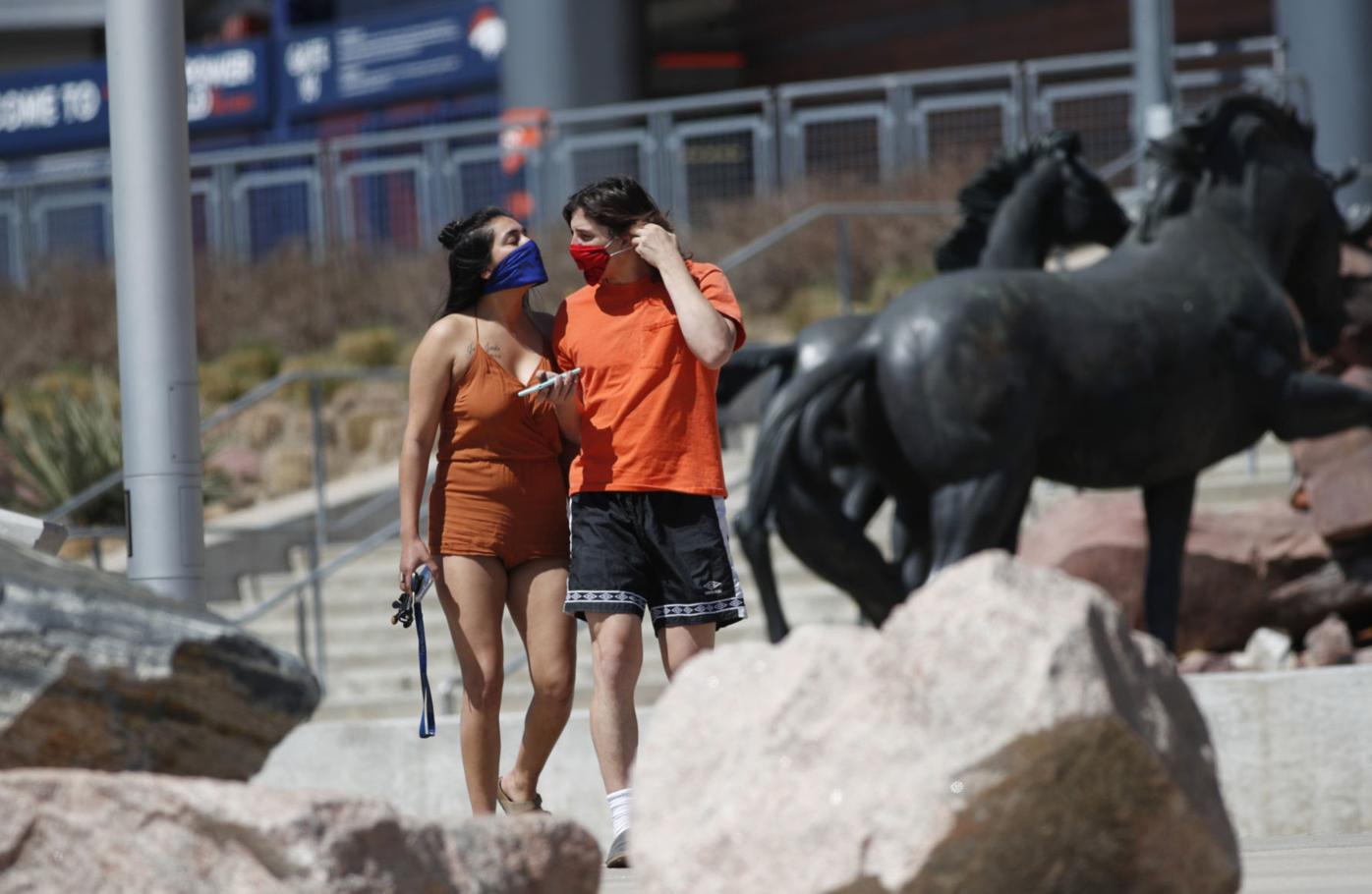 Wearing face masks, a young couple jokes around after taking photos April 6, 2020, outside Empower Field at Mile High in Denver. 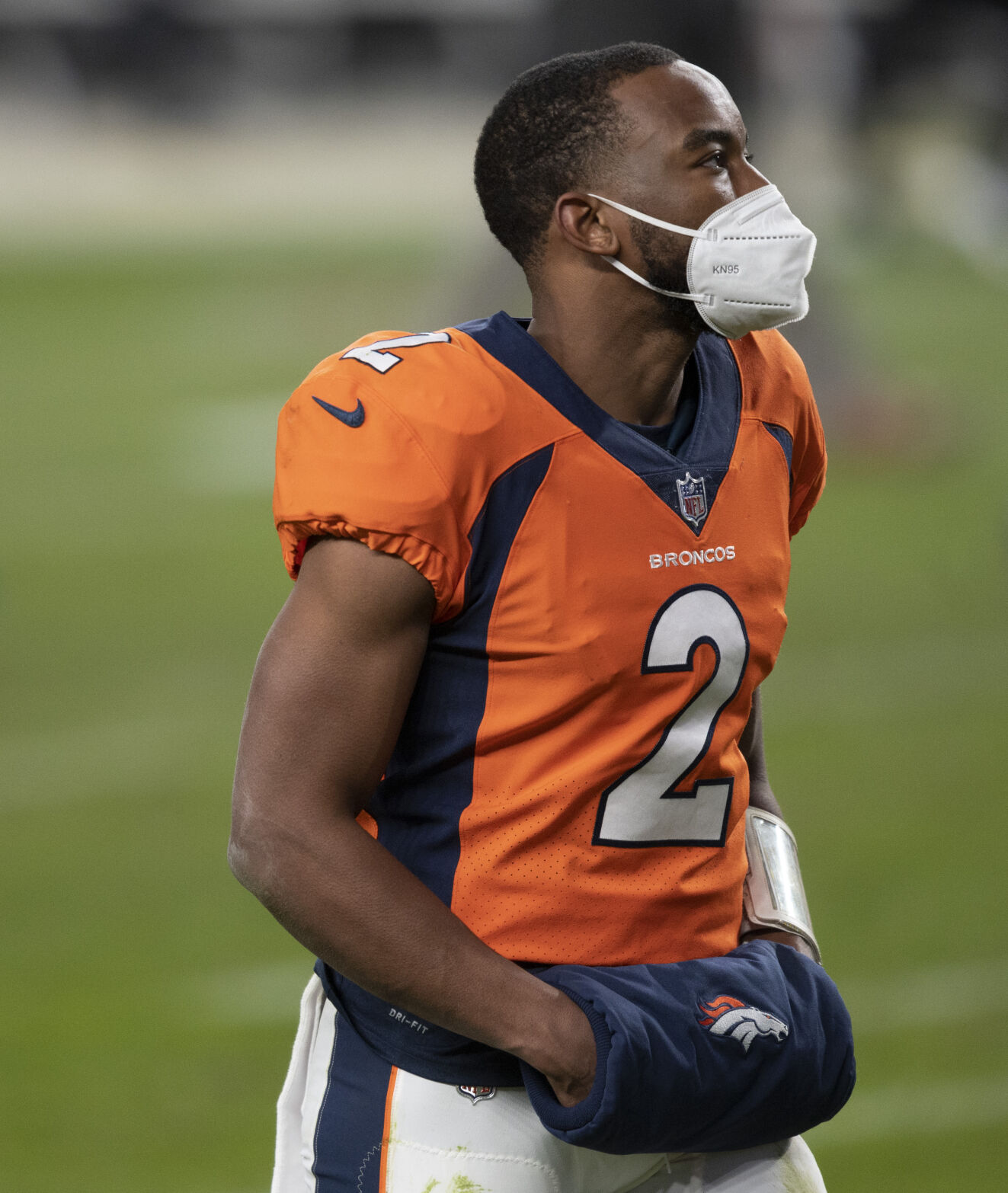 Wearing face masks, a young couple jokes around after taking photos April 6, 2020, outside Empower Field at Mile High in Denver.

DENVER — With a nudge from Colorado's public health "experts," the Broncos are requiring masks at Sunday's Chargers game at Mile High.

This is like the Broncos telling all the other NFL teams what plays to call on their opening drives.

The Broncos went 24 games without scoring a touchdown on an opening drive. The politicos in charge of Colorado public health are 19 months into the COVID-19 pandemic, and all their rules and shaming and restrictions and mandates have resulted in... the same awful outcomes.

In almost every way, we're worse off. I’m not talking worse off only with COVID-19, either. I’m talking worse off with almost everything — extreme learning loss in schools, a pediatric “mental health state of emergency,” drug overdoses, distrust in previously trusted institutions, you name it. These are often categorized as results of the pandemic, but they’re not. They’re due to a pandemic response that won't admit its errors.

Now they're running back a failed playbook.

Paul Klee: Broncos GM George Paton growing his credibility here — except where it matters most, at quarterback

We’re not here today because the Colorado Department of Public Health and its county tentacles failed once in a once-in-a-lifetime pandemic. We’re here today because the same playbook used in loss after loss is now in play again, and about the only Coloradan of influence taking exception is Gov. Jared Polis. A coach who takes "L" after "L" would not be allowed near the game plan anymore, and sports should not have more accountability than real life.

The “science” crowd can flood my inbox all they want. Tell my bosses I should be cleaning golf carts. But you’re wrong. The facts prove you’re wrong. Time to admit the restrictions and rules end only with unfortunate results so we can move forward.

I’m trying to think of a job where you can fail over and over again and not only keep your job, but you can be awarded even more power and influence in that job. That’s public health right now. It’s not Vic Fangio and Pat Shurmur and the rest of the Broncos coaches, who are squarely on the hot seat. The Broncos must win Sunday or a fourth season for Fangio gets dicey.

Klee's Scorecard (and prediction): The Denver "Unders" score another gambling win in Broncos-Chargers

On the list of reasons sports are better than real life, wins and losses are a unanimous No. 1. Outcomes matter. Right there on the agate page is evidence why a coach should stick around or be fired. Cut and dry. If an NFL head coach showed the results of Colorado’s public health officials, he would be fired. Cut and dry.

Explain to me how this report card 19 months into a pandemic commands more influence:

-Colorado neared its worst COVID peak after all of those business and school restrictions, after the endless fear-mongering, after a successful vaccination campaign, after all of it

-Colorado now has fewer hospital beds than a year ago, which completely blows my mind

Sorry, but when you're invariably wrong — with only bad results to show for it — you don’t get to tell people how to live anymore. Credibility used to matter. It’s time for it to matter again.

Media are a problem here. They carry on about speaking truth to power, but when it comes to the real power of the moment, public health bureaucrats, they regurgitate without question. So here’s a question: Where are the positive outcomes from public health's influence? That's a real question. How has public health improved life in Colorado? No one can answer that for me, but it usually goes like this: Well, it could have been a whole lot worse.

Really? Because if we’re talking about states, Florida lifted COVID restrictions seven months ago, and last week Florida reported the lowest COVID cases per capita in the entire country. If we’re talking about countries, Sweden famously avoided the restrictions that locked down the West. Sweden now has the lowest COVID rate in Western Europe. Neither had the collateral damage of Colorado, where on Sunday you must wear masks indoors at Mile High — except in box suites, since COVID doesn't do Club Level.

Guess it's more of a South Stands kind of virus.

Gov. Polis was right, by the way, when he pointed to New Mexico’s longstanding mask mandate and New Mexico’s sky-high COVID rate in explaining why he won’t go statewide masks.

Good on you, sir. Appreciate a good data-driven approach, and ignoring party lines is a first step.

We’re a humble epiphany away from the “trust the science” crowd admitting the world would have been better off, all things included, if not a single school closed, not a single business shuttered. I’m not talking about the COVID numbers. I’m talking about all the numbers — all the drug overdoses, business closures, inequalities, mental health tragedies, livelihoods lost through mandates, all the damage from all the harmful restrictions that, 19 months later, didn't do a damn good thing.

Once again, Colorado is calling the same fullback dive after it got stuffed on first, second and third down. Welp, better run it up the middle on fourth! Wear your mask!

Woody Paige: Former Bronco and member of the "No-Fly-Zone," Chris Harris Jr. returns to town as member of Chargers

Don’t let it be forgot that once there was a spot, for one brief shining time that was known as the No-Fly Zone. Wot!