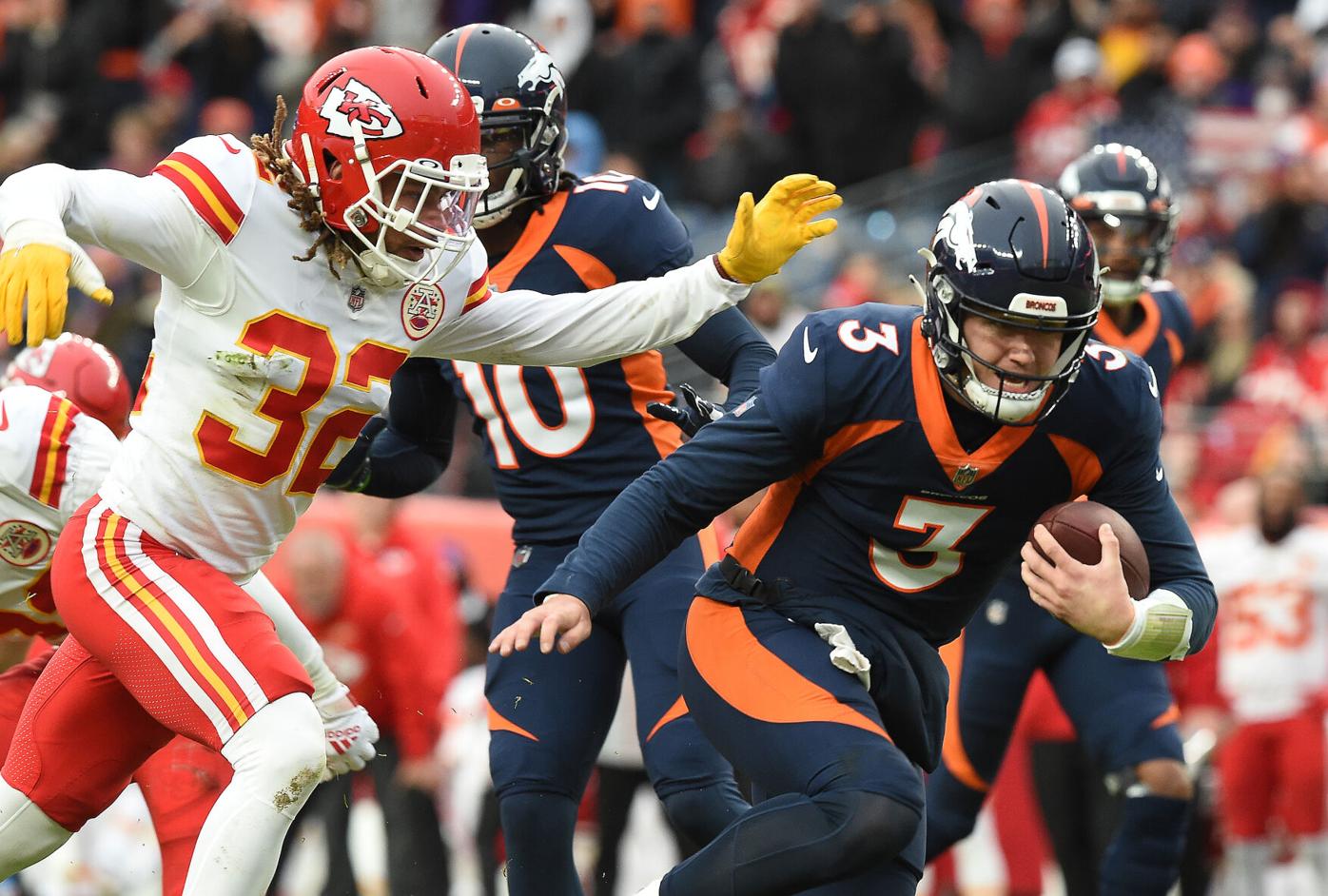 Broncos quarterback Drew Lock puts it in gear and heads for his second rushing touchdown of the game against the Chiefs on Saturday, Jan. 8, 2022 at Empower Field at Mile High. (Photo by Jerilee Bennett, The Gazette) 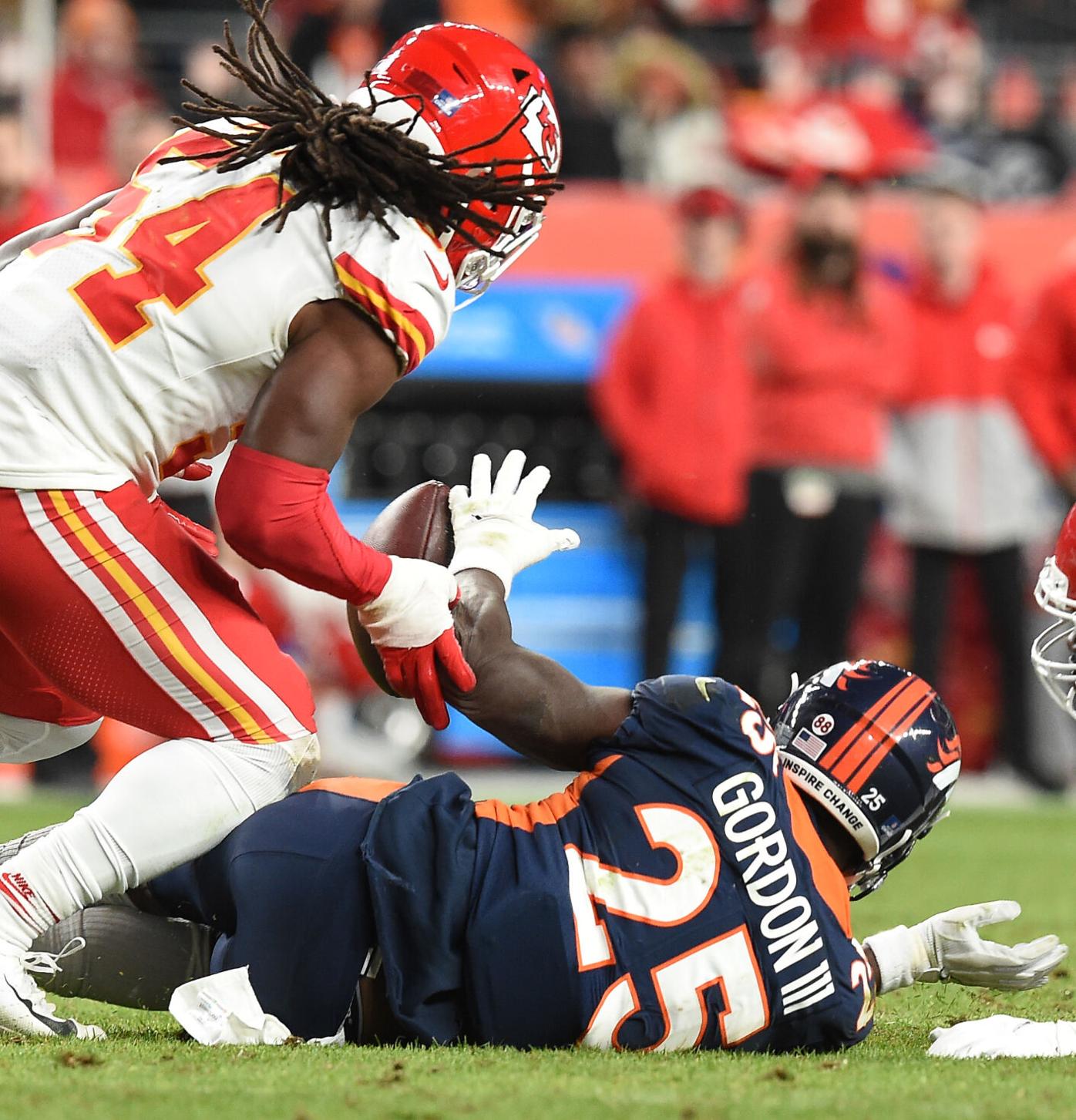 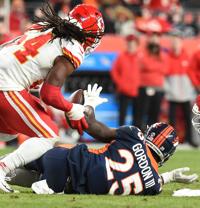 Broncos running back Melvin Gordon III fumbles the ball and Chiefs linebacker Nick Bolton recovered it and ran it to the end zone for a Chiefs touchdown in a game at Empower Field at Mile High on Saturday, Jan. 8, 2022. The Broncos were moving the ball down the field and possibly The Broncos lost to the Chiefs 28-24. (Photo by Jerilee Bennett, The Gazette)

Broncos quarterback Drew Lock puts it in gear and heads for his second rushing touchdown of the game against the Chiefs on Saturday, Jan. 8, 2022 at Empower Field at Mile High. (Photo by Jerilee Bennett, The Gazette)

Broncos running back Melvin Gordon III fumbles the ball and Chiefs linebacker Nick Bolton recovered it and ran it to the end zone for a Chiefs touchdown in a game at Empower Field at Mile High on Saturday, Jan. 8, 2022. The Broncos were moving the ball down the field and possibly The Broncos lost to the Chiefs 28-24. (Photo by Jerilee Bennett, The Gazette)

DENVER — Don’t get any crazy ideas.

Don’t think for a second the Broncos actually keeping it close in a 28-24 loss to the Chiefs on Saturday is a sign of progress. Don’t consider a narrow loss to Patrick Mahomes a moral victory.

If George Paton elects to keep Vic Fangio as coach and/or fails to make a major move at quarterback in the offseason, the GM makes it official: his vision for the Broncos is the Vikings.

Just be good enough to not get fired.

Woody Paige: Something's got to give to return Broncos to relevancy

While the Broncos played their tails off in a season finale full of pride, hard enough a 12-game losing streak to the Chiefs was in doubt, one Fangio decision proved why running this back would be a worse follow-up than “Caddyshack 2.”

Vic kicked. Still can’t believe it, but he kicked. The Broncos were trailing by a touchdown when Fangio ordered a field goal from the 9-yard line. There was only 4:41 left in the final game of a lost season. No playoff implications, a seven-month offseason coming next. And he kicked.

The nonsensical tendencies of this era of Broncos football has actually been the fun part. They blow through timeouts and challenges like they’re yellow lights. They lose late leads to backup quarterbacks like Gardner Minshew and Mitchell Trubisky. But kicking a field goal in a meaningless finale, trailing by a touchdown, with Patrick Mahomes set to take the next snap?

That's a 1 seed in the nonsense power rankings.

Or maybe Fangio's decision was lobbying to keep his job. These Broncos love to play it safe.

ESPN.com’s Jeff Legwold asked Fangio about his future with the team, and Fangio said: “I’ll be good, Leggy. Don’t worry about me.”

I’m more worried the Broncos are comfortable with just OK, good enough to not get fired.

The way this season ended was so Broncos it hurts. Melvin Gordon fumbled at a critical time and the Chiefs returned the fumble 86 yards for a touchdown. It was the kind of play you’d see in a blooper reel from the Lions or the old Browns, complete with blooper music. It was just last week Gordon described the Broncos as a “Super Bowl” roster. Then Vic kicked. And it was just a month ago, after a loss to the Chiefs, Fangio said, “Field goals weren’t going to beat” the Chiefs. And he called for a field goal to try to beat the Chiefs.

I don’t know how much longer Broncos Country can take this stuff. That’s 13 straight Ls to the Chiefs. That’s five straight losing seasons, three under Fangio. That’s 13,000 no-shows for a season finale at Empower Field at Mile High, the number that would get Pat Bowlen’s attention. It used to be the Chiefs were the football version of a “Final Destination” movie. You didn’t know how it would end, but you knew it would be a disaster. Now it’s the Broncos in that role.

“We’re not quite there yet, but we’re close,” Fangio said.

I expect Paton is going to keep Fangio. That’s just my gut feeling, and it would jibe with Paton’s M.O. so far with the Broncos. He likes safe. He drafts a cornerback who's going to be really good, Patrick Surtain II, over a quarterback who might be really good, Mac Jones. Paton had a long run in Minnesota where the Vikings made the playoffs six times — with six quarterbacks. And that was good enough in Minnesota to have a long run. Is it here, though?

Gifted another favorable last-place schedule, the Broncos should start next season with a new coach and a new quarterback. They’re 19-30 over three seasons of Fangio and Lock, who would benefit from a fresh start elsewhere too.

The Broncos went 1-6 against AFC playoff teams as of Saturday. That’s not close. That’s far.

The Broncos won a Super Bowl more recently than they’ve beaten the Chiefs. Again, not close.

Shoot, if I didn’t know any better, I might think Andy Reid let the Broncos hang around Saturday simply because it would encourage the Broncos to retain Fangio-Lock for another run in 2022.

The Broncos went 1-5 against the AFC West. You think Reid and the rest want changes here?

Fangio was correct, by the way, in explaining the gap between the Broncos and their rivals: “Those other three teams have top-shelf quarterbacks, which is obvious to everybody.”

To be straight up with you, I believe Fangio is a good coach. His defense got better after the Broncos traded Von Miller, which says a lot about 32-year-old Von Miller too. I also think he stinks at choosing quarterbacks, so he fits right in with the Broncos. “Lockwater” was a dud, a fact that was obvious in training camp. And Fangio was in the room for the Lock draft pick, and signed off on the Teddy Bridewater trade.

God bless Teddy Bridgewater, but the Broncos would have been better off starting Lock all season, at least until he got hurt again.

“I’d like to think there’s a future with me in it, but that’s not my choice,” Lock said Saturday.

Please, don’t get any crazy ideas.