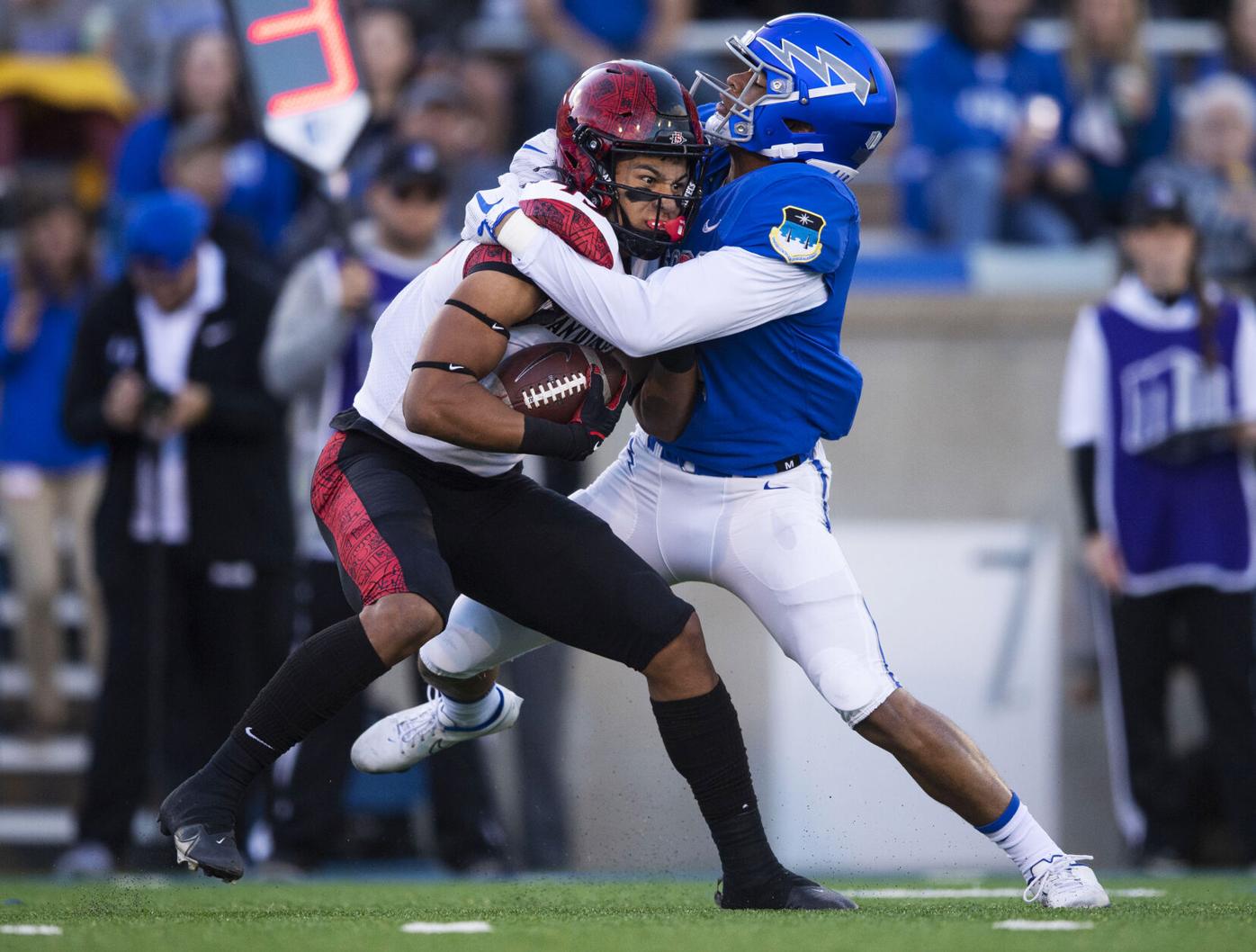 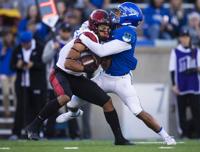 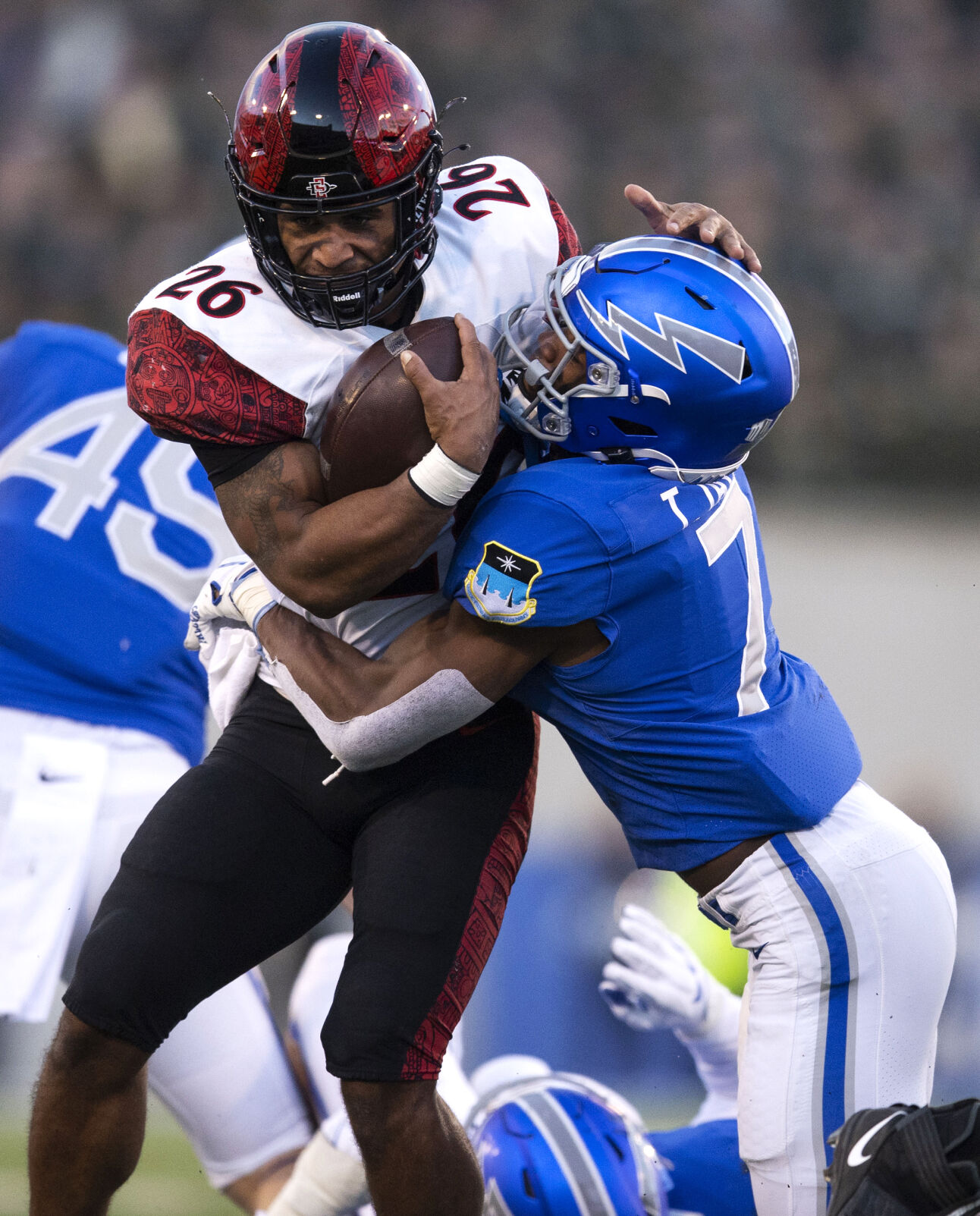 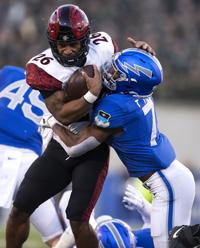 AIR FORCE ACADEMY — Nights like this, you wonder if this is the ceiling for Air Force football.

Not that there’s anything wrong with that.

It is what it is.

"Mass times acceleration,” Falcons coach Troy Calhoun said after, breaking into a physics equation I definitely got wrong back in the day. What I think he was saying — what I hope he was saying — is that the sheer girth and speed of the Aztecs were too much for the Falcons.

That’s what I saw, anyway.

I saw a 20-0 San Diego State lead before 23,887 barely finished their first beer and wondered why they didn't bring a warmer jacket Saturday night. I saw a former Big Ten coach in Brady Hoke flex his muscles on the offensive and defensive lines, as a former Big Ten coach is genetically obligated to do. I saw what Calhoun saw, but without the fancy physics equations.

“Just look at their size, their movement. I don’t think they’ve lost too many (games) this year. There’s a reason why,” Calhoun said. “At the line of scrimmage, those are guys that are hard to block.”

San Diego State hasn’t lost this year, by the way. They’re 7-0 with their toughest remaining games all at home — Fresno State, Nevada, Boise State. If they’re 12-0 in December, don’t be shocked, and if San Diego State is the best team that Air Force plays this year, I won’t be.

So are the Falcons, but they’re not as good as the Aztecs. Sometimes sports go that way. I could rip Calhoun for the odd decision to punt on fourth down with under 2 minutes left, gambling to get a stop (or a blocked punt, as Calhoun said was the hope) and the ball back.

"If it doesn't work, you're wrong as the head coach," Calhoun said.

But Air Force didn’t give this one away so much as San Diego State flat-out took it away. Bummer, too, because Air Force would have snuck through the backdoor of the AP Top 25 with a win. That’s what happens when you’re “ranked” 30th and the opponent is 22nd. But it turns out San Diego State is ranked 22nd because the Aztecs are better than the Falcons.

Clearly better, and sometimes it is what it is.

Oh, the Falcons did some things you don’t normally see the Falcons do — like drop touchdown passes. Micah Davis is an electric sophomore, and in a couple years, I'm betting he goes down as one of the Air Force greats. But Davis dropped a sure-thing touchdown pass in the first half, and that drop changed the game. The incompletion would have gone for 86 yards.

Stuff happens. But when stuff happens against a team like San Diego State, you come to regret it.

Credit the Aztecs in this one, because this one was more about the Aztecs winning a big game than the Falcons losing a big game. And credit their punter-kicker. He’s a guy named Matt Araiza, and I mean this wholeheartedly: The Denver Broncos should use a draft pick on Matt Araiza. Araiza did all this in a single game: 81-yard punt, 67-yard punt, 61-yard punt, field goal of 51 yards. He not only has the heavy leg, he opens up a scholarship. Get this: In the third quarter, Araiza set a national record for most punts of at least 60 yards in a season. He has 14. He still has five games left in the season.

The Broncos should draft him. They punt a lot.

Air Force starting quarterback Haaziq Daniels left with an injury, and so did Micah Davis, which are the kinds of things that happen when you play a team that's bigger and stronger than your team. Mass times acceleration, all that.

“Wish you could go back and change it,” Bryan said, “but it is what it is.”

The Falcons hosted a legit Top 25 team and got knocked around by a bunch of big bodies and bad dudes, and while I’d prefer to find a deeper meaning in the defeat, that’s what this one was.

“Take that initial physics class here: When guys are bigger, there’s a little more burst, a little more acceleration. Mass times acceleration,” Calhoun said. “I know I’ve said it a few times, but we’ve got to tip our cap to them, too.”

It is what it is.

A dropped touchdown, an interception, a fumble, an untimely penalty… where to begin.