As cybersecurity grows in importance, the workforce needs experts to keep the digital world safe. That training starts with education in high school and college.

Air Force Academy Cadet 2nd Class Everett Montano examines portions of the "Cyber City" model Tuesday, April 5, 2016 in Fairchild Hall at the Academy. The model is part of the Academy's cyber training range and Eaton is on the USAFA Cyber Competition Team. The model helps cadets learn how to protect municipal infrastructure, such as the power grid and airport, from cyber attacks. Photo by Mark Reis, The Gazette 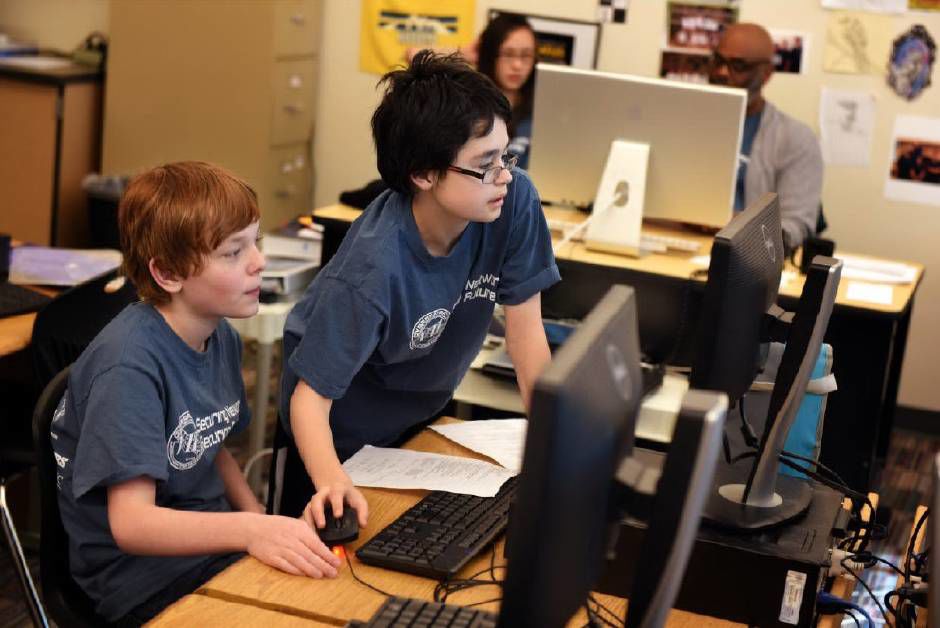 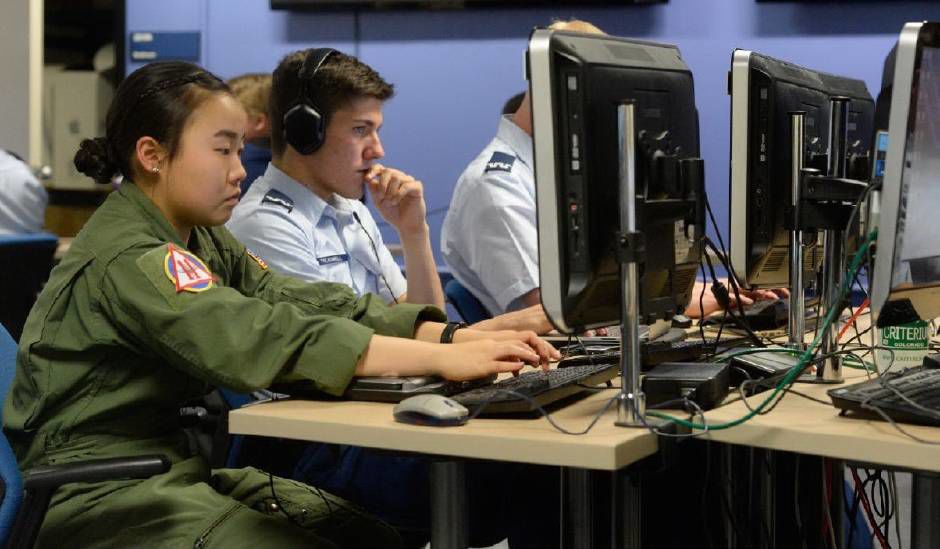 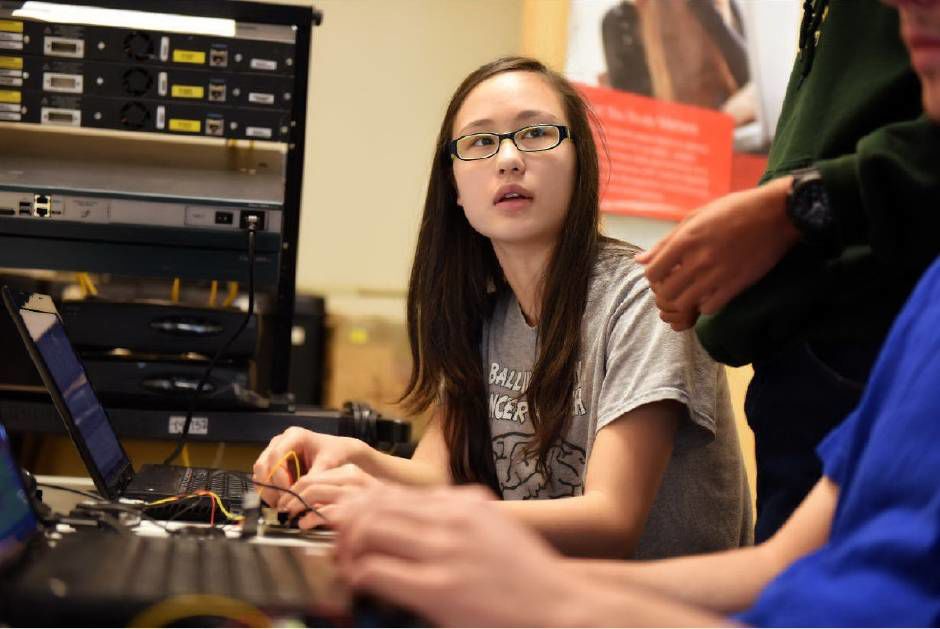 Tenth-grader Kiana Harkema, 14, troubleshoots a Wi-Fi connection with a microcontroller board during a computer forensics class Jan. 23 at Falcon High School in District 49. “We can get so used to buying these types of things,” said Harkema, while developing a secure, remote-controlled camera system with two classmates. “With this, we get the opportunity to build our own project, be the inventors that our generation can be.”

An unending war happening in the nebulous realm of cyberspace needs more troops to fight the bad guys and protect the innocent.

With high-profile security attacks on big-box stores, hospitals and government agencies, “All of a sudden, people are finding out there’s a cyberwar going on,” said Edward Chow, a University of Colorado at Colorado Springs computer science professor.

But there aren’t enough cybersecurity workers to stop hackers from invading and stealing information. Or enough students considering the field as a profession.

“There’s a tremendous demand for these skills,” said Martin Carlisle, director of the Air Force Academy’s Center for Cyberspace Research in Colorado Springs. “We are seeing corporations as well as the government constantly being attacked in the cyber domain, and we just aren’t producing enough professionals who can handle the threat.”

A record 79 percent of American businesses reported some sort of cybersecurity incident in 2014.

And the 238,158 job postings for cybersecurity positions represented a 91 percent increase from 2010, according to a Burning Glass Technologies report.

Last year, aerospace and defense contractor Raytheon and the National Cyber Security Alliance commissioned a survey to assess cybersecurity career interest and preparedness. Released in October, the survey showed about two-thirds of nearly 3,900 millennials in 12 countries who responded were unaware they could pursue a career in cybersecurity.

And 58 percent said they were not taught in classrooms about ways to stay safe online or were unsure they learned that.

“We have these crazy ideas that are crazy enough to work. But nobody wants to give us a chance.”
- Andrew Dubiel, Vista Ridge

The combination of not knowing about the field and not being taught cybersecurity principles has contributed to the industry shortage.

Todd Probert, vice president for mission support and modernization at Raytheon Intelligence, Information and Services, said he wasn’t surprised by the survey results.

“We’re focused on getting the message out there that we need more folks,” he said. “With the proliferation of cellphones, our toasters talking to our refrigerators and other technology, if we don’t have that workforce, we will be at a disadvantage globally.”

A generation gap is causing some of the problems.

Chow said the majority of the 150 attendees at a recent meeting of the local Information Systems Security Association were white-haired, like himself.

“Most are older and going to retire soon, and who is going to take their place?” he asked. “How many workers can we produce?”

But students often aren’t taken seriously by industry types, said Andrew Dubiel, a Vista Ridge High School graduate who is now a senior at the University of Mary in Bismarck, N.D.

“There’s a disconnect between the generations,” he said. “The older generations running these companies see students as not knowing what’s going on.”

Not true, said Dubiel, who formed a computer club that has students working on such projects as figuring out how to text a computer to shut down or lock itself.

“We have these crazy ideas that are crazy enough to work. But nobody wants to give us a chance.”

Dubiel will leave his mark on the school, though.

He and two other students pushed for and helped develop curriculum for a new cybersecurity bachelor’s degree program that will begin in the fall. They’re also working to create a master’s program with an emphasis in cybersecurity.

“I noticed that a lot of the courses were teaching stuff that was outdated,” Dubiel said. “When students are given a chance, we can prove we can hang with the big guys.”

Indeed, students at UCCS are helping with research projects, such as developing the next generation of digital face recognition and investigating the trend of holding computers captive for ransom.

At the Air Force Academy, a cyber city similar to a model train track was recently set up. The entire city built to scale helps cadets identify vulnerabilities in the power grid, rail transportation, the airport and other municipal systems.

“One of the things we’ve become increasingly concerned about as a nation is defending critical infrastructure, people hacking water and electrical systems,” said the academy’s Carlisle.

Case in point, Chow, a leading computer science and cybersecurity instructor at UCCS, got attacked.

A few years ago, on a Monday morning before his anti-virus program had finished running, he clicked on a photo supposedly of alumni from National Taiwan University, one of his alma maters.

“The screen blew out,” he said. “It happened to me, and I teach this.”

And that’s part of the thrill of working in the industry.

“It’s a very exciting profession. It’s like crime fighting, and you have fun,” Chow said.

Math, logic and reasoning skills are needed, Chow said, as well as understanding computer programming and how to get rid of bugs.

“The mental challenge you get out of it is great,” said Dubiel, the Vista Ridge High graduate. “Technology is advancing so rapidly, every day you wake up and there’s a new style of doing something. You’ve got to be able to think on your feet.”

Joshua Alcorn is a Department of Homeland Security project manager who is working on his Ph.D. in engineering with a concentration in security from UCCS. He said the adversarial relationship that exists between the government and corporations and hackers, the multiple dimensions of an attack and developing strategies for potential intrusions all make for intriguing work.

Educators try to catch up

Nationally, cybersecurity professionals report an average annual salary of $116,000, according to the National Initiative for Cybersecurity Careers and Studies.

Schools are scrambling to provide courses that emphasize cybersecurity, an element traditional computer science tracks have not included.

UCCS is one of 200 colleges and universities designated by the National Security Agency and the Department of Homeland Security as a National Center of Academic Excellence in Information Assurance and Cyber Defense — meaning its curriculum fits what’s needed in the job market.

“It’s a very exciting profession. It’s like crime fighting, and you have fun.”
- Edward Chow, UCCS

In the past five years, UCCS certificate and degree programs in cybersecurity have grown. The bachelor of innovation degree in computer security had seven students in 2012. It has 70 this school year.

A $333,000 grant from the National Science Foundation enabled UCCS to integrate cybersecurity into every computer science class and next year share what it has learned with other Front Range colleges, Chow said.

“The nice thing about cybersecurity is it gives people an opportunity to really make a difference very quickly in the defense of our nation,” Carlisle said.

The degree combines standard courses from computer science and electrical and computer engineering with security analysis, telecommunications and cellphone networks, along with computer forensics.

Colorado Technical University’s degrees in cybersecurity started 21/2 years ago, and enrollment has jumped 160 percent to more than 400 students this school year, according to Yanzhen Qu, professor and dean of computer science and information technology.

“The demand in the job market for highly trained cybersecurity personnel and that our program focuses on hands-on training so students gain real-world skills mean our program is booming,” Qu said.

The school plans to add courses in cloud security and mobile security, he said, in light of these new areas of technology.

The college has a new cybersecurity certificate and an associate of applied science degree.

And, Kovaly said, “Due to recent changes and demands in local industry,” the college is developing noncredited training options through its Workforce Development Division.

“So local companies have more robust opportunities to quickly train current and future employees,” Kovaly said. “Oftentimes, waiting for students to make their way through 800-plus hours of academic coursework can be a barrier for local companies, so PPCC is working on noncredit training to fill the gap.”

The word is getting out that education needs to start young.

“This is a technical field that isn’t going to go away and can’t be off-shored,” said David Khaliqi, executive director of the Center for STEM Education and Research at UCCS. “Students often don’t want to make a widget without a bigger, broader picture of what the greater good is, and cybersecurity has a community service aspect that involves creativity and problem-solving.”

“These kids are computer-savvy. They’ve never not had a cellphone or computer available to them”
- Cynthia Olmstead, Vista Ridge

In its fifth year of competition, Vista Ridge’s team recently won first place in the Southwest Region and will be one of 12 teams at this week’s National Youth Cyber Defense Competition in Baltimore.

Sponsored by the Air Force Association, the challenge involves teams of students figuring out vulnerabilities in virtual operating systems.

The competition is all about defense and securing computer systems, which students like because it’s challenging, said Vista Ridge teacher and CyberPatriot coach Cynthia Olmstead.

“These kids are computer-savvy. They’ve never not had a cellphone or computer available to them, so it’s something many of them pick up naturally,” she said.

Olmstead said competing at nationals will open the door for scholarships and internships for the students, who will get to network with industry professionals.

“Not only are they learning lifelong skills, they’re having opportunities to further their education,” she said. “This gives them hands-on experience and helps motivate them toward those careers.”

In all, five CyberPatriot teams from Colorado will compete at nationals, including the local Civil Air Patrol team, and three from the Denver area.

Northrop Grumman, an aerospace and defense technology company, is one of the corporate sponsors, paying part of registration fees and recruiting students for internships.

“It’s corporate America that’s got that responsibility to inspire the academic community and the nation,” Raytheon’s Probert said.

His company also invests heavily in science, technology, engineering and math programs in secondary schools as well as about 75 colleges and universities.

“In the last couple of years, we’ve seen cyber go from a science fiction term to a pragmatic term, with broad awareness being raised,” he said. “We’re starting to see things ramp up, as we need more and more cyber protection with our ATMs, cellphones, emails and personal information.”