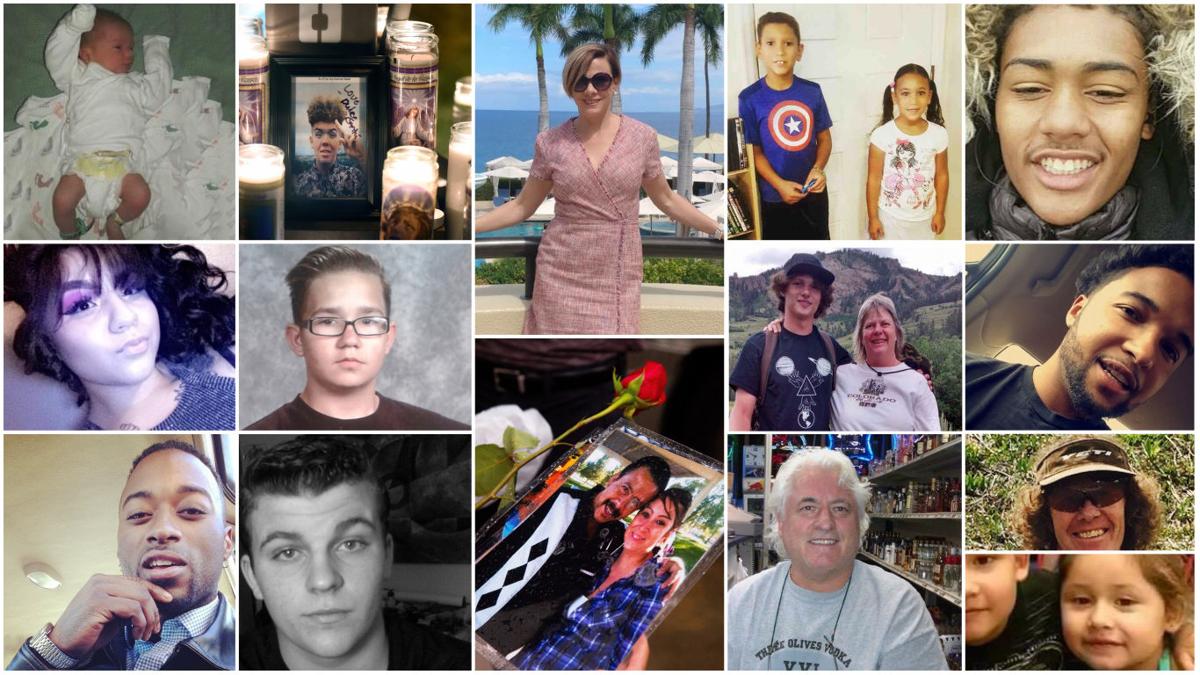 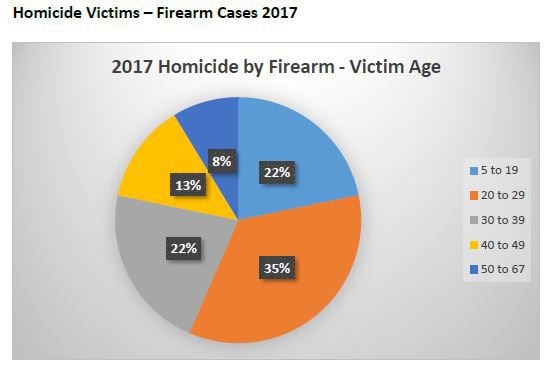 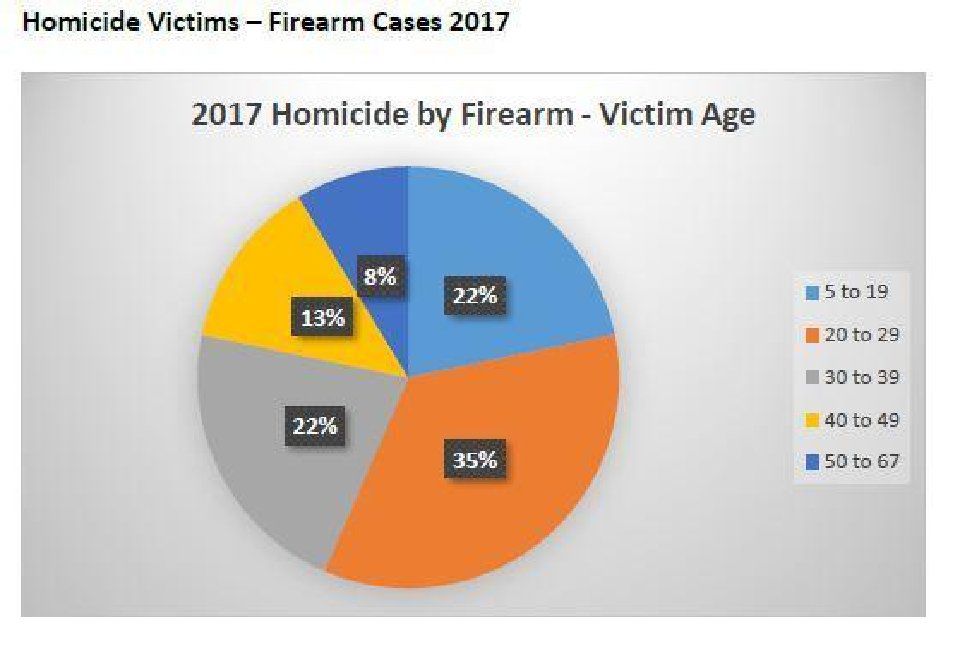 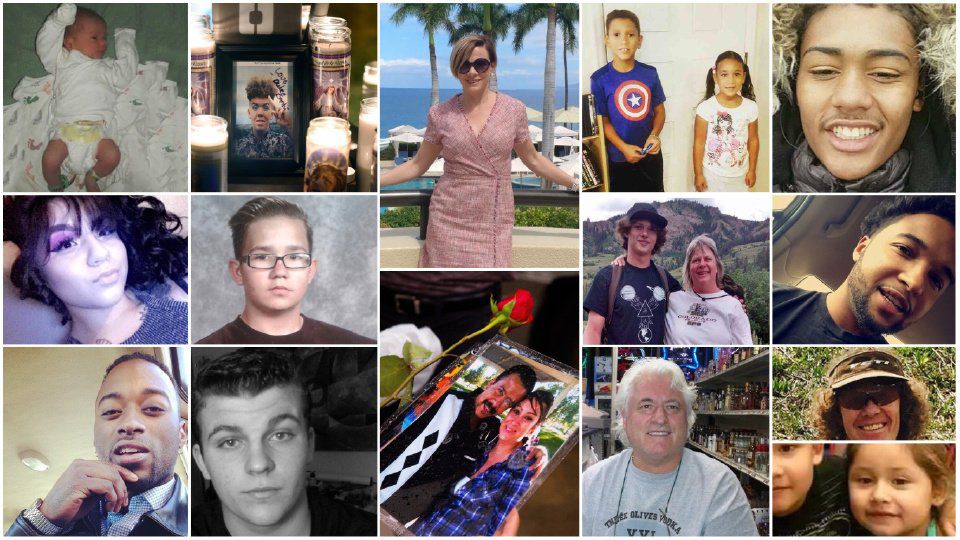 Editor's note: Two outstanding death investigations were ruled homicides in 2018, bringing the city's 2017 homicide total to 33 and the county's total to 39.

Thirty-nine people lost their lives in shootings, stabbings or brutal beatings across El Paso County in 2017, making it the second deadliest year on record.

The death toll is surpassed only by the 44 killings in 2013, according to records.

Most of the deaths - 32 - were in Colorado Springs, matching the record previously set in 2011.

"It saddens us," police Lt. Howard Black said. "One death is one death too many in our city because of the impact it has."

Unlike previous years, during which domestic violence, gang violence and drug deals were largely cited as motives in the killings, 2017's homicides appear more random, bold and bizarre.

There was a business owner and an employee gunned down during separate attempted robberies. There was a well-known cyclist mysteriously killed while on a trail ride. There were two sets of children under the age of 8 who were killed by family members - among four multiple killings that claimed the lives of nine in all.

And there was the rash of homicide investigations involving juveniles, either as gunman or victim. Nine victims were 18 or younger, as were eight known murder suspects - with the youngest being 13. El Paso County hasn't had more than four victims younger than 18 in a single year since 2011, when nine children were killed, six of them under the age of 1, according to a Gazette analysis.

Colorado Springs police, according to Black, have been left to ask: "Was it an interesting year in dealing with juvenile offenders or is this a trend?"

Colorado Springs police statistics show that while overall juvenile violence did not increase in 2017, the number of youth offenders caught with guns spiked significantly.

There were 174 juveniles caught with firearms last year, police said - a 72 percent increase from 2014. The spike mirrored overall gun violence in the city, which jumped 51 percent over the same period.

"It's concerning, the decisions our youth are making," Black said, referring to juvenile offenders rather than victims, because sometimes young victims are "in the wrong place at the wrong time." He declined to say whether that analysis applied to any of the juvenile victims in 2017.

"It's kind of heartbreaking when you look at these numbers," he said.

What motivated most of the juvenile deaths last year has not yet been explained but likely will be once suspects go to trial. One youth killing, though, remains a mystery, according to the victim's family.

Nathaniel Czajkowski, a 16-year-old rap artist who also went by the name Nate Winters, was gunned down outside an Albertaco's restaurant on Oct. 29. Two friends with him also were wounded. The group had reportedly attended a party earlier where three other people were shot and wounded.

Police have not made arrests or identified suspects in either shooting.

"None of them had known enemies," Czajkowski's father, Fraser Czajkowski said of his son and his two friends.

He said he worries he may never know who killed his son, and police silence only enhances that fear.

"All they say is it's an ongoing investigation," the father said. "The only way this thing will be solved is if somebody drops a dime and turns on the guy (the shooter)."

Speaking generally, El Paso County Sheriff's Investigations Lt. Cy T. Gillespie said that's sometimes the way homicide cases go. Agencies can't make promises that murderers will be caught, they can only investigate to the best of their abilities - and resources - and "go where the leads take us."

"There's no way to anticipate when a lead will break, and no way to force it," Gillespie said.

What can be helped, though, is keeping youths from getting guns, Black said.

Police know that juveniles are finding guns left in vehicles, unsecured at home or in the homes of their friends and family, or even in the homes of strangers during burglaries, he said. Ending juvenile gun violence starts with responsible gun ownership, he said.

"We have to pay attention when we own weapons," Black said. "It really is an education piece."

The department plans to saturate social media and other platforms this year with reminders for owners to properly store and secure weapons in the car and in the home, and to encourage parents to talk to their kids about gun violence.

The majority of homicides last year have been "cleared" by arrests or justification, continuing consistently above-average solve rates for both city police and the sheriff. The Sheriff's Office maintained 100 percent clearance from 2012 to 2015, and police routinely are at 80 percent to 90 percent clearance rate per year.

The national clearance rate for cities comparable to Colorado Springs, with populations between 250,000 and 499,999, is 50 percent, according to records kept by the Federal Bureau of Investigation.

Still, six of 2017's killings remain unresolved, though not to the same degree.

The officer-involved shooting of Christopher Willard, who reportedly brandished a BB pistol at police, will technically remain open while the 4th Judicial District Attorney's Office determines if it was justified. The death of Andrew Jack Cole appears to be on the same track; after Cole was found shot to death in a home outside of Fountain, the Sheriff's Office said all parties were accounted for but did not make any arrests, hinting at possible self-defense.

The death of inmate Daniel Pena, who was reportedly assaulted by fellow inmates at the Cheyenne Mountain Re-Entry Center, also remains open but is being investigated by the Colorado Department of Corrections.

Authorities have not identified suspects in the remaining three homicides, including Czajkowski, despite months of investigation. The others:

- Kenneth John Hatcher Jr., 24, was shot and killed Aug. 20 outside of The Playing Field Sports Bar on North Academy Boulevard.

- Tim Watkins, 60, was found shot to death Sept. 17 in the Mount Herman area after going missing on a bike ride three days earlier.

"The appearance of inactivity does not mean there's no activity," Gillespie said.

"We never give up," Black agreed.

Unless new clues surface, an arrest in the shooting death of Palmer Lake cyclist Timothy Watkins is unlikely, a prosecutor and top investigato…