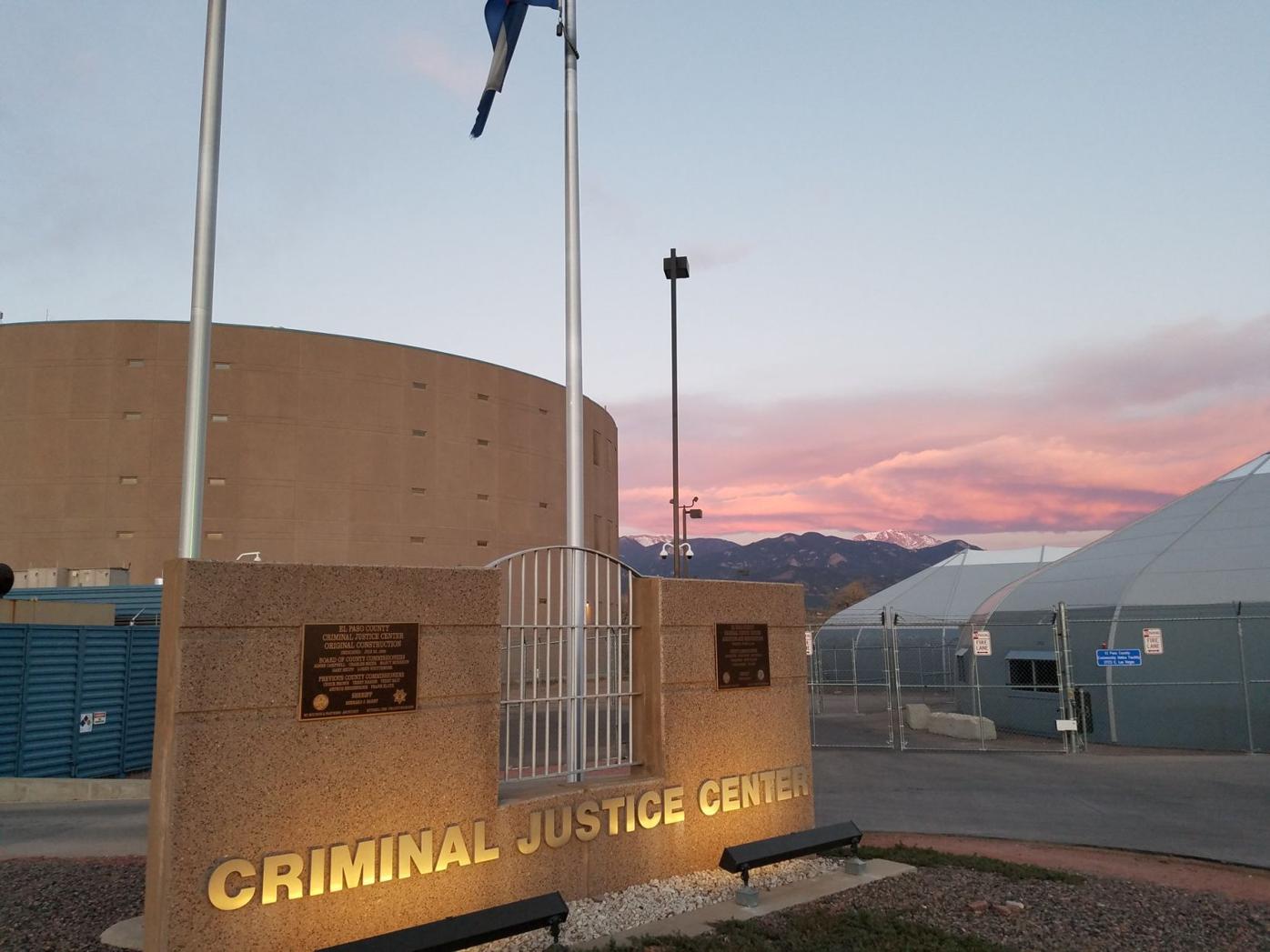 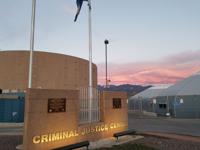 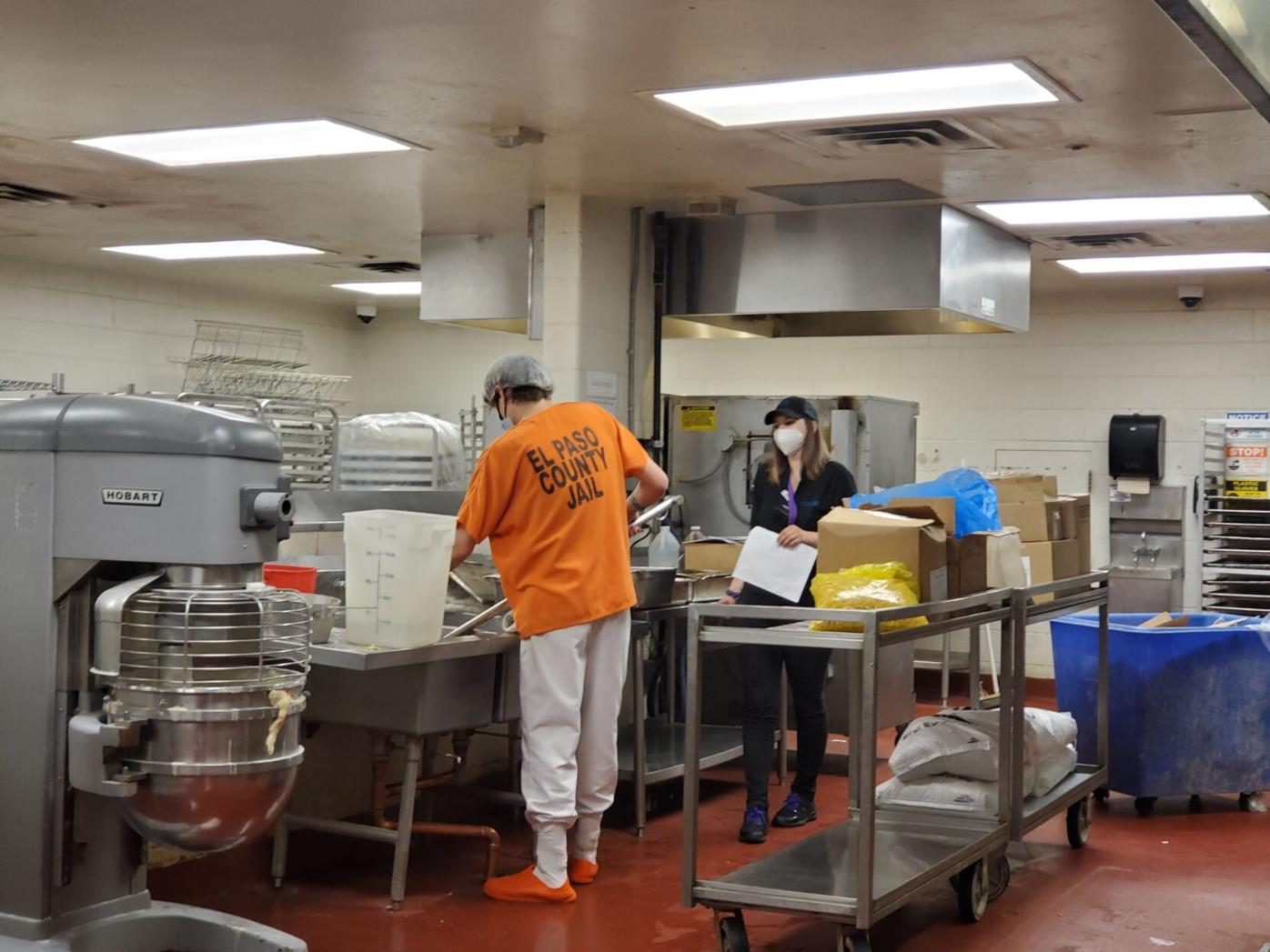 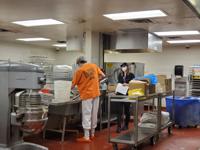 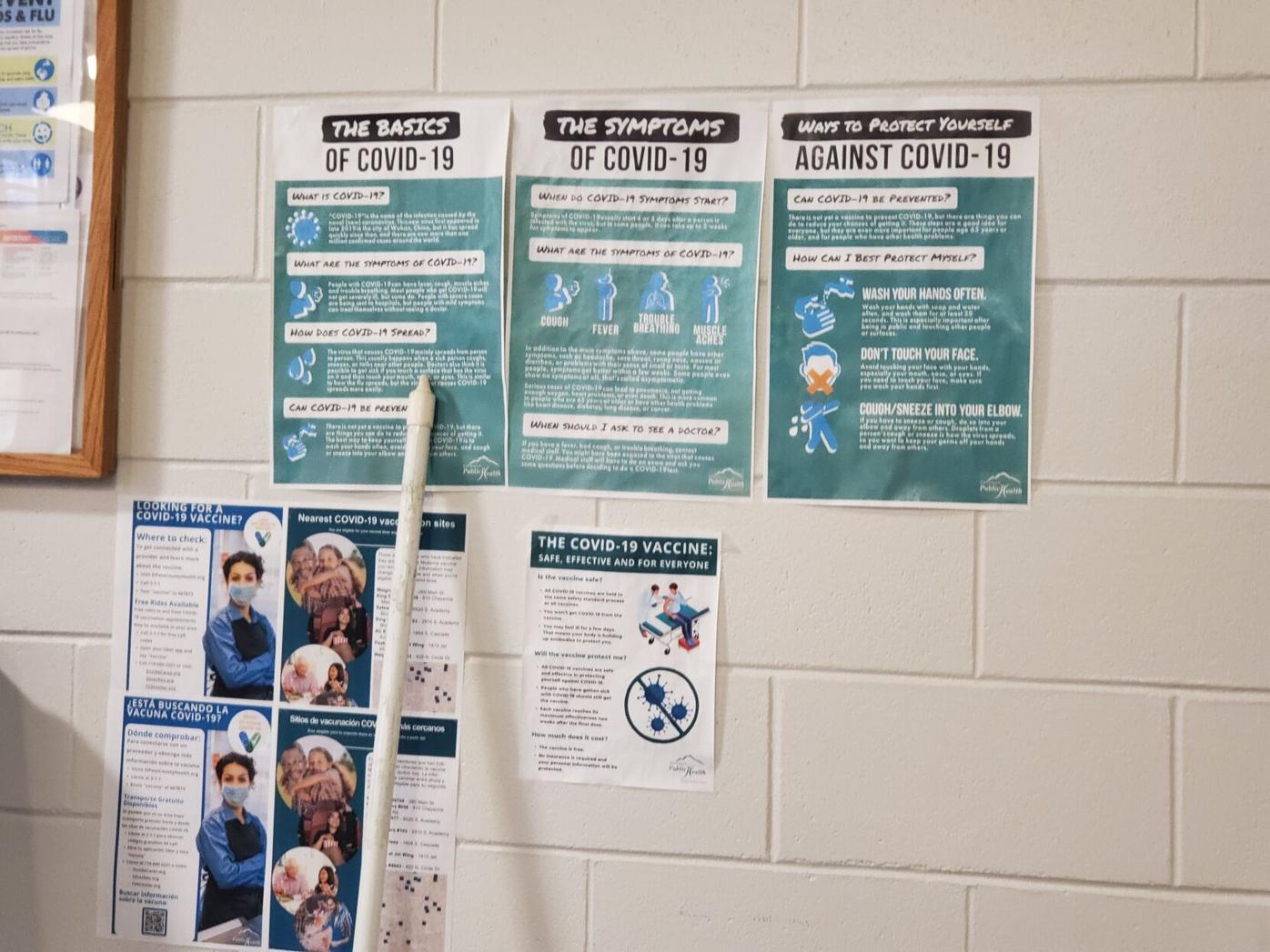 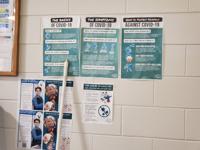 Educational posters are hung up throughout the jail to provide more information to inmates about COVID-19 and preventative measures, El Paso County Sheriff's deputies said. 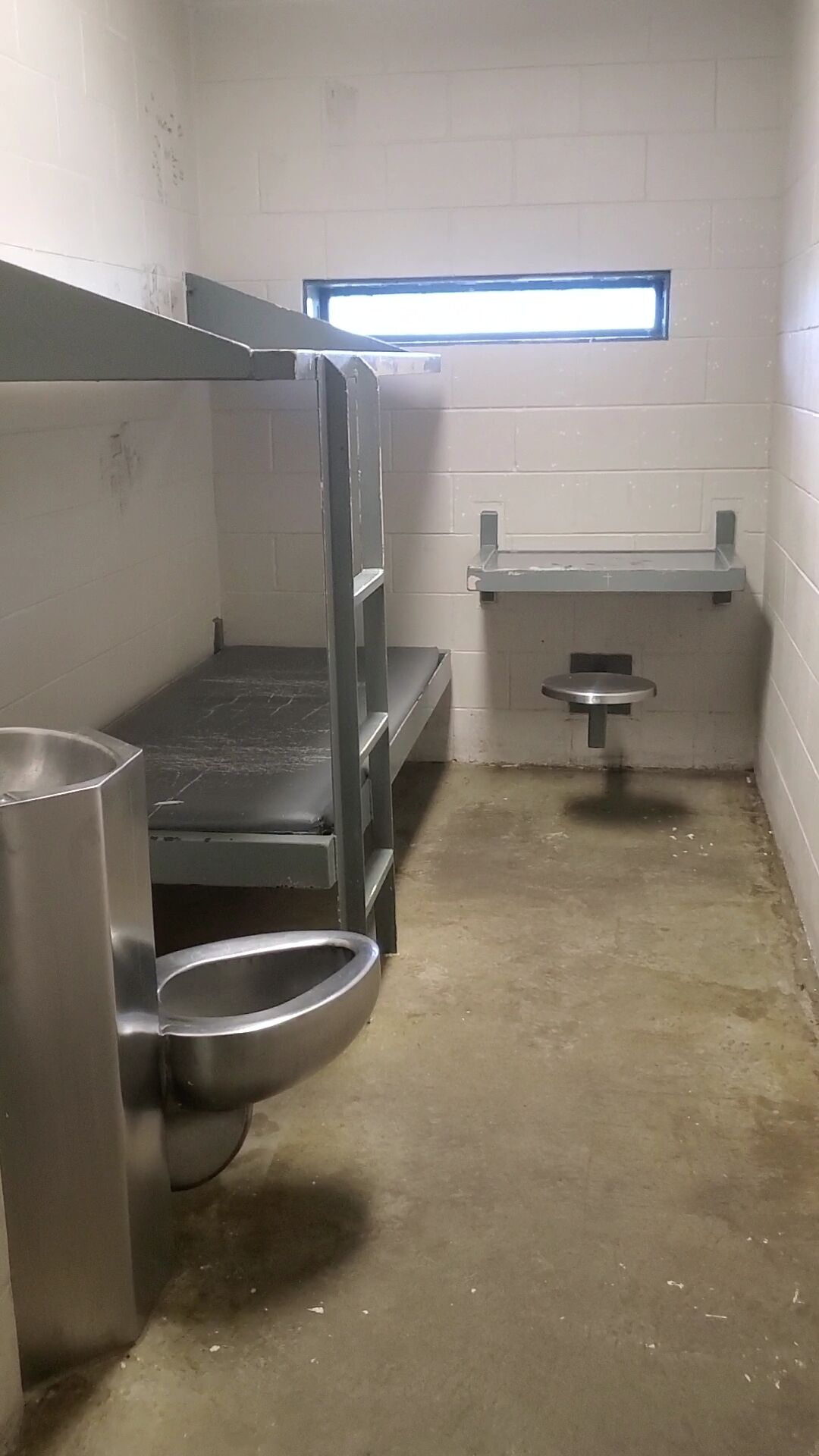 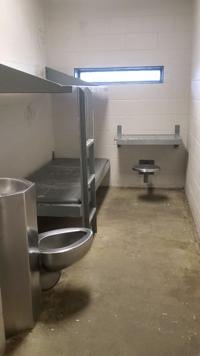 A look inside a cell at the El Paso County jail, which include concrete bunks, a toilet area and a desk. The small size can make physically distancing inmates difficult, jail staff said.

Nearly a year after the El Paso County jail became the site of a record coronavirus outbreak last fall, Sheriff’s officials say they are doing all they can to mitigate the spread of the infection within the facility’s walls.

Since mid-July the jail has seen an uptick in COVID-19 cases among its staff and approximately 1,300 inmates, the first significant spike in cases reported at the jail since late January, according to data from the Sheriff’s Office’s website. The Sheriff’s Office reports new case numbers weekly if there are more than five new cases in a week.

Last Monday, the most recent day data was available, El Paso County Sheriff’s reported four cases among staff and nine among inmates, down from the summer peak on Sept. 6, when 60 inmates and six deputies tested positive.

The recent increase in cases at the jail mirrors heightened disease spread in the community, Sheriff Bill Elder said, driven by the highly transmissible delta variant. As new inmates enter the jail, and as deputies and other contractors move in and out, the chance of spreading the virus increases, officials said.

“When we see a spike in the community that same spike translates directly to the jail … There’s no way to stop it because we have to keep bringing people into the facility,” Elder said. “As long as we do that, we’re going to have COVID patients in the facility.”

New cases are being added to the tally of 1,456 total jail staff and inmates who have been sickened in the facility’s largest coronavirus outbreak since it erupted in late October 2020, which is still not considered “resolved,” outbreak data updated Wednesday by the Colorado Department of Public Health and Environment show.

The outbreak is the largest among jails and prisons in Colorado, according to state data, but Elder said safety protocols were keeping recent case numbers well below what they were last fall.

“All of those processes we did are what are helping keep a major outbreak from occurring again,” Elder said, adding there have been no inmate deaths and only a small number of hospitalizations caused by the virus.

State data show there have been no COVID-related deaths at the jail during the outbreak.

Polis: COVID-19 spread in Colorado may be slowing slightly

Three inmates died at the jail in September; the El Paso County Coroner’s Office will determine their cause of death, sheriff’s officials said, though the department announced last week there was “no indication” one of the inmates — 33-year-old Steven Thorne, who died Sept. 25 — died of COVID-19.

Last December the ACLU filed a class-action lawsuit against Elder, the sole defendant, alleging his “disordered, mismanaged” policies led to the outbreak that at the time had sickened more than 1,000 people incarcerated there. The county settled the lawsuit in May, agreeing to pay $65,000 while the sheriff’s for-profit jail medical care provider, WellPath of Nashville, Tenn., agreed to pay an additional $30,000 as part of the deal.

The settlement left in place a series of safety improvements at the facility, intended to keep inmates healthy while the pandemic continues, including a requirement that all inmates receive two free masks, and guards and staff members wear masks or face discipline.

Elder claimed the lawsuit alleged safety violations that didn’t exist at the jail, saying the Sheriff’s Office rolled out rapid response early in the pandemic, implementing an incident command center to lead that response with guidance from Public Health officials. Officials also spent $15.6 million in COVID-19 relief funds last year to make improvements to the jail, such as replacing faulty locks on cell doors to prevent inmates from leaving their cells and spreading the virus, and upgrading the jail’s ventilation system, officials said.

“We were doing anything and everything we could to get on top of it and stay on top of it,” Elder said.

But when a medical expert with the ACLU toured the jail in mid-December, they “did not find that the jail was following the appropriate safety protocols but helped come up with policies that El Paso could put in place to make the jail safer and to stop the spread of COVID there,” Arielle Herzberg, a staff attorney with the ACLU of Colorado, said. “At the time we filed the lawsuit, over 1,000 people in the jail were infected with COVID. We brought the lawsuit so the jail would put protections in place.”

Elder and his deputies maintain they implemented safety measures before the ACLU filed its lawsuit and those protocols will remain until there are no more positive cases in the jail, Elder said.

“These inmates are your neighbors, family, friends, bosses, employees,” Sheriff's Office Cmdr. Cy Gillespie said during a tour of the jail with media in July, The Gazette’s first look inside the facility during the pandemic. “They’re your people. We want to take care of them because that’s our job.”

Derrick Bernard Jr., a local radio personality and community activist better known as Phoenixx Ugrilla, said safety protocols and medical care in the facility were “horrible,” alleging inmates are not wearing masks or being tested for COVID, and said there was little to no physical distancing in the facility, contributing to the spike in cases.

Ugrilla spent six and a half months at the jail, from mid-January to early September, when he was released.

Deputies acknowledged mask compliance among inmates at the jail was poor and said the jail’s layout complicated physical distancing efforts.

Cmdr. Lari Hanenberg estimated about 25% of inmates regularly wear their masks. A Gazette reporter in July observed inmates wearing masks when moving throughout the facility, while some did not wear them in other areas of the jail, like open recreation wards.

Deputies encourage inmates to wear masks by reminding them they can contract the virus from the deputies, Gillespie said. He also ordered deputies not to interact with inmates who aren’t wearing masks, he told reporters on the tour, motioning to an unmasked inmate speaking to a deputy in one of the wards.

“You can only do so much. If inmates choose not to wear a mask, I’m not going to wrestle them. … You can lead a horse to water, but you can’t stick their head under it,” Gillespie said.

Open wards in the jail can hold up to 72 inmates, while smaller locked jail cells include bunk beds, not conducive to six-foot social distancing recommendations, Hanenberg said.

“Your six feet goes right out the window,” she said. “At one point we went so far as to tell the inmates one has to have his head at this end of the bed and the other is at this end of the bed. … That’s really the only way we could effectively try to keep them away from each other distance-wise.”

Posters plastered across the jail summarize the basics of COVID-19 and its symptoms, and list preventative measures — part of efforts to educate inmates about the virus, deputies said.

Inmates who want a vaccine or test can get them, but most inmates don’t request either service, deputies said. Inmates exhibiting COVID symptoms are also mandatorily tested, they said.

Last week, about one-third of inmates were tested, Sheriff’s spokeswoman Lt. Deborah Mynatt said. From February through September, 602 inmates have been vaccinated, she said.

But Ugrilla argued testing wasn’t being done, claiming at one point during his incarceration he was COVID symptomatic and for 23 consecutive days requested WellPath employees test him. He never received a COVID test, he said.

Judy Lilley, a WellPath spokesperson, did not address Ugrilla’s claim directly with The Gazette.

“We care for large numbers of people in close quarters and do all that we can to keep our patients and employees safe and healthy,” Lilley said. “This includes taking aggressive actions to prevent the virus from entering in the first place, including frequent reminders to our staff and all personnel coming into our facilities to wear a mask at all times and to get vaccinated. As per the most up-to-date clinical information, the treatment for COVID-19 and the delta variant remain symptomatic.”

Ugrilla also alleged outbreaks were coming from areas of the jail where large numbers of inmates work. In the kitchen, he claimed in July, employees with Trinity Services Group, the jail’s food contractor, were “quitting or taking extended leave to escape” the outbreaks.

Elder said it was possible Trinity employees may have contracted COVID or been exposed to someone who was COVID-positive and were sent home to isolate or quarantine. He also said jail staff resolved a recent outbreak among inmates working in the kitchen through isolation and quarantines.

Calls to Trinity Service Group’s lawyer were left unreturned as of Friday.

Ugrilla said another outbreak in the laundry facility sickened inmates working there in July and left other inmates without clean clothes or bedding, sometimes for several weeks.

Elder dismissed the claim. “There’s no way we could function that amount of time” without working laundry equipment, he said. “If you shut that facility down for weeks, the amount of laundry that would have to be done would be — I don’t know that you’d ever catch up,” he said.

Ugrilla called on the Sheriff’s Office to better address the virus in the jail.

“The situation definitely needs to be mitigated a little bit better … This is going to be way worse because the variant’s stronger,” he said.

Elder said he is committed to protecting inmates at the jail regardless of the ACLU lawsuit.

“We will continue to (enact regulations) because that’s the right way to deal with it. I don’t want employees exposed, I want inmates treated if they need it, and I want them to understand how serious we take this.”

The El Paso County Board of Commissioners on Tuesday agreed to pay $65,000 to settle a federal class-action lawsuit alleging that Sheriff Bill…