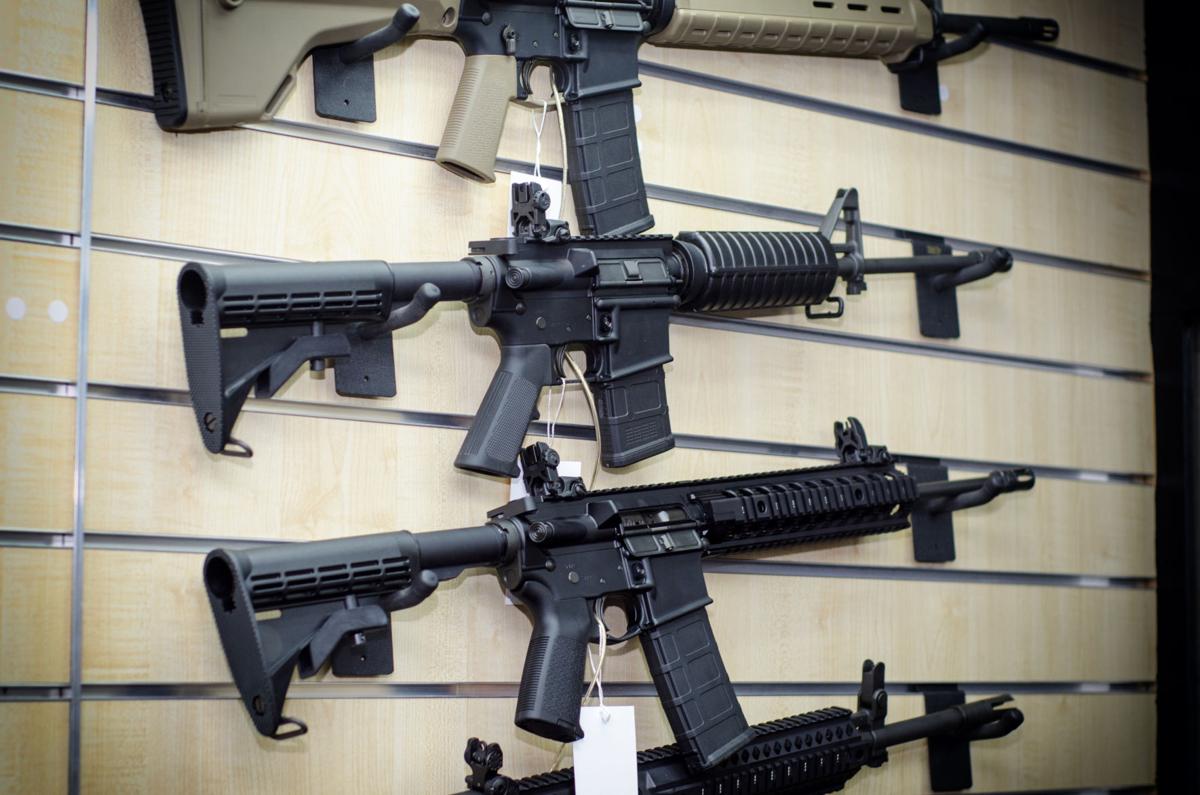 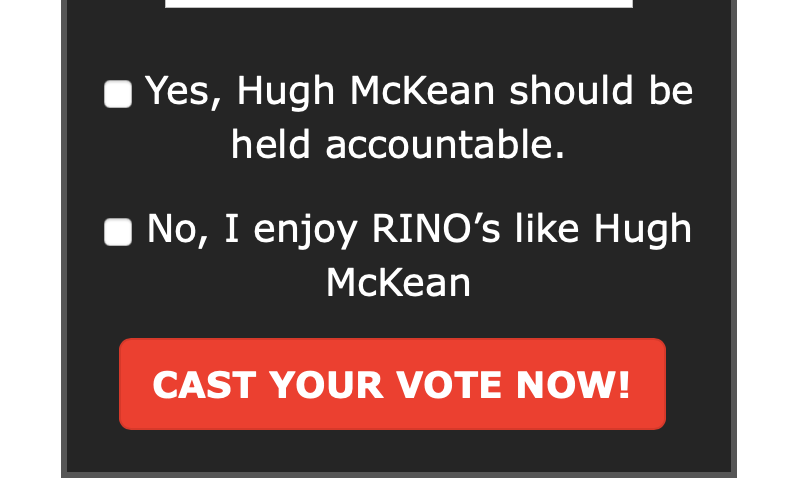 An email survey from Rocky Mountain Gun Owners asking for a “no confidence” vote on Minority Leader Hugh McKean, R-Loveland. 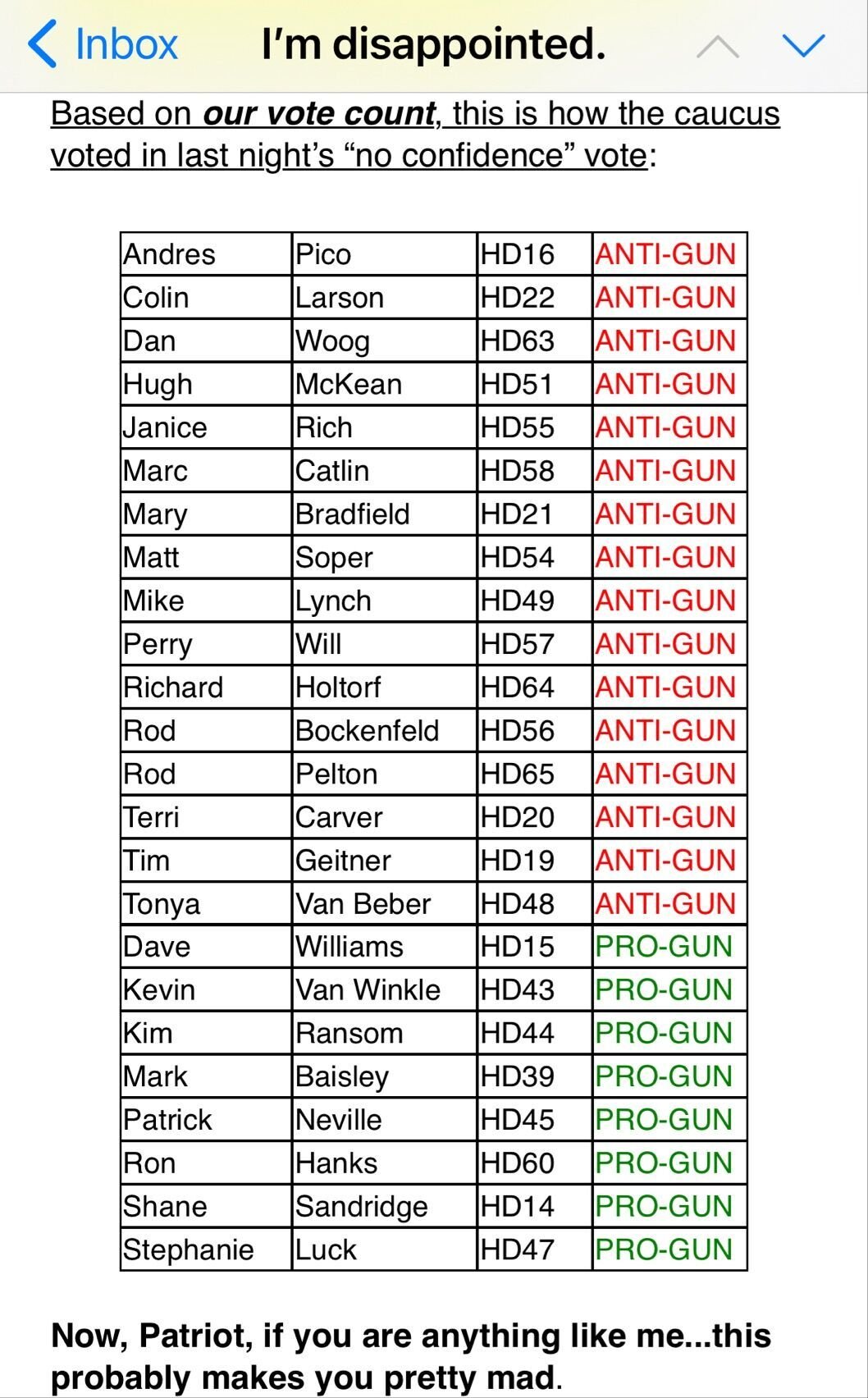 After attacks from the right in the wake of a failed vote to oust House Minority Leader Hugh McKean, a group of House Republican lawmakers and the state Republican Party are calling on Rocky Mountain Gun Owners to put an end to the infighting.

The group, closely linked with former Minority Leader Patrick Neville of Castle Rock, was among the forces on the right agitating for the removal of McKean in the waning days of the legislative session. It  put its opposition to McKean, R-Loveland, in part down to an accidental vote in favor of House Bill 1298, a bill that bars firearm sales for five years to anyone with certain violent misdemeanor convictions.

At the time, McKean said he had been looking at information on the bill on his computer, and hit the wrong button. He immediately asked for a revote, known as reconsideration, but was effectively denied by House Majority Leader Daneya Esgar of Pueblo when she asked that the House deny him that request.

That initially prompted the gun owners group to send a fundraising email labeling McKean as anti-gun, despite the fact that McKean had spoken against the bill the previous day.

The group on Tuesday went on the attack again, distributing an email survey that asked for a vote of "no confidence" in McKean and calling him a RINO (Republican in Name Only). The email didn't say that McKean's vote on HB 1298 was in error and claimed House Republicans planned to strip him of his leadership position.

Later that day, Senate amendments to the bill allowed McKean his revote, which he shared with Rocky Mountain Gun Owners Executive Director Taylor Rhodes on Twitter, prompting a back-and-forth, and beat back a challenge to his leadership by a 15-8 vote that he did not participate in.

What about you attempting to kill Colorado’s “Shall Issue” CHP law? What about the $200,000 you wanted to pull from the general fund to finance gun control? Or what about last night when you voted anti-gun again? This isn't the first time, Hughie. #coleg #copolitics https://t.co/to7okwcDUc

Though the vote was conducted by secret ballot, the group released its internal whip count with the eight members who voted to remove McKean labeled as "PRO-GUN" and McKean and his backers labeled as "ANTI-GUN."

In a statement released Wednesday, Colorado GOP Chairwoman Kristi Burton Brown and 16 members of the House Republican caucus urged "our fellow Republicans to dismiss false accusations that any member of our House caucus is anti-gun.

“This session, Democrats shamefully voted to endanger Coloradans’ concealed carry permits and take away their right to self-defense," the statement said. "Rocky Mountain Gun Owners should join in defending lawful gun owners against the real opponents of the Second Amendment — the Democrats.”

Not completely true…look at Baisley.

LEGISLATIVE WRAPUP | What went down under the Gold Dome, and where does it lead?

The politics and governance from the previous 116 days was much the same: Issues around the economy, health care, guns and taxes rose and fell with an unpredictability seemingly driven by gravity, only at a more forceful clip this year.