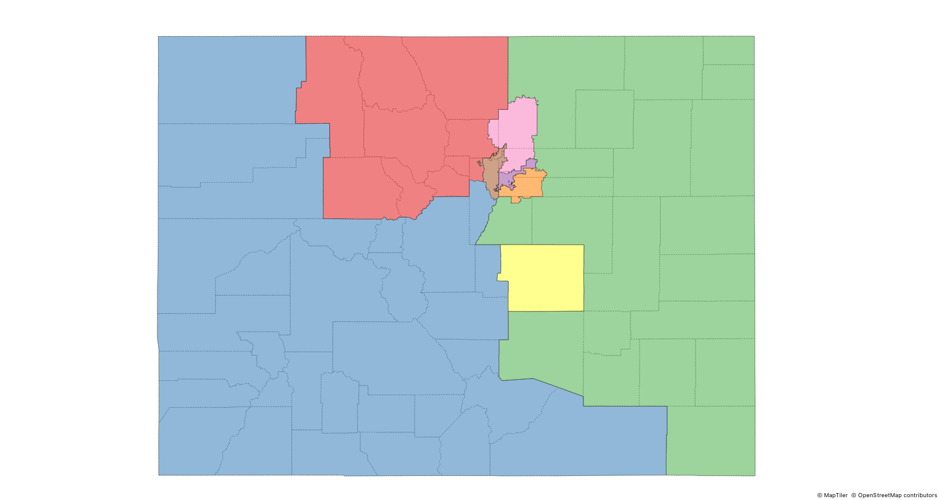 The Colorado Hispanic Chamber of Commerce has stepped into the congressional redistricting ring, proposing a district map plan that they argue would give the proper voice to the growing Hispanic community in the Denver-area suburbs.

The group has proposed a map that would include a district that would group together the areas north and northeast of the Denver metro area, which includes a significant and growing Hispanic population. It would include portions of Adams County, southwest Weld County and Greeley, and northeast portions of Boulder County. It would be 26% Hispanic and in total 32% nonwhite.

“The district prioritizes communities of interest that may be subject to federal legislation around growth and transportation and the intersection of oil and gas development with air- and water-quality concerns,” a press release from the group described.

The group also proposes a district like the current Congressional District 1, mostly preserving the county of Denver. That district would be roughly 20% Hispanic and 10% Black, with a total 35% nonwhite.

Like the current Congressional District 1, the district would be a heavy Democratic-favoring district.

With the proposed plan, the Chamber joins a short list of advocacy groups that have so far presented maps to the independent congressional redistricting commission.

But the maps presented to the commission already show how conflicts over the next decade’s map are beginning to take shape.

The Chamber’s plan also proposed districts for the rest of the state, including a three-way split of the state’s rural areas, which is at odds with what the rural counties have asked for — a pair of districts with one in the east and one in the west.

At the same time, other individuals have advocated for a district plan that doesn’t split southern Colorado’s Hispanic and Latino communities, located in Pueblo, Trinidad and the San Luis Valley, like the rural counties’ east-west divide proposal would.

At the commission's Wednesday hearing, Commissioner Simon Tafoya, a Denver Democrat, pressed a representative from one of the rural county associations on whether those communities are not served best by being split.

Brian McCain, the chief operating officer for Action22, a coalition of southern Colorado counties, said he thought the plan backed by his organization, along with Pro15 and Club20, representing the rest of the state's rural counties, isn't perfect. He told Tafoya that ideally, southern Colorado wouldn't be split, but that given the population requirements, the plan jointly proposed by the three groups is the best option.

The result of the Chamber’s proposed non-urban districts is a map with four solid Democratic districts, three solid Republican districts and one that leans 6% Democratic.

The Chamber’s plan has detractors already.

“This proposal *fractures* the Latino voice in CO, would result in zero minority districts (when 2 are possible) and is deliberately designed to protect an incumbent,” Jennifer Parenti, a redistricting specialist with the civic and democratic rights organization Common Cause, said in a tweet this week about the Chamber’s map. “These are violations of federal law and CO Constitution. It's a bad map and should not be given any press.”

Parenti did not respond to requests to further clarify her tweet.

Colorado’s independent redistricting commissions are, in fact, independent from the state’s political class and their desires, the state Supreme Court ruled Monday, rebuffing lawmakers, the governor, the secretary of state and the attorney general.

“Now THIS is Colorado,” reads the highway sign welcoming visitors to Chaffee County. And it’s easy to see why.