Gov. Jared Polis on Wednesday issued an amended order tied to the investigation by Attorney General Phil Weiser regarding the death of Aurora man Elijah McClain.

In announcing the amended order, a statement from the governor said "some technical changes were made to the Executive Order three weeks ago. While those changes broadened the scope of the Attorney General’s authority to prosecute wrongdoing, they were taken by some in the wrong way and were hurtful to others, which was far from the intent. This amendment incorporates language from the original Executive Order and maintains the expansion of prosecutorial authority given to the Attorney General."

Additionally, Jacki Cooper Melmed, the governor's chief legal counsel, said that “the intent is and always has been to allow the Attorney General to conduct a complete and impartial investigation of this matter." 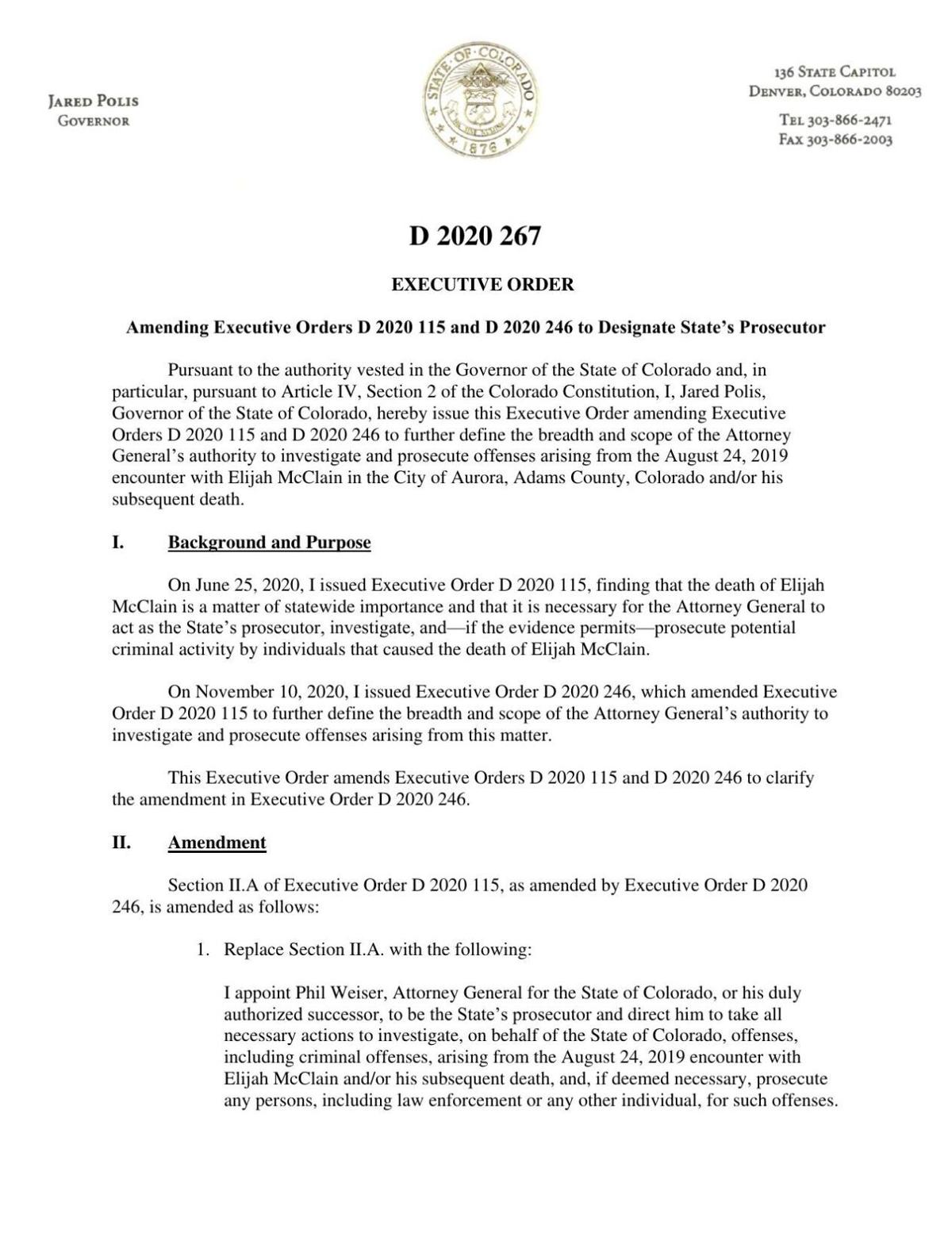 The first executive order, issued June 25, stated that Weiser could take all necessary actions to investigate “any potential criminal activity by law enforcement officers or any other individuals that caused the death of Elijah McClain in Aurora, Colorado in August 2019.” The Nov. 13 order extended the original, and stated Weiser can investigate “offenses arising from the August 24, 2019 encounter with Elijah McClain and/or his subsequent death, and, if deemed necessary, prosecute any persons for such offenses.” 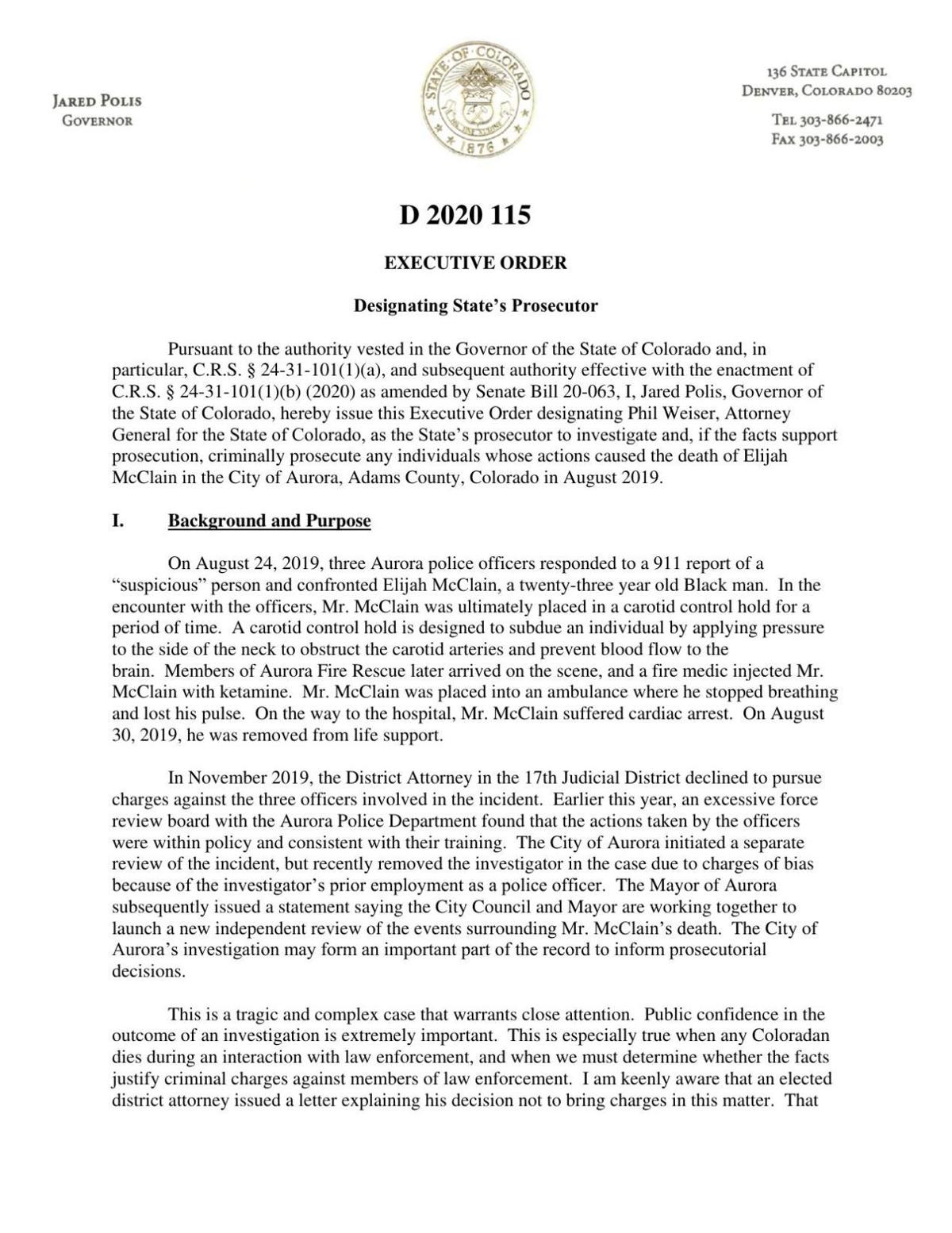 The Nov. 13 order took out what some viewed as critical language on investigating law enforcement officers. At the time, the Attorney General's office gave out little in the way of clarity about what the changes in the executive order meant.

Attorney General spokesman Lawrence Pacheco, in an email to Colorado Politics, said the order “provides clarification of the Department of Law’s authority to investigate and prosecute any crimes related to this case. The investigation continues and it will be thorough, guided by the facts, and work to build public trust in the criminal justice system. The Attorney General’s Office has no further comment at this time.”

That left questions about how to interpret the order. McClain family attorney Mari Newman told Colorado Politics last month that the order could mean that more than just law enforcement could be held responsible for McClain's death. Or it could mean something worse — that law enforcement might not be held accountable at all.

Wednesday's executive order puts "law enforcement" back into the order as among those who could be held potentially liable for McClain's death.

McClain died on Aug. 30, 2019. He was a 23-year old Black massage therapist, headed home the evening of August 24. McClain was stopped by police after a caller reported a suspicious man. He was stopped by three Aurora police officers, slammed into a wall and placed in a chokehold. Paramedics called to the scene administered ketamine, reportedly in a dose twice the amount required for a man of his small size. He suffered a heart attack, was pronounced brain dead three days later and was removed from life support six days after the encounter with the police.

Since his death, at least five investigations have been launched, by the state, the city of Aurora, the Aurora Police Department, and a combined investigation among the U.S. Department of Justice, the U.S. Attorney’s Office for Colorado and the local branch of the FBI. Weiser has launched a second investigation, into the practices of the Aurora police department. One of the three officers involved in the death — Jason Rosenblatt — has been fired because he responded "ha ha" to a photo sent by three other police officers that mocked McClain's death. He is now suing the city over that dismissal.

McClain's death has become part of the rallying cry for justice from the Black Lives Matter movement, both in Colorado and nationwide. 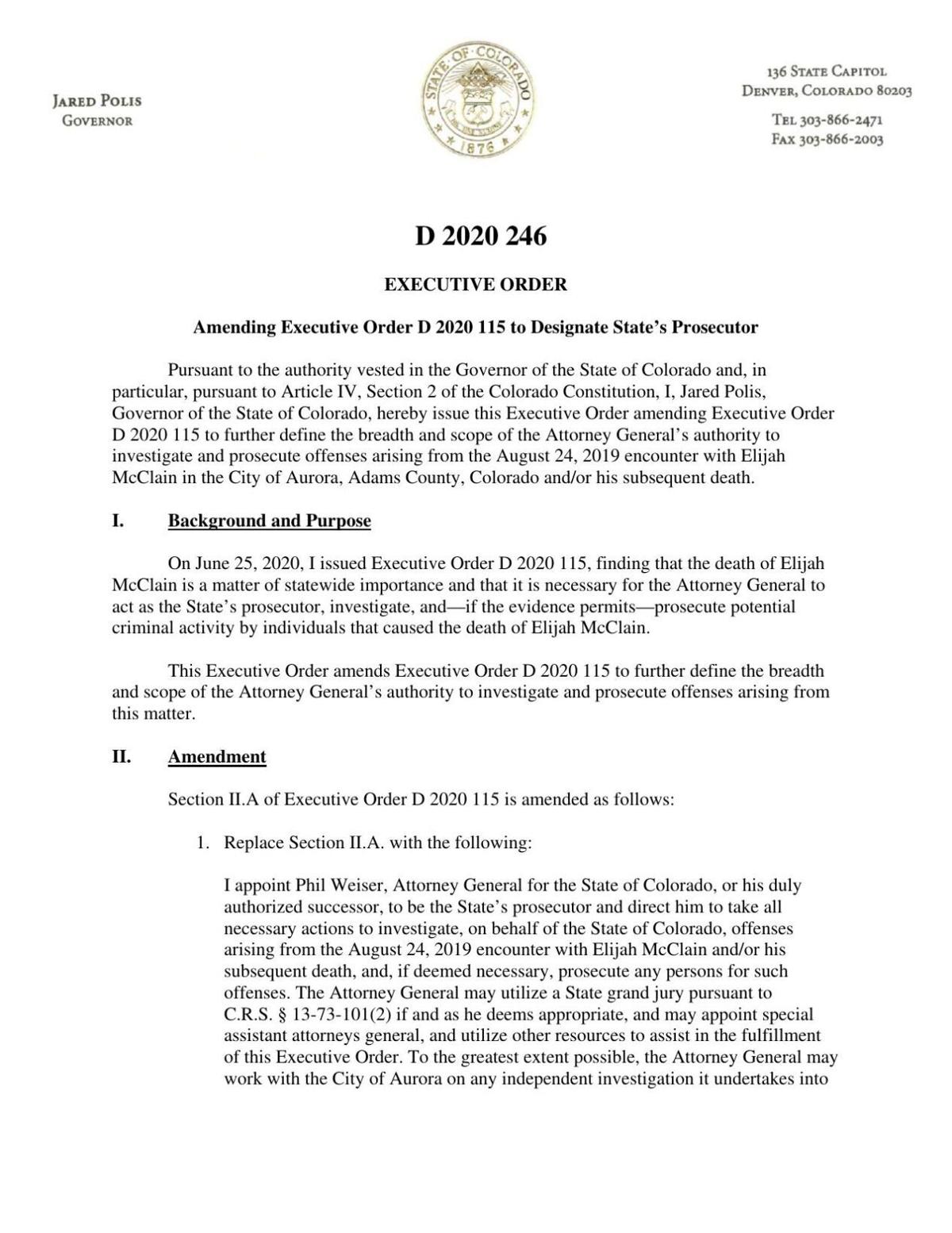 INSIGHTS | Denver’s race issues fueled by the flames of history

Joey Bunch: "The legacy of Preston Porter Jr. focuses solely on how he died and why, but it's a monument to failed justice. You could say the same for George Floyd or Elijah McClain."