"Preliminary," however, is mostly a formality — Commission Chairman Jeff Robbins confirmed the setback rule is final, but all the rule changes must be adopted at once in a final vote, expected by Nov. 1.

Commissioners Monday closed the record on drafting and finalizing those rules, meaning they will stop taking evidence and hearing testimony, which they've been accepting since Fall 2019.

Robbins said he and a majority of commissioners determined the new setback rules met all three requirements set forth by Colorado law to guide oil and gas industry regulation, the first being to “provide substantially equivalent protections for public health, safety and welfare.”

The rules are being changed and established by the COGCC, which was modified by Senate Bill 19-181. That law changed the group's mission from a body that advocated for oil and gas development to one that regulates “the responsible development and production” of oil and gas in a manner that protects public health, safety and welfare, wildlife and the environment. It also changed the commission from a volunteer body to a full-time professional one.

The new setback rules increase the distance from the current 500 feet that operations must be located from homes and most any occupied structure, including schools. The new rules take effect Jan. 1, 2021. Any existing permit applications filed, but not conforming to the new rules, must be refiled under the new rules.

Commission Director Julie Murphy said during the hearings Monday there’s a “large backlog of permits filed” that have not been approved, and the staff has been asking operators to prioritize the most viable ones. She could not estimate how many pending permits would have to be re-filed to conform with the new setback rules.

Robbins praised staff and commissioners for taking evidence and testimony from a “diverse group” of 93 stakeholders.

Republicans, the Colorado Cattlemen’s Association and some industry representatives had harsh criticism for the group last week, saying that the rule “would be a de facto ban on drilling for oil and gas in Colorado.” Those industry advocates have repeatedly cited a study done in 2018 showing a 2,500-foot setback would render some 85 percent of private, non-federal, undevelopable.

Robbins said during a conference call with reporters Monday commissioners didn’t agree with that study’s findings.

“There was sufficient evidence and testimony that the 2,000-foot setbacks, with the off ramps, is the appropriate place to be,” Robbins said.

Republican legislators and industry proponents have alleged the commission is circumventing the will of a majority of Colorado voters. In 2018, voters soundly defeated Proposition 112 that called for a minimum 2,500-foot distance requirement for fracking or drilling wells. 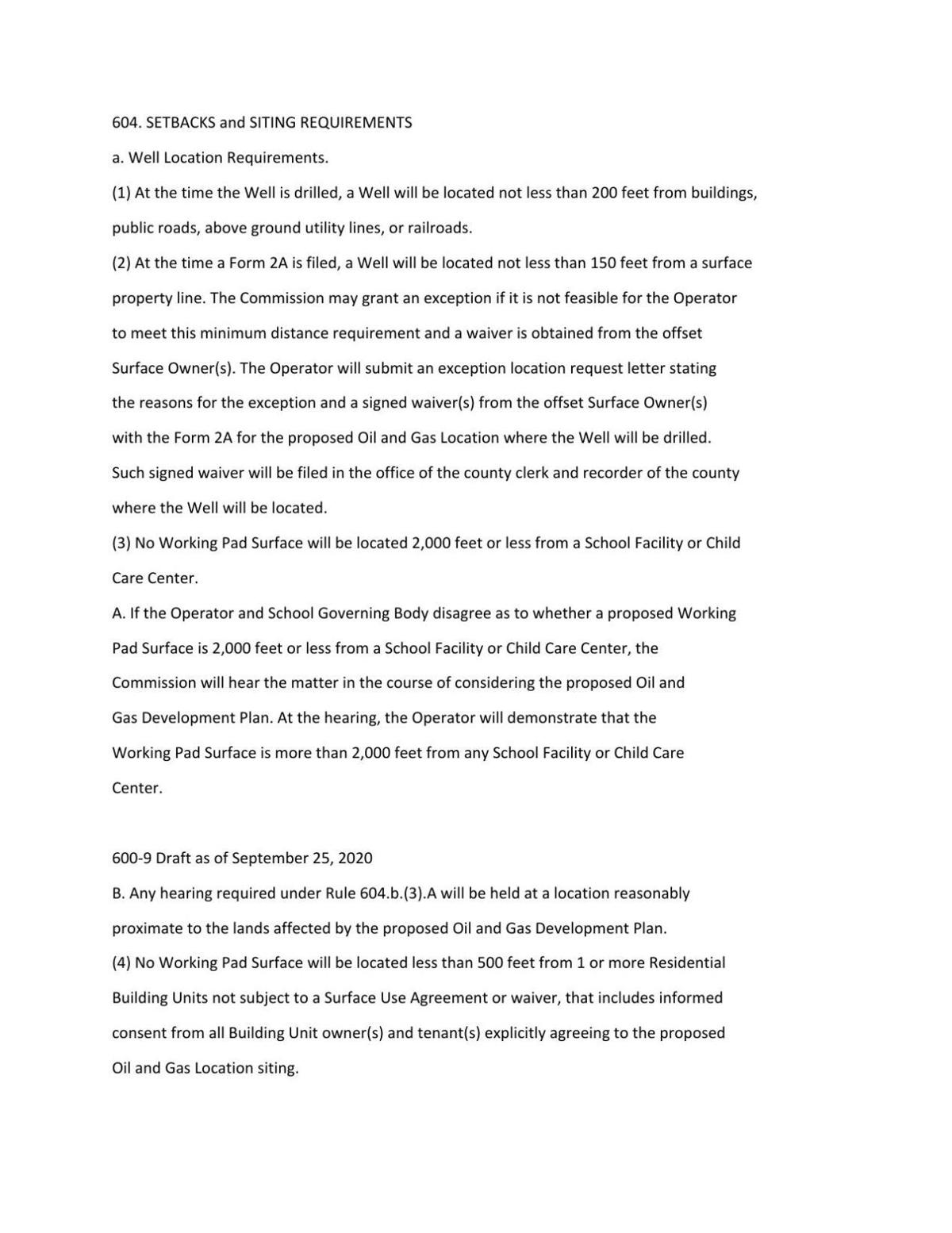