A judge in Colorado's 10th Circuit has ruled in favor of U.S. Rep. Lauren Boebert, R-Silt, in a lawsuit over blocking constituents on Twitter.

Judge Daniel Domenico turned down a request for a preliminary injunction against Boebert filed by former state Rep. Bri Buentello, a Pueblo Democrat, whom Boebert had blocked from her personal Twitter account, which she uses for announcements related to her congressional activities.

Buentello criticized Boebert for remarks Boebert made on Twitter during the Jan. 6 insurrection at the U.S. Capitol, which got her blocked from Boebert's personal account.

The ruling takes a different turn than those against other state and federal officials, including former President Donald Trump, who was sued for blocking constituents on his personal Twitter account. In both cases, the account holder used Twitter to make official pronouncements on governmental policy. Trump made numerous announcements on Twitter about policy and other matters, including firing administration officials. Boebert uses her personal account to make announcements about legislation and policy issues. She also has a @repboebert account created for her when she was sworn into Congress last January.

Domenico drew the line between the difference of an executive branch official, who has plenary authority on behalf of the government, and a member of Congress, who has limited power under the Constitution, according to Chris Jackson, an attorney with Holland & Hart in Denver.

Domenico said in his ruling that Boebert did not block Buentello from the official @RepBoebert House account, and Ms. Buentello can fully view the @RepBoebert feed and participate in discussions created by that account’s tweets.

Boebert has blocked at least a half-dozen individuals on her personal Twitter account since taking office in January; several are her constituents in Congressional District 3.

Elected officials, including President Trump, have lost lawsuits for blocking people on Twitter, even when using what's viewed as a personal account. In Colorado, Sen. Ray Scott, a Grand Junction Republican, settled a lawsuit filed by a critic he blocked from his Facebook and Twitter accounts. Senate President Leroy Garcia of Pueblo also settled with a man who was blocked from his Senate President Facebook page. The U.S. Supreme Court dismissed the lawsuit against Trump in April, after the Justice Department called it moot since Trump by then had lost his bid for re-election and was no longer in office.

Buentello told Colorado Politics on Monday that the ruling was disappointing but not surprising. "It should worry everyone who cares about the First Amendment that we have a judge that's willing to make a very partisan ruling."

A decision on an appeal has not been made, she said.

Domenico, a former solicitor general for Colorado from 2006 to 2015, was nominated three times to the U.S. District Court, beginning in September 2017, by then-President Trump. Domenico's nomination failed twice under Senate parliamentary rules in 2017 and 2018. After his third nomination, he was finally confirmed by the Senate in May 2019. 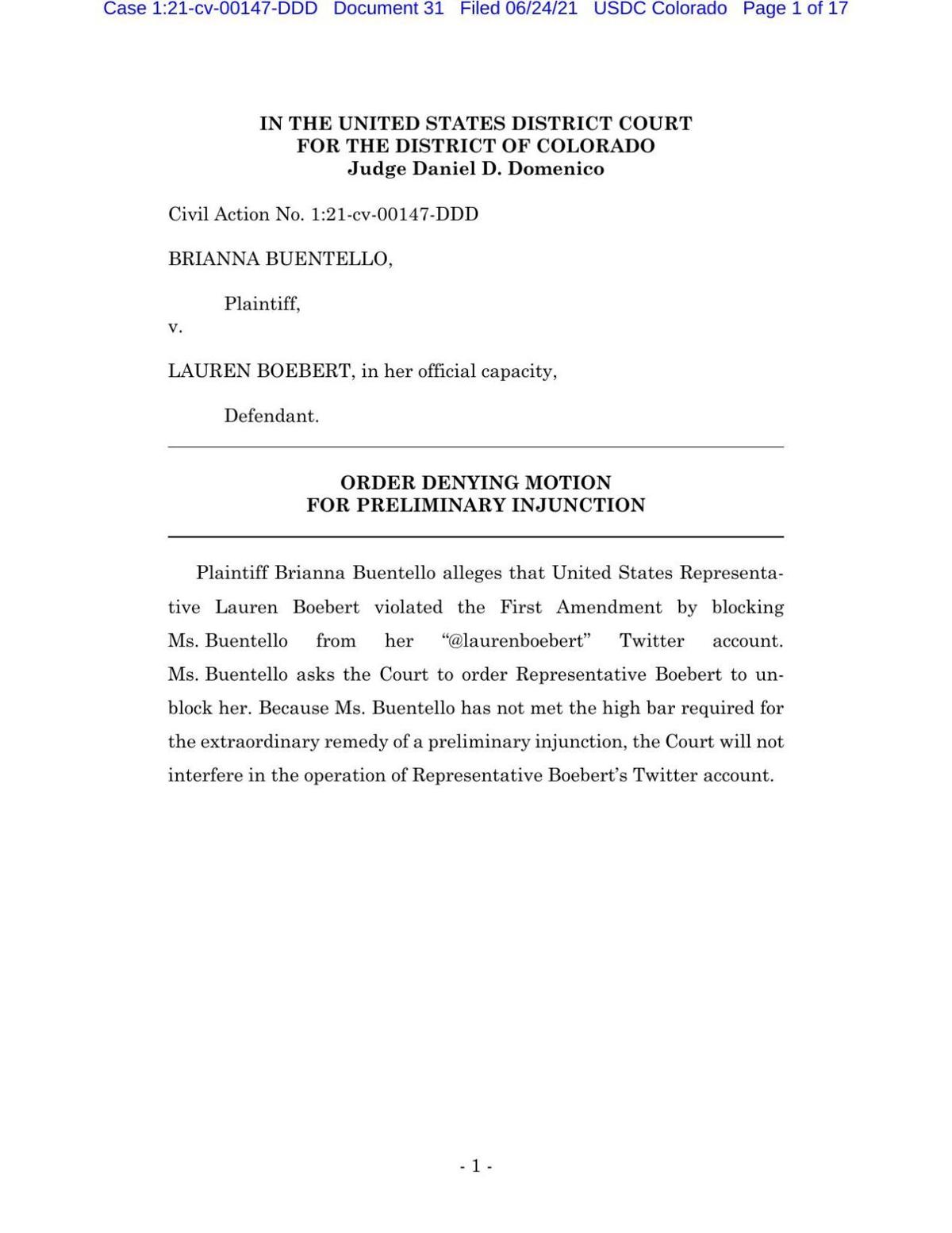 “This is the bill that, as a value statement from the state legislature, says, 'We believe that behavioral health is one of the greatest needs in Colorado and we want to use the one-time funds that we have through the American Rescue Act in a thoughtful way to transform behavioral health,” the governor said of Senate Bill 137.