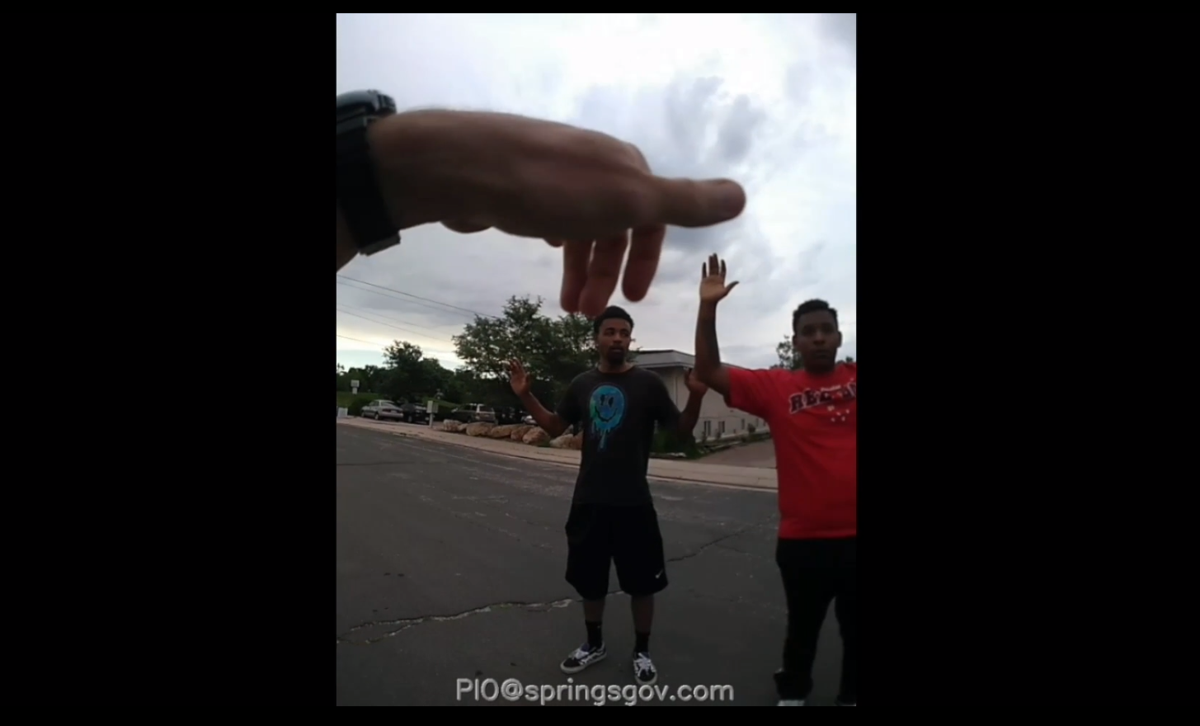 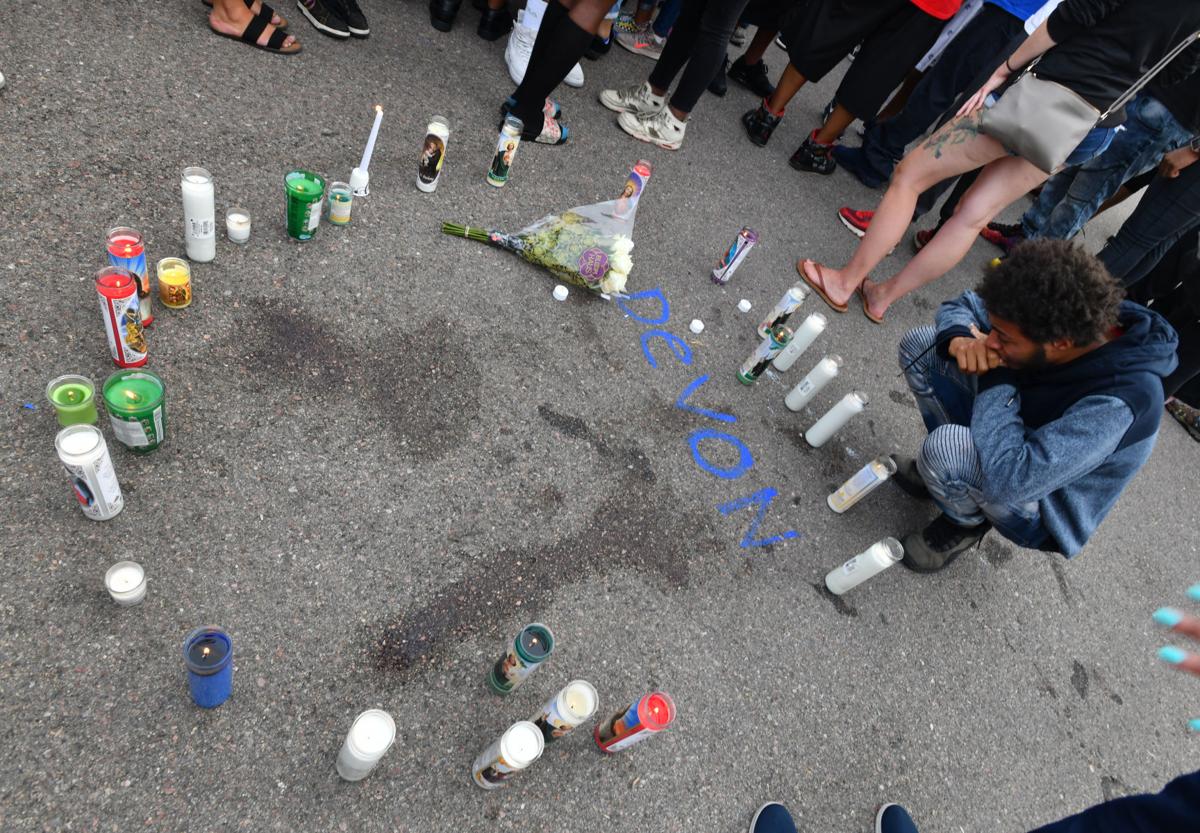 The family and friends and their supporters of De'von Bailey gathered for a prayer and candlelight vigil on Sunday, August 4, 2019, at the spot where he was shot by a member of the CSPD on Saturday evening. (Photo by Jerilee Bennett, The Gazette)

The family and friends and their supporters of De'von Bailey gathered for a prayer and candlelight vigil on Sunday, August 4, 2019, at the spot where he was shot by a member of the CSPD on Saturday evening. (Photo by Jerilee Bennett, The Gazette)

The video shows two officers — Sgt. Alan Van’t Land and Officer Blake Evenson — approach Bailey and order him to put up his hands before shots were fired. Police identified Van't Land as an 11-year veteran of the force, while Evenson has served seven years. Both were assigned to the department's Sand Creek substation at the time of the shooting.

The footage, released 13 days after the fatal shooting, comes earlier than release of such footage in the past. In five instances in which city police used deadly force over the past 18 months, body cam footage was released no earlier than 2½ months after the incident and was coupled with the 4th Judicial District Attorney's Office ruling on whether the shootings were justified.

Nationwide, police have more promptly released video evidence and the names of officers involved. Such was the case earlier this month when an officer in a Dallas suburb killed a woman lying in the grass while he tried to shoot a dog that was charging at him. Authorities released footage from that shooting less than 24 hours after it happened.

The death of Bailey, the fifth person killed by Colorado Springs police this year, angered many in the community and prompted downtown rallies. Crowds demanded justice for Bailey, who witnesses claim was fatally shot in the back after officers fired as many as seven shots.

Two days after the shooting, more than 60 people marched from City Hall to the Police Operations Center, 705 S. Nevada Ave., decrying police brutality and racial discrimination. The rally remained nonviolent until two bail bondsmen brandished their guns at the crowd. Officers handcuffed the bondsmen, twin brothers, while police in riot gear were called to keep the peace with the protesters and eventually disperse them.

Tensions between police and the community escalated later that day after The Gazette released surveillance video, which captures Bailey’s final moments as he flees from police. In the video, Bailey runs four or five steps into the camera’s view before he tumbles to the ground. Two officers walk to him from the same direction with their weapons drawn.

Officers, who were responding to a reported armed robbery nearby, said they shot Bailey after he reached for a firearm, according to the El Paso County Sheriff’s Office, which is investigating the case. Additional details were not released, citing an ongoing investigation.

Experts who watched the surveillance video for The Gazette were torn as to whether the shooting appeared to be justified.

John Burton, a 40-year lawyer and former board president of the National Police Accountability Project, said Bailey would have to be using or threatening to use a weapon — which he did not see on the surveillance video — in order for officers to justifiably shoot.

Adam Bercovici, a former 30-year police officer in Los Angeles, disagreed, saying police could be justified in shooting Bailey even if he didn’t have a gun. If he had committed an armed crime, the suspect could be justifiably shot to prevent him from escaping into the community, he said.

Lawrence Stoker, who was questioned with Bailey, said he didn’t know his cousin had a gun until it fell out of the pocket of his basketball shorts as he lay motionless in the street after being shot. Three witnesses who spoke with The Gazette said they did not see Bailey reach for his gun before police opened fire.

An archive of police dispatch, however, shows that police believed Bailey to be armed before they approached him on the street.

The Colorado Springs and El Paso County tradition — having one local law enforcement agency investigate the other — also fell under scrutiny. Some questioned if the Sheriff’s Office could be impartial in its investigation when its undersheriff is former Police Chief Pete Carey, who served more than 30 years with CSPD.

The concern prompted a news conference Tuesday in front of police headquarters, in which Bailey’s family, their attorneys and prominent members of the black community demanded a transparent and independent investigation.

Darold W. Killmer, one of the family's attorneys, urged the city to ask Colorado Attorney General Phil Weiser to lead the investigation, with the help of a grand jury.

Mayor John Suthers rebuffed the request, saying it would be “inappropriate and evidence of a lack of trust in the agencies down here that I don’t have.”

Police, in a news release accompanying the videos Thursday, cited Colorado laws that could justify the shooting. One law allows officers to use deadly force to apprehend someone who "has committed or attempted to commit a felony involving the use or threatened use of a deadly weapon."

Thursday, Killmer issued a statement claiming the video proves that police had no reason to shoot Bailey.

"The video evidence released today demonstrates that De’Von was not presenting any threat to the officers who shot and killed him while he attempted to flee," the lawyer said. "In addition, there is not a shred of evidence that De’Von presented an imminent threat or risk that he was imminently about to use a gun to harm anyone else."

The DA's Office has not ruled on whether the shooting was justified.

Standing behind a clear podium, De’Von Bailey’s family and their attorneys, along with prominent members of the black community, on Tuesday de…