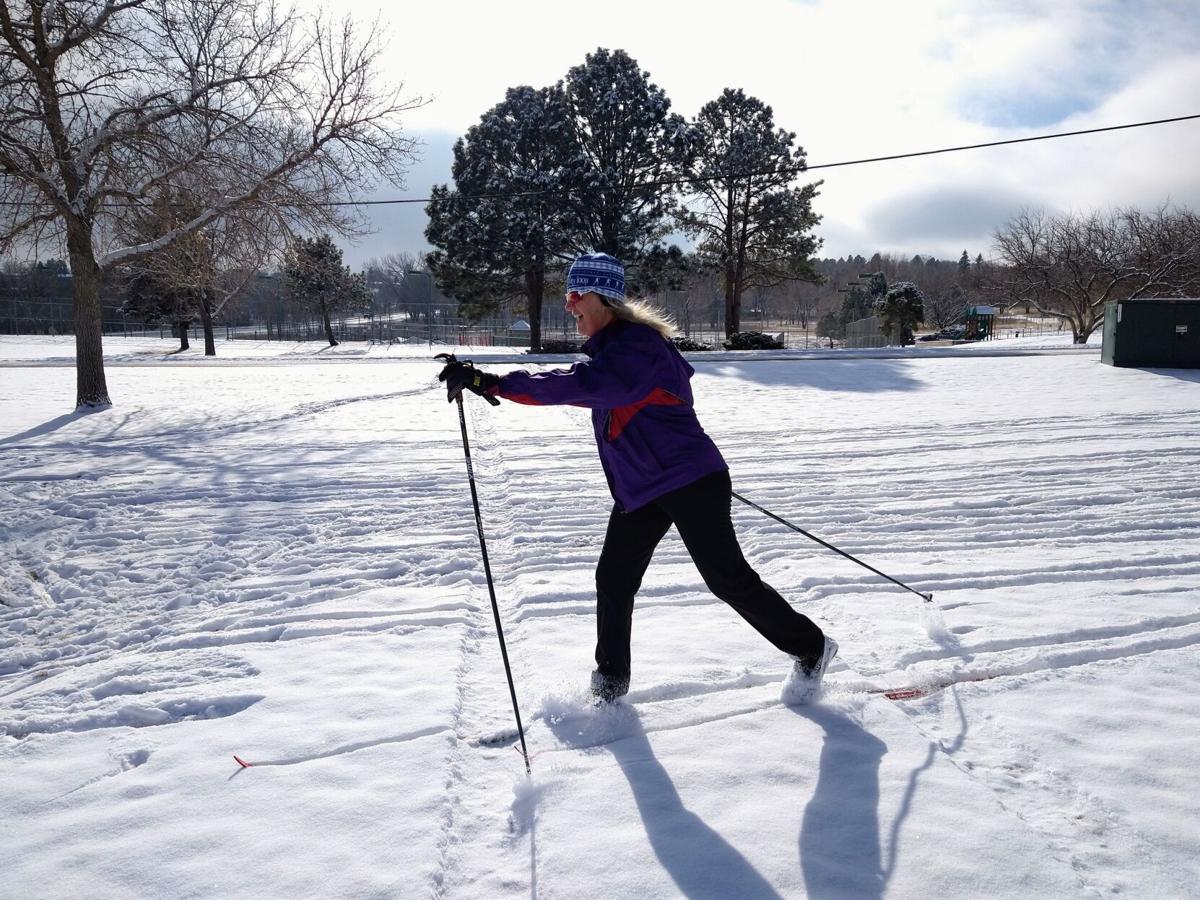 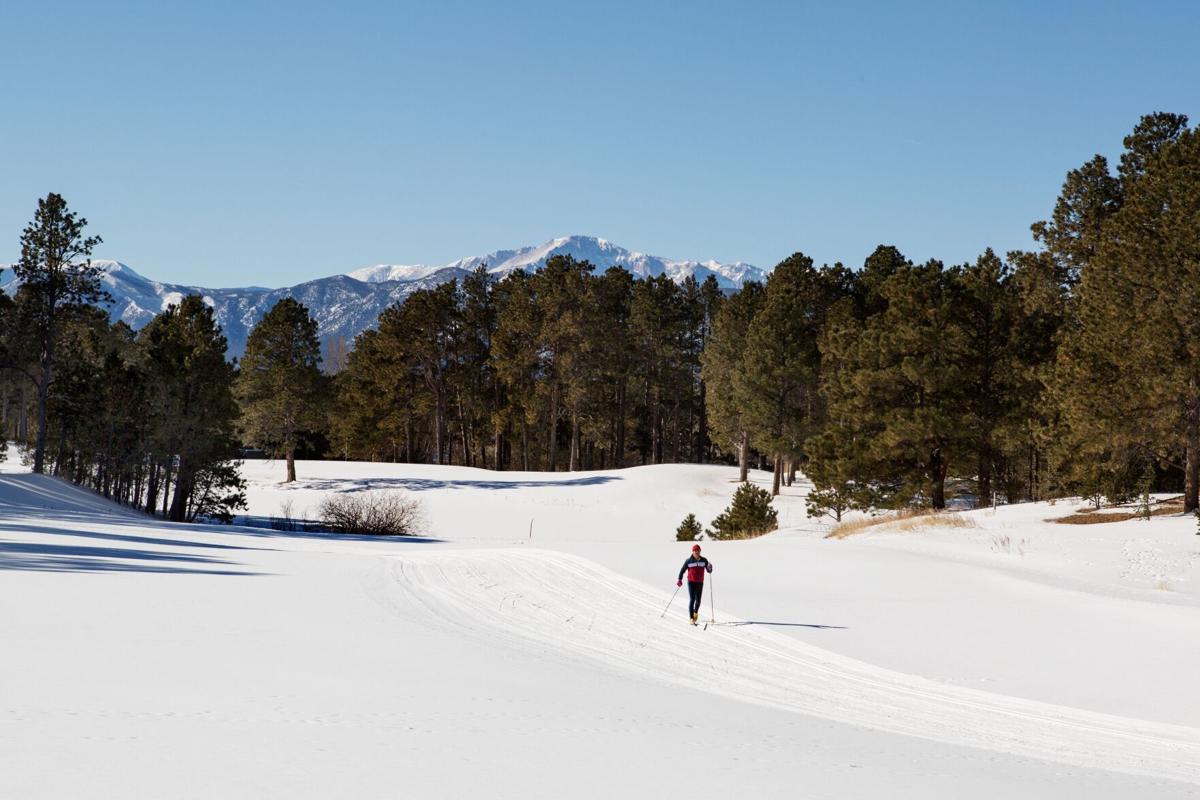 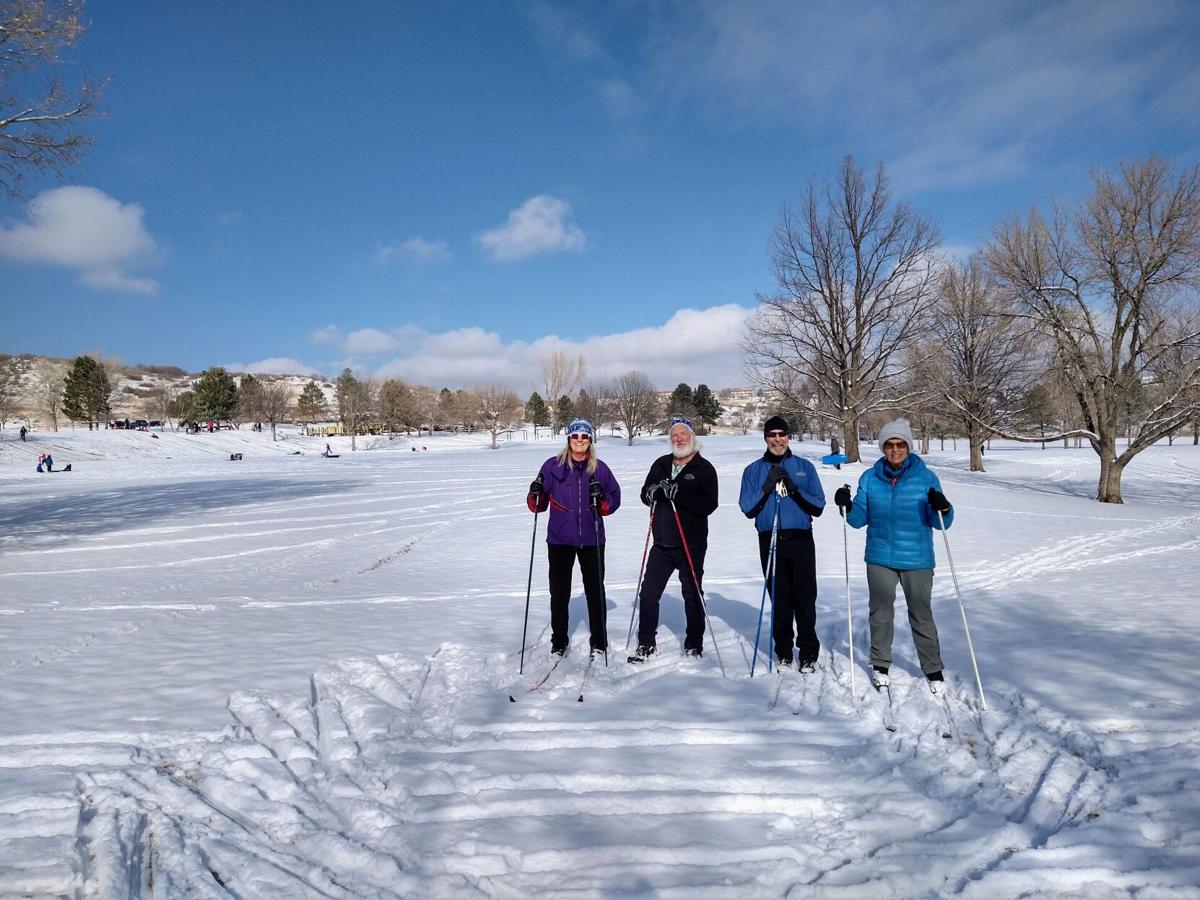 Friends (from left) Anne Ojennes, John Ojennes, Cliff Hammer and Randi Hammer got together to cross-country ski at Bear Regional Creek Park Jan. 10. The Hammers, who live in the Cheyenne area of Colorado Springs, just got back into cross-country skiing after a 40-year hiatus. 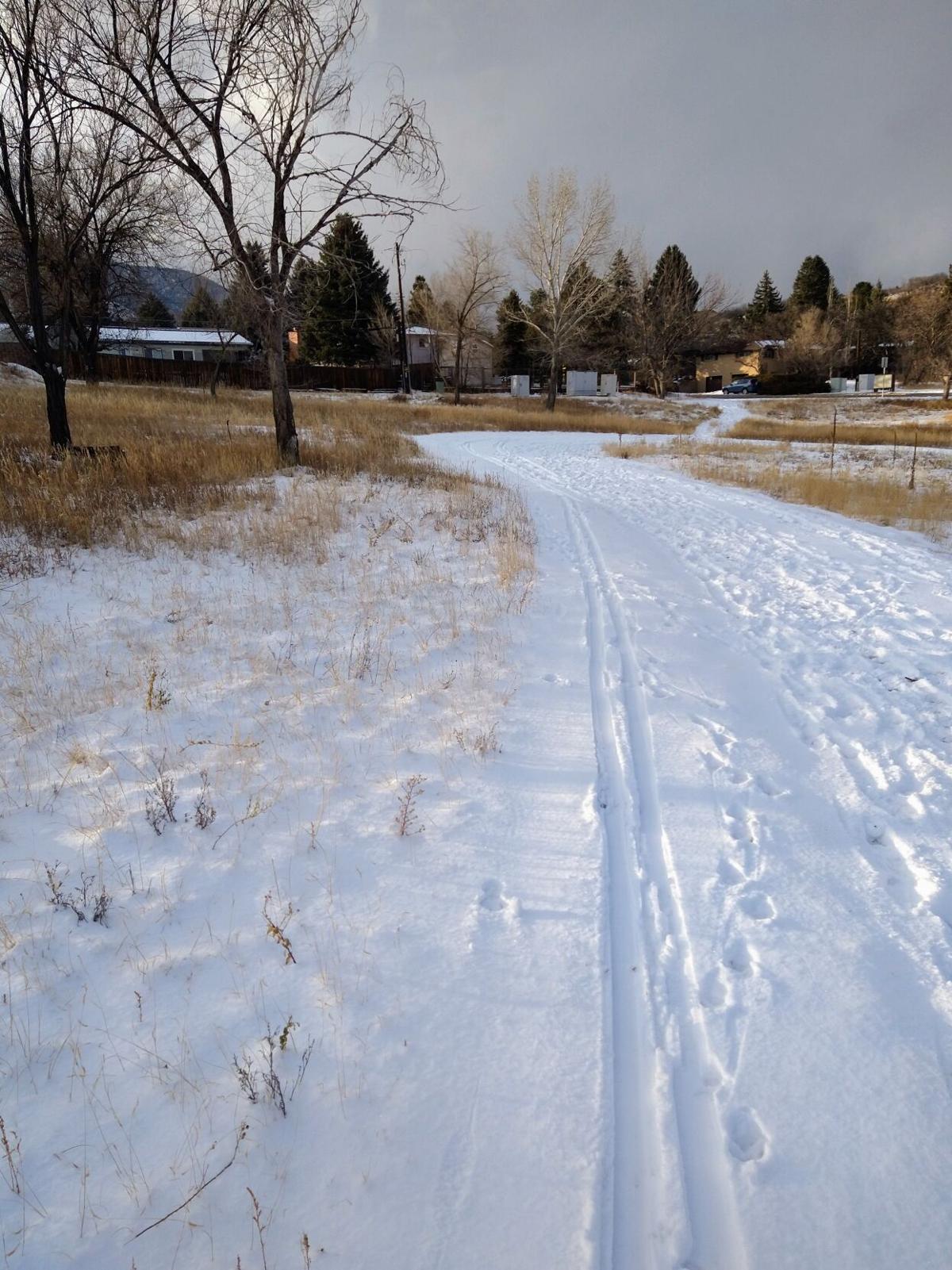 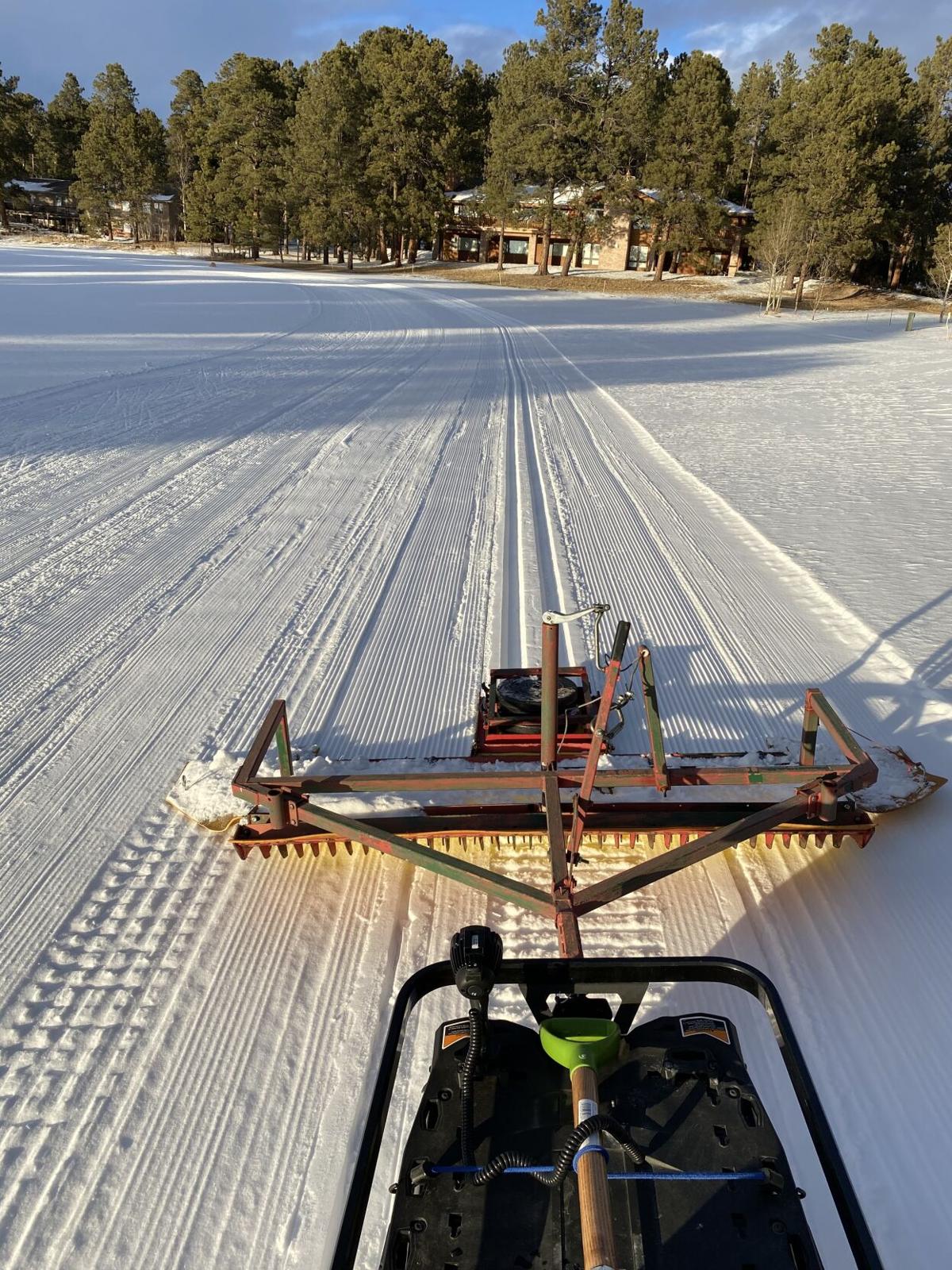 Friends (from left) Anne Ojennes, John Ojennes, Cliff Hammer and Randi Hammer got together to cross-country ski at Bear Regional Creek Park Jan. 10. The Hammers, who live in the Cheyenne area of Colorado Springs, just got back into cross-country skiing after a 40-year hiatus.

If you’re itching to ski but don’t want to drive to the mountains, cross-country skiing on a local trail may be your answer when the weather cooperates.

“For me, it gives me something I can do that’s equivalent to getting out there and jogging. It just gives me endorphins, happiness, stress relief — all of that,” Wetzel said.

When there’s snow cover, you can cross-county ski grassy school yards, golf courses, closed roads or trails, Wetzel said. She recommends about four inches of snow, but snow on grass is more forgiving than on hard surfaces.

Westside Colorado Springs resident Anne Ojennes, who’s been cross-country skiing since college, skis a grassy field below the Bear Creek Regional Park “sledding hill” in even just an inch of snow. She encourages people to give cross-country skiing a try — it’s easier than you’d think, she says.

Conditions change fast and vary greatly in the Pikes Peak Region, so Wetzel recommends skiing soon after a snowstorm before the snow melts. If you’re brand new to cross-country skiing — also known as classic skiing — she suggests you take a lesson or a class like the one CMC offers.

“The simplest, if you have no equipment, is go up to a Nordic center and take a lesson. Then you’re set for a long time,” Wetzel said.

“The biggest challenge is always the weather. While the Front Range does get its fair share of snow, we don’t get anywhere near the same amount as the mountain resorts. With 300-plus days of sunshine a year, the snow we do get can disappear pretty quickly,” said Brothers, who posts updates on changing trail conditions on the public Woodmoor Nordic Facebook group.

During the pandemic, finding gear to buy has been a challenge because more people are cross-country skiing, Wetzel said. If you can find skis, she recommends a metal-edged ski with an NNN-BC binding and a compatible soft boot. That’s the setup she uses on local tails.

According to Brothers, Ojennes and Wetzel, cross-country skiing has many benefits: the affordability compared to downhill skiing; the ease of learning it; the lack of crowds; the ability to ski nearby trails when there’s enough snow; the whole-body workout; and the fact that it’s low-impact and accessible to all ages.

If you’re on the fence about trying cross-country skiing, Wetzel urges you to go for it.

“Just do it. That’s my motto. If it’s cold and you don’t want to get up, just do it,” she said. “You will not regret it afterward.”

For Ojennes, cross-country skiing tops everything.

“To me there is nothing more delightful than that perfect kick and glide where you’re just motoring along under your own power,” she said. “Your arms are going and your legs are going. To me, that’s the best feeling in the world.”