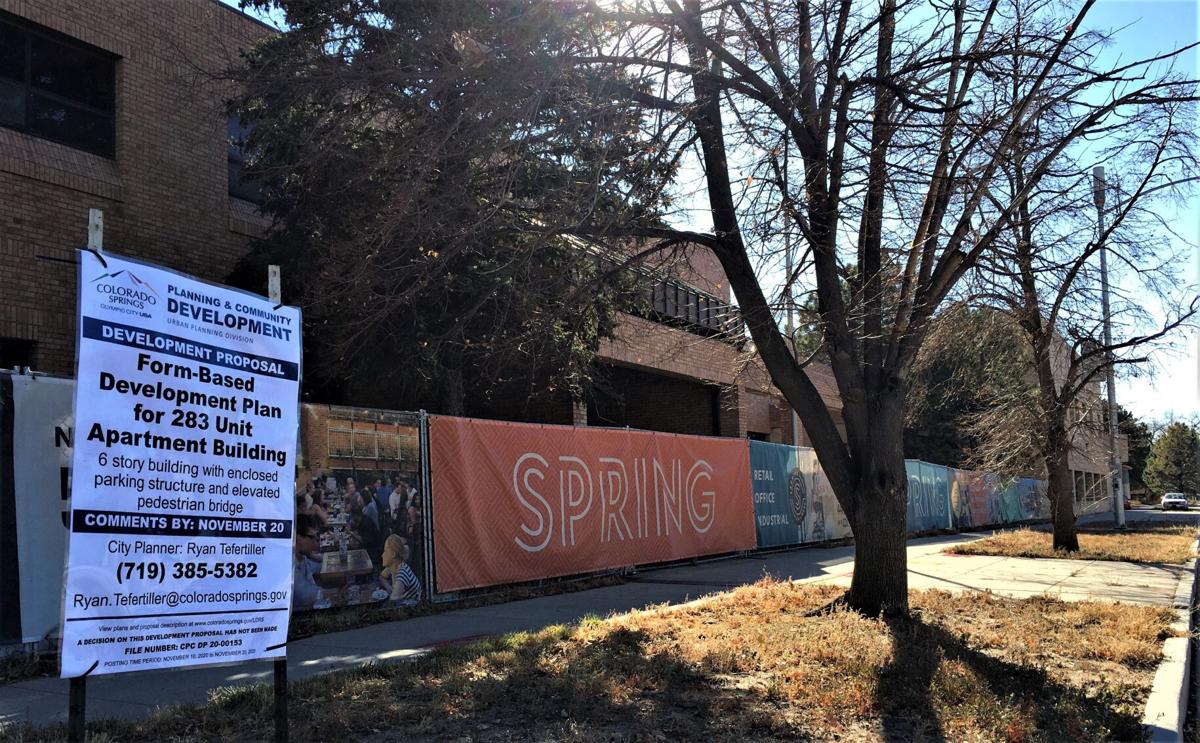 Two former Salvation Army buildings in the 500 block of South Weber Street in downtown Colorado Springs would be demolished as part of a proposal to build a five-story, apartment building on the site.

An old Elks Lodge building at 329 E. Cimarron St., left, and two former Salvation Army buildings in the 500 block of South Weber Street, in background, would be torn down as part of a proposal by Greystar Real Estate Partners of Charleston, S.C., to develop a 282-unit apartment building and 325-space parking garage on downtown Colorado Springs’ south side. 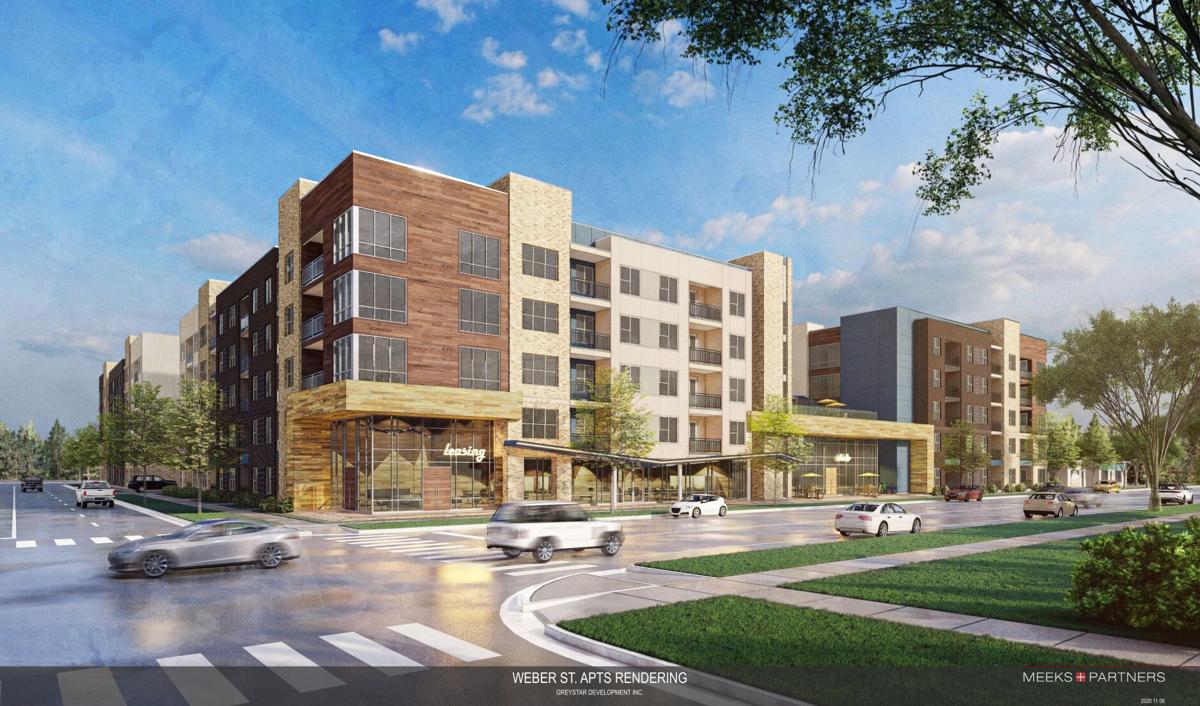 Two former Salvation Army buildings in the 500 block of South Weber Street in downtown Colorado Springs would be demolished as part of a proposal to build a five-story, apartment building on the site.

An old Elks Lodge building at 329 E. Cimarron St., left, and two former Salvation Army buildings in the 500 block of South Weber Street, in background, would be torn down as part of a proposal by Greystar Real Estate Partners of Charleston, S.C., to develop a 282-unit apartment building and 325-space parking garage on downtown Colorado Springs’ south side.

One of the nation’s largest multifamily developers is doubling down on its plans for downtown Colorado Springs.

Greystar Real Estate Partners of Charleston, S.C., has proposed a five-story, 282-unit apartment building southeast of Cimarron and Weber streets on downtown’s south side, according to documents it’s submitted to city officials.

The project follows the company’s proposal in June to construct a six-story, 320-unit apartment building northeast of Pikes Peak and Wahsatch avenues on downtown’s east edge.

Greystar’s downtown investments come at a time when the area is seeing a flurry of new apartments and hotels and signals developers’ continued confidence in Colorado Springs.

“We talk to a lot of developers, who talk about their interest in the market and their interest in doing multiple projects, which we love,” said Alex Armani-Munn, economic development specialist for the Downtown Partnership advocacy group. “But to see two such significant investments, significant developments, developments so close to each other, really back-to-back, I think that quick succession is really a testament to just how bullish Greystar is on the market.”

Greystar officials said downtown Colorado Springs is attractive because of the city’s overall quality of life and its U.S. News & World Report ranking as one of the nation’s most desirable places to live. Other factors that make the Springs appealing include its diverse economy, cultural and recreational opportunities, military installations and higher education institutions, the company said.

“Employment growth, wage growth and rent growth have outpaced national averages in recent years, all while offering a lower cost of living,” Greystar said of Colorado Springs. “The current supply of high-quality residences in the urban core does not meet the demand of a growing population of motivated, outdoor enthusiasts seeking the lifestyle Colorado Springs and the Weber/Cimarron apartments will have to offer.”

Greystar also said it was attracted by financial incentives available in downtown. State officials have designated downtown as a federal opportunity zone, which offers tax breaks to investors who fund projects inside the zone’s boundaries, and Greystar plans to take advantage of the incentive, the company said.

“As we’ve watched the downtown core blossom in recent years, we think of the (opportunity zone) benefit as one of many catalytic drivers which will further propel downtown Colorado Springs into a world class live/work/play city,” the company said.

Also, Greystar has applied for funding from the Downtown Development Authority for its apartment projects. The authority, a quasi-governmental agency, promotes downtown’s physical and economic growth and is funded, in part, by increased property tax revenue generated by new construction and redevelopment in the area.

The authority uses that money to support downtown projects, and has agreed to earmark future property tax revenue to help Greystar finance its apartment buildings, said Susan Edmondson, president and CEO of the Downtown Partnership.

“Without this program and the collaborative efforts of the (authority), City Council, Office of Economic Development, Planning Department and the people of Colorado Springs, it is unlikely that this project would have kicked off this year,” Greystar said.

Greystar’s newest project calls for demolishing two former Salvation Army buildings in the 500 block of South Weber and razing the old Elks Lodge building in the 300 block of East Cimarron.

The company’s apartment project would extend along Weber, Cimarron and Wahsatch and feature a mix of studio, one- and two-bedroom units ranging from 480 square feet to 1,506 square feet. Apartments would rent for market-rate prices; in the third quarter, Colorado Springs rents averaged nearly $1,280 a month, a new report shows.

Amenities would include a clubhouse, state-of-the-art fitness center, pool and courtyard. Greystar also would construct a six-story, 325-space parking garage as part of the project; the garage would connect to apartments running along Weber via three pedestrian bridges.

The company expects to start construction in mid-2021 and open its first units in early to mid 2023.

Greystar says it’s contracted to buy the Cimarron-and-Weber site from a local investment group that includes CameronButcher Commercial Real Estate in Colorado Springs. The group had purchased the Salvation Army and Elk Lodge buildings in 2018 and had planned to redevelop the property into a mixed-use project.

The Pikes Peak and Wahsatch project would raze a vacant U.S Bank building and drive-thru and demolish a building to the east that houses the Pikes Peak Post 4051 Veterans of Foreign Wars. Its timetable calls for construction to start next year and the first units to be delivered in 2023; Greystar also has contracted to purchase those properties.

Greystar, founded in 1993, manages and operates more than $200 billion in real estate in nearly 200 markets around the world, according to its website.

It has an office in Denver as part of its global operations.

The company ranked No. 1 in the nation for 2020 with almost 493,000 units managed, according to the National Multifamily Housing Council, an industry trade group. Greystar also ranked No. 2 last year with just over 7,000 units started.

Greystar’s projects are the latest for downtown Colorado Springs, where Blue Dot Place, Casa Mundi, ECO 333 and The Mae on Cascade have combined to add about 400 units in the area in recent years.

A five-story, 282-unit apartment project is planned for the southeast corner of Cimarron and Weber streets on the south edge of downtown Color…

The pace of Colorado Springs-area homebuilding has climbed to a level not seen since before the Great Recession and shows no signs of slowing,…