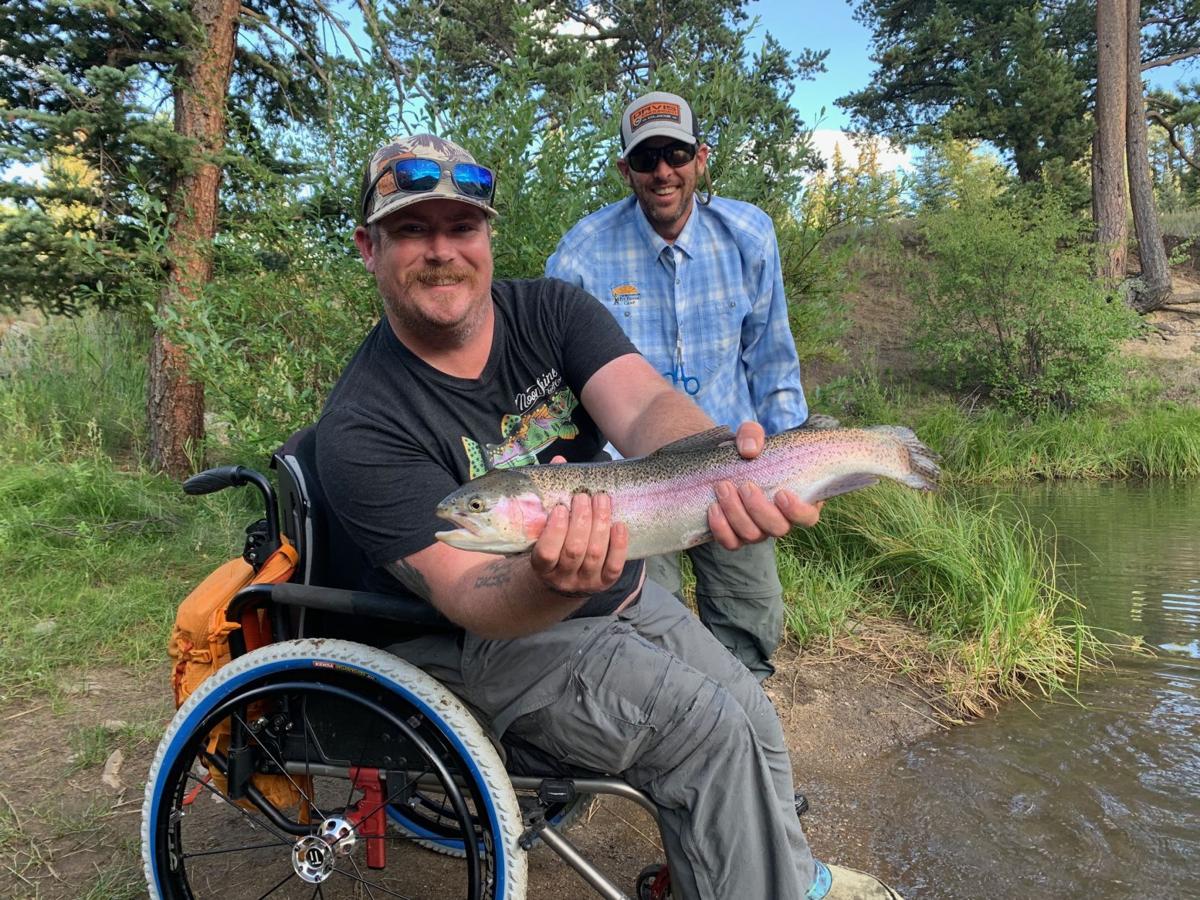 Navy veteran Christian Kloberdanz poses with a rainbow trout he caught on a hopper pattern under the direction of Broadmoor Fly Fishing Camp guide Ted Demetriou. 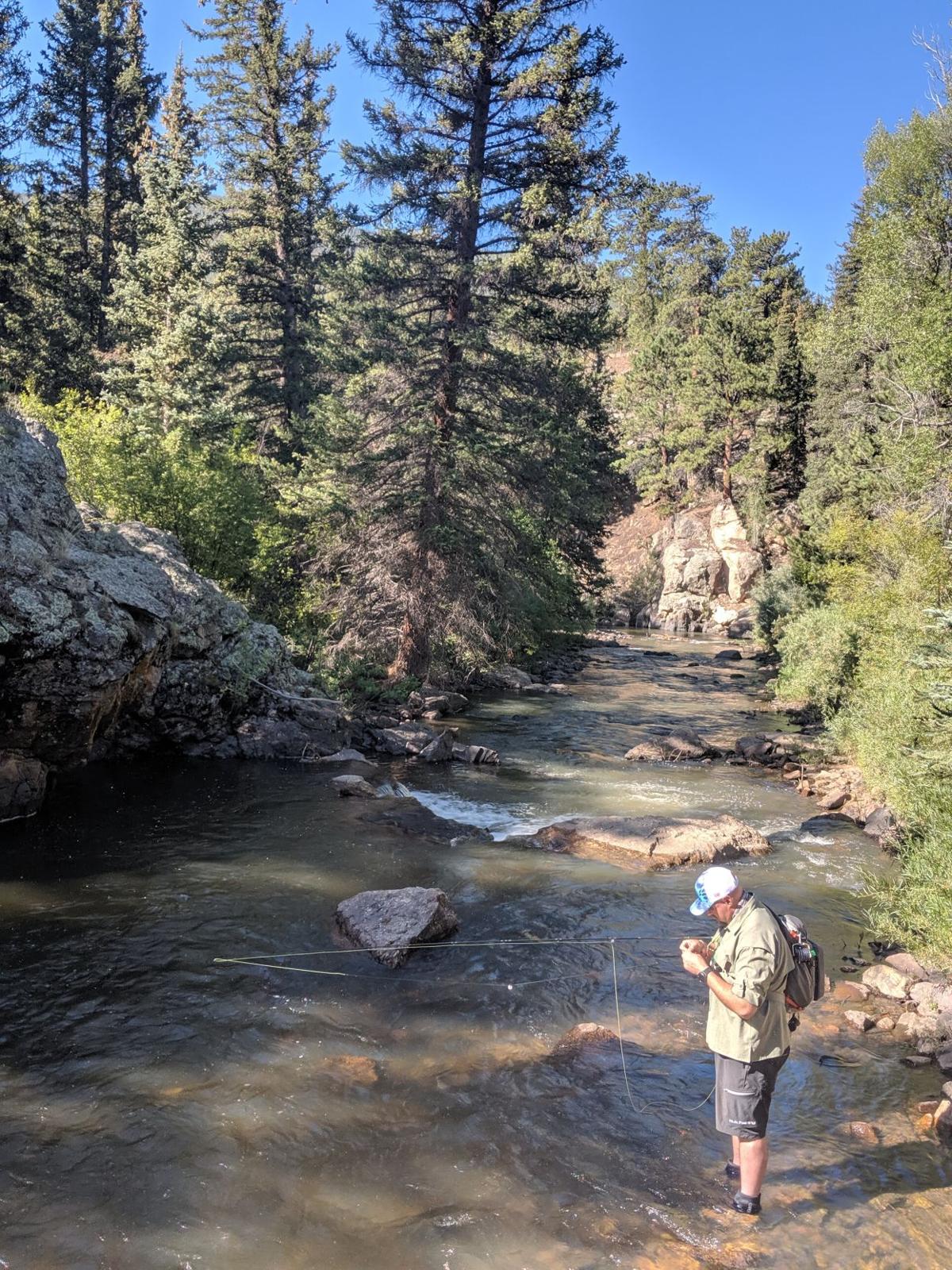 Navy veteran Christian Kloberdanz poses with a rainbow trout he caught on a hopper pattern under the direction of Broadmoor Fly Fishing Camp guide Ted Demetriou.

TARRYALL CREEK — We’re fishing the soft water below Worm Hole, one of the well-known runs on the Broadmoor Fly Fishing Camp’s 5 miles of heavenly trout habitat. It’s stuffed with fish. They all are.

I’m in search of the best story at the third Broadmoor Invitational — a fundraiser for Project Healing Waters, the powerful nonprofit that joins disabled military with the godliest of sports, fly fishing — and stumble on one of the best fly casters I’ve ever seen. He’s a Navy vet named Christian Kloberdanz, a Grand Junction guy. The TFO 5-weight attached to his right arm is looping casts that flutter onto the stream with grace, like the final leap of a skipped rock.

“He casts better than my (fishing) guides,” Fish Camp guide director Randy Babas whispers to me, just loud enough for his guides to hear.

A dozen casts in, Kloberdanz hooks a lively 16-inch Rainbow trout. “Fish on!” he says.

Therapy is in session.

“There are five words I hear most often: ‘This program saved my life,’” says Project Healing Waters CEO Todd Desgrosseilliers.

Almost 15 years after it was conceived, Project Healing Waters is up to 8,300 active and retired military diagnosed with a disability and 4,000 volunteers diagnosed with a full heart. The nonprofit organization serves those who served with a truth fishermen have known for centuries: Take someone fishing, you’ll both be better for it.

Colorado being an international hub for both U.S. military and fly fishing, it makes sense the two largest PHW programs in the country are in Denver and Colorado Springs. They show over 600 participants and 200 volunteers, one not possible without the other. This week 12 participants from the Air Force, Army, Navy and Marine Corps were invited to overnight at and fish the Broadmoor Fly Fishing Camp, a dream destination for anyone who dreams of 20-inch trout rising to thick, floaty, foam hoppers.

“You hear a lot of fly fishermen say, ‘For me, it’s therapy,’” says retired Air Force Gen. Gene Renuart, who last served as commander at North American Aerospace Defense Command (NORAD). “So imagine what fly fishing is like for a Vietnam veteran who’s been carrying around a certain weight for 50 years.”

Before lending his leadership to PHW along the Front Range, Gen. Renuart’s experience in fly fishing was limited. He says he became involved after seeing the healing power of the sport and its positive influence on those who served.

“So many of our veterans today, we’re just learning about the emotional and mental toll that certain circumstances have on them,” says Renuart, retired as a four-star Air Force general.

The third Broadmoor Invitational was made possible through presenting sponsor The El Pomar Foundation, program sponsor Jeppesen, major donors like the Anschutz Corporation and good folks like you (projecthealingwaters.org). Roughly $300 supports one participant for the year and helps active military and veterans engage in five program activities: fly fishing, fly tying, rod building, casting and fishing education. When participants build a fly rod, for example, Orvis provides a reel equipped with fly line and backing. The longest-lasting impact comes in the comfort of shared experiences.

“In my case, I suffer from vertigo,” says Desgrosseilliers, who was “blown up” on deployment in Iraq, joined PHW as a participant in 2015, witnessed its positive impact and now heads the organization. “You have trouble focusing. Sitting down with nine or 10 people to tie flies — which forces you to focus, with people who understand what you’re going through — can change or save your life.

“Healing doesn’t occur in the past,” he says. “It occurs in the present and the future.”

It helps, too, that trout don’t live in ugly places. Tossing a nymph rig into the COD Hole (Cash on Delivery, ahem), Army veteran Nate Rudolph marvels at the spectacular canyon setting at Broadmoor Fly Fishing Camp. He says PHW has “given me the chance to keep serving” in two years as a volunteer, all while battling PTSD after deployments to Bosnia and Kosovo.

“This is something we’ve looked forward to since the first year,” says Mark Pennington, one of the half-dozen Broadmoor fishing guides who requested they work the event a third time.

Upstream, under bluebird skies, Kloberdanz continues a casting clinic so impressive you can’t believe it’s performed from a wheelchair. The Grand Junction native enlisted in the Navy after 9/11 and served five years in active duty, three as a reserve.

Another rainbow rises to his foam hopper pattern, he quickly sets the hook... and laughs as the trout wins this encounter.