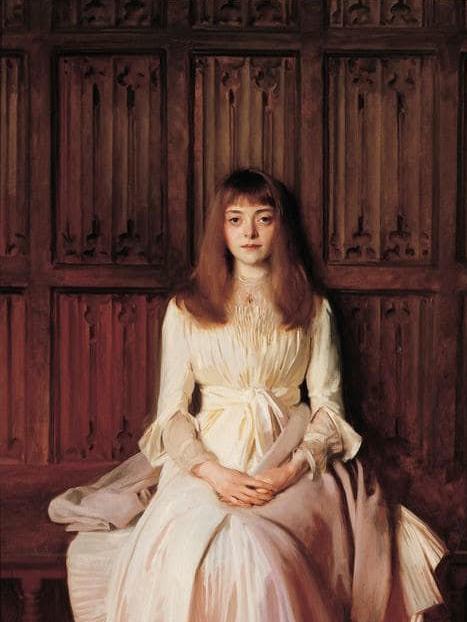 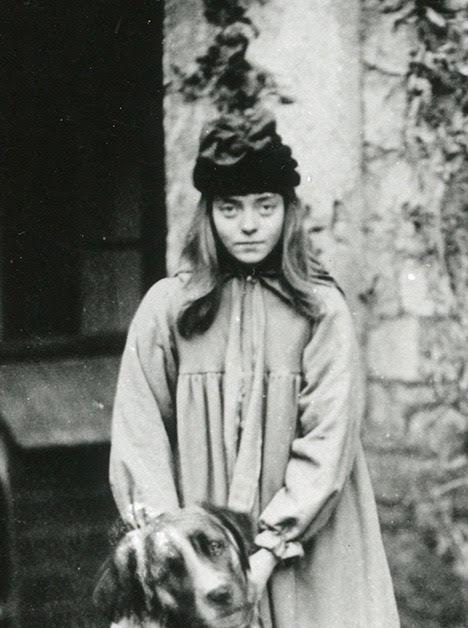 Photograph taken of Elsie Palmer and her dog, Kelpie, in a courtyard at Ightham Mote in 1889. Note the remarkable likeness to her portrait.

Photograph taken of Elsie Palmer and her dog, Kelpie, in a courtyard at Ightham Mote in 1889. Note the remarkable likeness to her portrait.

Many in Colorado Springs are familiar with the iconic painting of Elsie Palmer, daughter of Colorado Springs founding father, Gen. William Jackson Palmer. But what is the story behind her portrait, and how did it manage to make its way back to her hometown?

Elsie spent most of her young girlhood at Glen Eyrie, her father’s estate in Colorado Springs. Due to the delicate health of her mother, Queen, Elsie along with her two younger sisters, went to live in England with their mother. There, Elsie spent her teenage years living in a picturesque and antiquated manor house, Ightham Mote, the setting of her portrait.

During the later part of the 19th century, John Singer Sargent developed increasing fame as a portraitist of the Gilded Age. Patronage by the likes of art collector, Isabella Stewart Gardner, and architect, Stanford White, ensured his high demand by the privileged to document their presence in a certain place and time during their opulent lives. Sargent became a close friend of Queen Palmer, and in early 1889 she commissioned him to paint a portrait of Elsie.

The subject had just turned 17 at the time the painting was started, and it took almost a year to complete. Obviously Sargent struggled to find just the right manner and mood in which to portray Elsie. According to Sargent, he painted what he saw, but was a perfectionist all the same.

Elsie posed in a chapel at Ightham Mote, seated on a low bench with her modest, yet elegant, pale gown spread around her. Her wide-eyed gaze is directed straight ahead, as her hands rest quietly in her lap. A toe of one silk slipper peeps out from the folds of her skirt. The guess is that here is someone on the cusp of womanhood, not quite ready to let go of her girlishness. Her chopped bangs, and flowing hair belie her age, as late teens would have been a time for a young woman to start wearing her hair up. One wonders if this was a common expression for Elsie Palmer, a bit melancholy, individual, forthright, with a bit of upturn to her lips. The guess is that Sargent got it right: his subject was not be be pigeonholed as merely the emerging heiress that she was, but someone living an unconventional lifestyle.

The completed portrait was exhibited at New Gallery in London in spring of 1891. Queen Palmer died from heart failure in 1894. Elsie then lived at Glen Eyrie for many years, eventually returning to England to live until her death in 1955.

Lauren Tyson, special events coordinator with the Fine Arts Center, provided the following information about the provenance (record of ownership) of Elsie’s portrait.

“Elsie married Leopold Hamilton Myers in 1908, and later acquired her portrait upon the death of her father, Gen. William Jackson Palmer. The family owned the painting until the 1920s when it was sold to M. Knoedler & Co. of New York. It was purchased by a family friend Col. Charles Clifton, and later he gave it to Albright-Knox Gallery of Buffalo, N.Y. The portrait remained in New York until 1969 when the Colorado Springs Fine Arts Center, with funds collected through public subscriptions and the Debutante Ball Purchase Fund, came to own it.”

It would certainly be interesting to know why Elsie Palmer and her family sold the painting. Perhaps they wanted it to be shared with future generations of the public. Did they have an inkling of the worth of the portrait especially as a piece of Colorado history? Is it possible that it reminded them of too much sadness related to the deaths of Queen and the general?

Elsie Palmer’s portrait is part of an exhibit highlighting her life through diary quotations, furnishings, photos, and other Palmer family memorabilia. “P.S. I Love You: A Portrait of Miss Elsie Palmer” will be at the Fine Arts Center until March 17.