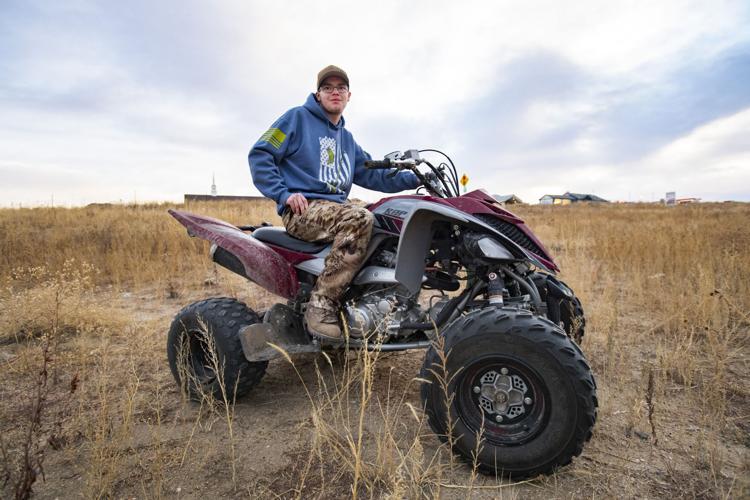 Dylan Tapley, 19, sits on his 2020 Yamaha Raptor 700 ATV in the open space behind his family’s northeastern Colorado Springs apartment on Nov. 30. Tapley, who was diagnosed with acute lymphoblastic leukemia, received the ATV as a gift from the Make-A-Wish Foundation last year. It was stolen in January and later found in Florida before being returned to the Springs. 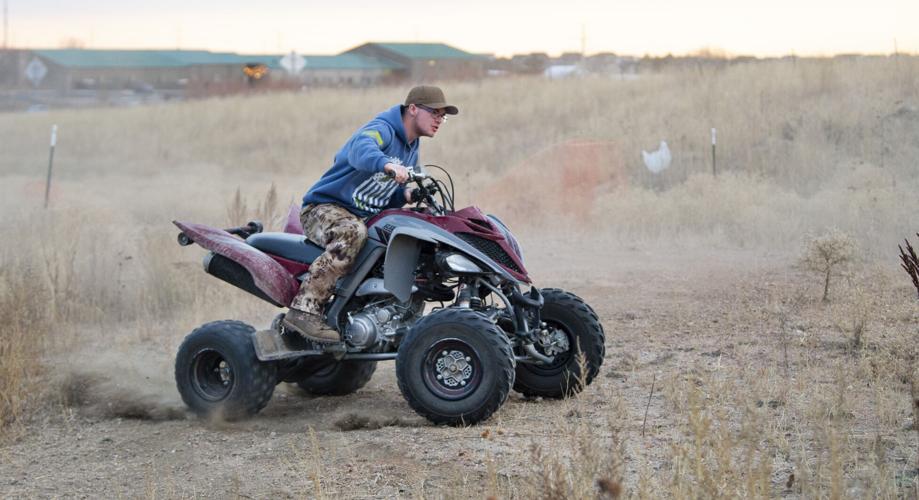 Dylan Tapley, 19, rides his 2020 Yamaha Raptor 700 ATV in the open space behind his family’s northeastern Colorado Springs apartment on Nov. 30.

Dylan Tapley, 19, sits on his 2020 Yamaha Raptor 700 ATV in the open space behind his family’s northeastern Colorado Springs apartment on Nov. 30. Tapley, who was diagnosed with acute lymphoblastic leukemia, received the ATV as a gift from the Make-A-Wish Foundation last year. It was stolen in January and later found in Florida before being returned to the Springs.

Dylan Tapley, 19, rides his 2020 Yamaha Raptor 700 ATV in the open space behind his family’s northeastern Colorado Springs apartment on Nov. 30.

When Dylan Tapley’s new all-terrain vehicle was stolen last January, he and his mother, Shay Bryan, were sure they would never see it again.

“We talked to the police, and they said they’d investigate,” Bryan said. “But we just assumed it was gone.”

Tapley, who was diagnosed with acute lymphoblastic leukemia two years ago, received the 2020 Yamaha Raptor 700 ATV as a gift from the Make-A-Wish Foundation, a nonprofit organization that fulfills the wishes of critically ill children and teens. According to his mother, he had the bike for about two months before it was stolen.

Ten or so months later, just in time for the holidays, the family received its Make-A-Wish gift back. All told, the vehicle had traveled about 4,000 miles, had been involved in a crash, was taken apart and reassembled and spent six months in an impound lot.

The story of the ATV’s long, strange trip involves theft, self-recrimination, frustration and near hopelessness. But it is also a tale of empathy and generosity.

One night in January, hampered by limited garage space at the Copper Range Apartments in northeast Colorado Springs, Bryan set the brake on the ATV and parked it outside her apartment.

“It was right outside Dylan’s window, and it was just for one night,” she said.

The next morning, Tapley’s Make-A-Wish gift, the four-wheeler he rode to take his mind off his illness, was gone.

“It was the one thing that made him happy,” Bryan said.

The theft was a huge blow to Tapley, according to his mother.

“He wasn’t doing well with his chemotherapy at the time,” Bryan said. “So this was a huge setback.”

The family reported the theft to Colorado Springs police, but any hopes of getting the ATV back dwindled with each passing month. They had pretty much given up hope when Bryan got a phone call in late June.

“It was the Miami Police Department, telling me that the four-wheeler was in Florida,” Bryan said. “I was like, ‘Florida? Are you kidding me?’ ”

The four-wheeler had been found in the back of a truck that had been involved in a hit-and-run crash in February. Because the vehicle identification number had been stripped off, Miami investigators couldn’t trace the bike’s origin.

As a result, the ATV spent months in an impound lot before an employee set in motion a chain of events that would eventually lead the bike back to its rightful owner.

“One of the workers thought something looked weird with the body, so he took it apart, and found the VIN etched someplace else on the four-wheeler,” Bryan said. “When they looked it up, they found that it was stolen, and that’s when they called me.”

At first, Bryan took little solace in the fact that the bike had been found. For starters, it was 2,000 miles away. To further complicate matters, the impound lot wanted nearly $3,000 in fees to release the vehicle — a total that increased by $14 each day. As far as Bryan was concerned, they were no closer to getting the bike back.

At her wit’s end, Bryan contacted the Colorado chapter of Make-A-Wish to see if there was anything they could do to help.

“I mean, I would have either had to drive down there, pay $3,000 and haul the bike back or fly to Miami and rent a vehicle to bring it here,” she said. “I didn’t have any way to do that.”

The situation got the attention of Scott Dishong, CEO of Make-A-Wish Colorado.

“I reached out to the impound lot on her behalf,” Dishong said. “As soon as they heard it was a Make-A-Wish kid, they said they would waive all the fees.”

Bryan added, “As it turned out, the owner of the towing company is a 3-year cancer survivor. When he heard Dylan’s story, he had a change of heart and wiped out all the charges.”

Next was the matter of transporting the vehicle back to Colorado Springs. It took an interstate, interagency partnership to finally make it happen, Dishong said.

Staff members from Make-A-Wish South Florida helped facilitate the release of the ATV from the impound lot. Kavkaz Express, a Colorado-based trucking company, paid to have the bike shipped from Miami to the Make-A-Wish office in Denver. And Outdoor Innovations, a local landscaping company, engineered the final leg of the trip, delivering the ATV from Denver to Colorado Springs.

“There was a lot of work that went into it, and it took a lot longer than we expected,” Dishong said. “But ultimately we were able to give the family a happy ending.”

Bryan said she has made provisions to ensure that the ATV won’t be stolen again.

The four-wheeler did not come back unscathed. It had been custom-outfitted for Tapley, who has lost some motor control due to illness and chemotherapy. Most of the custom accessories are gone now, Bryan said.

But it runs just fine, and Tapley rides it every day, weather permitting.