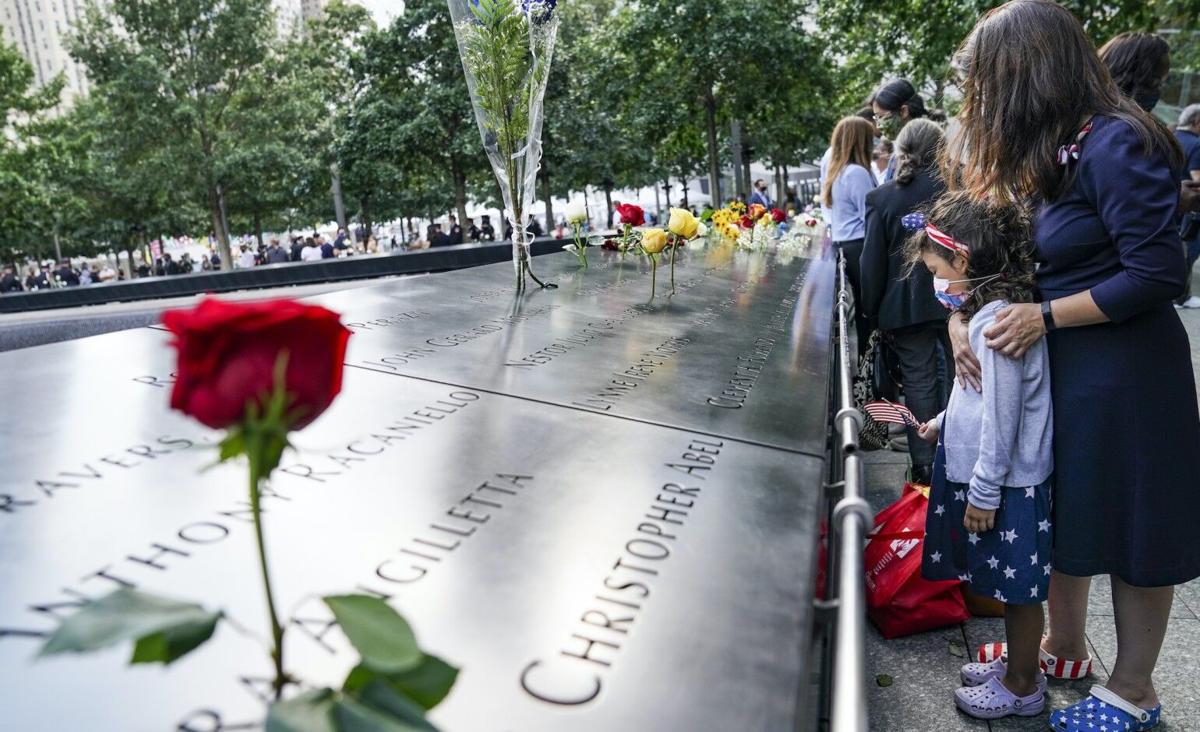 A rose is lodged in one of the victims’ names engraved on the north pool of the Sept. 11 memorial in New York.

A rose is lodged in one of the victims’ names engraved on the north pool of the Sept. 11 memorial in New York.

There’s a lot of stressful news to unpack the past few weeks. The brutal end to America’s two-decade war in Afghanistan. Extreme weather events including severe flooding in the eastern United States and devastating fires in the west. COVID infections hitting a peak not seen in nine months.

Yes, there is “positive” news happening at the same time, and I cheer for our Paralympic champions, our new businesses opening, our students and teachers performing well despite the challenges presented them, and all the “helpers” in the world, as Mister Rogers liked to recognize.

But today I would be remiss not to use this platform to reexamine the biggest news of just over 20 years ago — the Sept. 11 attacks on U.S. soil.

I don’t want to recount the terrible events of that day, which many (or I daresay most) of us can remember clear as a bell that can’t be unrung.

I want to talk about the America that has emerged in the two decades since those paradigm-shifting cataclysmic events.

“The enduring power of the Sept. 11 attacks is clear: An overwhelming share of Americans who are old enough to recall the day remember where they were and what they were doing when they heard the news. Yet an ever-growing number of Americans have no personal memory of that day, either because they were too young or not yet born,” states an article (“Two Decades Later, the Enduring Legacy of 9/11”) published by the Pew Research Center last week.

After the shock, grief and anger the attacks incited faded, a wave of patriotism surged in our country.

Nationalism. Support for one another and for our government in its decisions to retailiate and to start the ensuing “War on Terror.”

We were unified in our outrage, and we were forever changed.

The 9/11 attacks inspired overhauls of our country’s foreign and domestic policy, and immigration policy, but also to our culture — our literature, our arts, our education, our political sphere.

Twenty years is a significant amount of time to reflect. Did we change for the better, as a country? Do we continue to learn from this pivotal moment in history?

“The legacy of the 9/11 era is found not just in Afghanistan or Iraq, but also in an America that drew out and heightened some of its ugliest impulses — a nation that is deeply divided ... that bypasses inconvenient facts and embraces conspiracy theories; that demonizes outsiders; and that, after failing to spread freedom and democracy around the world, seems less inclined to uphold them here. More Americans today are concerned about domestic extremism than foreign terrorism, and on Jan. 6, 2021, our own citizens assaulted the Capitol building that al-Qaeda hoped to strike on Sept. 11, 2001,” states an essay (“9/11 was a test. The books of the last two decades show how America failed.”) published Sept. 3 in the Washington Post.

Says the Brookings Institute in an Aug. 27 blog post (“How America’s response to 9/11 contributed to our national decline”), “We were hardly a united country on Sept. 10, 2001, but our divisions are far worse today.”

We are a country more divided than united today. Politically. Idealogically. In our response to our current pandemic.

We are imperfect. We are human.

But there is the possibility of change.

And, ironically, that change will be decided by the generation that was born after 9/11, and the one that is too young to remember it.

Going forward from this 20th anniversary of 9/11, which changed our everything, we can decide:

How do we want to shape our country as the next generations inherit it?