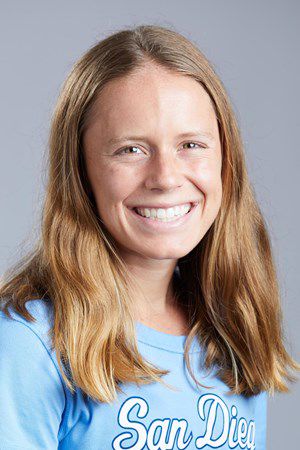 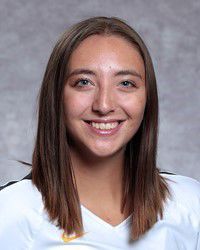 Lambros, a resident of Florissant and a 2016 Cheyenne Mountain High School graduate, is in her redshirt junior season with the Toreros. In her college bio, she said that, “Growing up on a dirt road in a town that has no stoplights gave her a lot of room to run.” She helped San Diego to a fifth-place finish at the recent West Coast Conference Championships. She was the fourth of five Torero runners to cross the line of the 6K course (22 minutes, 16.87 seconds). As a junior, Lambros competed in three cross-country meets for the Toreros, including WCC Championships. She ran a personal 5K best of 18:05.1 at the Highlander Invitational. She is also a member of the school’s track and field team. She ran in six meets in the spring, finishing fourth in the 3000m with a personal best 10:06.55 at the Aztec Invitational, and fourth in the 10,000m at the Bob Larsen Distance Carnival setting a new personal record (36:55.41). She earned a personal best in the 800m at the Steve Scott Invitational with a time of 2:19.04. She ran a personal best 17:10.45 in the 5000m at the Occidental Invitational. As a prep she held the Cheyenne Mountain record for the 3200m (11:04) her junior year. She ran 18:28 in the 5k to win the Colorado State Snowshoe Championships along with the honor of MVP of her high school cross-country team during her senior year. Her father, Stan, is Cheyenne Mountain’s cross-country coach. Her mother, Karen, ran track and cross-country at the University of Maryland in Baltimore.

Swan, a 2017 graduate the Colorado Springs School, is in her junior season as a right side hitter with the Tigers. CC was 30-4 heading into last week’s NCAA Division III first-round match-up with Whitworth in Atlanta. She has played in 24 games this season and has 50 kills. As a junior, she played in 30 matches, including 19 as a starter, for a total of 85 sets. She ranked fifth on the team with 138 kills and seventh with 1.62 kills per set. She earned a spot on the SCAC Academic Honor Roll for excellence in the classroom during the fall semester. As a sophomore, she played in 17 matches for a total of 26 sets and ranked second among the first-year Tigers with 26 kills. As a prep, she earned three varsity letters as a setter, outside hitter and right side hitter. She was a team captain during her final two seasons. As a senior she helped the Kodiaks finish third at the state tournament. They were fifth in both 2014 and 2015. Her father, Rick, is in his 22nd season as the head coach of the Tigers. He is the winningest coach in school history with nearly 600 victories. Laney’s sister, Mackenzie, played high school volleyball for Pine Creek and in college for Jacksonville.