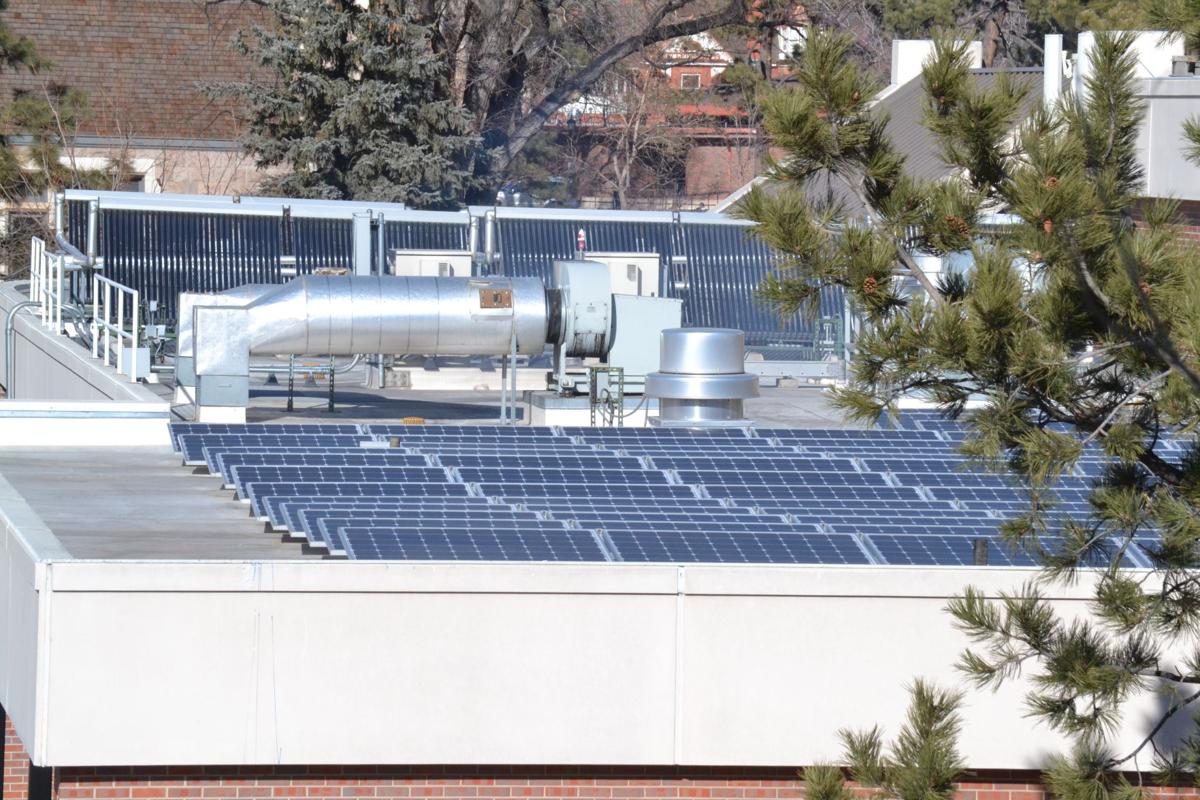 Solar panels are on many rooftops on the Colorado College campus, including these on the student center, contributing to the campus reaching a goal of carbon neutrality. 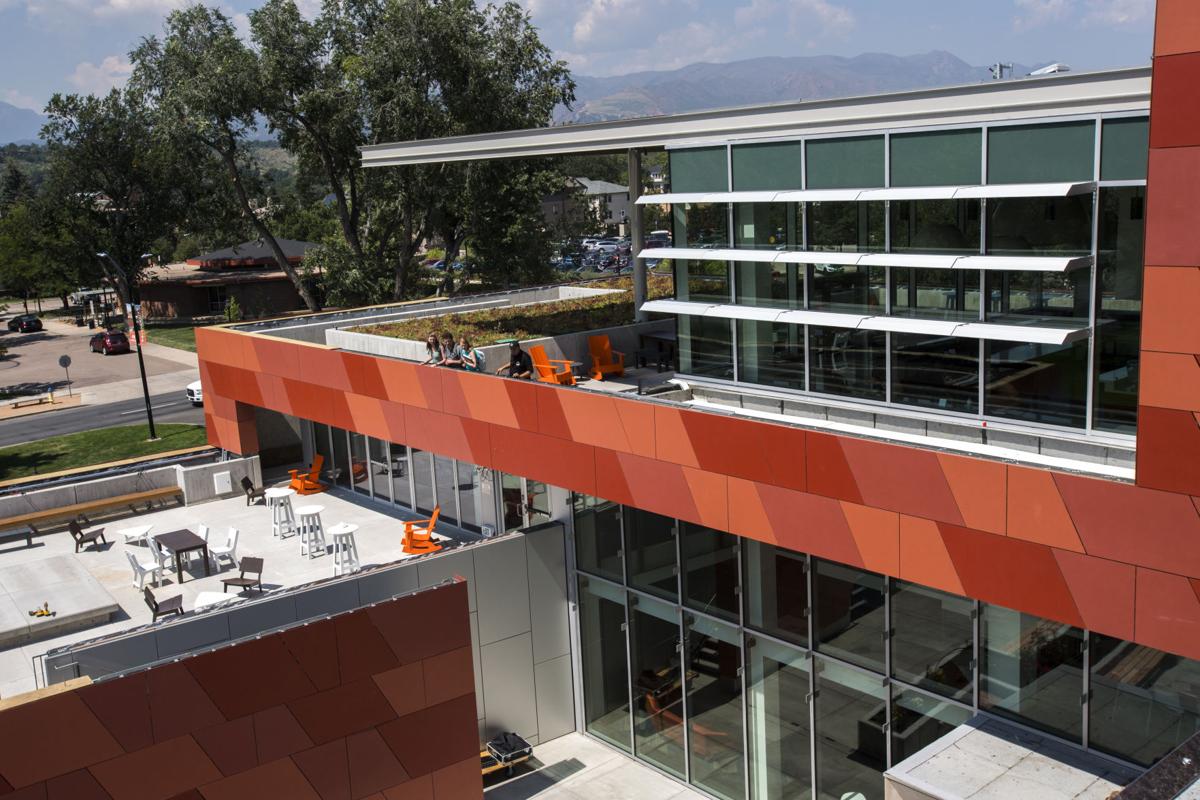 Six percent of Colorado College campus’ electricity, or 1 megawatt, is powered by solar panels on such buildings as the expanded Tutt Library — which also features geothermal energy, said Ian Johnson, sustainability director of the CC Office of Sustainability. In this Aug. 28, 2017 file photo, CC Students look over the balcony outside the third-floor cafe at the renovated Tutt Library.

Solar panels are on many rooftops on the Colorado College campus, including these on the student center, contributing to the campus reaching a goal of carbon neutrality.

Six percent of Colorado College campus’ electricity, or 1 megawatt, is powered by solar panels on such buildings as the expanded Tutt Library — which also features geothermal energy, said Ian Johnson, sustainability director of the CC Office of Sustainability. In this Aug. 28, 2017 file photo, CC Students look over the balcony outside the third-floor cafe at the renovated Tutt Library.

In 2007, Colorado College sophomore David Amster-Olszewski circulated a petition that 70% of the school’s 2,000 students signed in 10 days, calling for the campus to commit to reaching carbon neutrality.

Two years later, the campus set 2020 as the date to eliminate greenhouse gas emissions from certain campus operations and use renewable energy sources.

On Jan. 24, the college celebrated the realization of that goal.

Amster-Olszewski, whose career in renewable energy was launched by that student-led drive, said he knew the grassroots initiative was achievable.

“We were looking for how do we address climate change not just for the college but in a way that sets a precedent and serves as an example for others to see this is possible,” he said. “There were a lot of questions since it had never been done before — is this something the college could commit to, would the technology be there, would it be a significant added expense that would raise tuition?”

The accomplishment proves the naysayers wrong, Amster-Olszewski said, and “validates the concept if you set bold goals, you’ll find ways to achieve them.”

Clean energy is now the modus operandi at the private liberal arts college in Colorado Springs, from electricity to fleet transportation, heating and cooling systems, waste material and air travel.

Colorado College claims the title of being the first in the city, state and Rocky Mountain region to accomplish the milestone of carbon neutrality and the eighth educational institution in the nation to do so.

“We’ve reduced on-campus emissions by 75% over the past decade, which is a huge number,” said Ian Johnson, sustainability director for the school’s Office of Sustainability.

It’s the largest carbon footprint decrease among the nation’s seven other carbon-neutral colleges, according to Colorado College officials.

“Other institutions have goals of becoming carbon neutral by 2040 or 2050,” said Paige Shetty, greenhouse gas inventory intern in the Office of Sustainability. “It’s pretty remarkable we did it in 11 years and are using the lowest number of carbon offsets. Nobody wants carbon neutrality to be offset with money.”

Johnson said 6% of the campus’ electricity, or 1 megawatt, is powered by solar panels on such buildings as the expanded Tutt Library — which also features geothermal energy — the college radio station and dorms, along with off-site community solar arrays operated by third-party developers.

Helping push the college into the realm of 100% solar power was the Jan. 1 kickoff of a new Colorado Springs Utilities’ Green Power program that enables commercial and residential electric users to buy solar directly from the municipal utilities company to power homes or businesses.

Customer demand for a renewable-energy option led to the program, said spokeswoman Amy Trinidad. Two solar arrays, one that came online in November in Calhan and another that will be operational in March, are providing the sun power.

“Colorado College made the decision to replace all their electric needs with the solar power green tariff, and it’s huge that they were able to reach their goal,” said Steve Payne, a Colorado Springs Utilities portfolio manager who handles the school’s account.

The college has spent $250,000 annually on sustainability projects since 2013, for a total of $1.5 million, and saved $6.6 million from going to renewable energy, Johnson said, which “makes financial sense.”

Among its investments, Colorado College owns part of a methane destruction project at the Larimer County landfill in northern Colorado, for example, which prevents methane from entering the atmosphere, instead using it to generate electricity for county use.

What the campus has not done is divest of oil and gas company investments in its nearly $800 million endowment portfolio, which has been a rallying cry from students for years.

“It’s been an ongoing conversation with the Board of Trustees,” Johnson said, particularly how does divestiture from fossil fuel producers impact returns, since interest partially funds student scholarships and study-abroad programs, and how does it affect companies.

While recent research indicates returns are on par with traditional investments, fund managers are reluctant to share where all the money is being invested, he said.

And the $7 trillion collectively divested from fossil fuels “hasn’t moved the needle” on stock value for companies such as Shell, Exxon, Mobil, BP, Chevron and others, Johnson said. Such companies also are leading renewable energy research and development, he said.

“It’s a confounding issue,” he said. “There’s a massive effort to divest, but we’re not seeing it changes things.”

After former Colorado College president Dick Celeste put his name on the American College & University Presidents’ Climate Commitment to address global warming, Amster-Olszewski went on to install the first solar panel on campus. Over the last two months of the academic year in 2008, Amster-Olszewski raised $200,000 to buy and erect a 25-kilowatt solar array on a dorm, the equivalent of five homes in Colorado Springs and the largest nonmilitary setup in the city at the time.

“I feel climate change is one of those existential threats similar to World War II, where everybody has to band together to solve the problem,” he said. “You’ll invariably find a solution, even if you don’t know what the solution is when you start.”

No matter where people stand on the politics of the topic, climate change is the defining issue of the current generation, said Colorado College student body president Ethan Greenberg.

“It’s in the front of the minds for my peers and current students, who see it as an issue that disproportionately is felt along class and race lines, affecting low-income people, communities of color and refugees who lack stable housing,” he said. “We see it as the challenge of our generation.”

“We haven’t solved climate change,” he said. “We’ve been good at the technical and efficiency pieces, with energy reduction and replacing fossil fuels with solar, but the thing moving forward is behavioral change.”

Reaching carbon neutrality was “a heavy lift,” said senior Lily Weissgold, an economics and environmental studies major who worked on a project to install LED light fixtures in local schools to buy net carbon offsets for the college. “But we haven’t really felt the pain.”

Among students, there’s vocal buy-in and general ambivalence about the project, she said.

“They assume the administration is green-washing, or things aren’t really as good as they seem,” Weissgold said. “Those genuinely keyed in realize it’s a good-faith effort, and there’s positive sentiment. It’s something everybody should be thinking about.”

Unique passive-solar home near Colorado Springs a joy for homeowners

Jim Gagnepain calls it “the little bermed house on the prairie.”