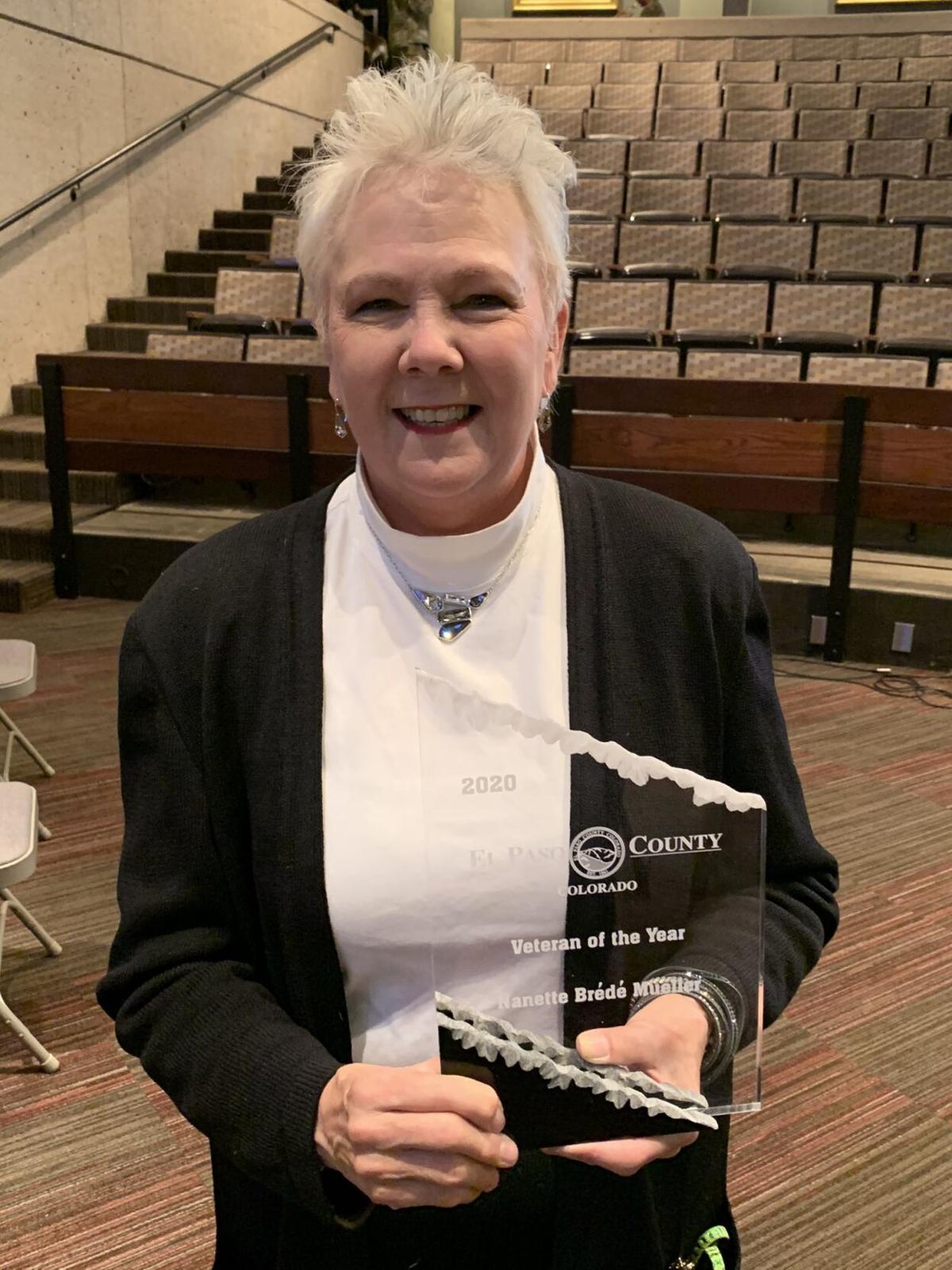 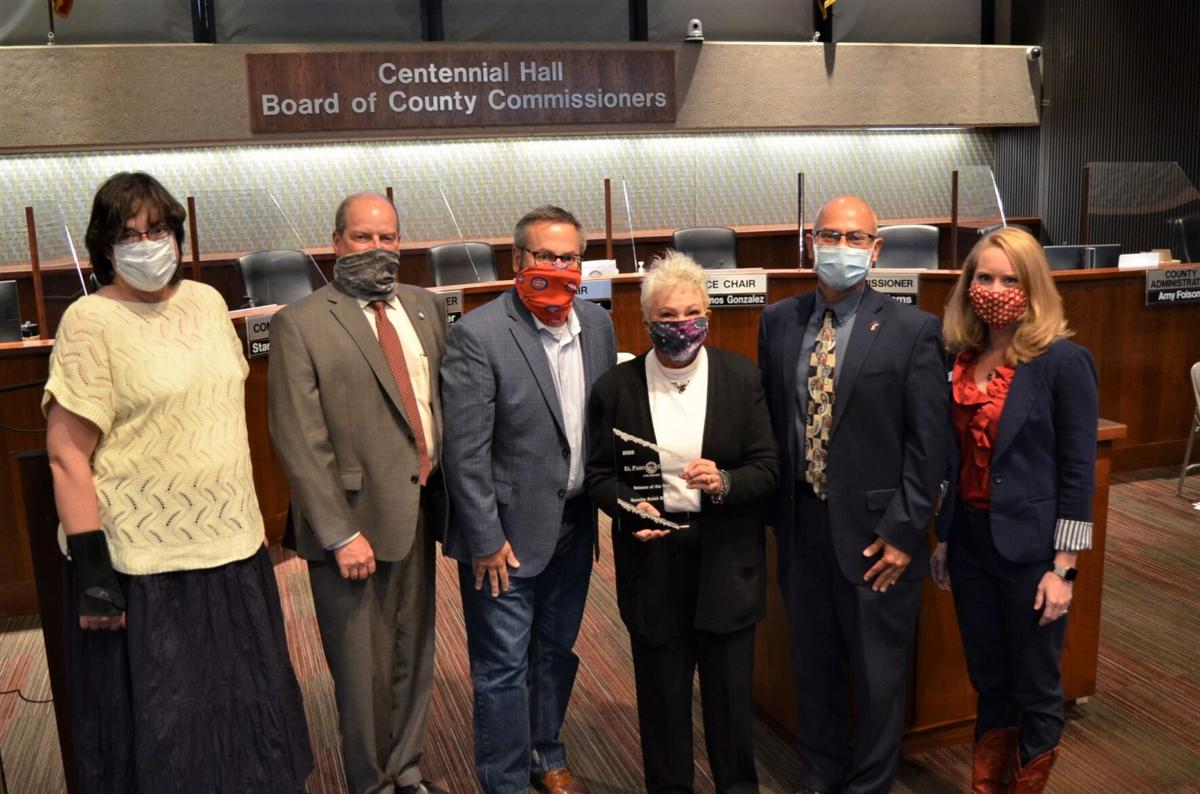 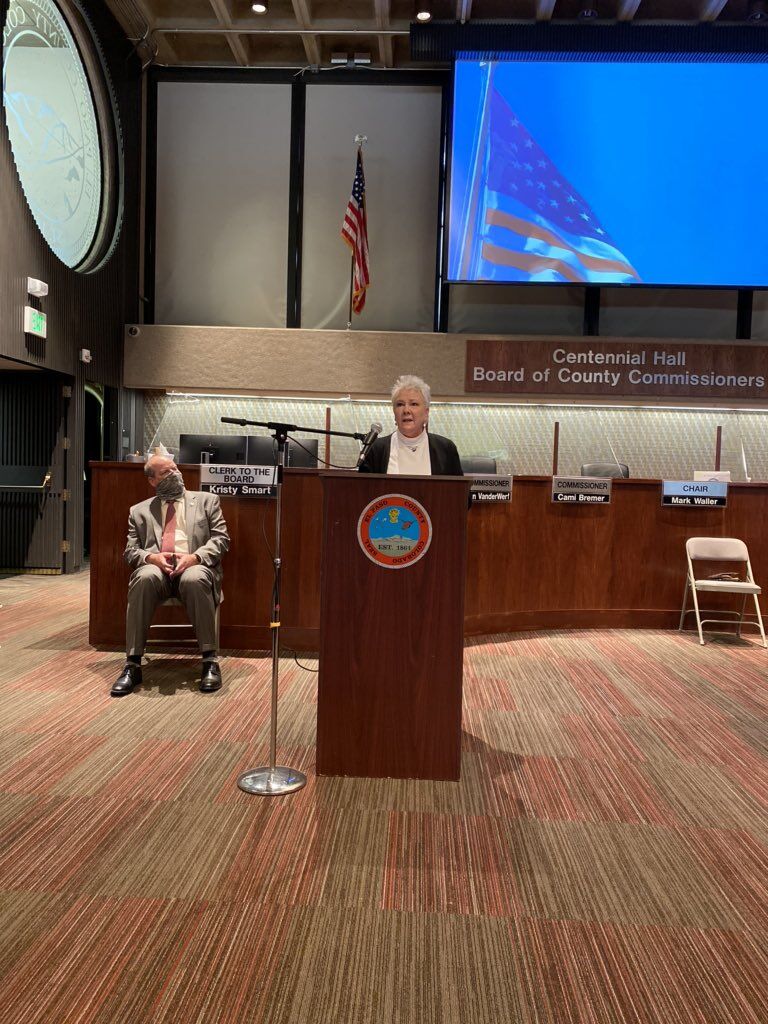 El Paso County’s Veterans Service Office and the El Paso County Board of Commissioners celebrated Col. Nanette Brédé Mueller as the Veteran of the Year at their annual ceremony, held Sept. 10.

“Col. Mueller is a difference maker, and seeing a need to empower the veteran community to better transition to civilian success, she established Prep Connect 360 eight years ago. This is a wonderful organization, and she has directly and positively impacting the quality of life for thousands of military veterans, working military spouses and family members in the Pikes Peak region and beyond.”

VanderWerf briefly described Mueller’s 29 years of distinguished military service in the Army and Army Reserves. “In uniform, Nanette found herself mobilized and deployed with chemical warfare gear to Washington, D.C. after the terrorist attacks of 9/11 as part of Operation NOBLE EAGLE, in the defense of the homeland. She led efforts building the defense of the nation’s capital under the command of NORAD, and previous roles in uniform would see her in leadership roles ensuring the reliability and availability of the nation’s strategic munitions supplies to certifying and fielding ballistic missile defense operators throughout the continental United States under the command and control of NORTHCOMM.

“She has directly led and mentored soldiers at the company level and was promoted to multiple strategic leadership roles ... and was responsible for policy development that continues to serve as the foundation today for national integrated Air and Missile Defense.”

In retirement, he continued, “Nanette is a servant leader.”

Since retiring in 2010, Mueller’s volunteer service to the veteran community includes national involvement in legislative issues, career transition, spouse employment, and work with the Veterans Community Living Center in the Pikes Peak Region. She served on the local and national Military Officers Association of America Board of Directors and is an award-winning volunteer with the Employer Support of Guard and Reserve.

Commission chairman Mark Waller noted that El Paso County is home to more than 100,000 veterans, who work, volunteer, raise their families and retire here, underscoring the need to establish this award. Waller presented the award to Mueller, who addressed the audience after a standing ovation.

“We are the mecca of veterans in this community. El Paso County is the third largest congressional voting district for a veteran population in the nation, and so that makes this an absolutely amazing honor,” Mueller said. “When veterans hang up their uniforms, they never stop serving ... they still continue to have a heart for service.”

Since her retirement, Mueller launched Prep Connect 360, a weeklong seminar taught in conjunction with Mt. Carmel Veterans Service Center and the Pikes Peak Workforce Center. Prep Connect 360 has produced 780 graduates, facilitating their transition into the civilian workforce since its inception in 2012.

In addition to a glass trophy, Mueller’s name was engraved on a brick paver that will be placed at the Veterans Monument in Bear Creek Regional Park.

“Veterans deserve our support and recognition for their exemplary military service, outstanding community service and endless encouragement to other local veterans. The Veteran of the Year award is our way to honor an El Paso County Veteran for their contributions to our community,” said Marshall Bosworth, El Paso County’s Veteran Service Officer.

Mueller also thanked the three other 2020 Veteran of the Year finalists. “They’re fabulous, and what they do — their contributions for this community — are incredibly remarkable.” They were:

Glen Cooper, who served in the Army for 25 years. After retiring in 2009, he continued his support of veterans by serving as a Mentor for Justice Involved Veterans with the 4th Judicial District Veteran’s Trauma Court. He volunteers as a Certified Equine Assisted Learning Instructor with the Warrior Remount Program, the River Deep Alliance, and has been elected three times as commander for the Military Order of the Purple Heart Chapter 423 for Southern Colorado.

James A. Reid, who after retiring from a career in the Air Force,served in leadership roles in both the Waldo Canyon and Black Forest fires. As director of the Pikes Peak Regional Office of Emergency Management, he has been instrumental in our region’s response to the COVID-19 pandemic. Reid is a member of the Calhan VFW and volunteers with the Young Marines, a veteran-led community-based program that provides mentorship and engagement for community youth 8 to 18.

Martin L. Trujillo, who served in the Marine Corps for over 30 years. Trujillo served as the Volunteer Program Manager for the Freedom Hunters and Warriors Heroes Outdoors program, which included managing, recruiting, and implementing an archery program to thank veterans and first responders for their service. He participates in the El Pomar Emerging Leaders Program and is a co-chairman of the Hispanic Advisory Committee.

The event was sponsored by The Broadmoor, Pikes Peak Regional Building Department and USAA.