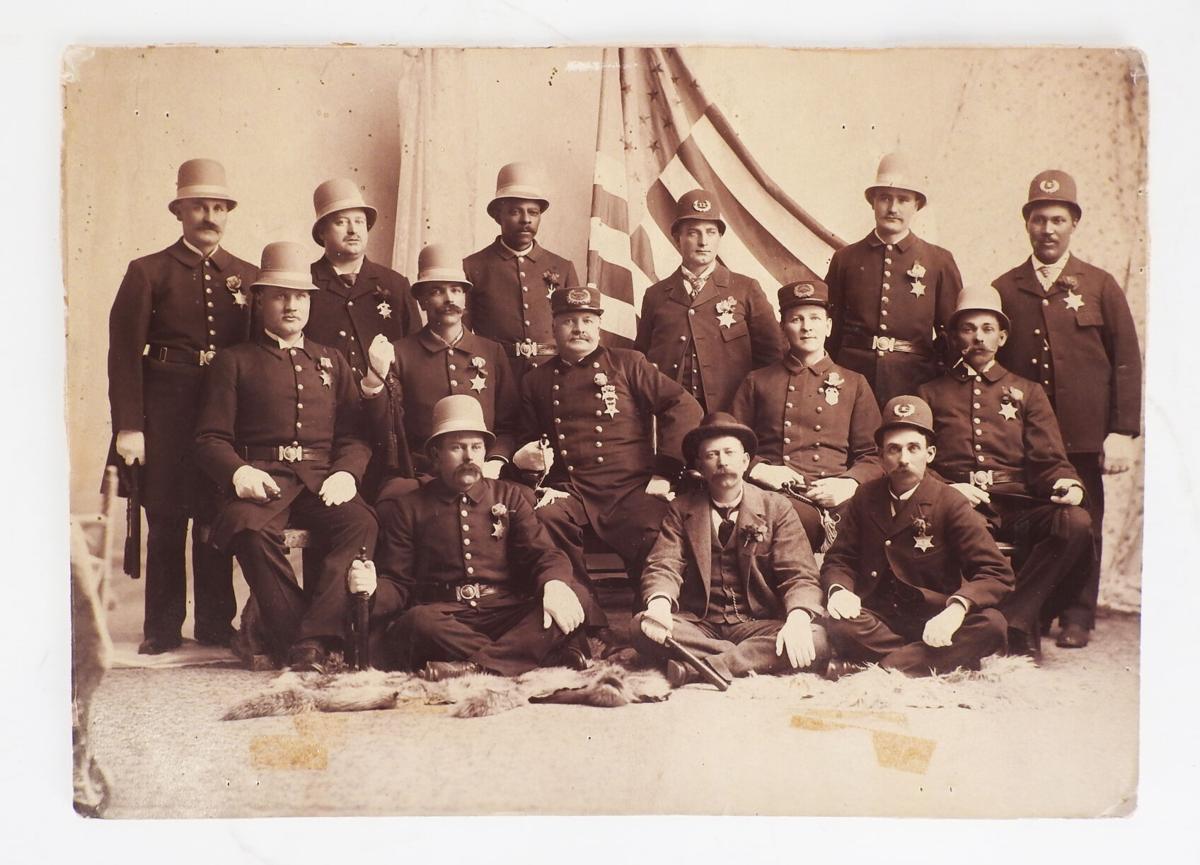 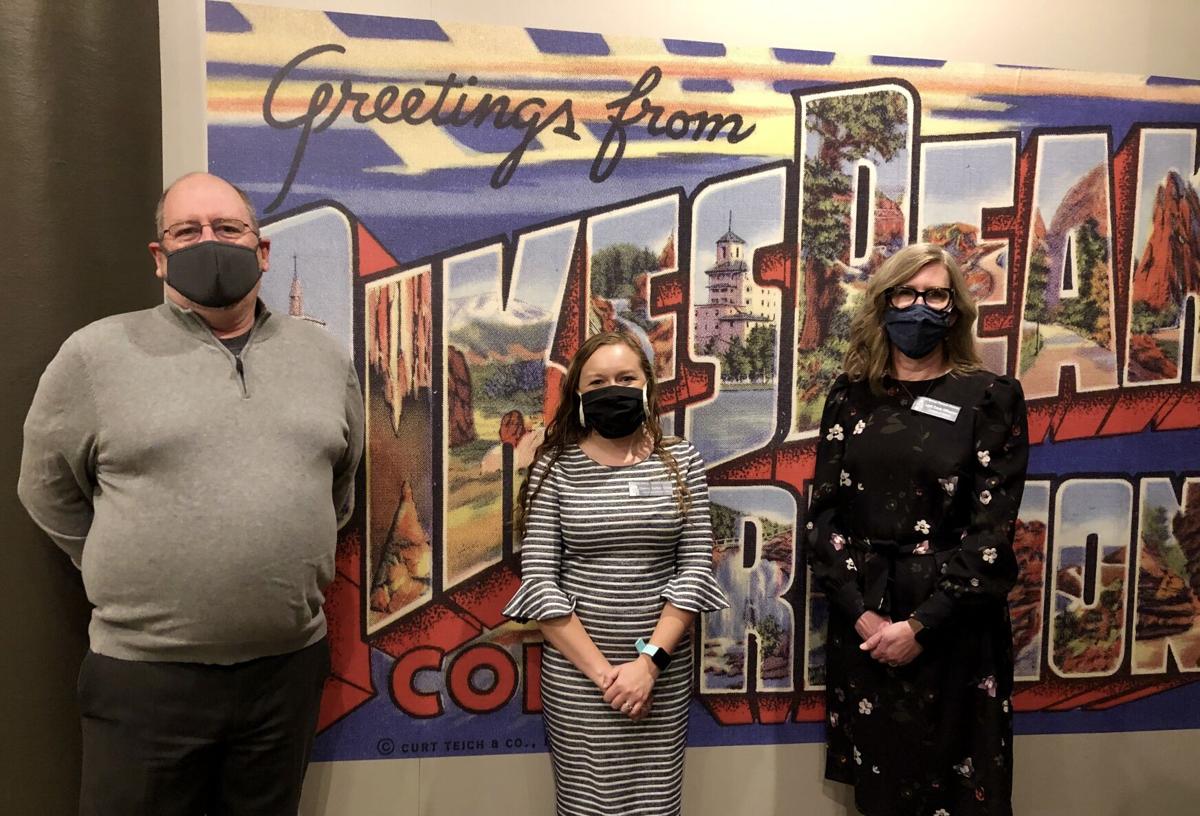 “Greetings from the Pikes Peak Region” were provided at the opening of the COS@150 exhibit at the Colorado Springs Pioneer Museum by, from left, Museum Director Matt Mayberry, Development Director Diane Stine, and Curator of History Leah Davis Witherow. 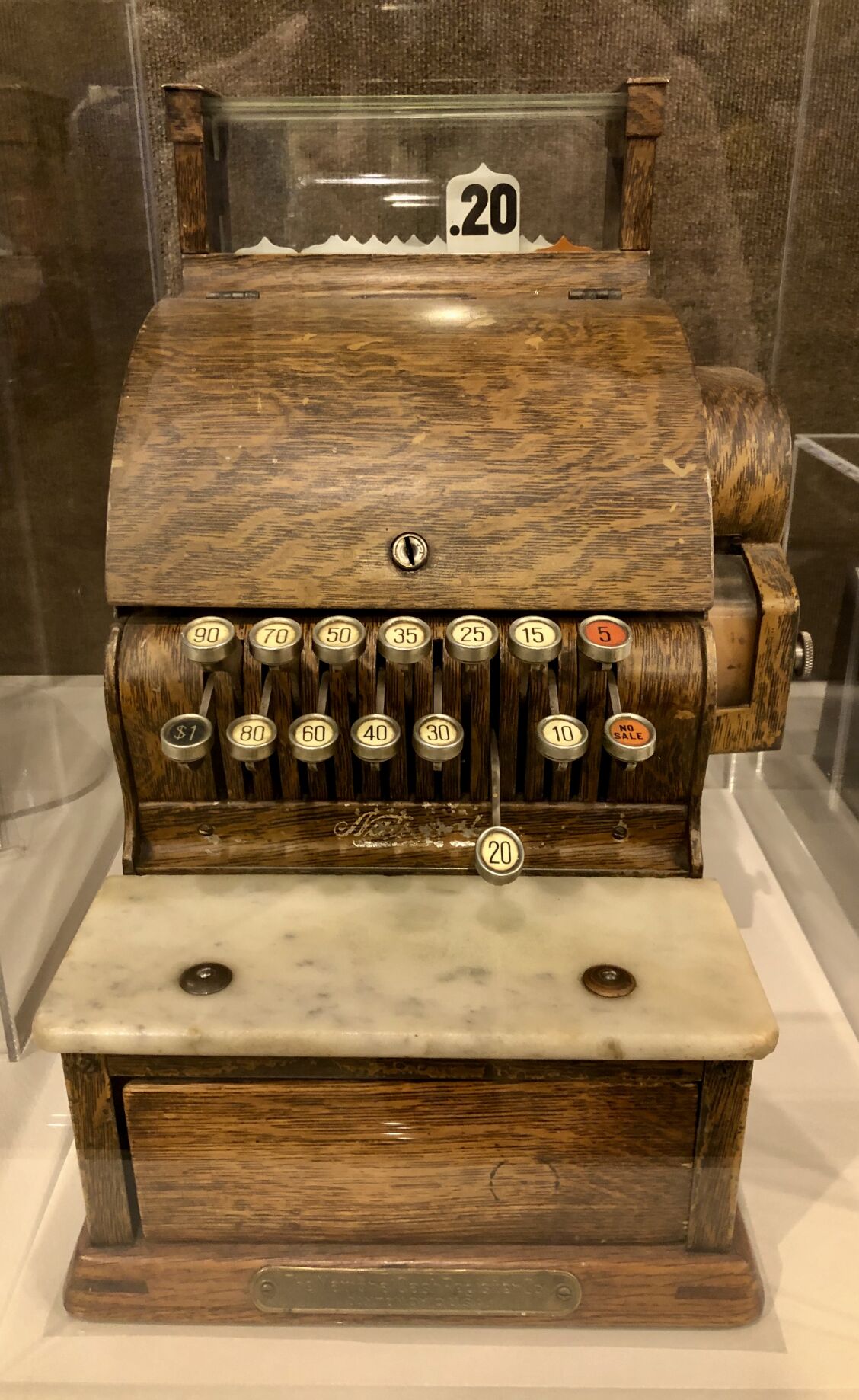 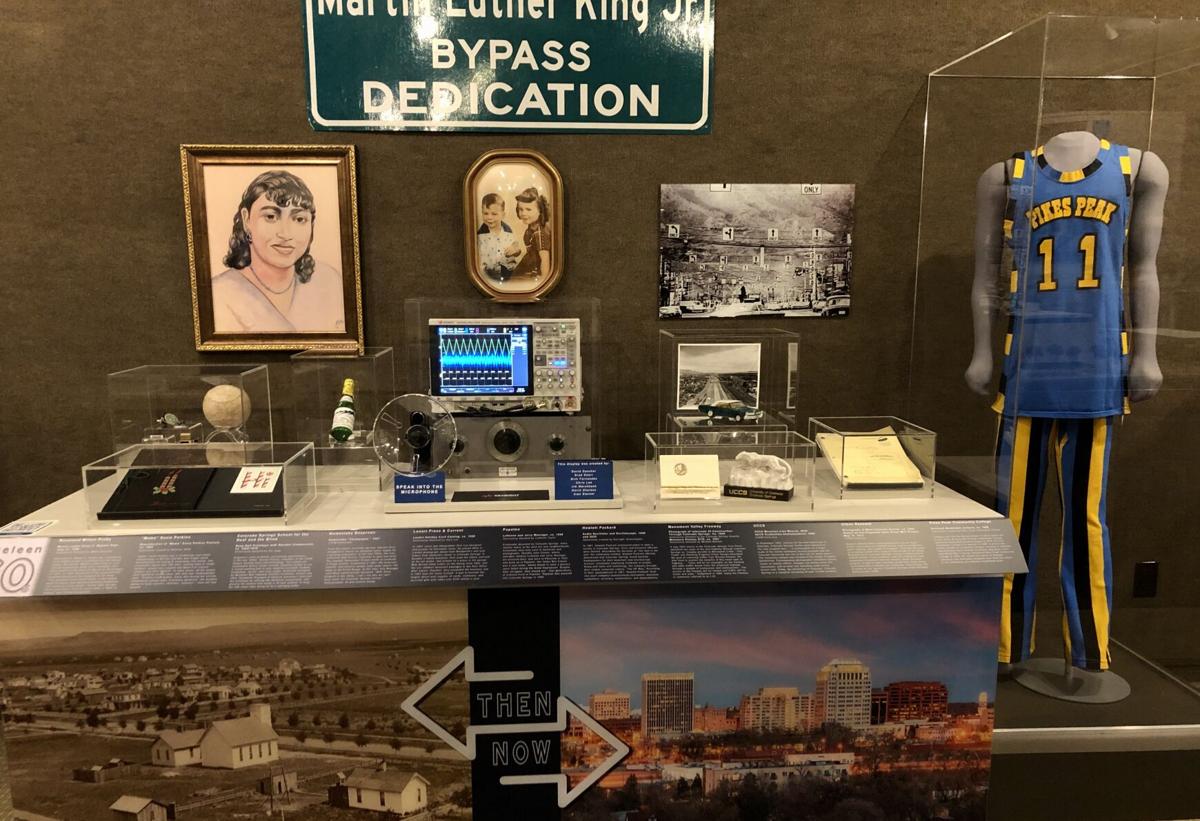 One of the display cases at the COS@150 exhibit illustrates the variety of articles represented. It includes some “then-and-now” photographs. 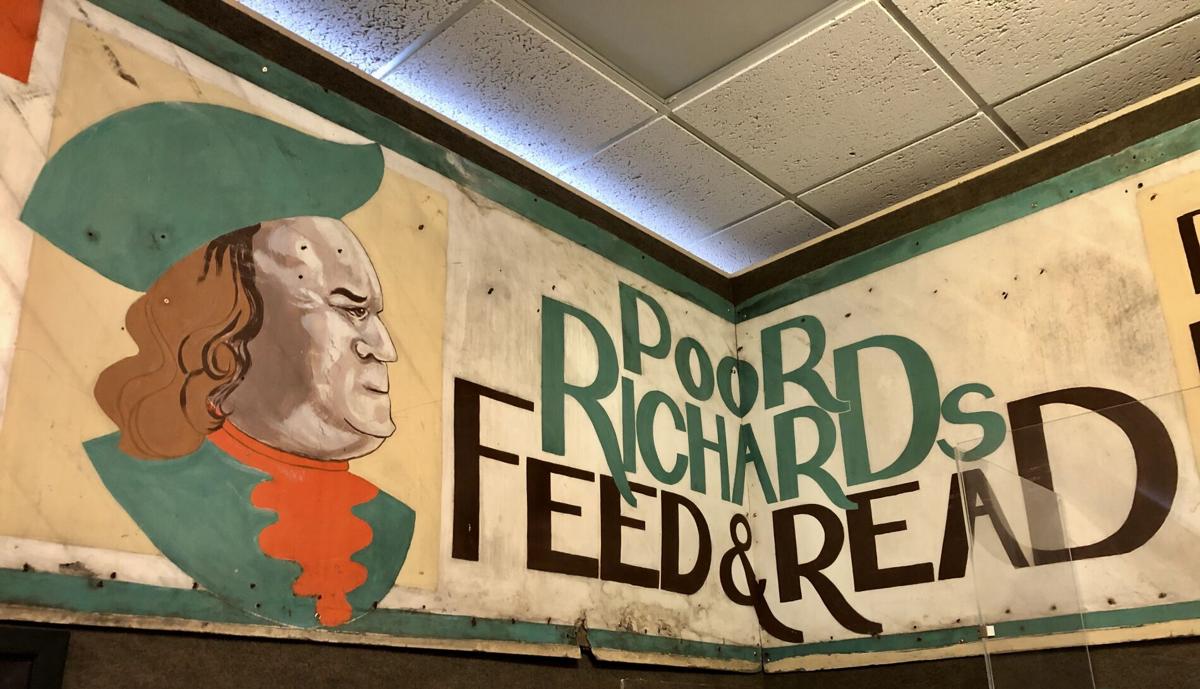 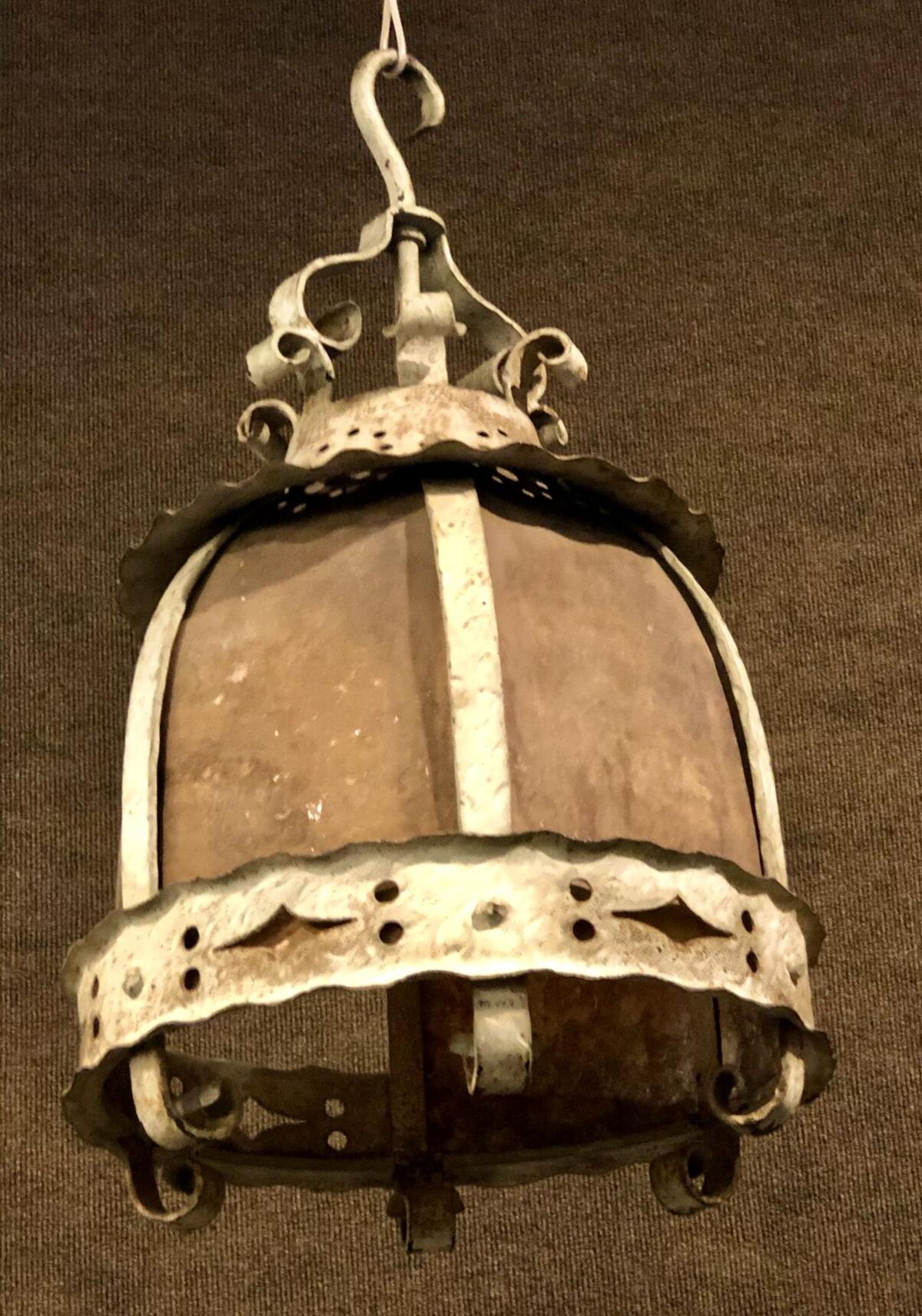 A lighting fixture from the second Colorado Springs Antlers Hotel.

A colorful square dancing dress and shoes are part of the exhibit. 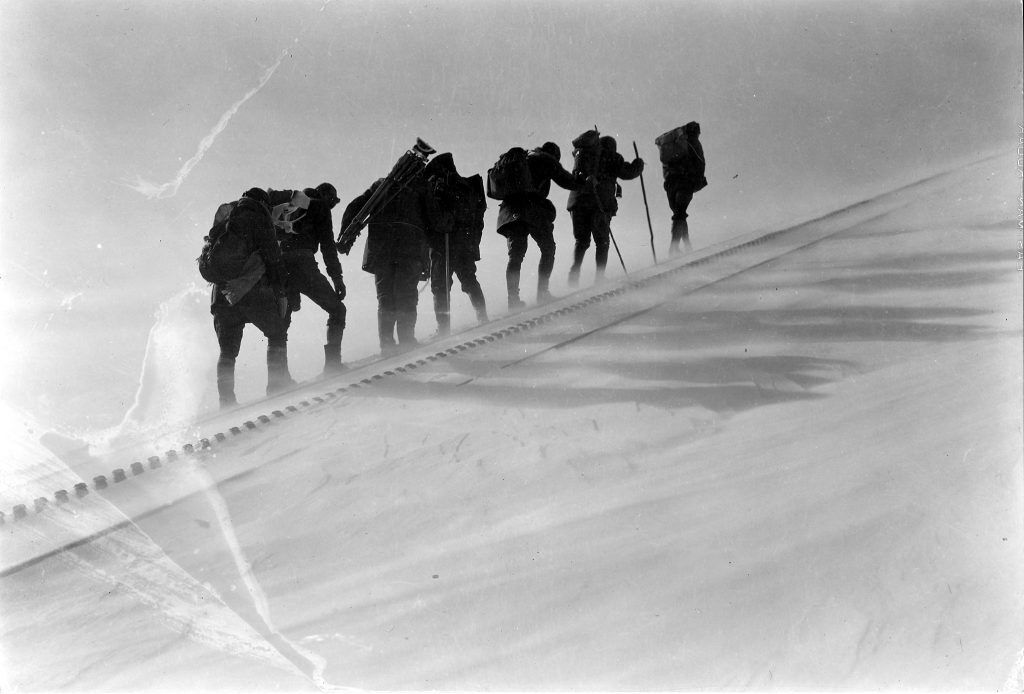 AAdmAn club members ascend Pikes Peak along the Pikes Peak Cog Railway tracks, circa 1925. The new exhibit “COS@150,” a timeline of the city’s history told through 150 objects, opened Jan. 30 at Colorado Springs Pioneers Museum. It’s part of the city’s yearlong string of events celebrating the sesquicentennial. 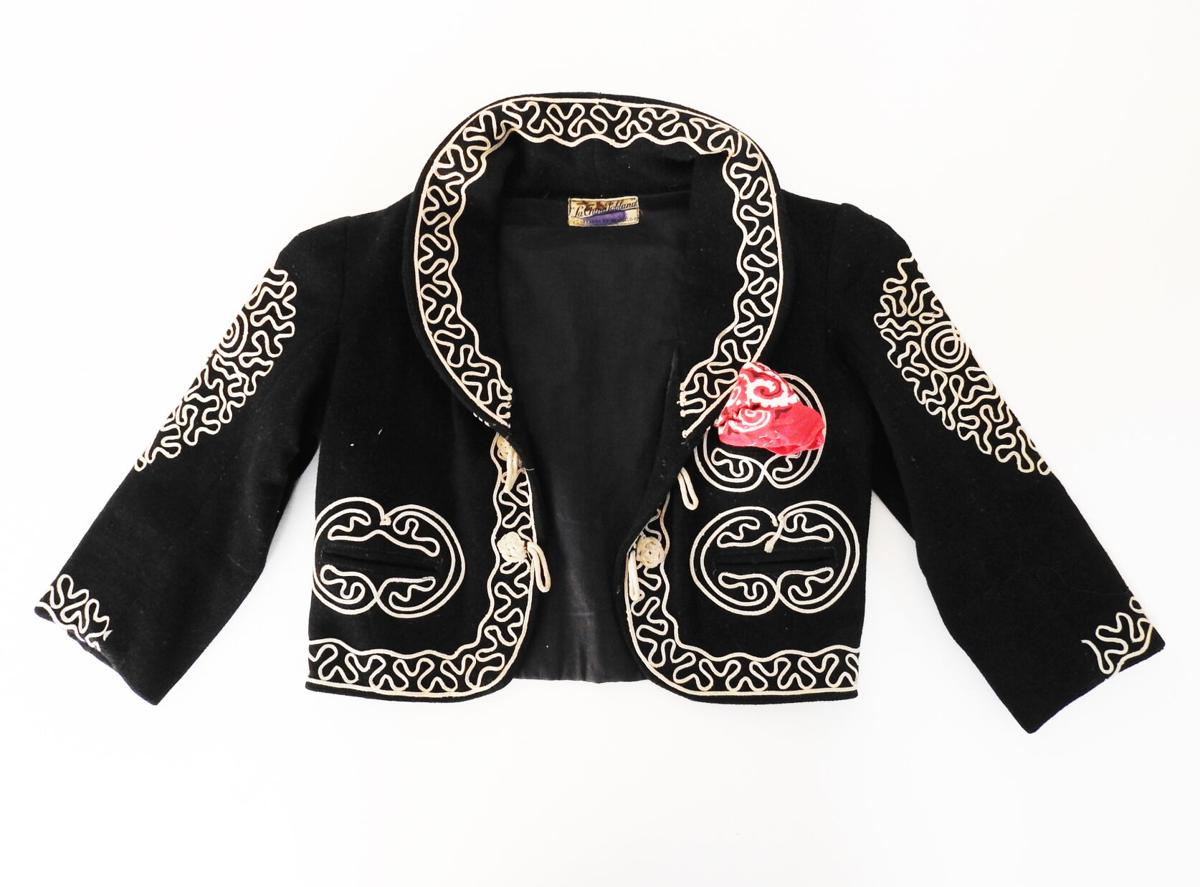 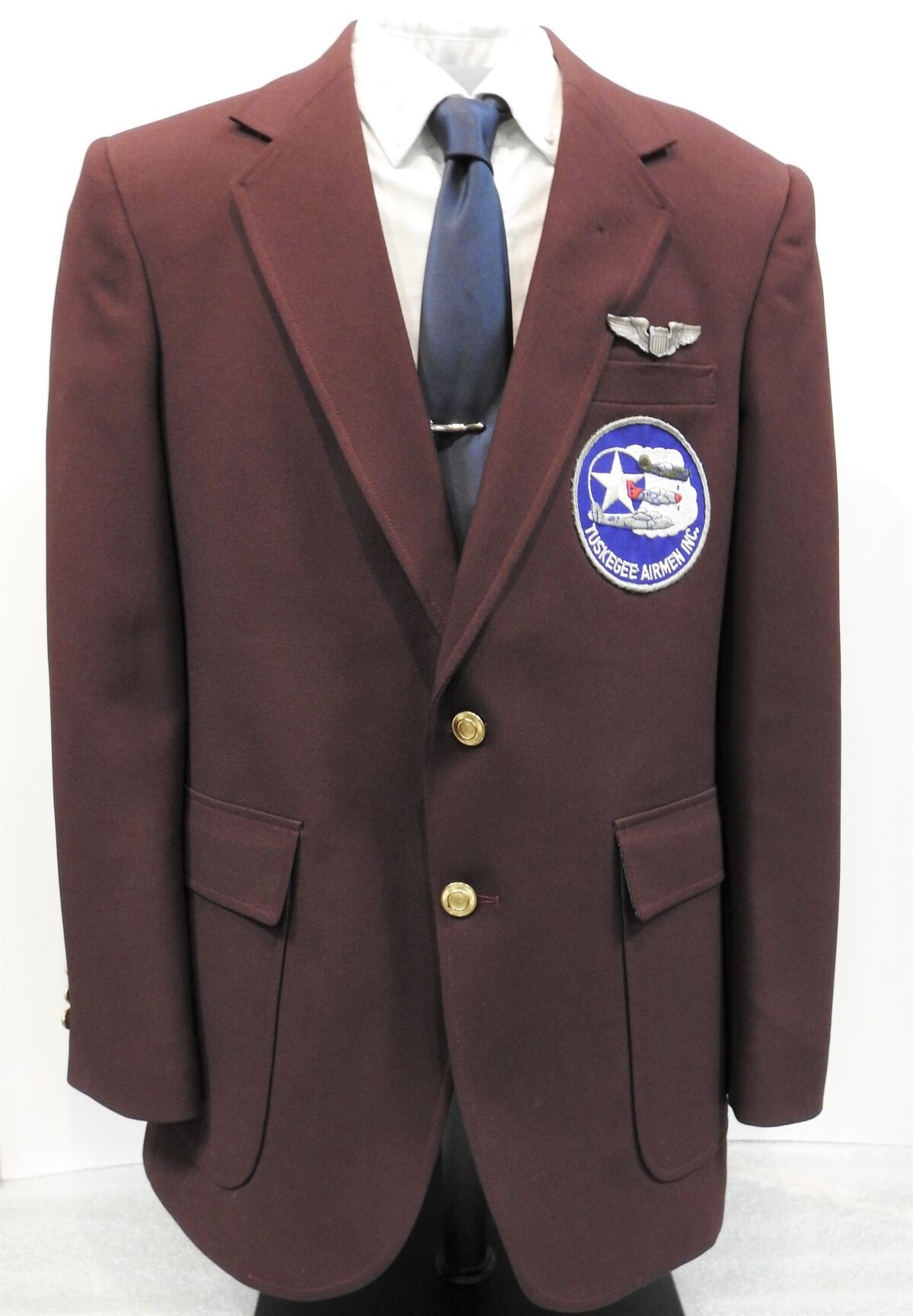 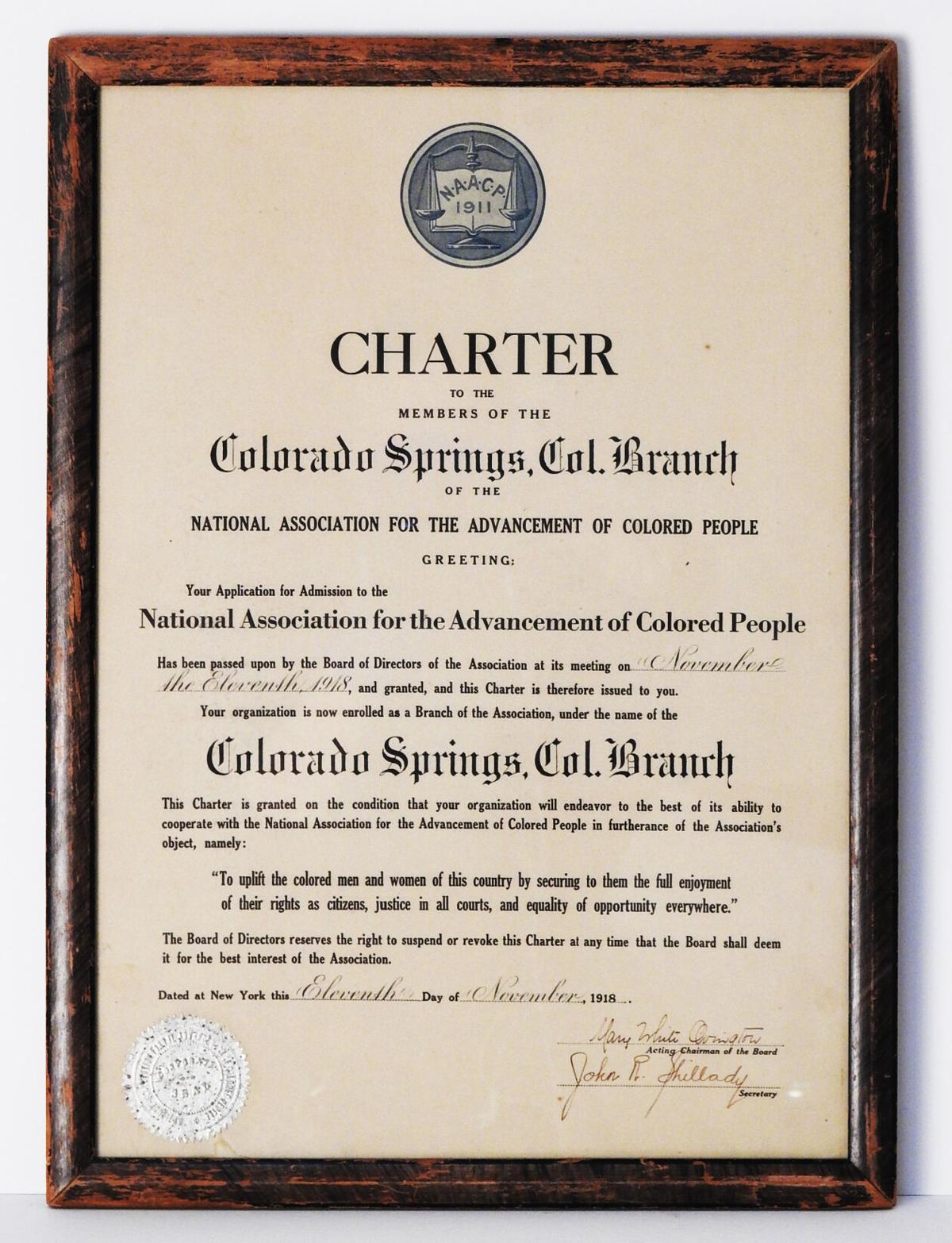 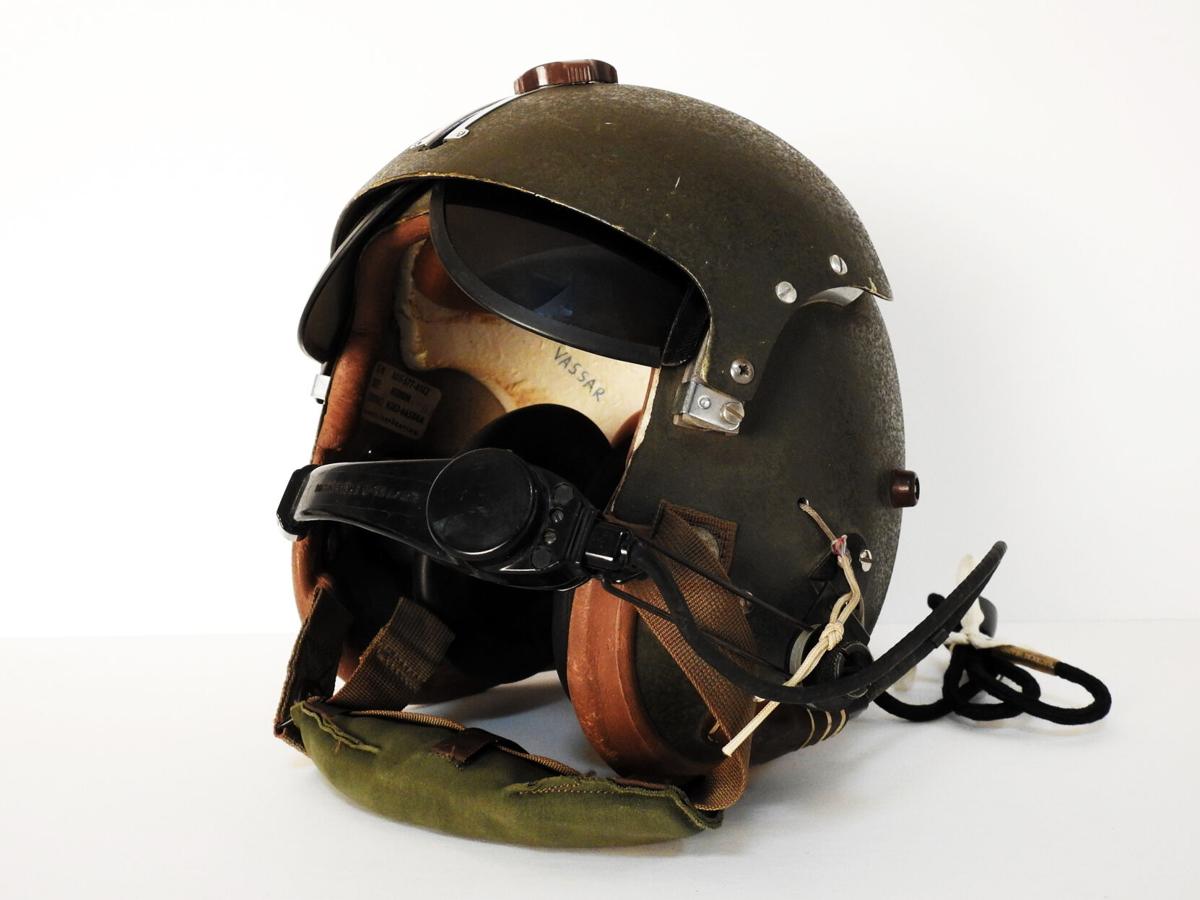 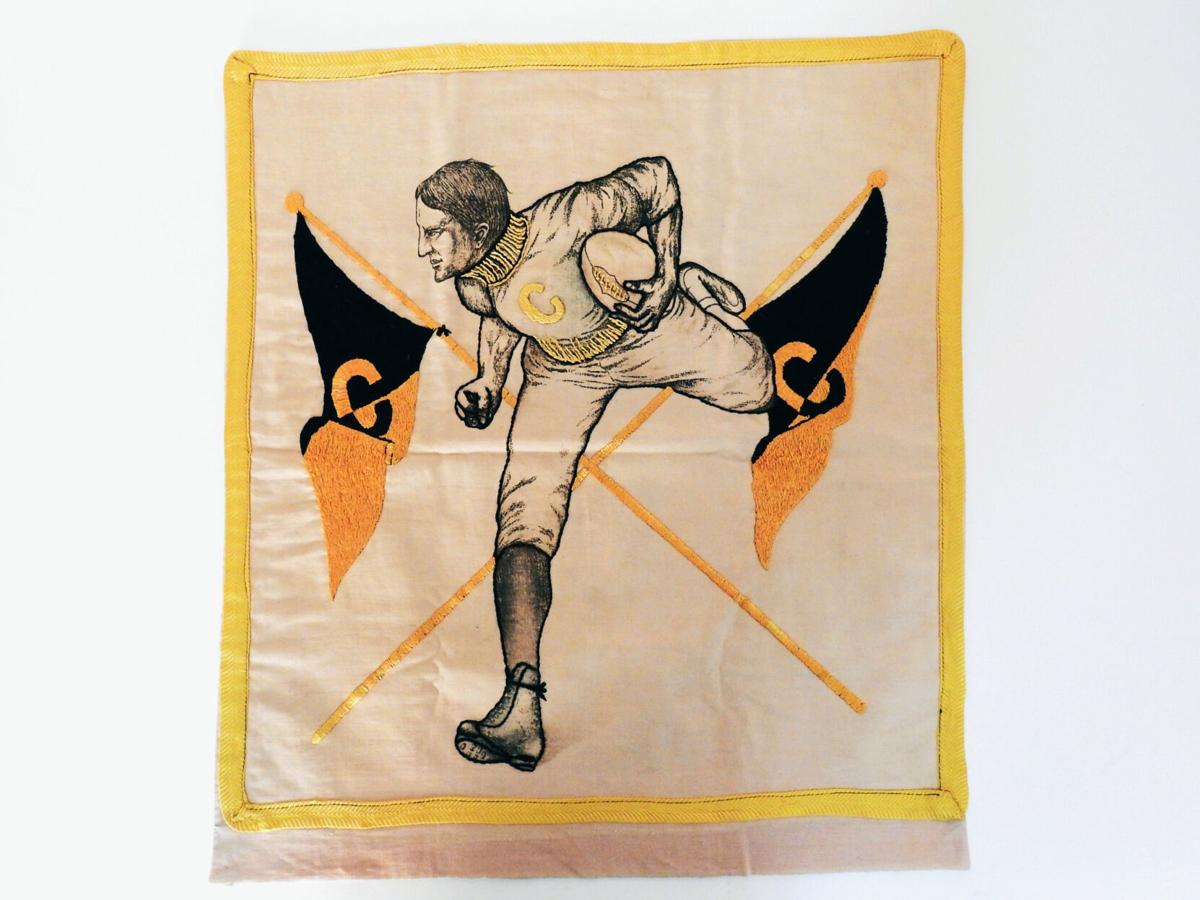 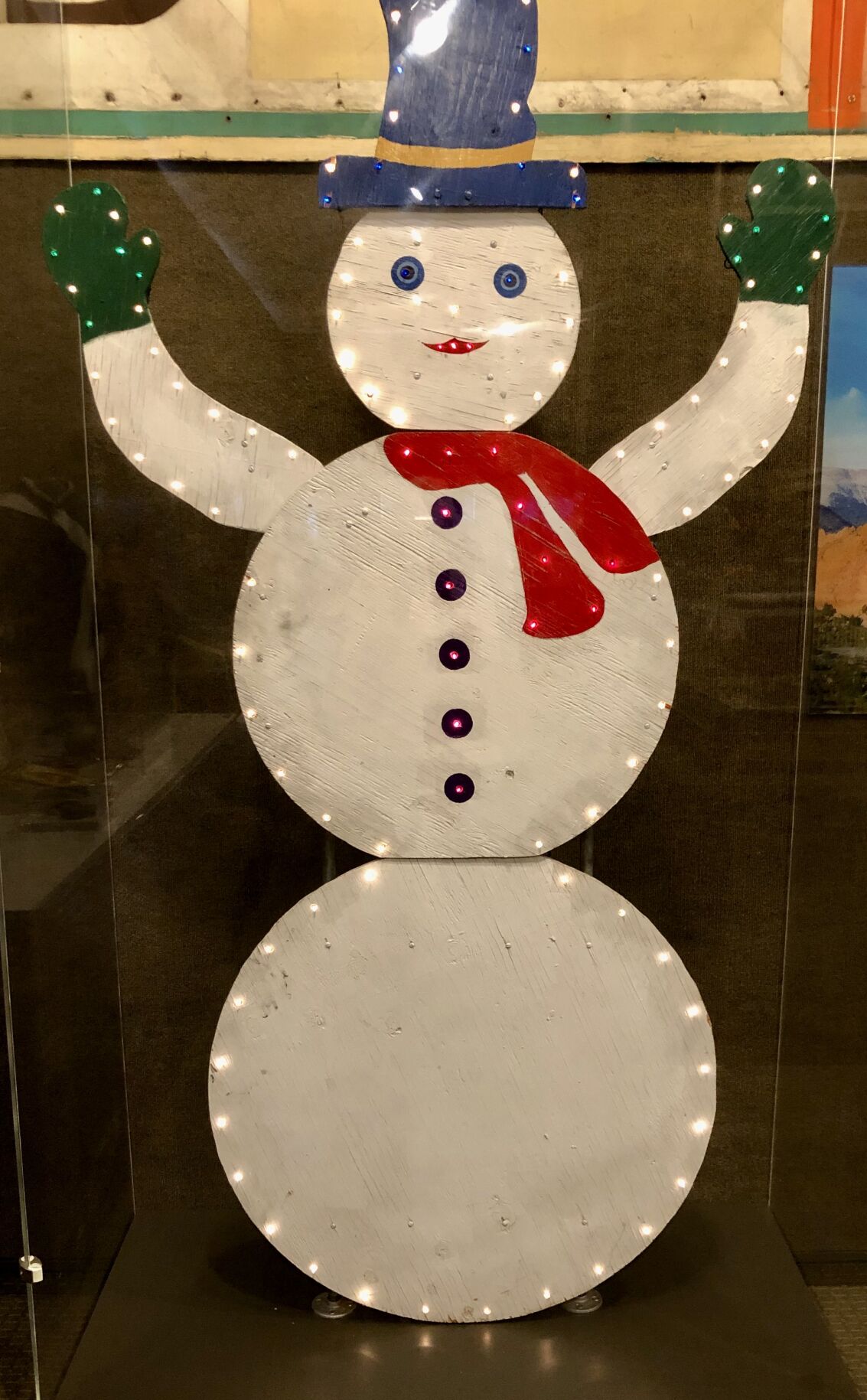 An illuminated snowman Christmas decoration from the collection of Joan and John Krull. During the mid-1900s, the Krulls decorated their Colorado Springs home with a huge variety of homemade decorations.

An illuminated snowman Christmas decoration from the collection of Joan and John Krull. During the mid-1900s, the Krulls decorated their Colorado Springs home with a huge variety of homemade decorations.

On Jan. 30, an inspiring new exhibit was unveiled at the Colorado Springs Pioneer Museum, celebrating the city’s sesquicentennial.

This phenomenal exhibit, “COS@150,” chronicles the history of Colorado Springs, focusing on 150 people, places or events that have shaped the city since 1871 — when the first city stakes were planted thanks to the vision of Gen. William Jackson Palmer.

When: Reserve a timeslot online at cspm.org/visit-the-museum

“COS@150” is the second of three exhibits that “…are multiple exhibits to showcase our unique and complex history,” said Diane Stine, the museum’s development director.

The first of those exhibits, “Evidence-Myths vs. Truths,” opened in 2019. The third exhibit, “Cultural Crossroads,” is planned to open in November. Each exhibit highlights different aspects surrounding what is fascinating and unique about Colorado Springs. Throughout the year, in-person and virtual programs will take place, including a scholar series and and family programs. Learn more at cspm.org.

Upon entering the “COS@150” exhibit, visitors are greeted by a portrait of General Palmer, along with large photographs of the open prairie lands in 1871 — when Colorado Springs emerged — and an aerial view of the city 150 years later. The collective changes during this time are astounding.

Palmer envisioned a planned resort town embellished with parks, churches, tree-lined boulevards and community-supported enhancements. Thousands of trees were harvested in the Arkansas River Valley, and re-planted bordering the streets. Today his vision has been realized, and then some, in our sprawling city.

The exhibit is a burst of color, drawing the visitor in to view and savor each of the 150 objects — many of the objects have never before been seen by the public.

Exhibit designer Kelly O’Hara, who grew up in Colorado Springs, uses design to tell the story by promoting interest through aesthetics that draw thoughtful comparisons to then and now.

Colorado Springs had the advantages in 1871 that it still has today: a beautiful setting where the mountains meet the plains, a mild climate and ongoing opportunities for growth. As the history of the region is so extensive, choosing only 150 representative pieces was certainly a challenge. Included is everything from fossils and the cast of a dinosaur footprint found in Red Rock Canyon Open Space to recognition that the Ute Indians were the original settlers of the region and the ongoing triumphs and challenges representative of the development of a true community.

Objects were chosen from the 75,000 artifacts in the museum’s collection as well as from private collections. The 150 objects highlight what is unique about the city and showcase the progression of Colorado Springs not only becoming a city, but also a community. The challenge is to pique the interest and curiosity of museum-goers, providing new ideas along with opportunities to delve more deeply into what the objects and stories represent.

Museum Curator of History Leah Davis Witherow says, “No two people are going to experience the exhibit in the same way.”

Witherow encourages more than one trip through the exhibit as once is not enough time to digest the range of history represented. Generational groups are welcomed and encouraged.

“Learning happens in conversations between generations in a gallery,” Witherow said.

The enticing stories are highlighted chronologically by decade starting with the 1870s, Exhibit rooms provide a perfect blend of color, information and remedies for curiosity. Vibrant clothing representative of the region is included, such as a lush velvet opera cloak, a bright red square dancing frock, a Colorado Springs High School Cadet Uniform Jacket, and the buckskin suit of a rodeo queen.

Some artifacts are what one might expect in such a showing, such as a Colorado Springs Weekly Gazette from 1873, Van Briggle pottery tiles, a hanging lamp from the second Antlers Hotel, a Thomas MacLaren architectural drawing, a cherub arch from the Burns Theater, and a sign from 2020 addressing homelessness stating: “Handouts Don’t Help.”

Surprising pieces include the death mask of Winfield Scott Stratton, a piece of an original wooden water pipe that carried water from Fountain Creek, the charter document for the Colorado Springs branch of the NAACP, a dress made from Holly Sugar sacks, and a large illuminated snowman from the locally famous Christmas decoration collection of Joan and John Krull.

One gains an understanding of how the past connects to the present, a sense of belonging to a remarkable community, and curiosity about what the next 150 years will look like. The museum is free to visit, but for this exhibit, visitors must reserve a timeslot online at cspm.org/visit-the-museum.