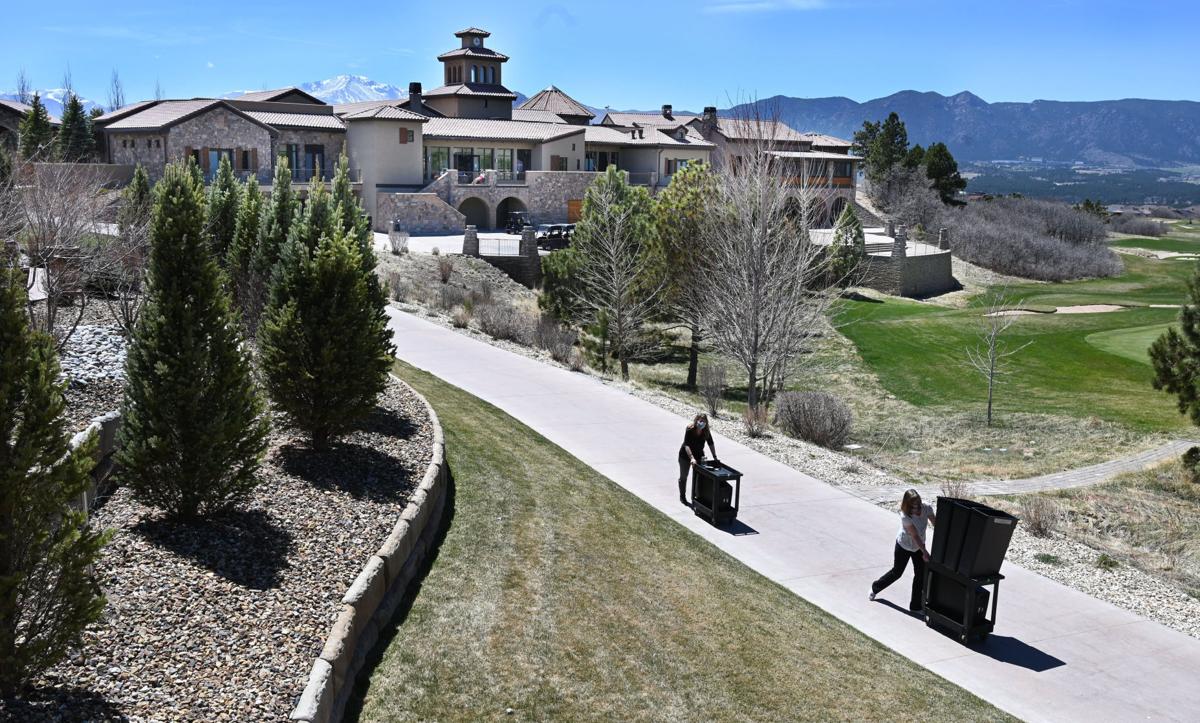 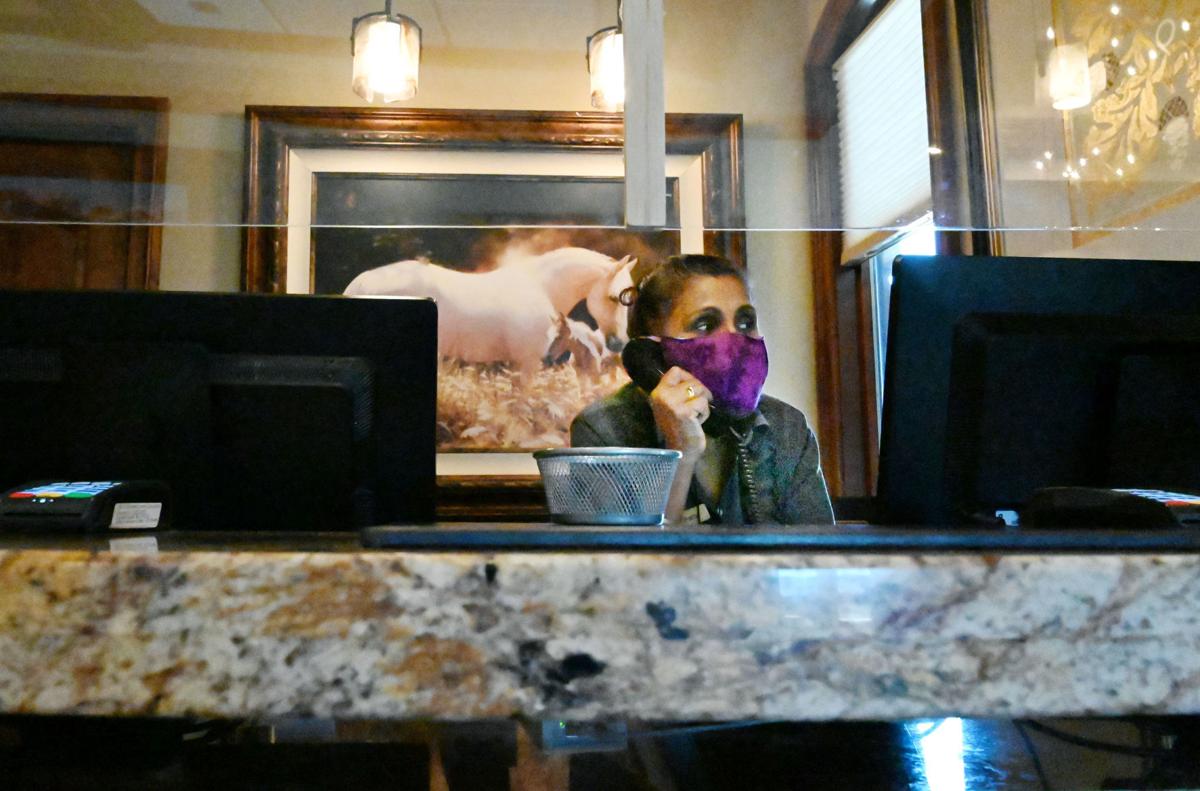 Patty Patel answers the phone at the front desk behind Plexiglas at the Lodge at Flying Horse on Wednesday.

Patty Patel answers the phone at the front desk behind Plexiglas at the Lodge at Flying Horse on Wednesday.

Some Colorado Springs-area hotels and motels that closed temporarily amid the COVID-19 pandemic are back in business or slowly making plans to reopen their doors.

Now, all they need are guests to fill their rooms.

“The hard part is, so when are people going to be more comfortable to travel?” asked Bob Benton, an industry consultant and sponsor of the monthly Rocky Mountain Lodging Report.

The Lodge at Flying Horse on the city’s north side, which closed shortly after Gov. Jared Polis issued his stay-at-home order March 26, reopened April 18 in anticipation of those restrictions being relaxed, said Wendy McHenry, the property’s general manager. Some restrictions were loosened Monday, with more to come Friday.

The upscale, 48-room boutique hotel, which is part of the 1,500-acre Flying Horse residential development, only has a handful of guests so far, McHenry said.

But as Colorado transitions to Polis’ safer-at-home order, which allows retailers to open their brick-and-mortar stores Friday and for hair salons, tattoo parlors and other personal services to resume business with strict precautions, McHenry hopes that people will begin to move around more and consider traveling and staying at hotels.

“We’re only a couple of days into the new safer-at-home model, but our anticipation is that people have been stuck in their homes and I think they are going to want to get out,” she said. “Even locally. Just to have a little bit of a change of scenery. If I live on the south side of town, maybe I just want to get out for a weekend.”

The Lodge at Flying Horse has brought back its 110 employees, a large percentage of whom were furloughed when the hotel temporarily closed, McHenry said.

Hotel services and amenities also are slowly coming back, although in phases and within local, state and federal government guidelines, she said.

When guests check in, for example, they’ll find a Plexiglas barrier separating them from front desk employees.

At the Flying Horse golf course, which is part of the larger residential development and available to lodge guests, golfers check in at an outdoor station staffed by a mask-wearing employee.

Golf carts are limited to one rider or family members, such as spouses; rakes used to smooth sand after a bunker shot have been removed; ball washers have been shut off; and touching or removing flag sticks is not allowed. The golf course’s pro shop will reopen Friday, but with safeguards in place.

And once the hair salon at the Flying Horse spa opens Friday, guests getting their hair cut will be asked about their health before entering, and then must wear a mask as will their stylist.

“We’re getting a lot of inquiries,” McHenry said. “What’s happening is, people are calling because they want to get out. But they want to be able to get out to something. ... The questions are, is your spa open, can I go play golf, what can I do at your resort?”

The Red Wing Motel in Manitou Springs, whose mix of 19 comfy rooms includes several with full kitchens, caters to families and sports-oriented travelers in the spring and summer before closing for the winter.

But when the pandemic hit and events such as the Space Symposium in late March were postponed, guests canceled their reservations and the motel postponed its typical late March or early April opening, said general manager Suzie Hawkins.

Now, the Red Wing is poised to reopen May 15, though it doesn’t yet have reservations, she said. But two new employees are arriving from out of state to take jobs at the Red Wing and will live on site, so she needs to reopen, Hawkins said. Likewise, she said, she always likes to get her garden going at the motel around Mother’s Day.

Hawkins said the motel has received a loan through the federal government’s Payroll Protection Program, which will allow her to pay her employees and utility costs. When Red Wing reopens, employees will wear masks, they’ll clean pens each time a guest uses one to register and will continue what Hawkins said always has been a rigorous cleaning program for rooms.

The pandemic is just the latest challenge for her motel and Manitou Springs, Hawkins said.

The Pikes Peak Cog Railway, a tourist magnet for the town, has been closed since 2017 and is being rebuilt. Fires and floods since 2012 and even last year’s Manitou Avenue road construction project have hit businesses hard, she said.

“One hundred percent of my guests complained,” Hawkins said of the roadwork. “So it’s kind of been one thing after another and we still haven’t quite gotten ourselves up to where we could be or should be.”

Nearly 75% of Colorado restaurant workers laid off or furloughed since March, surveys show

The phones still aren’t ringing like they did when the Hilton Garden Inn opened in September and became downtown’s first newly built hotel in more than 40 years.

But the Hilton Garden Inn doesn’t want to keep its doors closed and is anxious to join other businesses that are proceeding with plans to reopen, he said. When it reopens, it will have only about 10 of its 50 employees, who will adhere to an extensive cleaning program and set of safeguards put in place for all Hilton properties, Valdez said.

“We want to join with others who are taking those steps,” Valdez said of moving forward. “We want people to know we’re still here and willing to serve the community.”

The operation of two prominent downtown hotels, The Antlers and The Mining Exchange, is in flux, said Springs attorney and businessman Perry Sanders Jr., who co-owns both properties.

The Mining Exchange temporary closed, and Sanders said he’s looking at a tentative reopening of June 1. The Antlers has remained opened with a reduced staff, but business has been poor, he said.

Of some other prominent area hotels, The Broadmoor has moved its reopening from Memorial Day weekend to June 28; the Great Wolf Lodge and Water Park says on its website it’s closed at least through June 15; and The Cliff House at Pikes Peak’s website says it plans to accept reservations after the end of April.

The factors behind a decision to reopen will vary from hotel to hotel, said Benton, of the Rocky Mountain Lodging Report.

For many, it will come down to profitability; what will it cost to operate the hotel, will they book enough rooms that are the bread and butter of any property and can they make enough money in the process?

And now, labor, utility, maintenance and other expenses will be compounded by the need to clean and sanitize hotels to ensure guest and employee safety, he said.

Limited-service hotels that primarily sell only rooms will have an easier time of reopening, Benton said. Large hotels with amenities such as restaurants and spas, or who specialize in meetings, conferences and conventions, will have a tougher go because they have so many moving parts to their business, he said.

And, despite some states relaxing their stay-at-home orders, tourists aren’t going anywhere and businesses have slashed employee travel, Benton said. A recent hotel industry report by national real estate firm CBRE forecasts a nationwide hotel occupancy rate of 42.6% in 2020, a more than one-third drop from 66.1% in 2019.

“It’s going to take a while for people to get comfortable to travel,” Benton said. “It’s going to be interesting to see how it bounces back.”

Business closures and layoffs triggered by the coronavirus pandemic sent the Colorado Springs area unemployment rate soaring from a 30-year low in February to a 5½-year high in March, the U.S. Bureau of Labor Statistics reported Wednesday.