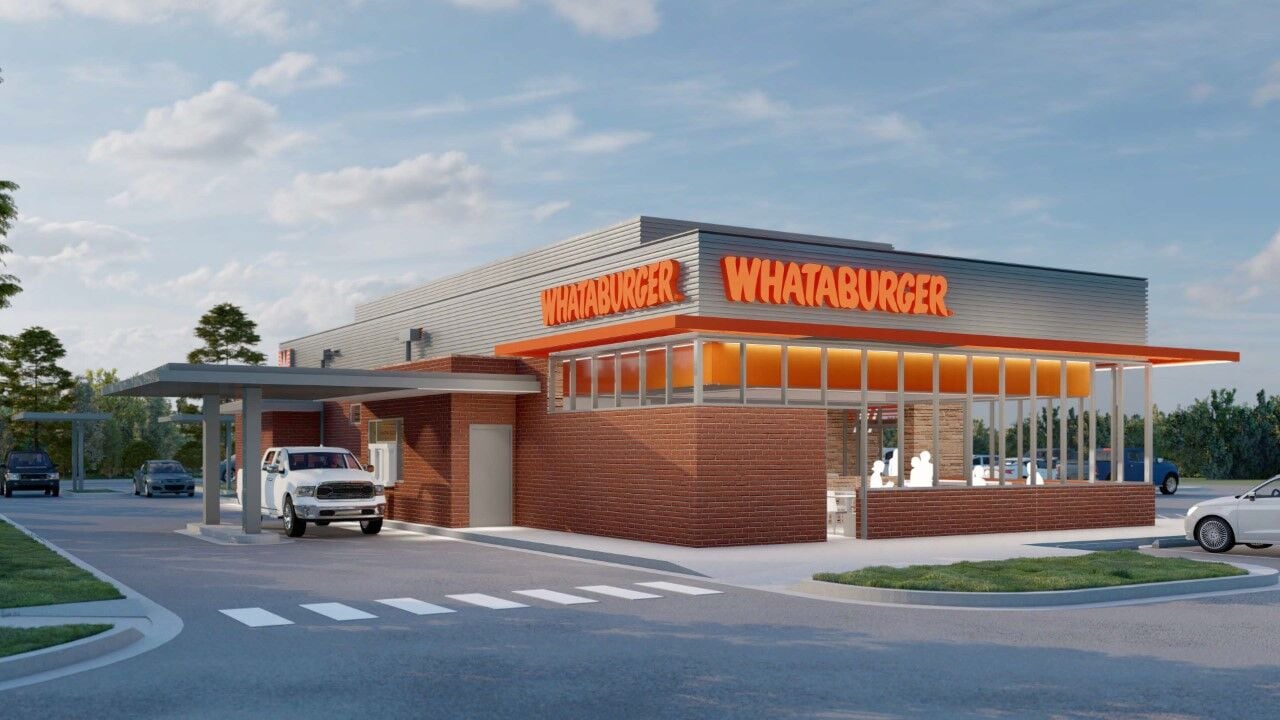 A rendering shows a new Whataburger restaurant that’s scheduled to open by year’s end in the InterQuest Marketplace retail complex, northeast of Interstate 25 and InterQuest Parkway on Colorado Springs’ far north side. 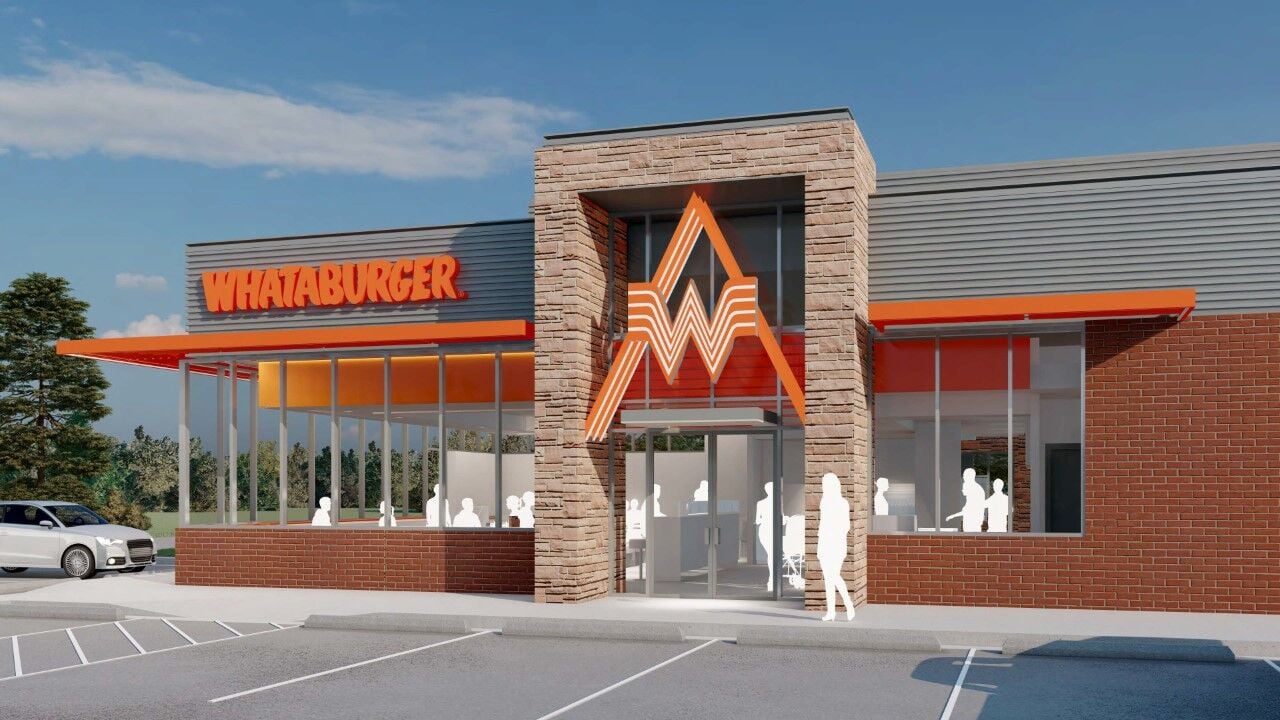 A rendering shows a new Whataburger restaurant that's scheduled to open by year's end in the InterQuest Marketplace retail complex, northeast of Interstate 25 and InterQuest Parkway on Colorado Springs' far north side.

A rendering shows a new Whataburger restaurant that’s scheduled to open by year’s end in the InterQuest Marketplace retail complex, northeast of Interstate 25 and InterQuest Parkway on Colorado Springs’ far north side.

A rendering shows a new Whataburger restaurant that's scheduled to open by year's end in the InterQuest Marketplace retail complex, northeast of Interstate 25 and InterQuest Parkway on Colorado Springs' far north side.

By year's end, local fervent fans of Whataburger should have their cravings satisfied with the chain's first restaurant in Colorado Springs — and it won't be the last.

Texas-based Whataburger, founded 71 years ago and popular for its fresh, made-to-order burgers, broke ground Wednesday for a restaurant expected to open by the end of 2021 in the InterQuest Marketplace shopping center, northeast of Interstate 25 and InterQuest Parkway on the city's far north side.

Whataburger joins In-N-Out, whose first Colorado restaurant opened in November in the Victory Ridge development, southeast of InterQuest and Voyager parkways and a short distance from the Whataburger site. California-based In-N-Out, which has gained legions of fans since its launch in 1948, also built a production and distribution facility in Victory Ridge.

When it opens, Whataburger will add its name to the growing list of restaurants in InterQuest, the booming commercial area that's also home to retailers, hotels, movie theaters, entertainment centers, an indoor water park and hundreds of apartments.

"This is a premier center in the growing end of town and we just gravitated to this site," said William Tamminga, president of BurgerWorks Colorado, a 24-year-old, family run, Texas-based franchisee that will open Whataburger in Colorado Springs. BurgerWorks also operates nine Whataburgers in Texas.

BurgerWorks Colorado has contracted to buy another site east of Powers and Dublin boulevards, in northeast Colorado Springs, where it anticipates opening a second Whataburger in the first half of 2022, Tamminga said.

The franchisee also has purchased a building east of Powers and Constitution Avenue that it's remodeling into offices and an employee training center, he said. Tamminga didn't rule out that a Whataburger restaurant might become part of the building's mix.

BurgerWorks Colorado continues to look for additional restaurant sites, though Tamminga couldn't say at this time how many Whataburgers might open in the Colorado Springs area.

"We hope that eventually you don't have to drive all the way across town to fill your Whataburger craving," Tamminga said.

"There's trade areas that we know that we want to target," he added. "You never know what opportunities may or may not be available. We're just kind of seeing what's out there, but also focused on InterQuest because we want to come into the market in the right way and not only meet, but exceed, everybody's expectations."

Those expectations are rooted in the growth of Whataburger over seven decades.

Businessman Harmon Dobson started Whatatburger in August 1950 as a small roadside stand in Corpus Christi, Texas. It took its name from customers who were so enthralled by the burgers that they exclaimed "what a burger!" after they tasted one, according to the restaurant chain.

Headquartered in San Antonio, Whataburger now has more than 850 restaurants across 10 states, said Joel Griffiths, the chain's vice president of franchising. In recent years, the chain has looked to expand into additional markets.

The chain also prides itself on creating "friendly and hospitable" restaurants for guests, Griffiths said. Colorado Springs appealed to Whataburger as a vibrant community with a rich history, whose military installations echo those in San Antonio, he said.

"It was kind of a natural fit," Griffiths said of Colorado Springs. "We certainly have a lot of rabid fans in Texas, and then that seems to be extended here in the Colorado Springs area."

The new 3,751-square-foot Whataburger will have a drive-thru and employ about 100 full- and part-time employees. Whataburger restaurants are open 24 hours a day, according to the chain's website.

The new Colorado Springs location already is being welcomed by Whataburger fans, including former Texans.

Before saying a prayer as part of Wednesday's groundbreaking, pastor David Grothe of nearby New Life Church said senior pastor Brady Boyd had come to Colorado Springs 14 years ago from Texas with a prayer that Whataburger would follow him.

"The prayer has been answered," Grothe said.