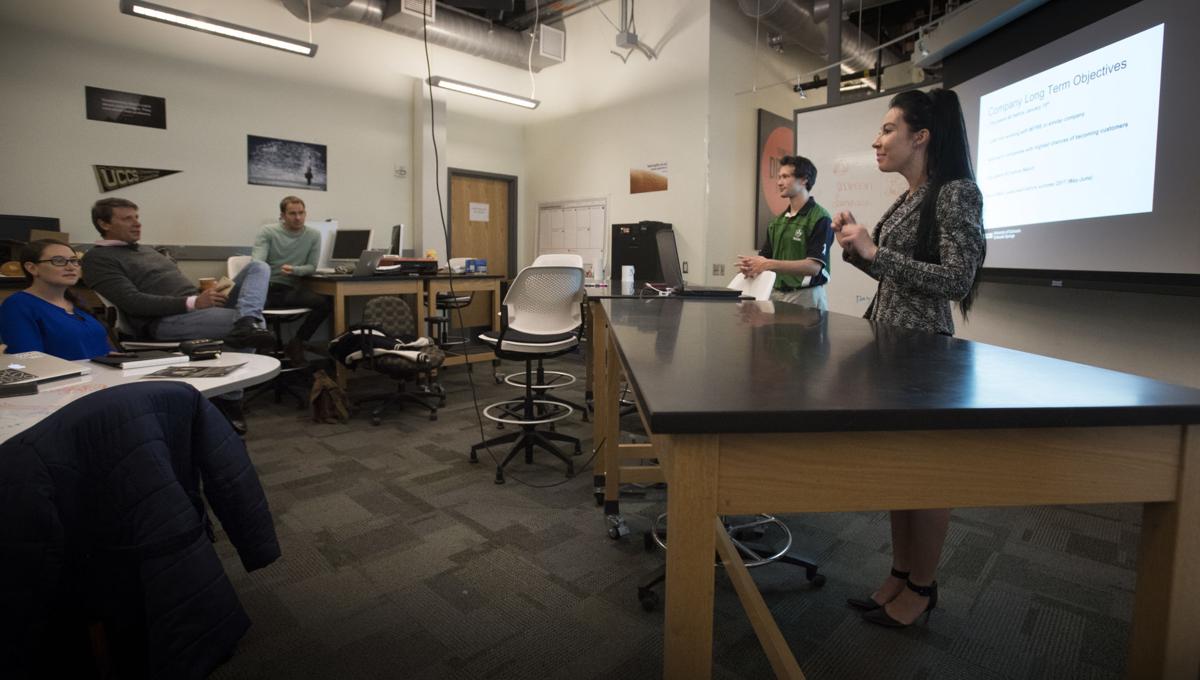 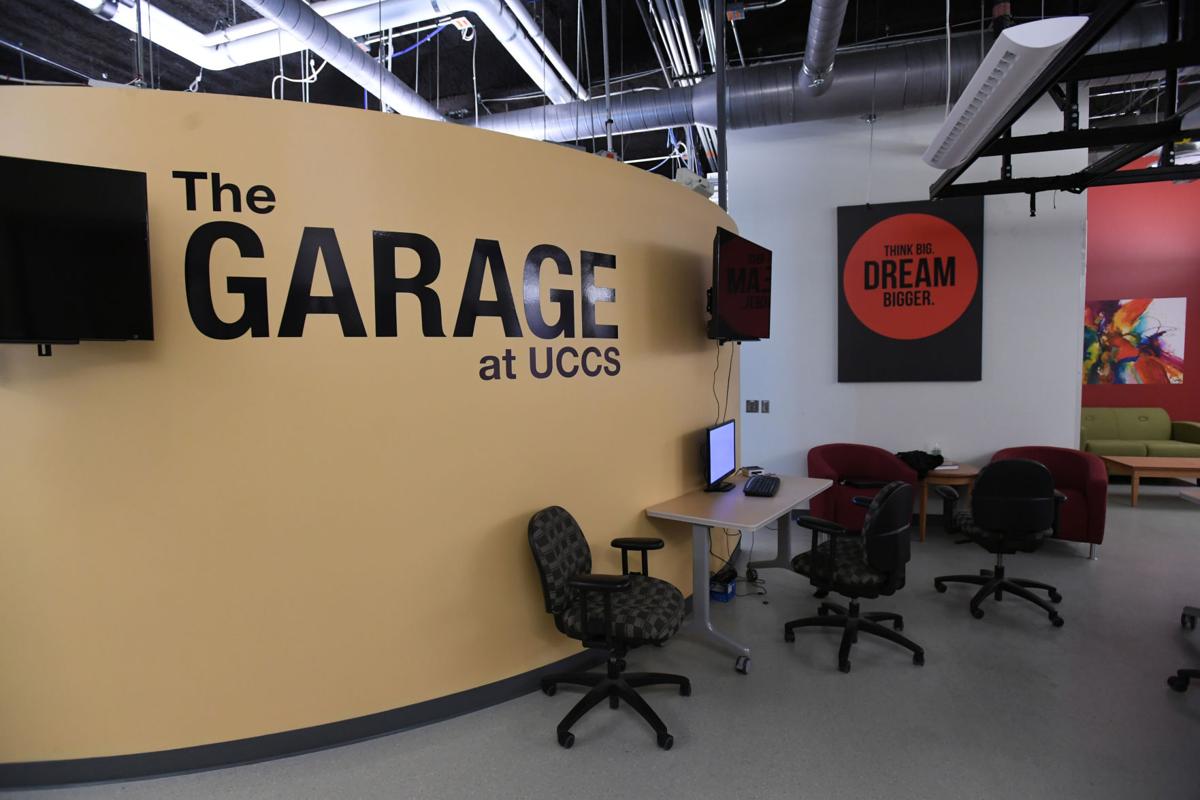 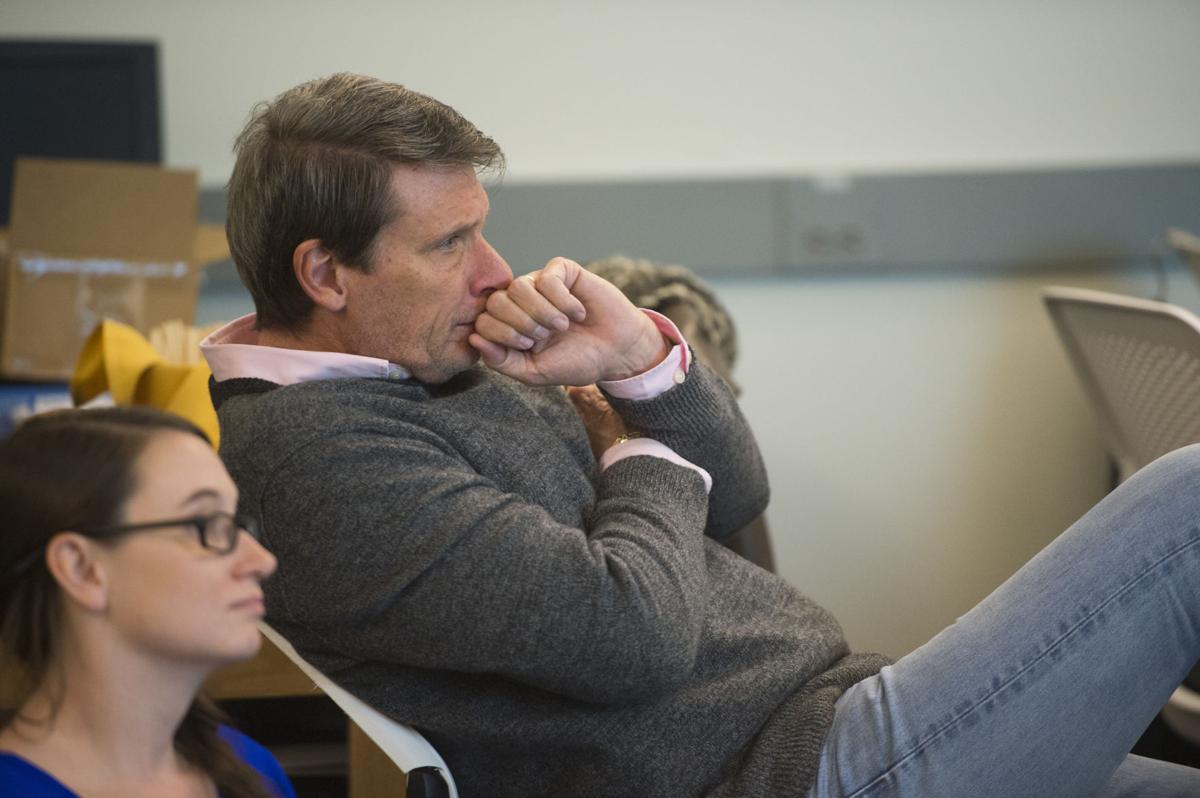 UCCS professor Dr. Tom Duening listens to a pitch from students at "The Garage" Tuesday, November 29, 2016. Duening is El Pomar Chair of Business and Entrepreneurship. Photo by Mark Reis, The Gazette 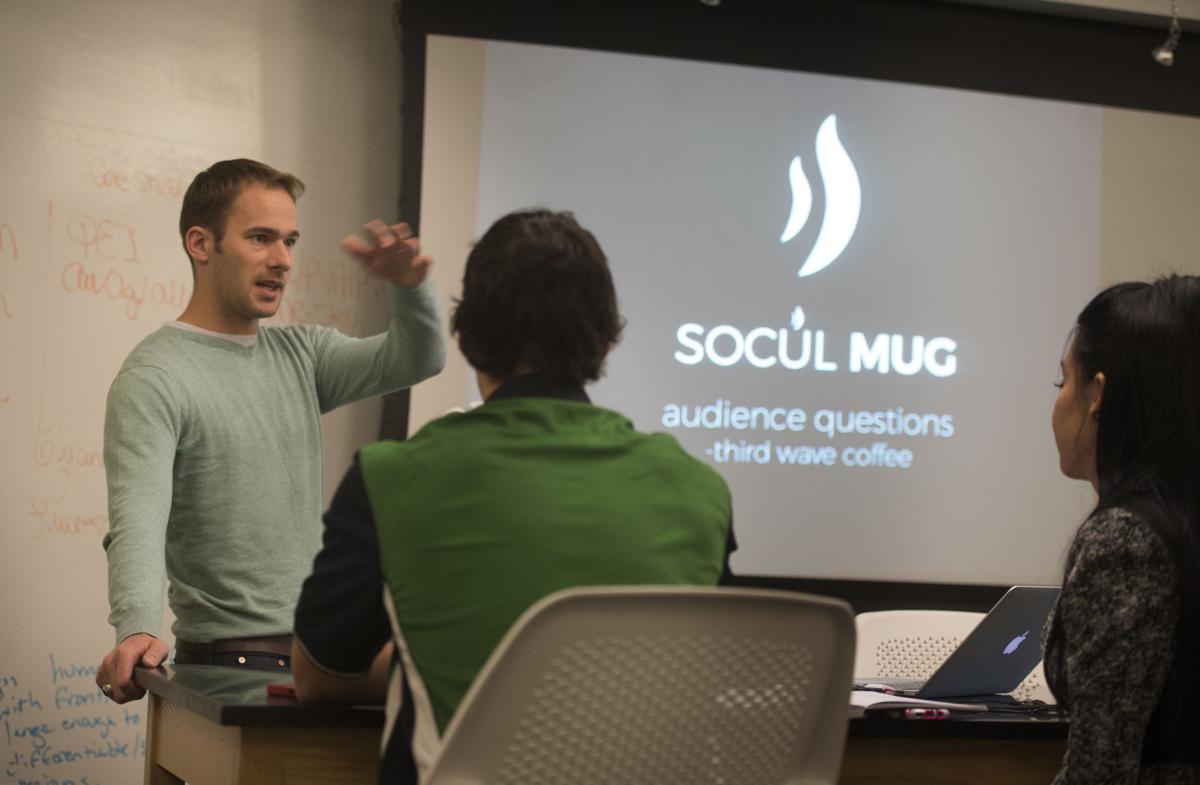 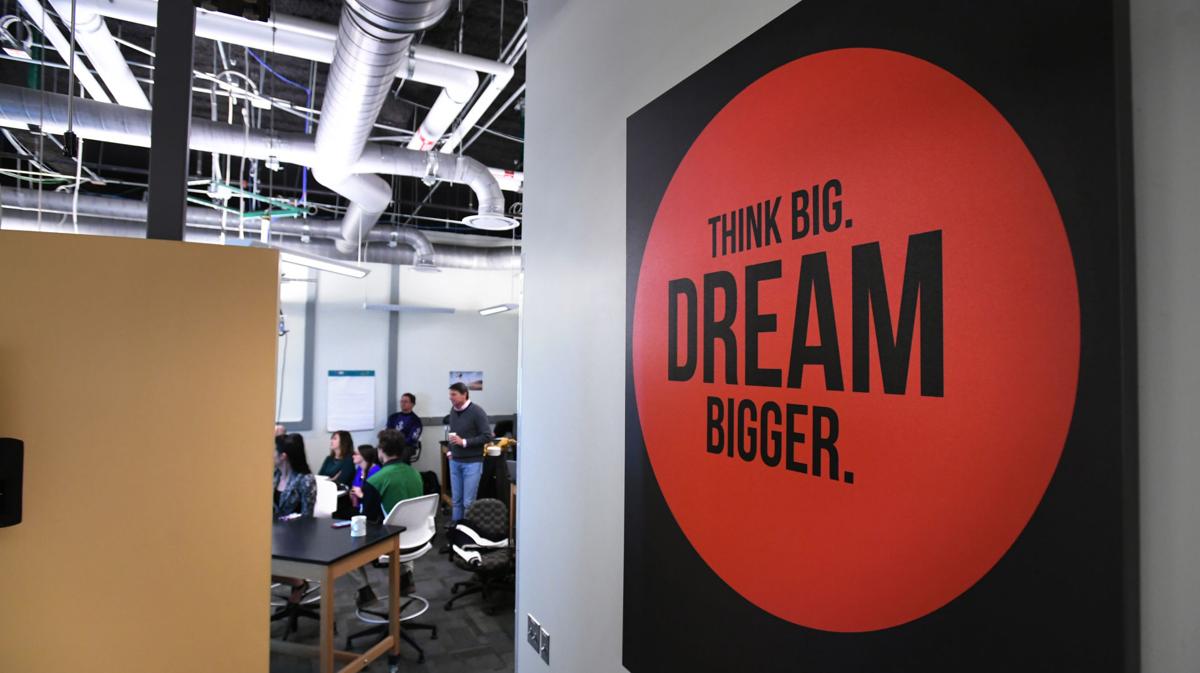 UCCS students make monthly pitches at "The Garage" at UCCS. Photo by Mark Reis, The Gazette

UCCS professor Dr. Tom Duening listens to a pitch from students at "The Garage" Tuesday, November 29, 2016. Duening is El Pomar Chair of Business and Entrepreneurship. Photo by Mark Reis, The Gazette

UCCS students make monthly pitches at "The Garage" at UCCS. Photo by Mark Reis, The Gazette

The University of Colorado at Colorado Springs has opened a laboratory where its student entrepreneurs can wade into the shark tank.

Instead of competing for an investment, six student teams have to show continued progress to stay in The Garage, a space that previously housed a prototyping lab in the school's engineering building that student companies can use to turn their business ideas into companies that generate revenue and profits. The six companies must give monthly progress "pitches" to persuade three faculty members to not replace them with a team with a better idea; two teams have already been replaced in the nine months The Garage has been operating.

"The key to a space like this is to co-locate companies from different industries. They have a spillover effect with the knowledge each management team has about their market, technology and customers that they could not get if they were operating somewhere else on their own," said Tom Duening, one of three UCCS faculty members from the El Pomar Institute for Innovation and Commercialization that operates The Garage. "We are a hybrid between a (startup) accelerator and a coworking space. We also bring in speakers, so it is educational in every sense, and we mentor the teams."

The Garage is open to all UCCS students, but teams must apply through the laboratory's website - garageatuccs.com - by providing details that include basic information such as name, location, date founded and number of employees, social media presence, management team members, target market, customers, product or service, competitors, current funding, past financials and projections, business plan and pitch presentation and video. Three student companies are on the waiting list to replace any of the six now in the program that fail to make adequate progress.

All participants must enroll in an independent study class with one of the three professors during which they work on developing their companies, and their grade is based on how much progress they make, Duening said. Students are not required to give the school a stake in the company, nor do they have to pay royalties on sales, he said.

The six companies are spread across a variety of industries and are in different stages of development. They include:

- Lot Spot Inc., a team of six current and former UCCS students, is developing a method to determine whether parking lots have available spaces and hopes to win a contract with UCCS to provide its service to students, faculty, employees and campus visitors, but it must first improve the accuracy of its system. The company won a national student business plan competition in April at Chapman University in California that includes $5,000 in cash, a scholarship to an entrepreneur boot camp and a venture capital fund investment that the founders turned down because "it didn't fit our needs."

- Nanometa was started by doctoral student in applied physics Jewell Anne Hartman, international business and engineering technology student Jeremy Nelson and molecular biology student Simon Marinelli and is developing materials that have the ability to bend light in the opposite direction of traditional materials, called negative refraction, for use in biomedical, defense and other industries. The company plans to continue researching problems related to nanotechnology for development into commercial products.

- SOCÜL LLC was started by Nate Thuli and Patrick Lazenby, both veterans and master of business administration candidates at UCCS, to develop a ceramic mug outfitted with a heating coil designed to keep coffee served at high-end coffee shops hot for up to two hours. The company plans a Kickstarter campaign in January and is still working on getting the software to automatically operate the cup without human control. They must finish development by March so the product is ready for introduction this spring when Thuli graduates and can be sold to the coffee shops by fall.

- Peak Social Insights was started by Taylor Rodriguez and Sheelin Weed, both undergraduate students in the College of Business, to offer digital marketing, social media marketing, graphic design and website development and design services to small businesses, but it has found many of those firms can't afford its services. The company is developing a workshop to train small businesses on digital marketing and social media and also is developing contacts to offer its services to companies in the cybersecurity industry and those bidding on government contracts.

- QuikCycle LLC was started by Chris Breeze, Preston Hare and Justin Hein, all undergraduate College of Business students, to rent bicycles in downtown Colorado Springs and at Colorado College on a short-term basis, and it will soon shift to renting the bikes through hotels since it generated little revenue during a two-month test of renting directly to consumers. The company must still iron out the details of how it will work with the hotels - which could be either a service or a partnership - but hopes to approach hotels with its plans in the next month or so.

- Bear Hands Toys was started by Tucker Walsh, Graham Espenlaub and Benjamin Calvillo Reveley, all UCCS engineering students, and it began developing a game that involved shooting pingpong balls, but it has put that concept on hold while it develops a game that combines drones and lasers. The company is still developing a prototype.

During their required presentations Tuesday to the faculty members - which include Duening, Terry Boult and Michael Larson - five of the six companies focused on milestones they had completed and those that remain to be completed. Bear Hands plans to make its presentation this month. Duening said SOCÜL is the closest to graduating from the program and becoming a self-sustaining company, but Peak Social Insights is already generating revenue, and Lot Spot is "close" to signing a contract with UCCS to offer the service in its two parking garages and many surface lots.

Much of the feedback Boult, Duening and Larson gave to the student entrepreneurs was aimed at helping them avoid a common difficulty many startups face - developing a solution in search of a problem - making potential customers and a large enough target market difficult to find. They also counseled several of the companies to get their products to market earlier, even if that meant introducing a product that wasn't quite perfect, and focus less on the mechanics of their technology and more on the business applications for that technology.

Two companies left the program, Aztlan Customs LLC, which was developing custom-made fishing poles, and Narrativ Inc., which was developing a mobile application that would have allowed users to read, contribute to and rate sections of stories created by others. Aztlan founder Danny Morales said he put the company on hold after landing a job with another startup. Despite winning two business plan competitions, Narrativ struggled to find customers and eventually shifted its storytelling efforts to the wedding industry before shutting down this year.