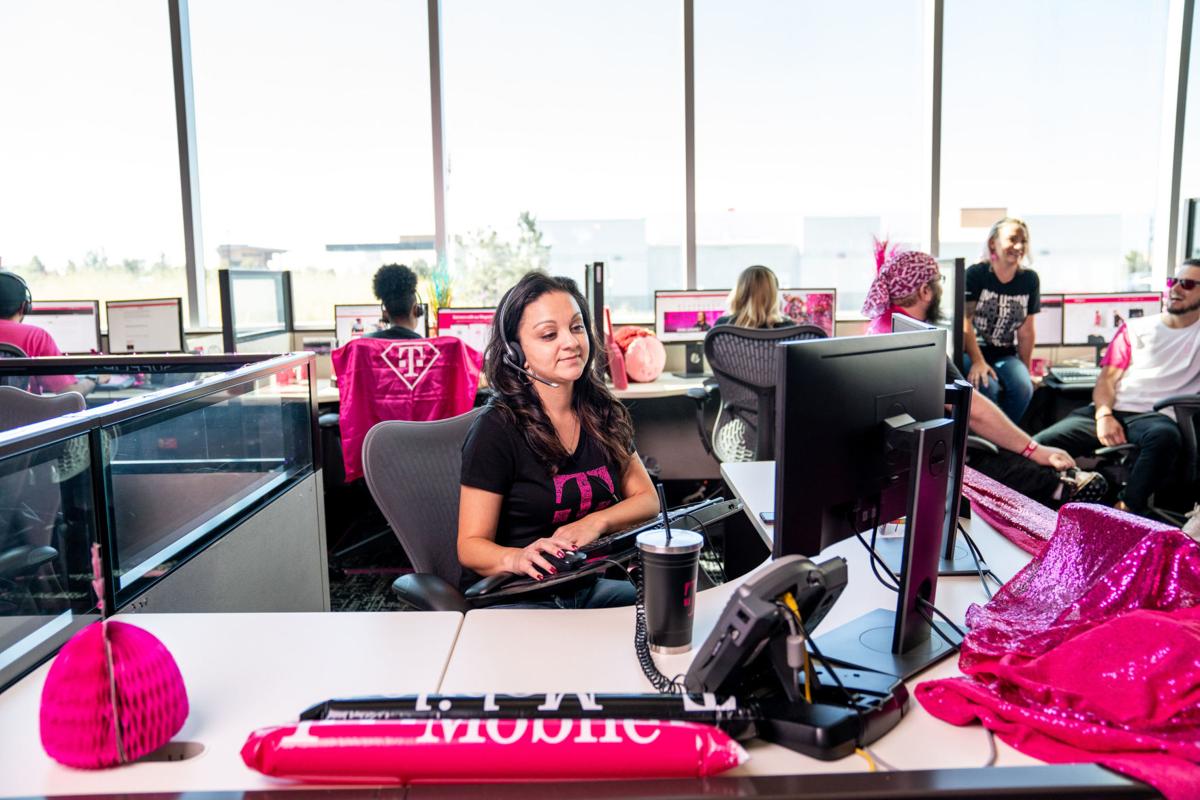 Kendra Martinez, a customer resolution expert at T-Mobile’s Colorado Springs call center, talks to a customer from her desk before the coronavirus pandemic prompted the company to shift 90% of its workforce to remote working from home. 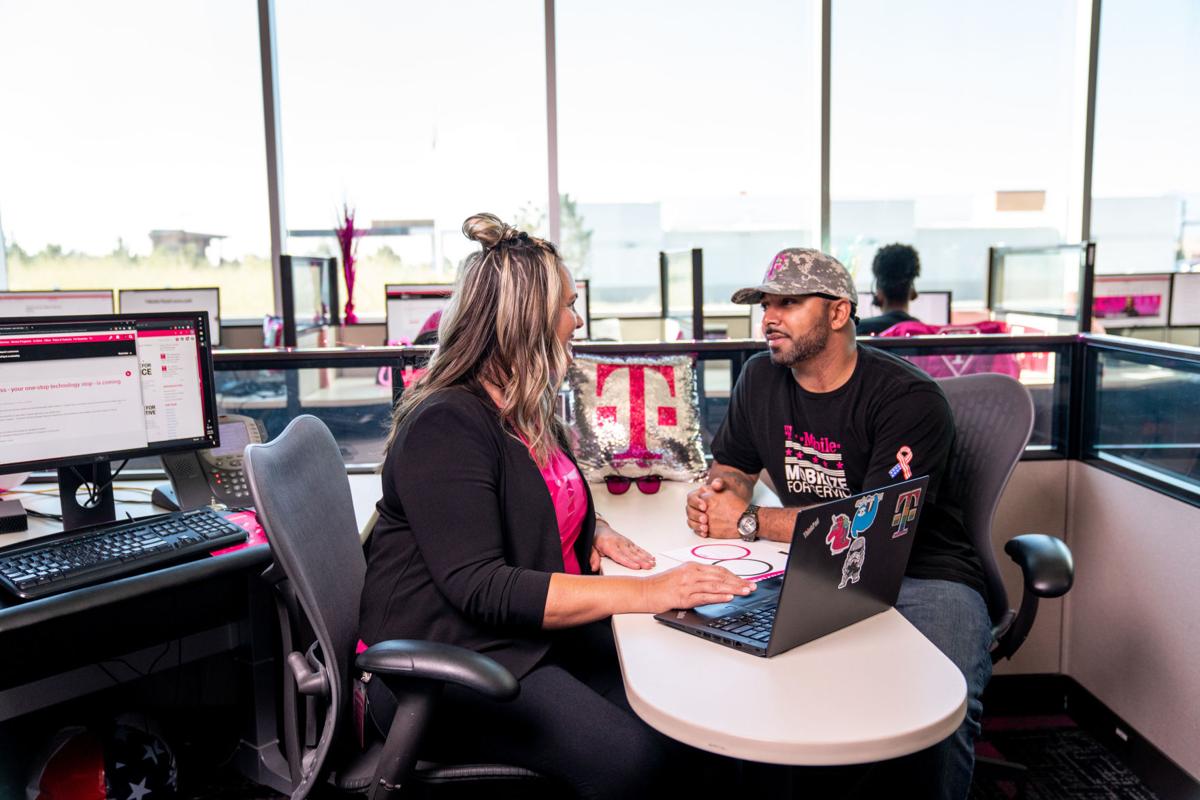 T-Mobile call center agents Jen Tuggle and Thomas Williams talk at their desks in the company's Colorado Springs call center before the coronavirus pandemic prompted the company to shift 90% of its workforce to remote working from home. T-Mobile made the move as Gov. Jared Polis ordered Colorado residents to stay in their homes to prevent the spread of the virus. 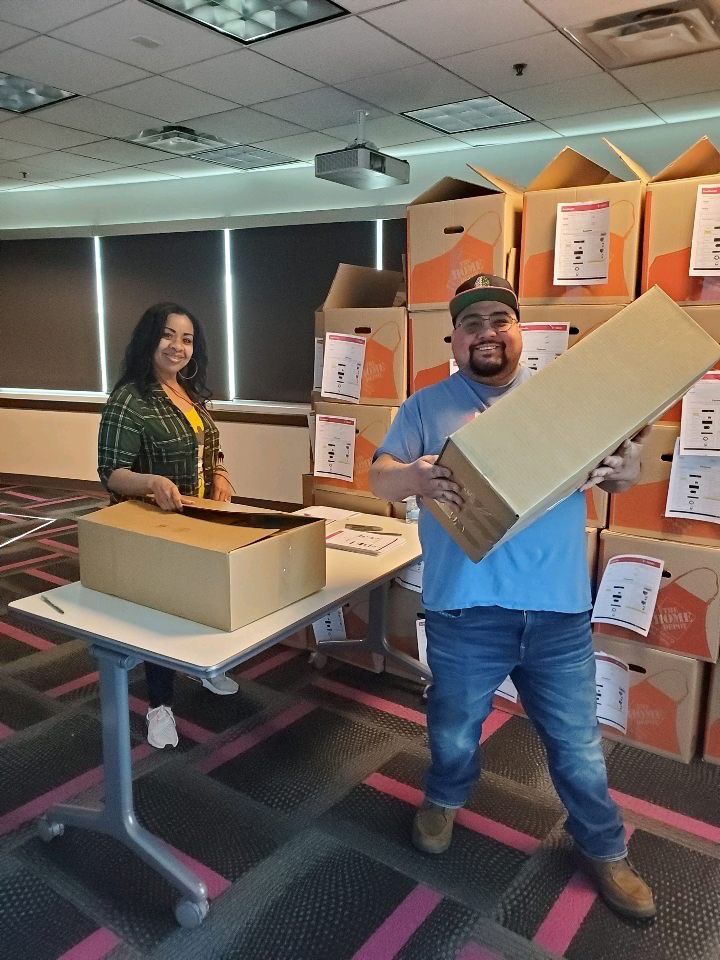 T-Mobile employees Tammie Williams and Andy Hernandez get boxes containing computers and other gear agents from the company's Colorado Springs call center needed to start working from home. T-Mobile shifted 90% of its work force to remote working from home as Gov. Jared Polis ordered Colorado residents to stay in their homes to prevent the spread of the virus. 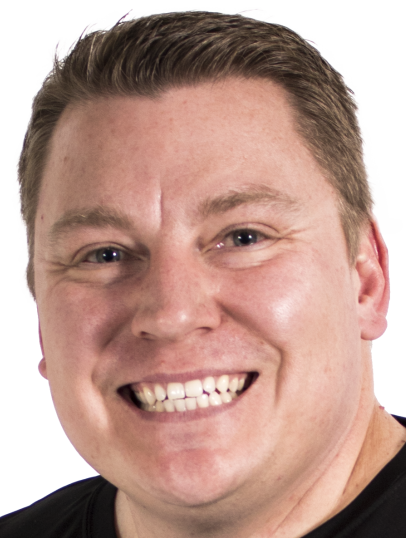 Kendra Martinez, a customer resolution expert at T-Mobile’s Colorado Springs call center, talks to a customer from her desk before the coronavirus pandemic prompted the company to shift 90% of its workforce to remote working from home.

T-Mobile call center agents Jen Tuggle and Thomas Williams talk at their desks in the company's Colorado Springs call center before the coronavirus pandemic prompted the company to shift 90% of its workforce to remote working from home. T-Mobile made the move as Gov. Jared Polis ordered Colorado residents to stay in their homes to prevent the spread of the virus.

T-Mobile employees Tammie Williams and Andy Hernandez get boxes containing computers and other gear agents from the company's Colorado Springs call center needed to start working from home. T-Mobile shifted 90% of its work force to remote working from home as Gov. Jared Polis ordered Colorado residents to stay in their homes to prevent the spread of the virus.

It’s one of hundreds of Colorado Springs employers that had to move from the office to the couch in a few days as the virus hit the state. Banks, defense contractors and software firms also made the shift.

But the wireless giant might have had one of the more complex moves as it reshuffled customer service to keep homebound customers connected as its huge workforce faced unfamiliar conditions.

In less than two weeks, what started as a voluntary move for older and other at-risk workers became mandatory as Gov. Jared Polis ordered employers to move at least half of their workers to home, then required state residents to remain in their homes except to buy food or seek health care. At the same time, T-Mobile customers were spending an hour or more on hold waiting to talk to an agent for technical support or pay their bill.

Moving employees to taking calls at home wasn’t as easy as giving them a company cellphone. Agents at T-Mobile’s center in the Briargate neighborhood work in teams of 35 people. The teams are assigned to customers from a specific region so they become familiar with their needs and collaborate with each other to find a solution, said Rob Sisler, director of the Colorado Springs center.

“Our first goal was to get (employees) home with their families as schools, day care centers and other facilities were closing. But we also were thinking about how to support our customers at the same time,” Sisler said. “We couldn’t just send them home with a laptop. We had to figure out how to get them the same workspace at home as they had at work.”

That meant sanitizing each employee’s company equipment — a desktop computer, two 22-inch computer monitors, a keyboard, mouse, headset and surge protector — and putting it in a box with detailed instructions on how to set up a virtual private network needed to route the calls to the assigned team.

Employees also needed to make sure they had a fast-enough internet connection — at least 15 megabits per second.

While a few employees moved in the first two weeks to working from home, most completed the process between March 24 and March 27, when the stay-at-home order took hold. Sisler said most employees picked up their equipment from tents outside the call center and a few had it delivered to their homes and left at the front door.

About three-fourths of the 860 employees were working from home after four days and 85% were doing so within 10 days, he said.

About 10% of the center’s employees chose to work from the office, many because they don’t have access to fast-enough internet service or lacked a good place to work from home, Sisler said.

Those employees were spread through the 60,000-square-foot center’s remaining space with just two employees and a supervisor in each pod with an average distance of about 30 feet between them.

“We’ve had very minimal issues working from home. We sent employees home with a one-page guide to walk them though the process, individual virtual sessions for additional help and had a war room set up (with the information technology department) to help them if they had issues,” Sisler said.

“The only real issue we see now is if the internet goes down at their home, then they are unable to work.”

Colorado Springs' No. 1-rated workplace has a familiar ring

T-Mobile had to repeat the process for more than 15,000 employees at 16 other call centers during a three-week period, including 1,100 workers at two centers in New Mexico who had to move home in 48 hours and employees of call centers at Sprint after its April 1 merger with T-Mobile.

The company also moved its training programs from in-person to online.

Managers also had to change the way they supervised employees. The system had to be capable of letting managers take over a customer call, or an employee’s work station if an agent couldn’t resolve the customer’s issue. Although Sisler had managed remote employees before, most of his midlevel managers had no experience with supervising in that environment.

The company also took extra efforts to maintain its upbeat and fun-filled corporate culture, such as delivering incentive prizes to employees’ homes or singing the “Brady Bunch” television show theme song during a Webex meeting since everyone’s screen looked like the show’s opening scene displaying each actor in a separate video box.

While T-Mobile eventually wants employees to return to the center, Sisler said the company isn’t in any hurry to bring them back. The schedule will depend on restrictions in the multiple states where the centers are, some of which remain under stay-at-home orders.

The company also plans to make sure employees remain at least 6 feet apart to comply with social-distancing requirements, he said.

“We are not in a hurry; we don’t have to get back into this building ASAP,” Sisler said. “We are planning on working through May with this process in place, and we have increased cleaning and sanitation for when we begin to bring back employees and they can be set up for success as well as possible. We feel comfortable with the environment we have set up. It is not ideal; our team of experts concept works best when we are in our building so our long-term goal is to bring them back.”

That might be a while — Sisler said the company can accommodate about 60% of the center’s employees in the building while maintaining social distancing, so some employees might be working from home for a long time. He said the company also needs to make sure employees can get care for children when they are not in school.

Several other major Colorado Springs employers said they are taking a slow and deliberate approach to bringing employees back to the office. At least one, Colorado Springs-based defense contractor Braxton Technologies, has no plans to bring its 450 employees, including 175 in Colorado Springs, back to its offices, said Kevin O’Neil, the company’s president and CEO of its parent, The O’Neil Group.

“We are trying to maintain 100% work from home, though we have a handful of outliers that want to work from the office,” O’Neil said.

“We believe there will be a second wave of COVID-19 cases, so we are set up to work remotely for the foreseeable future. Fortunately, we were set up to allow people to work from home on snow days, so our transition was seamless with no hiccups.”

Braxton began moving employees home in early March, anticipating state restrictions that would come a few weeks later. O’Neil said the company had to buy more laptops, help employees upgrade their home internet connections and reroute switchboard calls to the home of its receptionist, but had no major issues during or after the move.

Colorado Springs-based Cherwell Software has more than 95% of its 500 employees, including 200 locally, working from home, using company laptops, said Ann Boyd, the company’s vice president of corporate communications. The company began the move in mid-March and hasn’t had complaints about disruptions in the services it offers customers in the two months since then, she said.

“We will be taking a conservative approach; we are in no rush” to return employees to the office, Boyd said.

“We will proceed with caution, based on regulatory requirements.” Some operations, including product support and installing and customizing Cherwell software for clients, worked remotely and will continue to operate that way, she said.

Ent Credit Union has started voluntarily moving employees back to its offices but is restricting in-office workers by departments to 25% of staff to maintain social distancing, said Jennifer Sussman, Ent’s chief marketing officer.

That doesn’t include branches and other operations where employees directly serve customers, though branch lobbies are still open to customers by appointment only.

“We are looking at a phased return,” Sussman said. “We will look at how this first group works and make a decision for June. We will watch for the governor’s orders, evaluate and do what we feel is safe for our staff and customers.

Capacity of conference and break rooms is restricted, and employees working in the office are required to wear masks when they interact with others, either colleagues or customers, she said.

Nearly all of the 2,000 employees at insurance giant Progressive’s Colorado Springs campus, which includes a call center, data center and information technology operation, are working from home and will continue to do so even as states allow workers to return to the office, said Jeff Sibel, a company spokesman near Cleveland.

“Our priority is to ensure all of our employees can continue to do their jobs safely. As states begin to reopen and some people head back to work, we’ll continue our work-from-home approach wherever possible,” Sibel said.

“We’ll be watching and learning from the experiences of other companies to ensure our return to work plans — when they do happen — run a smoothly and safely as possible.”

Colorado Springs-area gas prices have started to tick upward after weeks of steady declines tied to the COVID-19 pandemic.