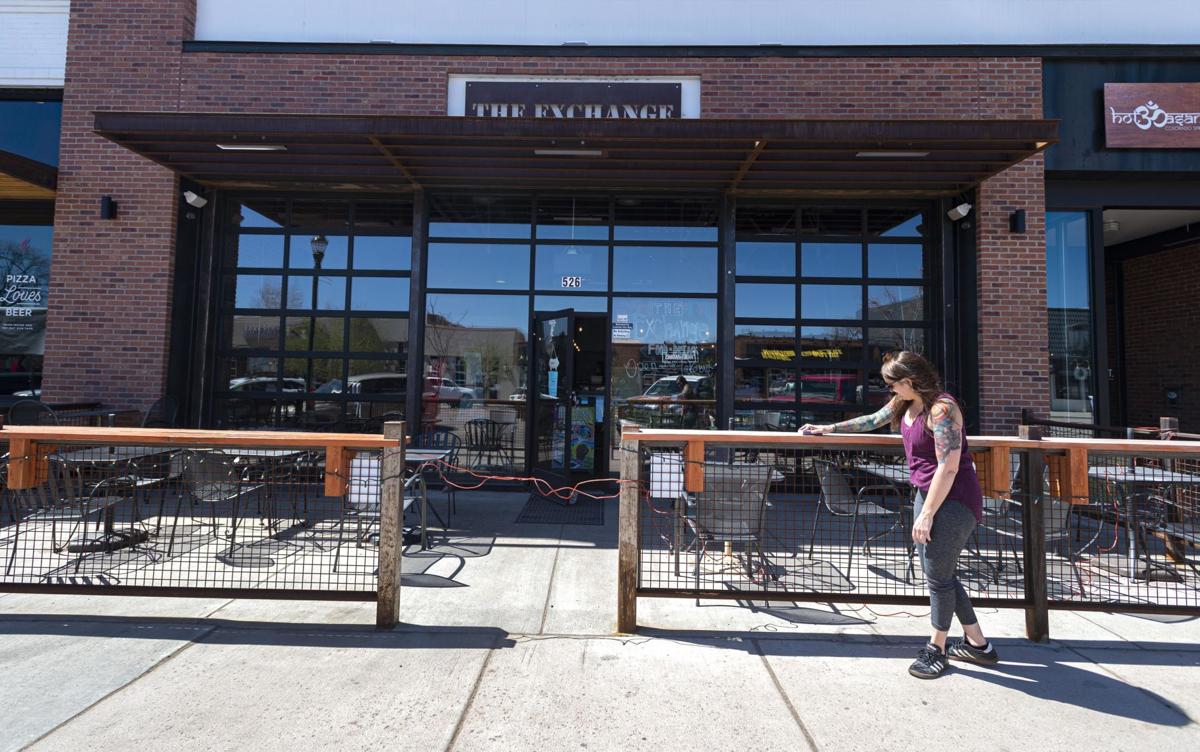 Co-owner Kim Outlaw sands the railings Tuesday outside The Exchange in Colorado Spring. Her partner, Andy Schlesinger, and she made the tough decision to shut down during the COVID-19 virus rather than offer curbside service. Outlaw has been painting and cleaning the restaurant while Scheslinger has been working on a new menu. 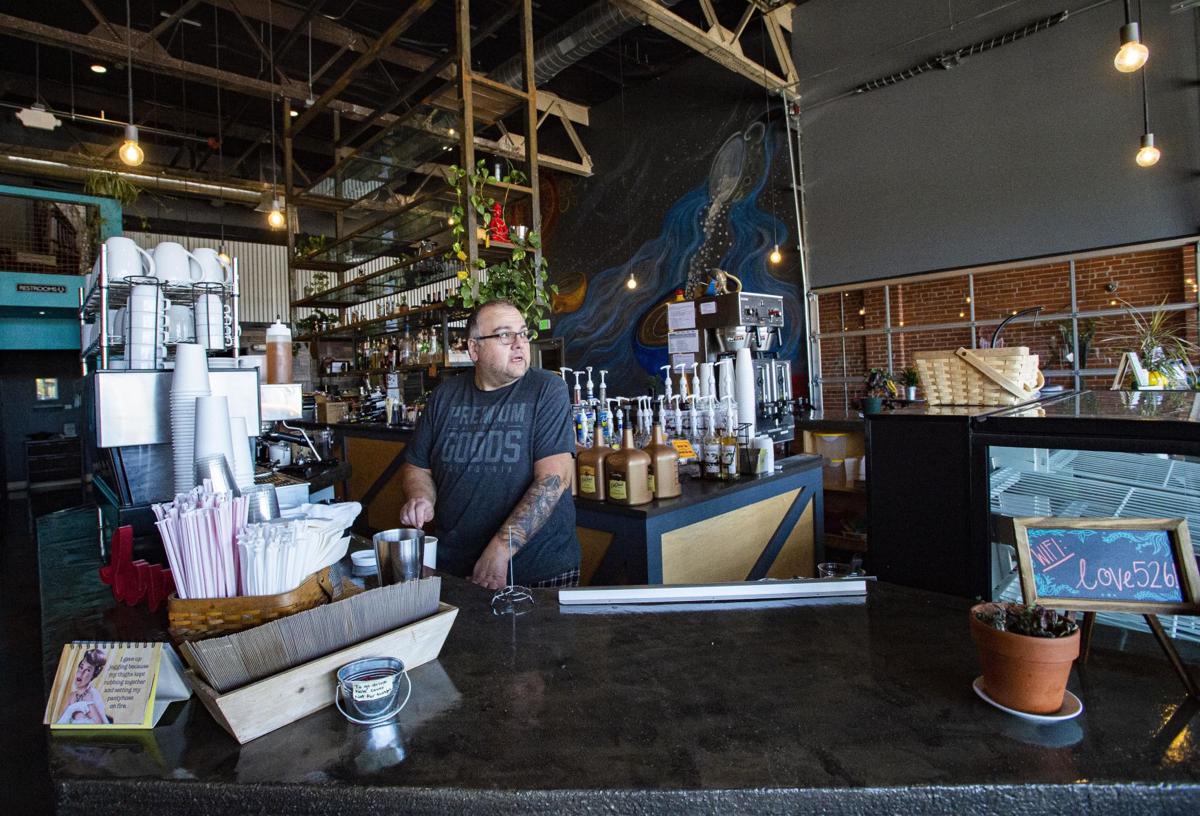 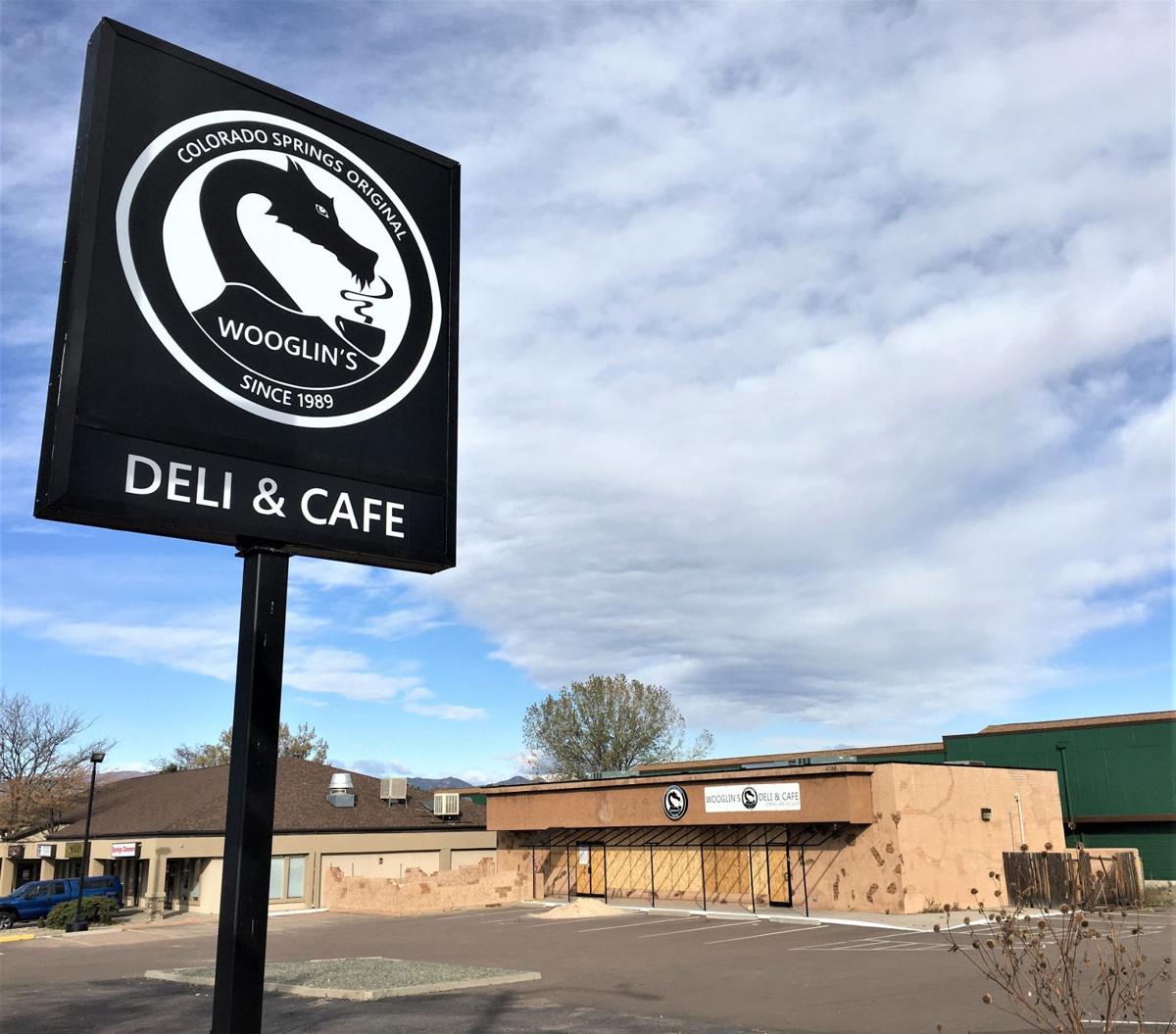 Wooglin’s Deli & Cafe is targeting a Dec. 2 opening for its second Colorado Springs location, in a building that formerly housed a Borriello Brothers pizza restaurant at Barnes Road and Oro Blanco Drive on the city’s northeast side. Wooglin’s is closing its longtime Tejon Street location to make room for Colorado College’s new Robson Arena, but will return and occupy space inside the venue when it opens in 2021. 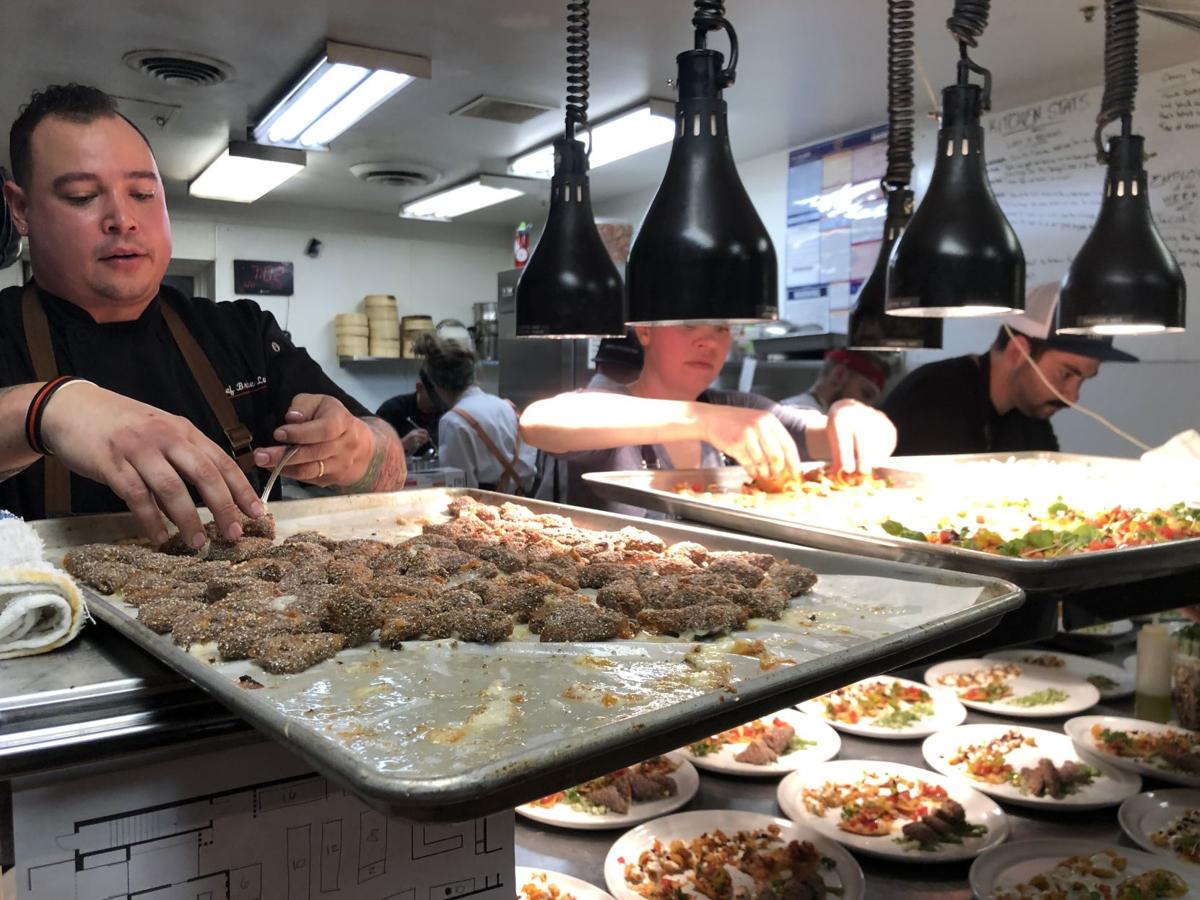 Co-owner Kim Outlaw sands the railings Tuesday outside The Exchange in Colorado Spring. Her partner, Andy Schlesinger, and she made the tough decision to shut down during the COVID-19 virus rather than offer curbside service. Outlaw has been painting and cleaning the restaurant while Scheslinger has been working on a new menu.

Wooglin’s Deli & Cafe is targeting a Dec. 2 opening for its second Colorado Springs location, in a building that formerly housed a Borriello Brothers pizza restaurant at Barnes Road and Oro Blanco Drive on the city’s northeast side. Wooglin’s is closing its longtime Tejon Street location to make room for Colorado College’s new Robson Arena, but will return and occupy space inside the venue when it opens in 2021.

Stay open on a limited basis and hope that carryout and delivery sales will pay the bills?

Or temporarily shutter in anticipation that customers will return once the doors reopen?

It’s a gut-wrenching decision for many Colorado Springs-area restaurants, but one they’ve been forced to make as they wrestle with how to survive the COVID-19 pandemic.

Their dining rooms have been closed since March 17, a day after Gov. Jared Polis ordered a 30-day ban on dine-in service throughout Colorado. On March 25, Polis issued a stay-at-home order meant to keep Colorado residents inside their houses and apartments except for trips to groceries, auto repair shops, hardware stores and other critical businesses.

- FULL COVERAGE: Updates and analysis on the pandemic from around Colorado.

Both of the governor’s actions, meant to slow the spread of the coronavirus, have hit the restaurant industry hard. The Colorado Restaurant Association says three out of four restaurants in the state are independently owned and operated; many get by on razor-thin profit margins in a highly competitive industry. Every customer is important.

Since that survey, the government passed a $2 trillion stimulus bill that includes loans designed to help keep restaurants and other businesses afloat.

“Restaurants that can access the Paycheck Protection Program and Economic Injury Disaster Loans (stimulus package assistance programs) may be able to hold on a little longer,” Sonia Riggs, the Restaurant Association’s CEO, said via email.

“These weren’t yet enacted when we surveyed, so that could change the data some. This is why it’s critical that this industry continue to get relief from all levels of government. It’s a matter of survival.”

Polis’ stay-at-home order, originally set to end Saturday, has been extended until April 26, and restaurant dining rooms will remain closed until at least that time, according to the Restaurant Association.

After that, it’s not clear what will happen with restaurants; state officials might look at a gradual reopening of their dining rooms, such as initially limiting their seating capacities, the association says.

For now, some restaurants are continuing to offer curbside, carryout and delivery service; others have closed temporarily until they can reopen their dining rooms.

What were the reasons behind their decisions? Here’s what some restaurants had to say:

Majority owner Andy Schlesinger and partner Kim Outlaw launched carryout, curbside pickup and delivery after the governor’s order to close dining rooms. But they announced March 27 they were closing temporarily.

“Even though we were making some money, as a small business, usually you’re paying yesterday’s bills today,” Schlesinger said.

“Small businesses are just continually doing that. We felt we were going to get deeper in the hole, No. 1. We wanted to be strong enough to be able to survive and thrive after this is all over.”

Schlesinger said he had “a few bucks tucked away in the bank for a rainy day,” but didn’t want to deplete that stash and wanted to be sure he could buy food when it came time to reopen his doors.

Working a scaled-back operation also was fraught with stress — whether it was missing their customers, looking out at an empty dining room or not being able to keep their 19 employees working, Schlesinger said.

“It hurts us not to see all of them,” Schlesinger said of their employees. “And it bothers us, having to choose, ‘OK, who are we going to give these measly four hours to?’ ... It bothers us having to choose. How do you choose when you love them all?”

Outlaw feared that she and Schlesinger also were candidates for burnout, he said. As a result, they’ve closed for now. They’re staying busy, however, painting walls, touching up scuffed tables and turning a storage room into an office.

“If I get money from the government, and they say they want me to open tomorrow, I will reopen tomorrow even if it’s just to pay them (employees) to bake food for the local hospitals and to donate it,” Schlesinger said. “As long as I can have an excuse to pay these people, I will put them back on the payroll immediately. They need to pay their bills. We worry about that.”

Owner Kelvin Thorne had gone through crazy times before the onset of the COVID-19 pandemic.

Wooglin’s had been a popular dining spot for 30 years just south of Colorado College, serving students, faculty members and downtown business people. But the construction of the college’s Robson Arena required the demolition of the building occupied by Wooglin’s and a handful of other businesses.

Thorne moved Wooglin’s to a vacant building at Barnes and Oro Blanco Drive that had been occupied by a pizza restaurant. The new Wooglin’s opened in December.

“It’s kind of crazy,” Thorne said “We moved and reopened and all that. We’ve been in a constant state of flux since November when we closed.”

Wooglin’s was establishing its brand at its new location when the pandemic hit, he said. College students and customers familiar with the restaurant’s former location had been making the trek to the city’s northeast side, while nearby residents also were learning of Wooglin’s bakery items, sandwiches and other menu favorites, Thorne said.

With everything Wooglin’s had gone through with its relocation, Thorne said there was no question about staying open after the governor’s order to close dining rooms. Two of his longtime, experienced employees — who now have a stake in the business — were committed to staying open.

“We didn’t even give it a second thought,” Thorne said. “We were going to find a way to make it work. The neighborhood’s been embracing us. Having a homemade product is very helpful.”

“Being that we went through so much getting open, it was like, we’re going to do whatever we’ve got to do to make it work.”

The restaurant’s location at Barnes and Oro Blanco has its own parking lot, which makes serving carryout customers easier; the downtown location, which relied on metered parking around the building, would have been a different challenge, Thorne said.

He laid off about half of his 20 employees. But Thorne said he’s set a target for daily sales and has been hitting those numbers. He has applied for every assistance program available under the federal stimulus bill.

“We will make this work. And we can come out of this, all of us together, we’re only going to be stronger.”

Owner Brother Luck, a popular Colorado Springs restaurateur, operated curbside service at his restaurants for the first few weeks after Polis’ order that closed dining rooms. Doing so allowed the restaurants to generate sales and revenue for the benefit of employees and vendors who needed to be paid.

For one thing, carryout wasn’t the same, he said.

“As much as I love how much we were able to continue to serve the community ... I want to make sure we’re delivering the standards and the quality that we’re known for. Putting food in a to-go box is completely different than plating something in a restaurant.”

Protecting the health of customers, employees and the community was another primary concern, he said. Talking with people, handling credit cards and money and other customer interactions are part of doing business at a restaurant.

“There’s a lot of movement there,” Luck said. “The constant thing that was running through my mind was why are we risking getting our people sick or spreading something?”

Closing now will allow him to position the restaurants financially for a return, he said. Like others, he’s applying for loans under the stimulus bill.

“We’ve just got to ride this out,” he added. “We’re only talking a couple of weeks.”

For Nana’s Kitchen, the decision to remain open came down to location, said manager Erin Savel.

The Falcon area outside Colorado Springs is relatively small, and Nana’s owners wanted to continue to serve the community, she said.

“We have loyal customers, regulars here at Nana’s, and we didn’t want to not provide them with the home cooking and stuff that they like,” Savel said. “That was basically it.”

The restaurant continues to offer its full menu but has shortened its hours slightly; it opens at 7 a.m. and closes an hour earlier than before at 1 p.m., Savel said.

The 15-person staff is down to about six or seven, and employees rotate through the restaurant so that everybody gets a shift and gets work, she said. Servers might deliver food, the same thing Savel was doing Wednesday.

Business has been fairly good under the circumstances, she said.

“We have slow days, and we have days that sort of carry us to the next week,” Savel said. “It’s hit or miss right now for us.”

- By The Numbers: Coronavirus in Colorado.

Will our pets get us sick from coronavirus? Veterinarians weigh in

The coronavirus pandemic is having a predictably damaging effect on Colorado Springs-area professional service firms, retailers, restaurants a…