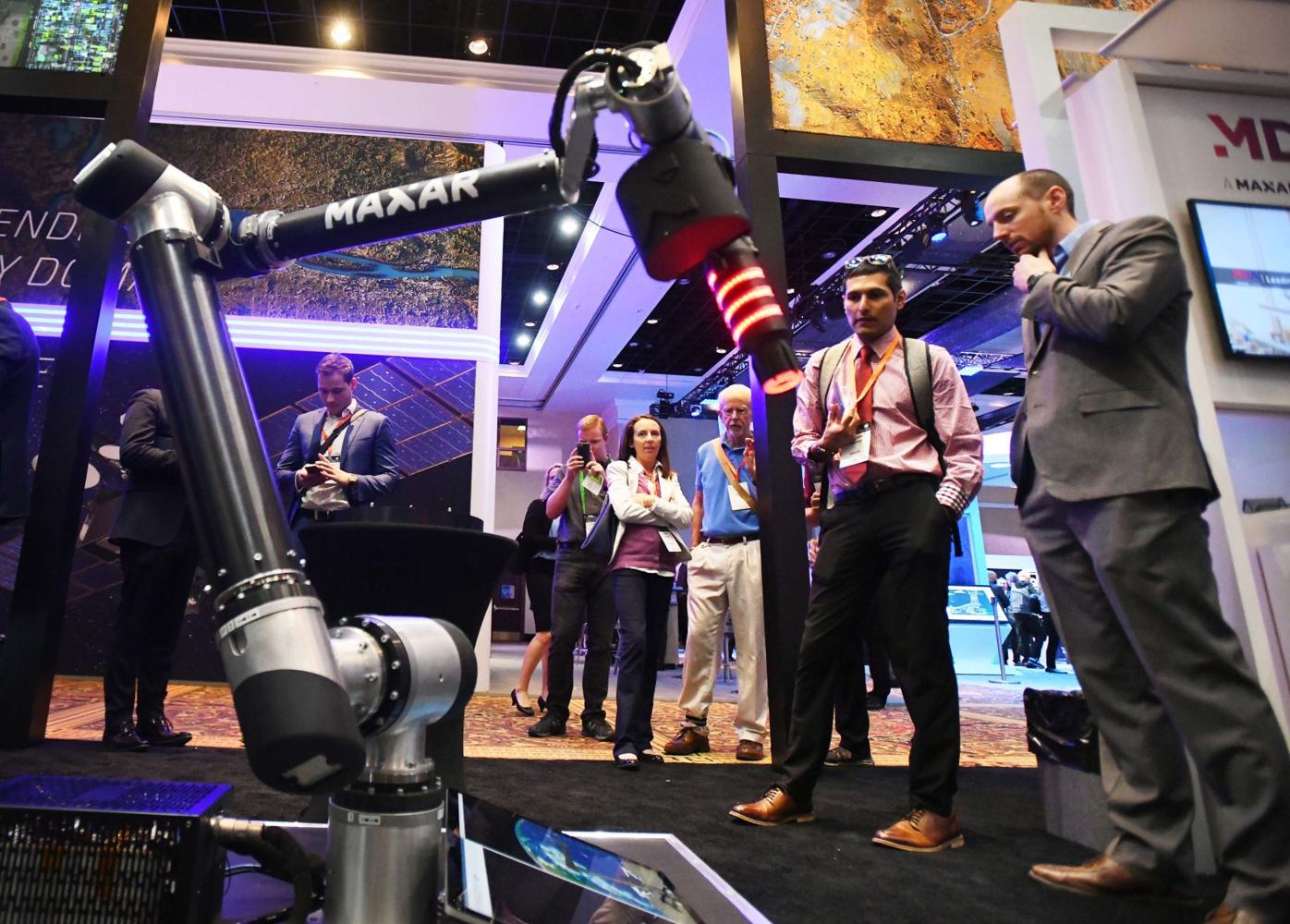 In the exhibit hall, a robotic arm with capabilities to service satellites in space at the Maxar Technologies exhibit garnered the interest of Space Symposium attendees in 2019. The 2020 symposium has been postponed due to the spread of the coronavirus. 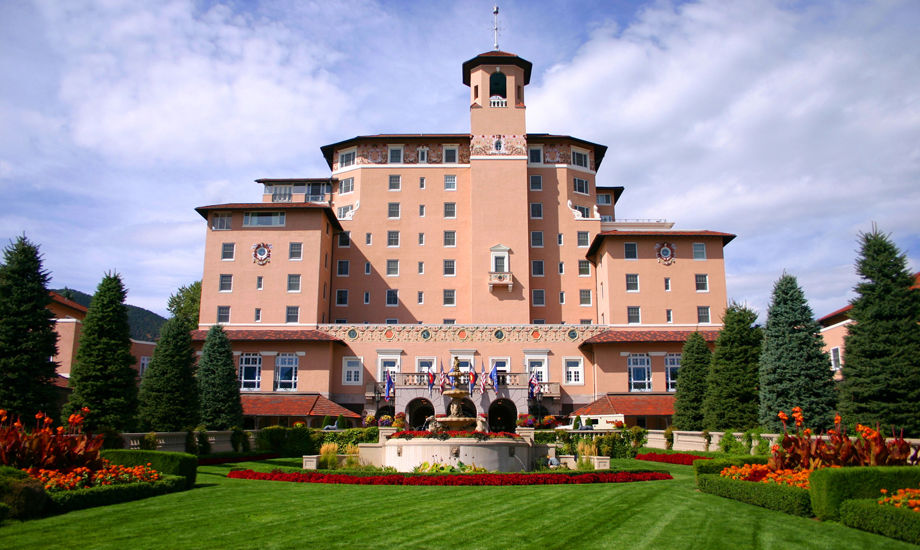 The Broadmoor hosts the annual Space Symposium, which has been canceled due to the spread of the coronavirus. The hotel built a 90,000-square-foot expo hall to accommodate the growing four-day event, which draws 14,000 participants from across the world to Colorado Springs and has a $300 million economic impact.

In the exhibit hall, a robotic arm with capabilities to service satellites in space at the Maxar Technologies exhibit garnered the interest of Space Symposium attendees in 2019. The 2020 symposium has been postponed due to the spread of the coronavirus.

The Broadmoor hosts the annual Space Symposium, which has been canceled due to the spread of the coronavirus. The hotel built a 90,000-square-foot expo hall to accommodate the growing four-day event, which draws 14,000 participants from across the world to Colorado Springs and has a $300 million economic impact.

In a major blow to the area's economy, the Space Symposium — the world's largest space show — has been postponed as a result of the spread of the coronavirus.

“The Space Foundation is working with its partners, The Broadmoor, the City of Colorado Springs, and its members and other key stakeholders to identify future dates and details that will assemble the world’s space community again in Colorado," the Colorado Springs-based Space Symposium said Friday in an email statement.

Local economists say the change, which officials say delivers an immediate hit of $4 million to Colorado Springs expected city sales tax income, will have impacts throughout the region.

“That is just huge. It is a major blow to the tourism industry,” said Tatiana Bailey, director of the University of Colorado at Colorado Springs Economic Forum. “I have done an economic impact study of The Broadmoor and its associated properties and that impact is huge. They are the largest player in the tourism industry, and they are responsible for 60-70% of economic impact for the entire industry here. A lot of that comes from the convention and meeting business."

Colorado Springs Mayor John Suthers said he anticipated the postponement, since the Space Foundation "had no other choice." He called the postponement "a big economic blow to Colorado Springs, but you can't focus on dollars and cents but instead on public health. We have to deal with the reality that this is the biggest single event from an economic standpoint and the ramifications will be felt far and wide."

Suthers said the city expects to lose $4 million from its 2% sales tax, and more from special taxes for road repairs, public safety, trails, parks and open space and the city's tax on hotel rooms and rental cars. The $4 million estimate means the city is forecasting a $200 million reduction in taxable sales related to the symposium.

Work has begun to figure out whether the symposium can take place later this year.

“In the coming days, we will be issuing additional guidance about those steps and the identified path forward. We ask for your patience as that guidance is assembled and conveyed to our partners, attendees, the public, and the space community we are proud to serve," the statement continued.

Former Air Force space boss, retired Gen. Lance Lord, said leaders understand why the symposium is off, but they also mourn opportunities that will be missed.

Kathy Boe, who serves as chairwoman of the Colorado Springs Chamber of Commerce & EDC, said the chamber and business leaders will work in concert with city officials to help business impacted by the lost trade show and corona virus.

"This is a huge economic impact for our city," said Boe, who founded and leads local defense contractor Boecore. "The organization my heart goes out to is the Space Foundation."

At its new headquarters and Discovery Center off Garden of the Gods Road, the foundation had been expanding in recent years. But that effort could slow down after the postponment of the symposium, which is the single largest fundraiser for the nonprofit.

In 2018 tax filings, the most recent year available, the foundation showed revenue of more than $11 million, with more than $6.5 million coming from the symposium.

The symposium draws as many as 14,000 attendees including the planet's top rocket scientists. The symposium has grown so much in recent years that the Broadmoor constructed a massive new exhibit hall to hold it.

“From the beginning, the Space Foundation has valued its stewardship role in assembling the diverse members of the world’s space community," the foundation said. "Those efforts will continue forward as we look toward future assemblies, programs, and activities that expand and diversify the space economy; inspire and educate every generation to take their place in this bold frontier; and, advocate that space has a place for us all."

The gathering is the biggest convention and trade show held annually in Colorado Springs, drawing participants from around the world to The Broadmoor. This year's symposium was set to begin March 30.

The Colorado Springs-based Space Foundation had said much of this week that the show would go on, but the symposium suffered a blow with travel restrictions ordered by the White House in response to coronavirus. A ban that begins Friday cuts out a slew of European nations that planned to send delegations to the annual space gathering.

Companies including Airbus and Airianespace have been among the more prominent exhibitors. Germany and France, both on the banned list, also send large government and military contingents. The four-day meeting brings military, civilian, business and academic leaders from North America, Europe and Asia to Colorado Springs to network, drawing generals, CEOs and industry giants like Elon Musk and Jeff Bezos.

Postponing the symposium comes with major economic repercussions, at least in the short term; the event generates an economic impact in the tens of millions of dollars. The symposium fills up hotels around the Pikes Peak region and also includes a string of parties that fill the coffers of caterers, restaurants and liquor wholesalers.

Kevin O'Neil, who spends $150,000 to host one of those parties for hundreds of space industry officials, said he was "obviously disappointed we are not having the event for the critical mass that results from getting the customer (the federal government) together with industry that allows for a high volume of meetings. It is good for any business to do that much business in one week. We look forward to them (the foundation) rescheduling the event."

Bailey, the economist, worried that the show will hit the wallets of local workers who rely on the annual event.

"I worry about the workers who might be told to stay home; most of them live paycheck to paycheck and this will hurt them directly," she said. "When people aren’t out there spending money in the community, the workers might not be able to make their mortgage payment or pay their rent, they aren’t going out to eat or buying (big ticket items).”

The symposium is just the latest event to be put on hold or canceled as  coronavirus cases spread worldwide. Most major professional and college sports competitions have been suspended or canceled, along with many entertainment events such as the Colorado Springs Philharmonic performances and conferences and meetings that include the South by Southwest event in Austin, Texas, and major business meetings in Denver and across the nation and

Colorado has reported 77 coronoavirus cases and one deaths, an 83-year-old El Paso County woman, while the Centers for Disease Control and Prevention reports more than 1,600 cases and 41 deaths in 46 states and Washington, D.C. The World Health Organization counts nearly 137,000 cases and more than 5,000 deaths in 123 countries worldwide.

Cybersecurity center cancels symposium in Denver due to coronavirus

Return to gazette.com for updates on this story.

- MAP: A look at cases in Colorado.

- Coronavirus vs. the flu: Similar symptoms and the differences.

Gov. Jared Polis, in his fourth press conference of the week over the novel coronavirus outbreak, announced the number of cases is up to 72, with eight people hospitalized and three in critical condition. "It's only a matter of time before we have our first fatality," Polis said.