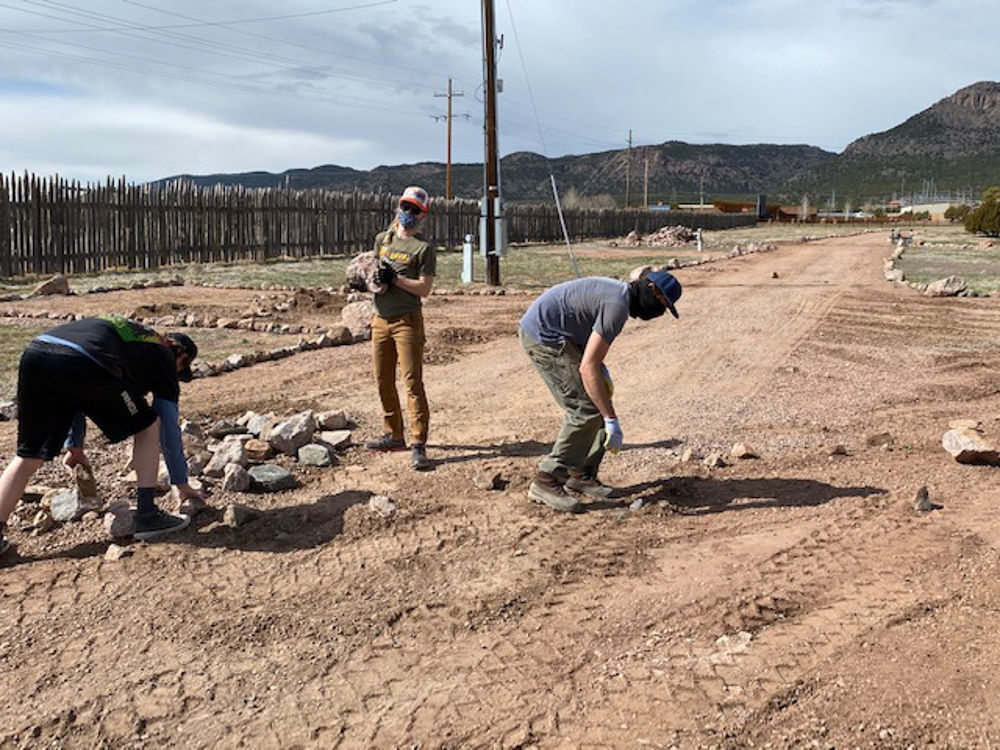 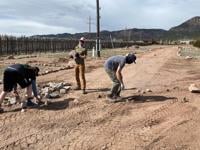 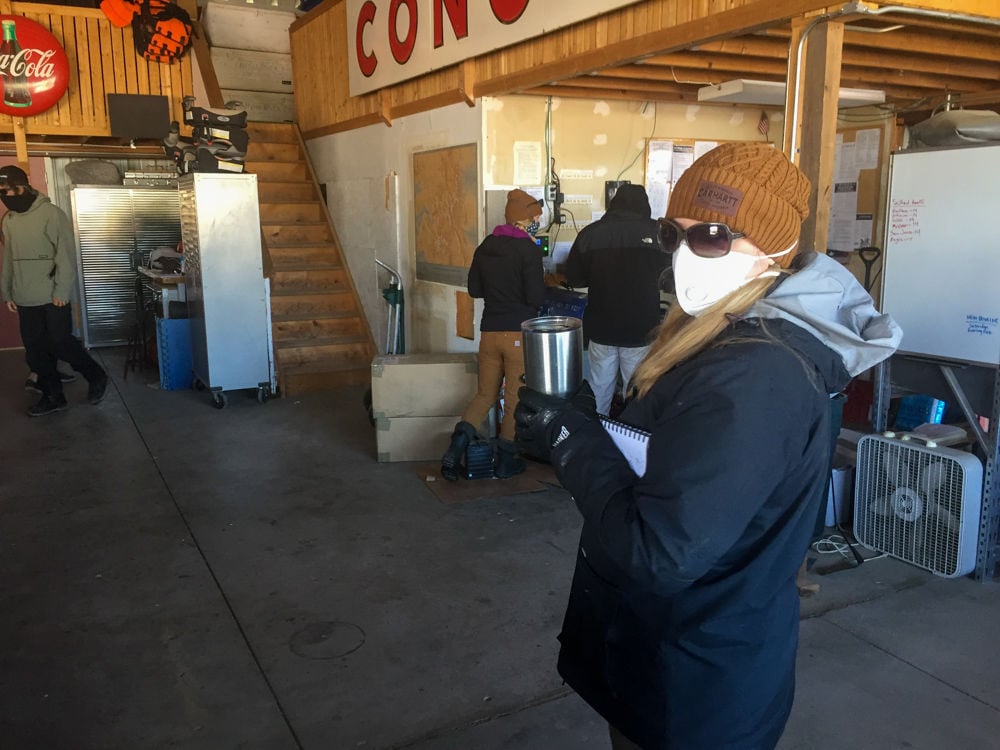 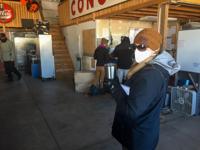 Jessica Smith, operations manager for Echo Canyon River Expeditions in Cañon City, tries to figure out how to manage raft guides while wearing a face mask and drinking coffee. 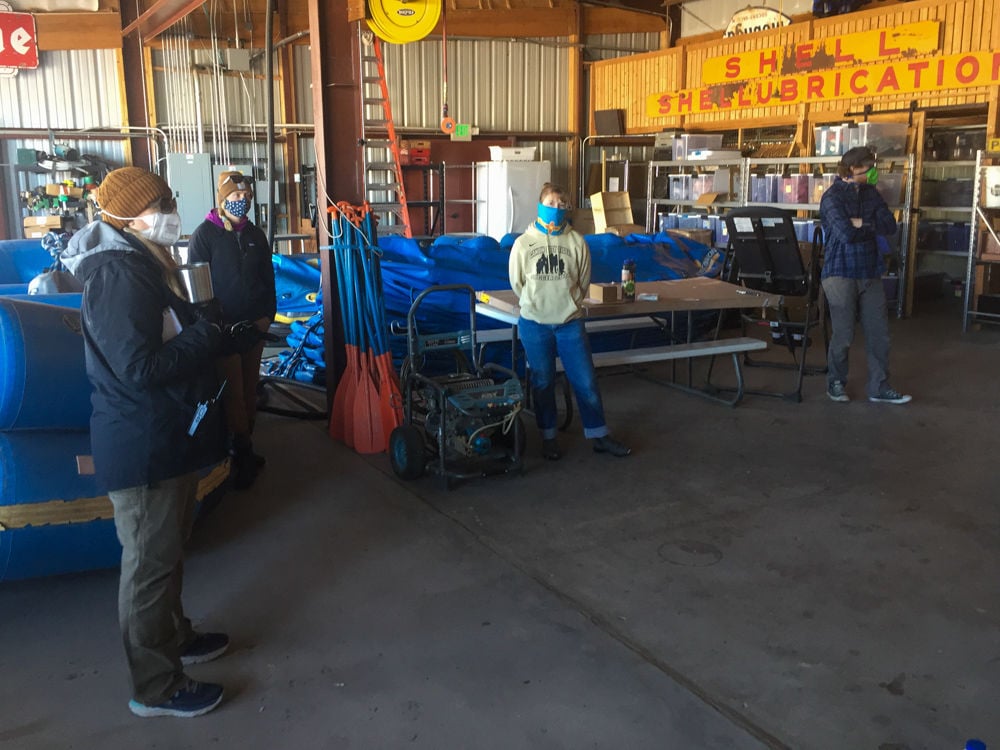 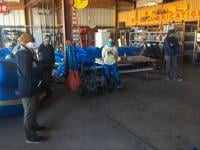 Jessica Smith, operations manager, speaks to raft guides Chloe Alley-Samack, Gillian Hardy and Matt Frederick at Echo Canyon River Expeditions in Cañon City. They were getting ready to clean bathrooms and other high-traffic areas, setting up hand washing stations and distributing cleaning products to locations around the company's complex.

Peggy Gair, public relations and human resource manager for the Royal Gorge Bridge & Park, has high hopes for the tourism season, based on the visitor traffic the attraction has drawn while it has been open only to vehicle traffic across the iconic span.

Jessica Smith, operations manager for Echo Canyon River Expeditions in Cañon City, tries to figure out how to manage raft guides while wearing a face mask and drinking coffee.

Jessica Smith, operations manager, speaks to raft guides Chloe Alley-Samack, Gillian Hardy and Matt Frederick at Echo Canyon River Expeditions in Cañon City. They were getting ready to clean bathrooms and other high-traffic areas, setting up hand washing stations and distributing cleaning products to locations around the company's complex.

Peggy Gair, public relations and human resource manager for the Royal Gorge Bridge & Park, has high hopes for the tourism season, based on the visitor traffic the attraction has drawn while it has been open only to vehicle traffic across the iconic span.

Memorial Day weekend usually means crowded roads, tourist sites and hiking trails in the Pikes Peak region, but this year only the trails remain full as attractions remain closed amid the coronavirus pandemic.

The region's tourism industry instead is preparing for an abbreviated peak season with fewer visitors — and most of them are expected to be drawn from the Colorado Springs area and Front Range, with some traveling from surrounding states. Expect no big crowds at attractions once they do open, staff wearing masks and cleaning public areas much more frequently, and children staying 6 feet away from Santa (instead of on his lap) at the North Pole amusement park.

"This is a summer of unknowns," said Andy Neinas, owner of Echo Canyon River Expeditions, a rafting operator in Cañon City. "I've been doing river rafting for more than 30 years and dealt with drought, fires and the Great Recession, but I never have had so much uncertainty. What will this summer look like? Who knows."

Doug Price, CEO of Visit Colorado Springs, the primary tourism promotion agency for the Pikes Peak region, said he expects a slow and gradual start to this year's tourism season as travelers become comfortable with taking a vacation. Most potential visitors have spent most of the past two months in or near their homes as a result of government restrictions designed to slow the spread of the virus.

" People who are visiting want to do more than stay in their hotel room and order room service," Price said. "It will be a huge step forward to get restaurants open, then we can work on getting attractions open. The state (Colorado Tourism Office) is taking a phased approach — their advertising message is themed 'ready, set, go' based on data and the governor's orders" on what businesses can open.

Much of Colorado's tourism industry has been shut down under orders from Gov. Jared Polis since mid-March, including tourist attractions, restaurants, casinos and ski areas. While hotels weren't forced to close, many local convention hotels — including The Broadmoor and Cheyenne Mountain Resort — shut down after major meetings were canceled. Others that remained open furloughed most of their staff, including the Marriott and Doubletree hotels.

"The entire process likely will take months before all businesses are totally open, and I don't know that gathering large numbers of people in hotel ballrooms (for conventions) will happen this year or not," Price said. He said he'll be " pleasantly surprised" if by fall the restrictions on large group gatherings are up to 1,000, people, which will determine how the Space Foundation will hold its annual Space Symposium, the region's largest convention that has been rescheduled to begin Oct. 31.

Visit Colorado Springs will direct its initial marketing efforts this year at residents of southern Colorado and the Front Range, hoping people will be willing to drive an hour or so to visit attractions in Colorado Springs. Later in the season, the agency will expand its marketing to visitors from adjacent states, including Texas, that have historically sent the most tourists to the Pikes Peak region.

"The average number of passengers on a domestic flight last week was 17, so it is clear that people feel safest in their own private vehicle and that is the market we will go after," Price said. "This will look different from any other summer (tourism season). I remain hopeful we will have half a summer season, so instead of ramping up on Memorial Day we will be ramping up close to July 4."

Cathy Ritter, director of the Colorado Tourism Office, said attracting locals to visit tourist sites represents a major opportunity since many of the state's residents moved here in the past five years. While the office has typically focused its marketing budget on out-of-state visitors, it plans to spend a significant part this summer initially targeting locals, she said.

"A lot of research shows people plan to stay closer to home this year," Ritter said. "We will be paying close attention to traveler sentiment indicators to see when they are ready and willing to travel."

The U.S. Travel Association estimated travel revenue in Colorado during the past two months has declined by more than 80%, or more than $350 million per week, from the same period a year ago. The Washington, D.C.-based industry trade group forecast that overall tourism spending will decline 45% this year, or more than $500 billion, in a study compiled by Oxford Economics.

Another study cited by Price, by Smith Travel Research, forecasts that industry declines will continue through the first half of next year, hitting hotels, airlines, tourist destinations and restaurants. However, the company's forecast indicates that the magnitude of the decline will diminish over time, with just a 12% drop during the first half of 2021 when compared with periods before the virus hit.

"We have a long recovery in front of us. We could end up having a better fall than summer," Price said. Part of the reason spending likely will ramp up slowly is that restaurants and tourist attractions will be able to open at a fraction of their capacity, as low as 30%, to ensure visitors and staff maintain social distancing that Polis has credited with slowing the spread of the virus.

PK Knickerbocker, executive director of the Pikes Peak Country Attractions Association, a trade group for the region's tourism venues, said some of the group's members "are really scared about the tourism season. We started the year expecting a banner year and now instead they had to cancel or delay orders for merchandise because they don't know when they can open."

Most attractions likely will operate at between 30% and 50% of visitor capacity, with many selling tickets for a specific time when the visitor can enter the business, much like a restaurant reservation, Knickerbocker said. Many will restrict visitors to a one-way flow for entering and leaving the attraction to maintain social distancing and minimize crowds developing. Visitors waiting in line also will have to keep at least 6 feet between each person.

Knickerbocker is optimistic visitors are planning to travel to the Pikes Peak region. She gets frequent calls from those planning vacations about when attractions are expected to open, a question she can't yet answer. But she's not expecting a "banner season" anymore, and believes the industry is headed for a rough year, especially if a second wave of virus outbreaks hits the region and state in the fall.

Rob Hefner, general manager of the Manitou Cliff Dwellings, a collection of relocated ancestral Pueblo dwellings, museum and gift shops in Manitou Springs, expects he may have to turn away visitors based on capacity reductions needed to maintain social distancing. He believes visitors will flock to attractions after they open in the same way locals have filled local parks and trails with larger-than-expected crowds.

"I think we will be busy because last year was a record season and we were on track through March 21 to top that," Hefner said. "I'm hoping that the numbers (of visitors) will grow as the summer goes on. My bigger concern is for the fall, when kids go back to school and our visitors then are older." He worries those visitors may be more concerned about traveling since they are more at risk from the virus.

Peggy Gair, public relations and human resource manager for the Royal Gorge Bridge & Park, has high hopes for the tourism season, based on the visitor traffic the attraction has drawn while it has been open only to vehicle traffic across the iconic span. With the park fully reopening this weekend, she expects a gradual return of visitors as they become more comfortable with health and safety efforts by Royal Gorge and other attractions.

"The first month after we open, the park will be wait and see, but I hope visitors will flock right back," Gair said. "Given the experience we have had with cars (driving over the bridge), I expect visitors will come back and come back strong. We were having a very good season even through spring break," when state restrictions closed schools, restaurants and many other businesses.

Cave of the Winds owner Grant Carey isn't sure what to expect once the attraction opens, but said he will have to cut visitor capacity from 2,800 to 3,000 a day to 300 to 400 to maintain social distancing. That's because each cave tour can have no more than eight participants, and he plans to reduce operating hours to allow more time for his staff to clean anything visitors might touch.

"I'm expecting this season to be a lot like the season after (the) Waldo Canyon (fire). Demand will build gradually and likely will exceed our capacity," Carey said. "I worry about about the late summer if there is a resurgence (of the virus). I don't know how you can be optimistic with so much uncertainty. No one has ever planned for this kind of situation; there are no models for this."

"I have to think people are scared and hurting because many are out of work. It's hard to expect a good year with both of those (factors) at work. But we are an industry where people can have fun and enjoy themselves and we haven't had much of that lately. I think people are anxious to go out and do something."

The two groups might have been on their own with little help from the Colorado Tourism Office after state budget writers proposed gutting the agency's funding as part of plans to slash more than $3 billion from the state's 2020-21 budget. After industry officials pointed to a $2 billion annual loss of tourism spending when tourism marketing was eliminated in the 1990, the legislature's Joint Budget Committee instead proposed cutting tourism advertising by half to $10 million.

Gov. Jared Polis issued draft restaurant reopening guidelines on Tuesday that, although still a work in progress while the state gathers stakeholder feedback, provide insight into what the new normal may look like when eating out.