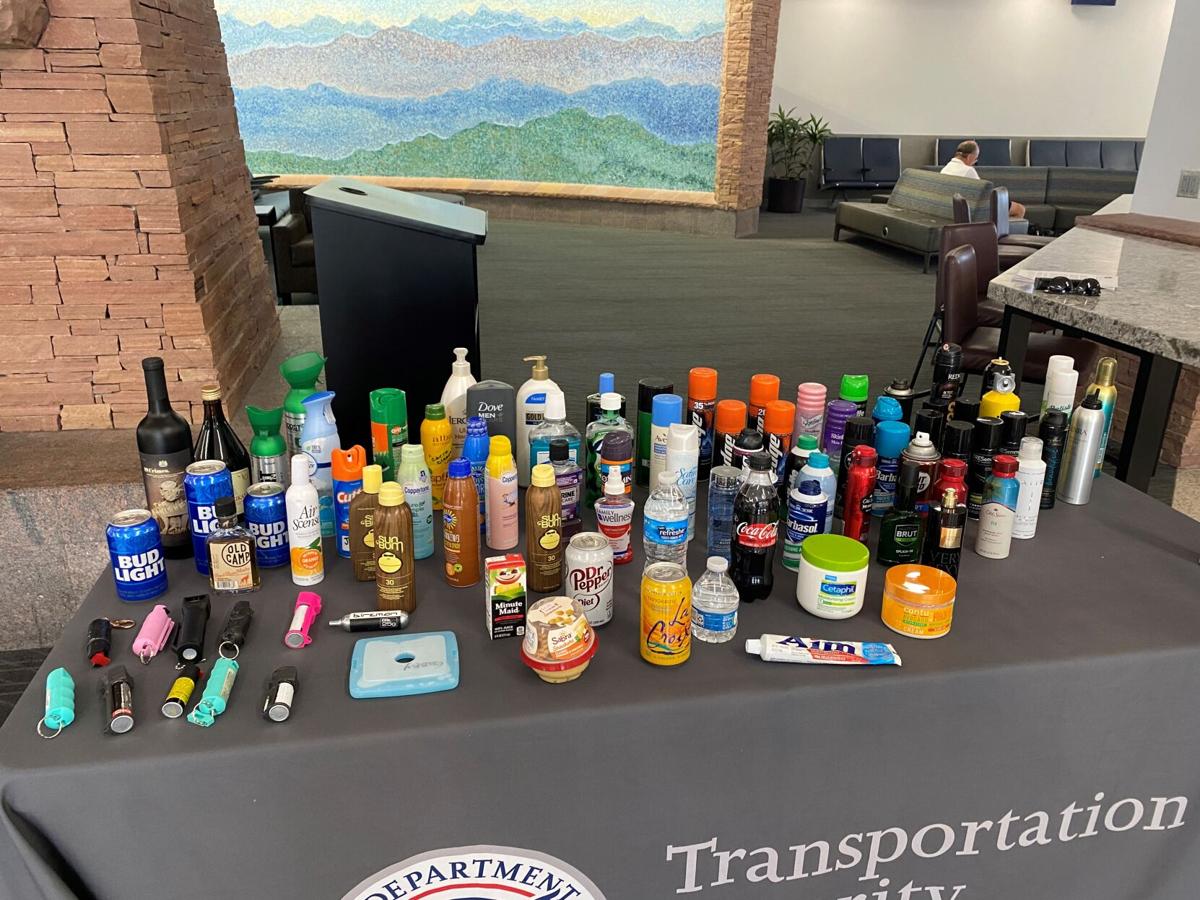 Items left at the security checkpoint of the Colorado Springs Airport in the past week by passengers because they are prohibited to be placed in carry-on baggage are displayed on a table. 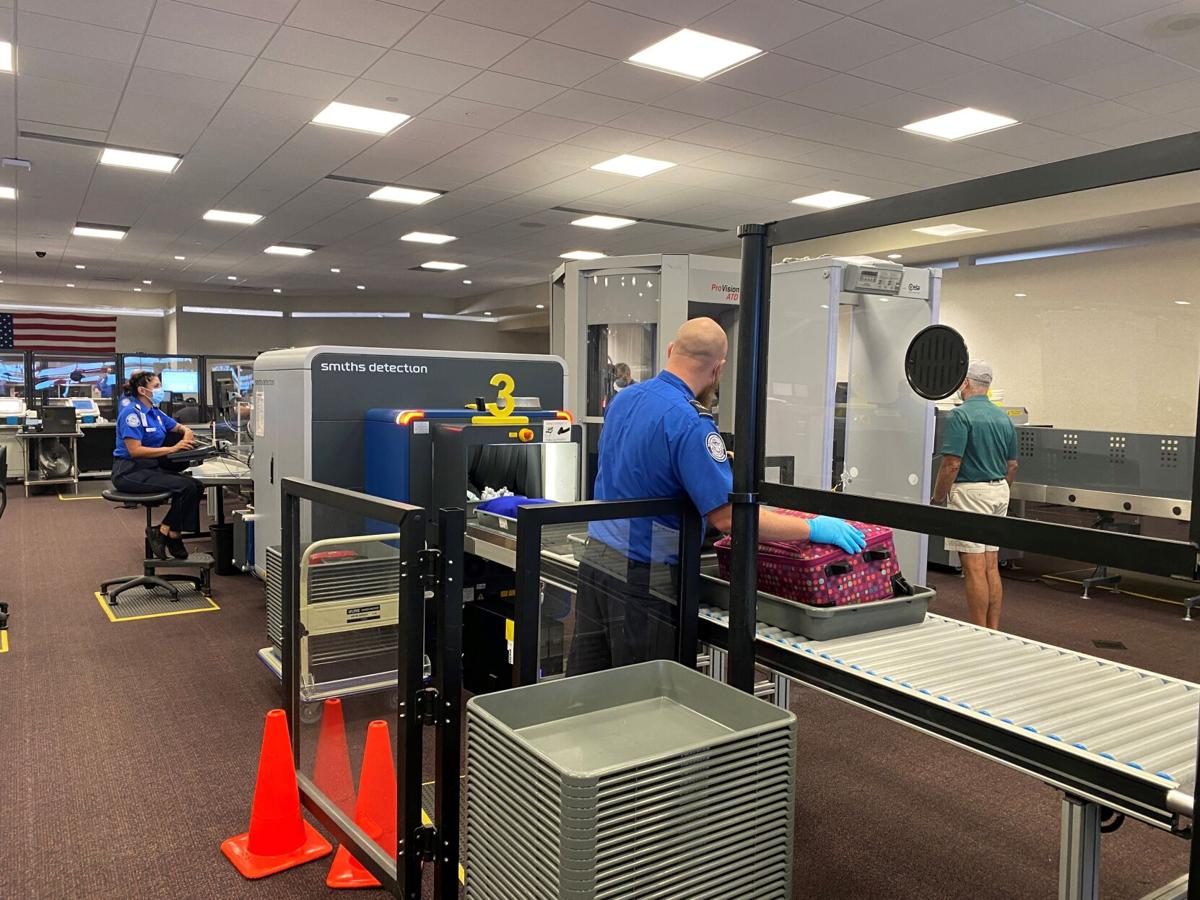 A U.S. Transportation Security Administration agent demonstrates how to move and enlarge images from a computed tomography scanner similar to one installed earlier this year at the Colorado Springs Airport.

Items left at the security checkpoint of the Colorado Springs Airport in the past week by passengers because they are prohibited to be placed in carry-on baggage are displayed on a table.

A U.S. Transportation Security Administration agent demonstrates how to move and enlarge images from a computed tomography scanner similar to one installed earlier this year at the Colorado Springs Airport.

Crowds moving through the security checkpoint at the Colorado Springs Airport are expected to continue growing for the rest of the summer, according to officials from the airport and the U.S. Transportation Security Administration.

Passenger screening numbers are now more than 25% higher than during the same period in 2019 and are expected to continue growing during the rest of the peak summer travel season, said Larry Nau, the agency's federal security director for Colorado Springs. The agency screened 26,700 people last week, up from 21,300 during the same week in 2019; that ranks as the nation's 12th fastest air travel recovery rate amid the pandemic, which crushed travel last summer.

"Colorado Springs is know for its proximity to world class outdoor recreational opportunities and is prime vacation destination," Nau said in a news release. "Because we anticipate that the volume of travelers will remain high throughout the summer, we are asking travelers to come to the airport early," especially during peak travel periods. The agency generally recommends travelers arrive at any airport two hours before their flight is scheduled to depart.

The airport's security checkpoint is busiest from 5-7 a.m., 11 a.m.-1 p.m. and 3-5 p.m., especially on Sunday, Monday, Thursday and Friday. Peak wait times at the checkpoint have ranged from 16-25 minutes during the weeks ending July 5, 12 and 19, while the average wait times during the same period have ranged between 4.7 and 6.5 minutes, so travelers should expect significantly longer waits during peak travel periods.

The agency has tried to speed up how quickly passengers make it through the checkpoint by installing a new computed tomography scanner in one of the checkpoint's three lanes. The scanner uses a sophisticated algorithm to generate a three-dimensional image of  the contents of carry-on bags in hopes of reducing the number of bags agents must check by hand, said Lorrie Dankers, a TSA spokeswoman.

The agency may install a second CT scanner at the Colorado Springs Airport as passenger volumes increase, Dankers said. Passenger numbers have surged at the airport since Southwest Airlines expanded to Colorado Springs in March with 13 daily nonstop flights to Chicago, Dallas, Denver, Las Vegas and Phoenix. The number of passengers that boarded outbound flights in May surged to a nearly three-year high and the June total is expected to be even higher.

TSA also is trying to add more agents to the Colorado Springs Airport and other airports, Dankers said. The agency has posted both part- and full-time jobs on its website with a starting wage in Colorado Springs of $16.77 an hour and a $1,000 signing bonus that is paid in two installments upon reporting to work and after the first year of work. The agency is also recruiting security assistants, program analysts and security specialists nationwide.

TSA recommends travelers review the list of items they can and cannot have in carry-on bags at www.tsa.gov/travel/security-screening/whatcanibring/all or send questions via Facebook or Twitter. The agency limits all liquids in carry-on bags to 3.4-ounce containers, but allows a 12-ounce container of hand sanitizer or any quantity of hand wipes. Travelers also can enroll in TSA's PreCheck program for faster screening during which they don't have to take off shoes, belts and light outwear. The program has a $85 fee for a five-year membership.