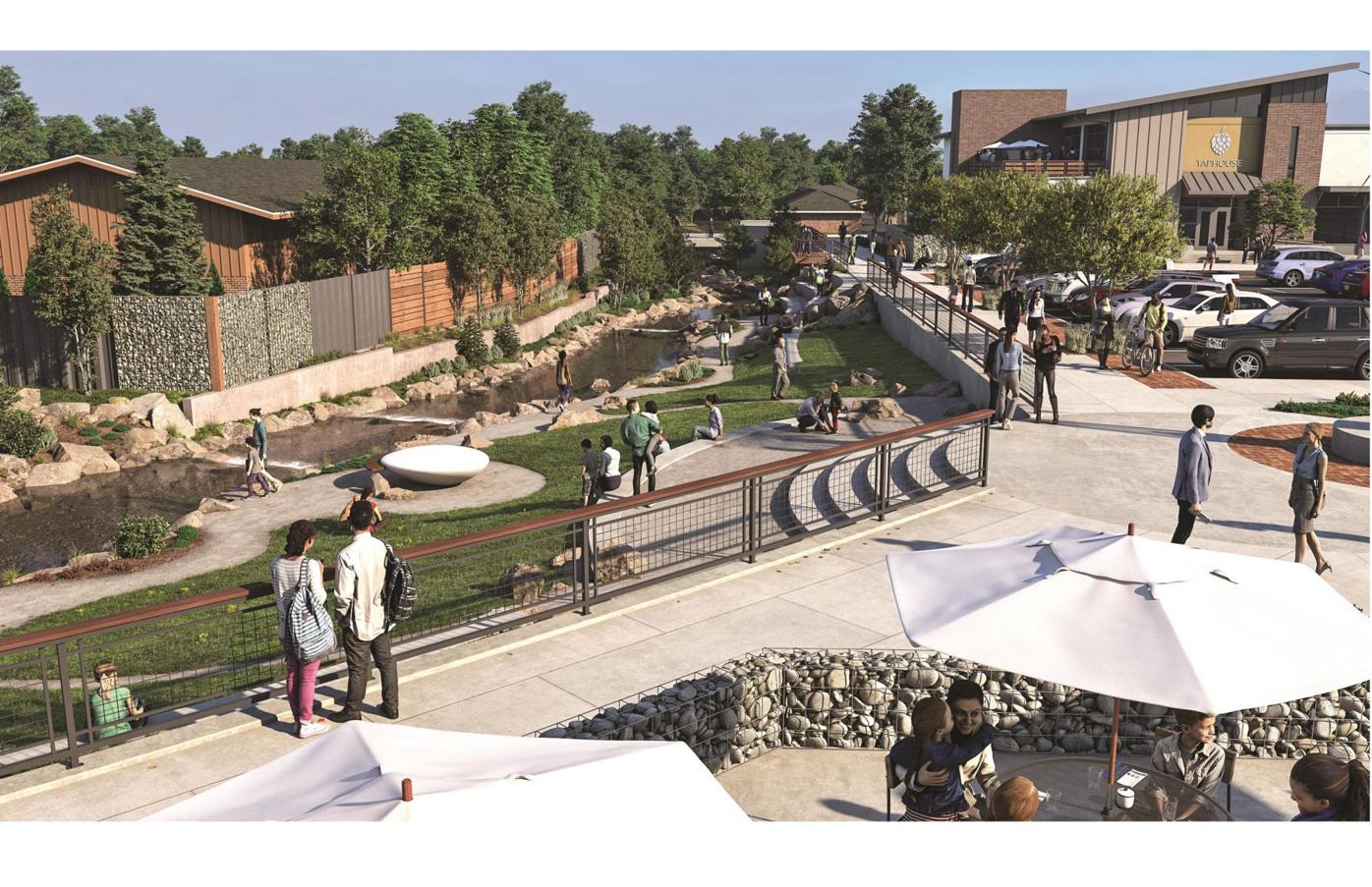 A rendering shows a pedestrian and bike-friendly sidewalk, seating areas, landscaping and other features along an enhanced Cheyenne Creek, which developers say will be the signature amenity for the new 50,000-square-foot Creekwalk shopping center planned as part of the South Nevada Avenue redevelopment area. 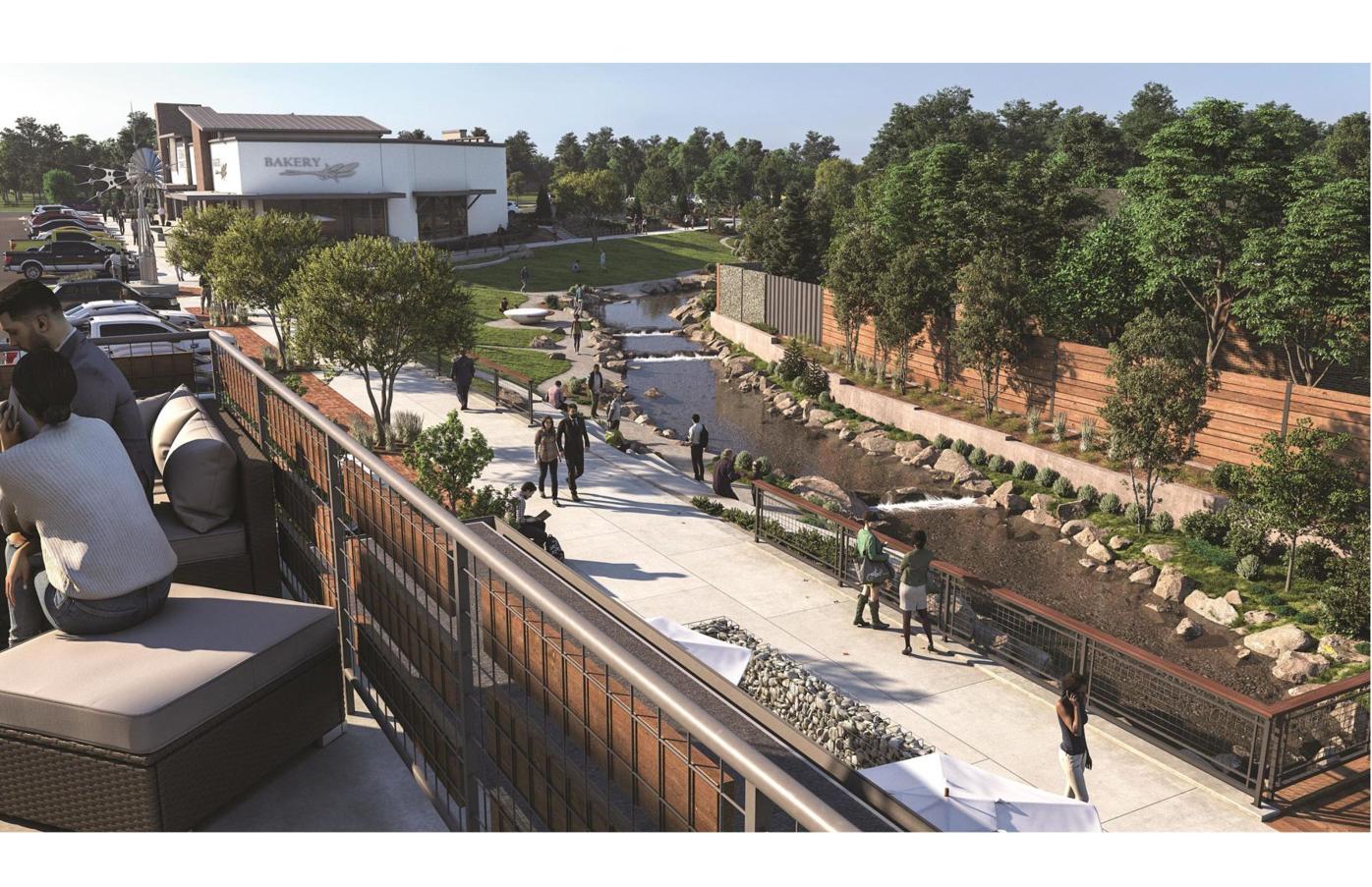 The 50,000-square-foot Creekwalk shopping center planned as part of the South Nevada Avenue redevelopment project will feature an upgraded area along Cheyenne Creek, with a wide sidewalk for pedestrians, trees and sculptures, among other features.

A rendering of the Creekwalk shopping center shows an aerial view of the five-building, 50,000-square-foot shopping center planned northwest of Nevada Avenue and Cheyenne Road. The project is part of the South Nevada and South Tejon redevelopment area. 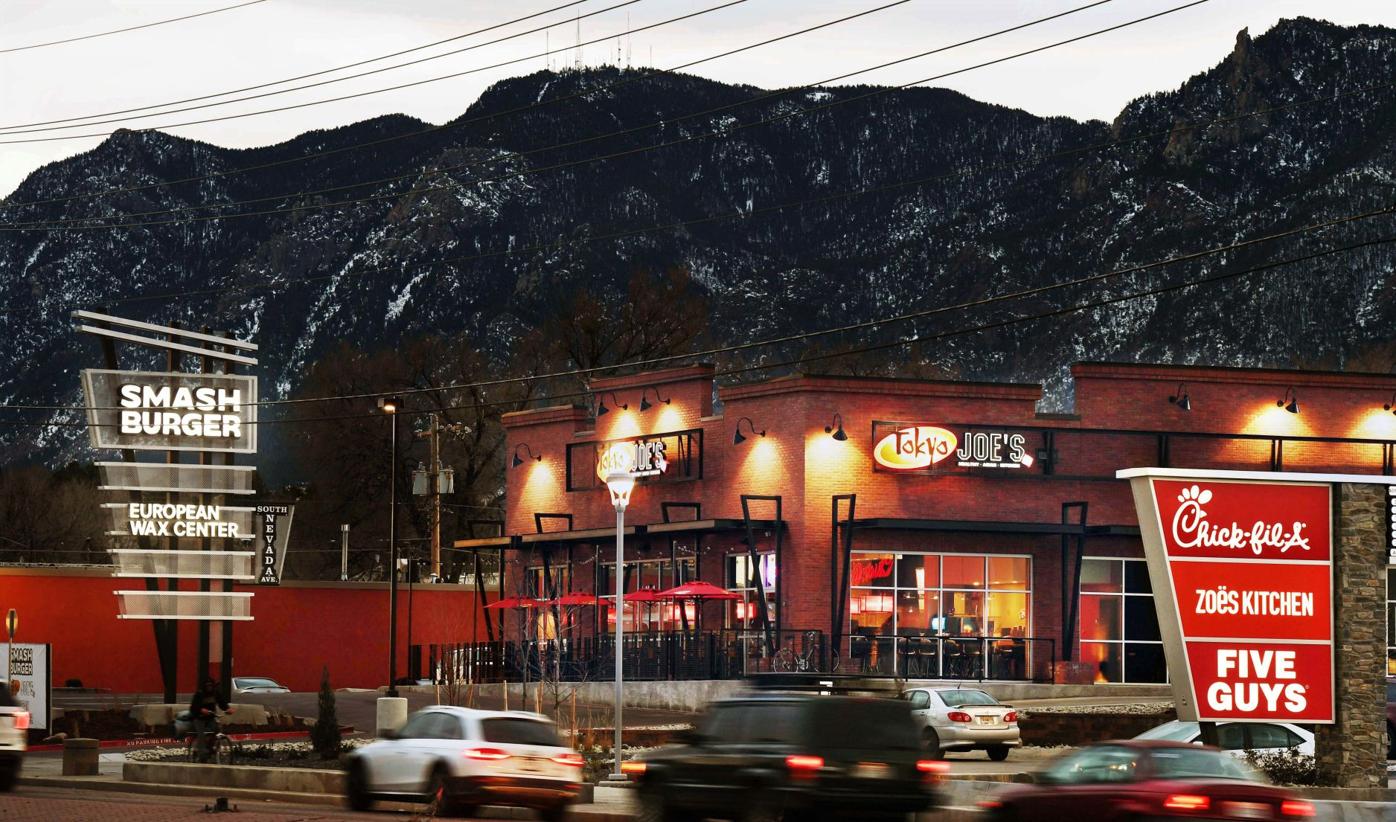 The rundown motels that were torn down on South Nevada Avenue have given way to numerous new buildings and businesses. Cars during rush hour drive past some of the businesses that have taken the motels’ place.

A rendering shows a pedestrian and bike-friendly sidewalk, seating areas, landscaping and other features along an enhanced Cheyenne Creek, which developers say will be the signature amenity for the new 50,000-square-foot Creekwalk shopping center planned as part of the South Nevada Avenue redevelopment area.

The 50,000-square-foot Creekwalk shopping center planned as part of the South Nevada Avenue redevelopment project will feature an upgraded area along Cheyenne Creek, with a wide sidewalk for pedestrians, trees and sculptures, among other features.

A rendering of the Creekwalk shopping center shows an aerial view of the five-building, 50,000-square-foot shopping center planned northwest of Nevada Avenue and Cheyenne Road. The project is part of the South Nevada and South Tejon redevelopment area.

The rundown motels that were torn down on South Nevada Avenue have given way to numerous new buildings and businesses. Cars during rush hour drive past some of the businesses that have taken the motels’ place.

A shopping center, hotel, apartments and other improvements along and near South Nevada Avenue and South Tejon Street are moving closer to launching construction as two development groups target 2021 for completion of a majority of their upgrades.

Those projects will include trails, sidewalks, sculptures and other enhancements along stretches of a beautified Cheyenne Creek that developers expect will become signature amenities to help attract shoppers, restaurantgoers and others to the area.

“We did not need COVID-19, but it could be a lot worse if it were a recession,” said developer Danny Mientka of The Equity Group in Colorado Springs, who targeted the area for redevelopment years ago and plans the Creekwalk shopping center northwest of Nevada and Cheyenne Road.

“If it were an ’09 kind of credit crisis, financial crisis,” he said, “that is something that is just much more destructive to new construction or development in general.”

The South Nevada and South Tejon corridors were targeted for redevelopment years ago by city officials, community leaders and business people.

South Nevada, in particular, gained a reputation over several decades as a seedy area because of its collection of 1950s-era motels, used-car lots and pawnshops. Crime was common along the corridor, which also was frequented by transients, city officials have said in the past.

Nearly five years ago, the Colorado Springs City Council echoed a consultant’s finding of blight along and near the South Nevada corridor, several blocks south of downtown.

The council designated 100 acres — bounded roughly by Interstate 25 on the north, Cheyenne Road on the south, Wahsatch Avenue on the east and Tejon on the west — as an urban renewal district.

The urban renewal designation allowed increased sales and property tax revenues generated by development in the district to be set aside to fund utility work, sidewalk improvements and other upgrades. That money acts as a financial incentive to encourage developers to invest in the area.

Since the urban renewal designation, three development groups have tackled portions of the South Nevada and South Tejon district.

One group, Harder-Diesslin Development, has completed the Shoppes on South Nevada, southwest of Nevada Avenue and Navajo Street. The small retail center, which replaced a single-story motel and an auto repair business, is home to Natural Grocers, Five Guys Burgers and Fries, Zoës Kitchen and Chick-fil-A.

Mientka’s 50,000-square-foot, five-building Creekwalk retail center is one of the next big phases of the area’s redevelopment.

Creekwalk is planned for nearly 8 acres west of a McDonald’s restaurant and Wells Fargo bank building, which aren’t part of Mientka’s project. His company has razed roughly two dozen small office and residential buildings at the site and undertaken extensive utility upgrades to prepare the property for construction, Mientka said.

At this point, Creekwalk was supposed to have been further along; last year, Mientka had anticipated the opening of stores and restaurants for the fourth quarter of this year.

But obtaining regulatory approvals from a handful of government agencies for improvements along Cheyenne Creek and utility work for the Creekwalk property proved complex and time consuming, Mientka said.

At the same time, completion of a multistreet roundabout at Cheyenne Boulevard, South Cascade and East Ramona avenues and Tejon, west of Creekwalk, delayed the closing of Cheyenne Road that Mienkta said he needed to undertake site development of his project.

Construction of four of Creekwalk’s five buildings should begin in July, with completion expected in early 2021, Mientka said. Initial store openings are expected in February and March, he said.

Mienkta said he’ll hold off on the shopping center’s fifth building to ensure that leasing takes hold at the other buildings. One Denver-area restaurant chain that has locations in Colorado Springs, for example, has delayed signing a lease at Creekwalk, but remains interested, he said.

“COVID took a pause,” Mientka said of the chain. “They had to really focus on all their established restaurants and the procedures necessary to deal with the virus. So we agreed to put the conversation on hold.”

Other tenants have committed to Creekwalk and more are on the way, Mientka said.

Among them: Nékter Juice Bar, a local franchise of the California-based chain; The Oak Barrel, a local fine wine and spirits retailer; Veda Salon and Spa, which will relocate from the Broadmoor Towne Center shopping center; an Orange Theory fitness center; and Pacific Dental Services.

In addition to the Denver restaurant chain still eyeing Creekwalk, Mientka said he’s talking with the operator of a sit-down breakfast concept that has multiple locations. He also expects to finalize a lease for an operator of a bistro restaurant at Creekwalk that will have creekside dining.

The “creek” in Creekwalk is a centerpiece of the shopping center, Mientka said.

A renovated east edge of Cheyenne Creek will feature a 10-foot-wide sidewalk for pedestrians and bicyclists, sculptures by famed local sculptor Star Kempf and extensive landscaping, while new decorative retaining walls will flank the west side.

“There isn’t anything like it in the city,” Mientka said. “You have to go to Vail or Salida or Breckenridge to find any kind of retail development along a setting like we’re going to produce.

“It’s hidden right now behind all (the buildings) that we’ve demolished and uncovered,” he said. “We’re going to bring it to life. It really is a really special, one-of-a-kind feature that will make the shopping center a destination in and of itself.”

Like Mientka, Guadagnoli targeted the South Nevada and South Tejon area for redevelopment years ago and purchased much of his land before the City Council’s urban renewal designation. His project also will feature a trail system along Cheyenne Creek, pedestrian bridges, lighting and landscaping.

Unlike Mientka, Guadagnoli’s project includes a smattering of housing to go with commercial components.

The residential projects are expected to be finished by the end of 2021.

On the commercial side, Guadagnoli’s group has completed an 8,800-square-foot retail building at South Nevada and Ramona avenues that’s occupied by Tokyo Joe’s, Smashburgers, European Waxing Center and an AT&T store.

His group also opened the Prime 25 steakhouse in a remodeled building at 1605 S. Tejon and has launched a renovation of another building at 1515 S. Tejon.

The cornerstone of Guadagnoli’s project continues to be a hotel on South Tejon, which is expected to begin construction this year and be competed 15 months later, O’Sullivan said. That means it could open in late 2021 or early 2022.

The hotel’s size and brand have evolved since it was announced a few years ago.

It’s now planned for 160 rooms; earlier proposals called for 110, 135 and 144 rooms. Also, a proposal submitted to city planners last fall envisioned a seven- to eight-story building; residents of the nearby Ivywild neighborhood, however, objected to the height and the hotel has been scaled back to five stories. That design is subject to change.

The hotel also will be “double loaded” — rooms on both sides of a hallway, which allows for an increase in the number of spaces even as the building is lower in height.

The hotel’s brand also has been in flux. In February, Guadagnoli and O’Sullivan told the Urban Renewal Authority the hotel would be a Marriott. But discussions still are taking place with another brand and nothing is final on what name the hotel will carry, O’Sullivan said.

Whatever its brand, the property will have an upscale look and feel, with rooms of more than 400 square feet and a restaurant, making it comparable to an AAA-rated four-diamond hotel, said Perry Sanders Jr., a Colorado Springs attorney.

Sanders and Florida attorney John Goede, who co-own The Antlers and Mining Exchange hotels in downtown, are partnering with Guadagnoli on his lodging project.

“We think there’s a market for people to enjoy larger room sizes,” Sanders said. Some national news stories in recent years have estimated that hotel rooms average 330 to 350 square feet.

Like Mientka’s shopping center, the hotel’s proximity to nearby Cheyenne Creek, along with being midway between downtown and The Broadmoor hotel and near Interstate 25, will become major selling points that will help attract guests, Sanders predicted.

“It’s got a lot of desirable qualities,” he said. “We think the neighborhood’s a fantastic neighborhood, and we just think the amenity of the creek is exceptional and we intend to spend a whole bunch of money improving that public feature.”

A tiny, boarded-up diner on West Cimarron Street that over the years had survived a fire and a murder got hauled away last weekend, representi…